The fish-themed show tune will become reality when the New York City-themed SEA LIFE Aquarium opens in the American Dream mall in New Jersey next year, welcoming visitors with an underwater Times Square and its ubiquitous fishy billboards.

“I’m hoping kids walk away with a sense of real excitement and wonder about the diversity of aquatic life,” Rich Weddle, the aquarium’s curator, told Travel + Leisure. “I’d really like to see them get engaged in the exhibits and have [an] appreciation for the animals. When they get exposed to conservation messages later, they’ll resonate with them so much more strongly.”

But these aquatic creatures won’t be housed in just any ordinary tanks.

Participate in rush hour (or the rush hour of the ocean) with a train ride to the fresh water exhibits, complete with a motion activated audio warning visitors to “stand clear of the closing doors” — complete with an exaggerated New York accent, of course. There’s a jellyfish dance club modeled after New York’s legendary Studio 54, and red bellied piranhas who are ostensibly “the Wall Street wolves of the sea.”

Later, take a stroll down Shark Fish Avenue where you can window shop with all the colorful fish displayed in shop windows.

“You cannot go to a city under the sea without wanting to window shop,” Julie Estrada, a spokeswoman for Merlin Entertainments, the owner and operator of the aquarium, told Travel + Leisure. “Bonus: you don't have to spend money there, you don't have to buy anything."

The aquarium will open in the American Dream complex in the spring, and is just one of many attractions coming to the long-awaited mega mall in East Rutherford, NJ. Last month, the indoor Nickelodeon Universe theme park opened and soon, the DreamWorks Water Park will open, which organizers have said will be North America’s largest indoor water park.

In December, visitors will be able to ski and snowboard indoors at the Big Snow and in March, luxury shopping will beckon, helmed by stores like Hermès, Saks Fifth Avenue, and Tiffany & Co. 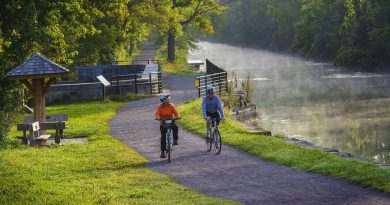 You Can Now Walk or Bike From New York City to Canada, Thanks to This New 750-mile Trail

Why Qantas vaccine rule may not matter for international flights