Tommy Caldwell and Kevin Jorgeson made history in 2015. In 19 gruelling days, the pair free-climbed the Dawn Wall on Yosemite National Park’s staggeringly enormous El Capitan for the first time. They spent those days inching their way up 915m of vertical granite; they spent the nights sleeping suspended far above the ground on tiny, portable platforms.

Portaledges are pretty simple bits of kit. Essentially hanging cots, they measure 2m by 1m and are designed to hang suspended from a cliff face, creating a portable sleeping platform. They’re relatively new on the climbing scene – back in the Seventies, the gnarly climbers who flocked to Yosemite would use metal beds they had liberated from the park’s campsites to rig up homemade versions (if that sounds scary, prior to this most people attempting multi-day climbs just used hammocks). Things have vastly improved since then, and modern big wall climbers take light, portable and sturdy ’ledges, allowing them to stay at altitude for days or weeks at a time.

A head for heights and a sense of adventure may be essential for a night sleeping on the edge, but pro climbing skills aren’t. Eddy Young, of Young’s Adventure Solutions, takes daring sleepers on cliff camping adventures on Dorset’s prehistoric coast, abseiling down to a portaledge suspended above the sea. Dinner and breakfast are even included, and sent down by ropes – it’s like a B&B for the adrenaline-addicted.

Eddy is absolutely the right person for this rather unique job. I’m not sure I’d trust many people I’d just met to lower me off a cliff face, completely at their mercy, but he exudes skill-fulness and calm. Once our campsite in the sky was set up, Eddy took us to a vantage point from where we could just make out a tiny, cheerfully bright red platform suspended on the cliff side. Stretching away beyond it was the glorious Swanage coastline, its craggy rock topped with acres of rolling grass. And far below the platform was the crashing, roaring ocean. I tried to banish the thought of creaky old canvas camp beds from my mind. 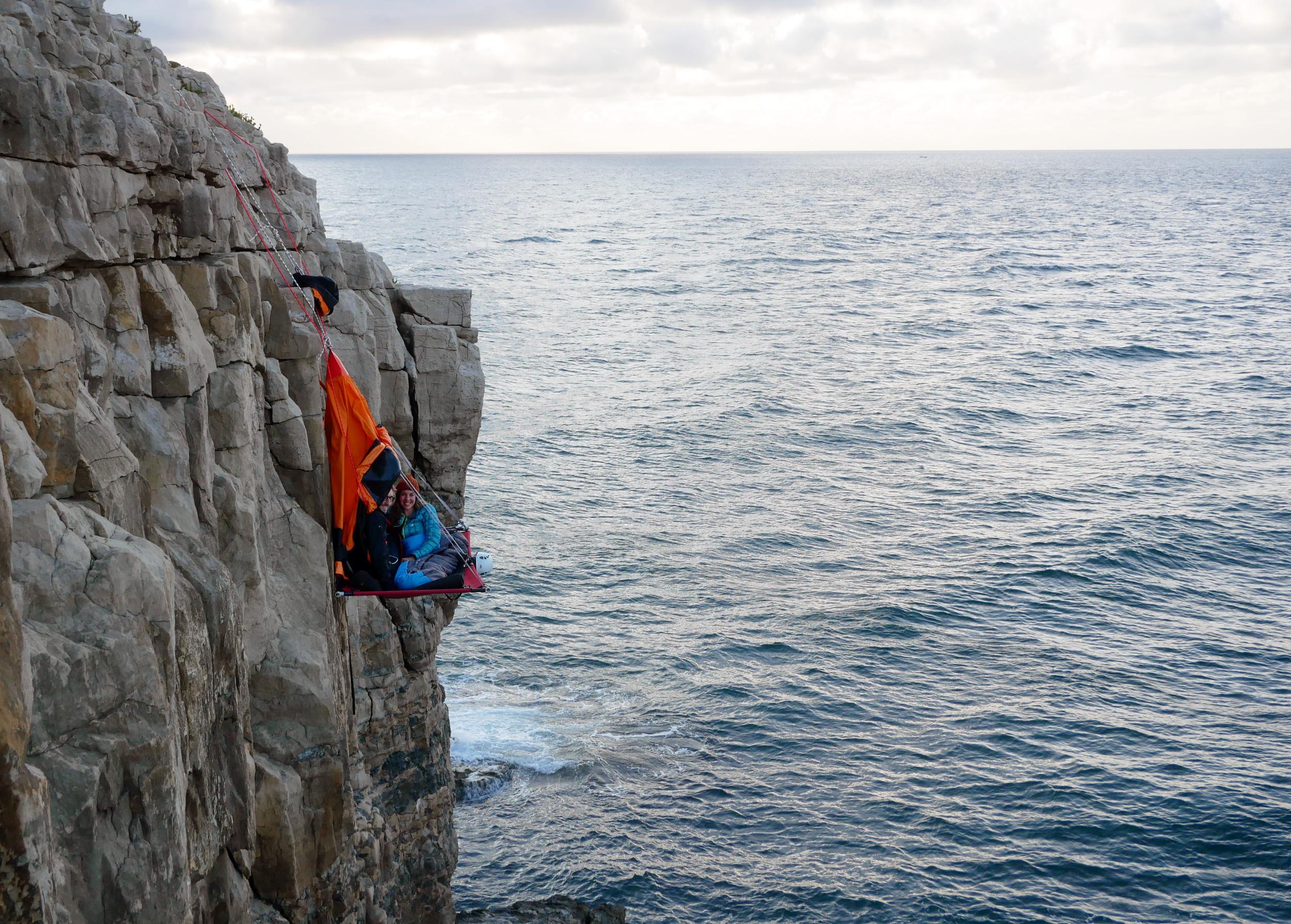 And then, it was show-time. Eddy helped me to climb over the cliff edge and abseil down to the platform, a few metres below. Portaledges are not designed for standing, and feel pretty precarious when you’re on two feet. Once you sit or lie down, though, they’re actually pretty comfortable – far more so than camping on the ground, as you’re cushioned by air instead of hard earth. Ropes suspended from the portaledge’s four corners kept it stable, but I remained very reassured by the taut rope on my harness which connected me to the safety of the world above.

Eddy immediately abseiled down to check we were comfortable – his whole approach was so relaxed that I found myself relaxing, too, enough to stop clinging to the rope and to realise that sitting in the middle of cliff face is a pretty incredible vantage point. Guillemots and seagulls dipped and swerved around us and we had a front-row seat for the glorious sunset.

The sky was tinged with rich pinks and purples when Eddy appeared again, this time with a delicious hot dinner from a local deli. 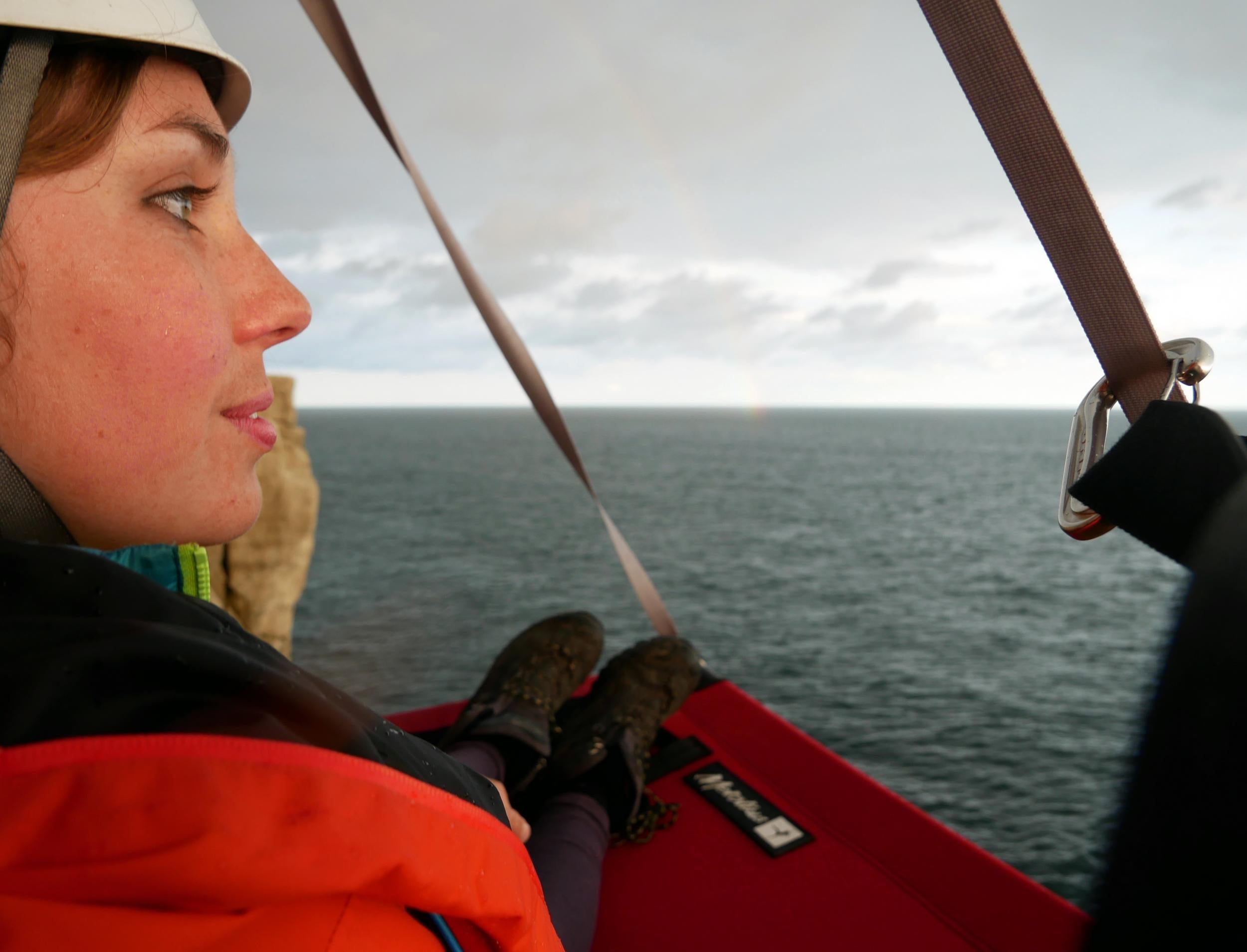 At this point I realised I’d forgotten to ask a rather fundamental question – how do you pee when you’re wearing a harness, suspended from a cliff? Hardened climbers like Caldwell and Jorgesen just pee off the edge and carry poo bags that then have to complete the rest of the climb with them. Eddy had slightly easier options – a bucket, or a climb back up onto the cliff. I went for the latter. I couldn’t face the bucket.

I was dreading nightfall, but my brain had decided it didn’t have to worry about threats it couldn’t see in the darkness. We could have been camping anywhere, except for the never-ending grumble of the sea below and the incredible spray of stars in the sky above. Sleep came surprisingly easy, although I did wake with a start a few times, reaching out a hand to feel how close the edge was (terrifyingly close).

The friendly light of dawn woke us up, followed shortly by Eddy, who lowered down bacon rolls, orange juice and hot chocolate. I don’t think I’ve ever enjoyed a breakfast more, or experienced it in a stranger or more wonderful location. 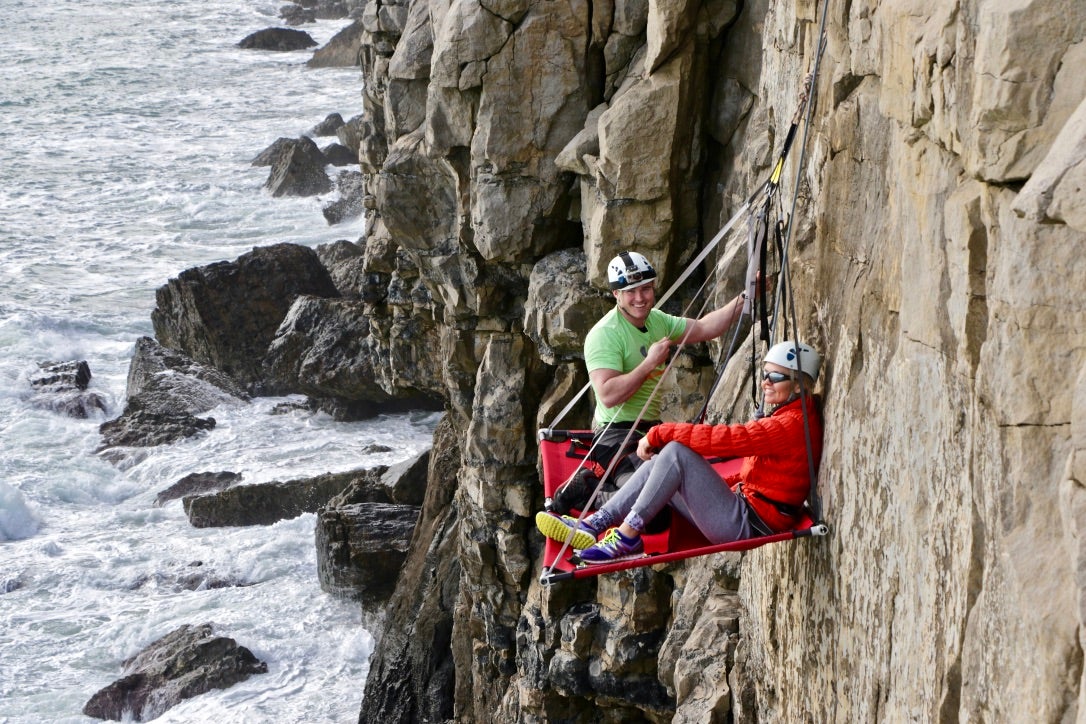 With that thought, we left our bed and clambered back over the cliff edge, where I had to resist the urge to get down on my hands and knees and kiss the ground like shipwrecked sailors do in films.

It was pretty terrifying to watch Eddy fold down the portaledge into a small rucksack; I still can’t believe that the only thing between us and the yawning abyss was essentially an army cot and a bit of string. But while solid ground felt unusually brilliant, I also felt a real pride in having faced up to vertigo – and relief that I didn’t have to attempt to pee over the edge.

Eddy Young at Young’s Adventure Solutions (07977 193004; youngsadventuresolutions.co.uk) offers overnight cliff camping trips on the Dorset coast from £250 per person, and three-hour lunch or sunset cliff camping experiences from £120 per person, including food and equipment.

The eight best Formula One destinations

Isle of Wight: Why walking the island is the perfect way to explore countryside & history