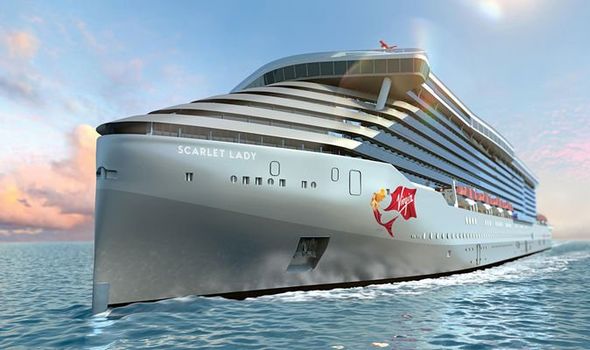 About 140ft below is a dry dock and a vast building site. Branson’s in-house video crew film him as he speeds past a giant red funnel splashed with the unmistakable Virgin logo.

He comes to a standstill, puffing excitedly: “This is going to be the most incredible jogging track in the world. Imagine being up here with the Caribbean all around you. Now that’s the way to recover from a hard night partying.”

We’re on The Runway, which floats like a halo around Deck 17 of the £600million cruise liner Scarlet Lady, the first Virgin Voyages ship from a venture that Branson hopes will shake up the staid world of cruising.

Her inaugural sailing on April 1 from Miami will launch a venture that has been 40 years in the dreaming. She recently arrived in Marseille from Italy where she was built after seven years of design and planning. Having successfully completed sea trials, she is now in dock for final fittings. Branson has jetted in from Australia to see her accompanied by his wife, Joan, and their ­children, Holly, 38, and Sam, 34. I am the first journalist to see her and the only one invited aboard to take the tour.

Shortly after his aerial jog, Branson and I settle down on plastic chairs to talk in a makeshift workers’ cafe that one day soon will be Razzle Dazzle, one of the 20 themed restaurants on board.

Today, it’s like everywhere else – a half-finished shell in organised dismemberment. Cables and fittings hang from the ceilings, walls and floors, as builders zig-zag around ­banging, welding and drilling. There are close to 1,000 of them working around the clock.

Just as I turn on my tape recorder, someone somewhere decides to test the Tannoy system with Andrea Bocelli’s Time to Say Goodbye at full volume. 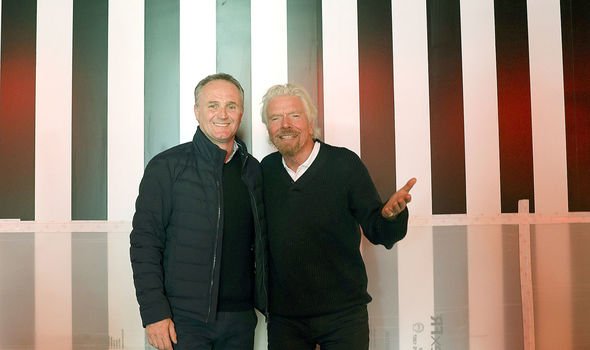 Laughing at the craziness of it, Branson helpfully leans into my dictaphone. So, how does it feel to actually see the ship?

“Life has been pretty incredible to me, to say the least, but today is one of those pinch yourself moments,” he says.

“I have wanted to launch a cruise line since my 20s, but I was always too busy. I have seen this ship come together since it was an idea on a piece of paper, but I never thought it would be this good. Every single bit of detail is going to be knockout.”

Scarlet Lady has been designed by what Branson calls the “creative collective” of architects deliberately hired because they had NO background in cruise ships.

The look will be more that of a fashionable boutique hotel, with a sense of Virgin flamboyance and cool, than the rather dated formalities of many traditional cruise ­liners. For starters, not many cruise ships have a tattoo parlour, a cook-your-own Korean BBQ eatery, or a vinyl record shop.

It has taken a staggering amount of money to make Virgin Voyages happen. Even by Branson’s swashbuckling standards of airlines, trains and spaceships, this is big. He is sinking an eye-watering £2billion into it – all raised through private equity investors. 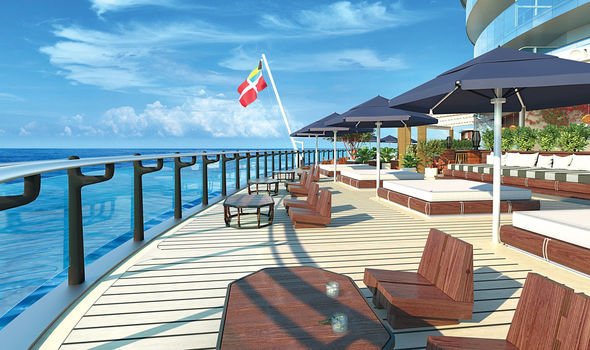 The second ship – Valiant Lady –will begin cruising around the Med from Barcelona in 2021. A third will follow soon after and one day Branson hopes there will be 10 or more “Ladies” sashaying around the seas of the world. But how can he make sailing en masse different? Branson picks up the story. “I have never wanted to go on a cruise, so when I started this, I got the team to really look at why I felt like that. I knew it had to be more than just about going from port to port with a bit of free food thrown in,” he says. “We got a big piece of blank paper and wrote down all the things we hate about cruising and I challenged everyone to make it different. We want people to be surprised throughout the journey and for it to be a ­voyage of discovery.

“We have run six or seven nightclubs over the years – like The Roof Gardens and Heaven – so we know how to entertain people and they seem to like the way we do things.

“Our ships have been designed like one of the best big private yachts imaginable with all the toys, but it’s going to be full of people having a lot of fun, rather than one person rattling around it.

“The idea is that everywhere you go there is something unique – and everyone is going to be treated like rock stars.” 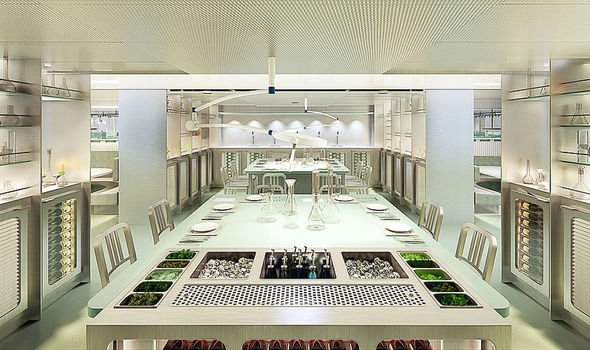 We are joined by Tom McAlpin, Voyages’ CEO and the man guiding this building site into Branson’s vision. A stocky and affable American, McAlpin is a cruising veteran who launched, then ran, Disney’s line for 15 years.

“These ships are like mini cities,” he says. “You have to think of everything, from the power supply, to food and drink and waste, to the entertainment. And you have to tie it altogether into the romance of sailing. It’s great fun – but not easy.”

Branson chips in: “It feels as though we have needed the ­experience of running all the other businesses over the years to help bring this one together.”

Scarlet Lady is a mid-sized ship and will have 1,150 crew looking after 2,770 passengers, who will be known as “sailors”. Cruise itineraries and lengths of stay will ­initially vary between Florida, Mexico, Cuba and various Caribbean outposts.

Cruises will cost from about £765 per sailor for five nights, unless you stay in one of the RockStar Suites, which can go up to £22,000 for the exclusive Massive Suite on the top deck. Central to making Virgin Voyages different is that it is for adults only, so you have to be over 18.

“We’re creating an adult experience, which can be much more sophisticated and elevated. It allows people to kick back away from the kids,” says Branson. 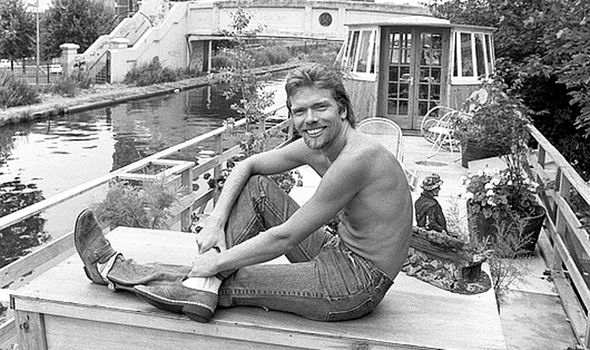 Gone also is that age-old signature statement of cruising gluttony – the buffet. Instead, Voyages ships will have “food halls” and a mix of different restaurants that only serve food to order to cut back on waste.

The tradition of tipping the crew at the end of a cruise is also out. Instead, Branson has geared staff wages to be above the industry average to negate the need for a top-up from passengers. “We want a happy crew and for our sailors not to have the pressure of having to work out what to tip to leave at the end of the holiday,” he says.

At the forefront of the plan is sustainability. Lady Scarlet has a fuel-efficient hull, and all cabins are fitted with sensors to automatically turn down lighting and air con when they are unoccupied.

Single-use plastic is banned from the ship, a ban that also extends into the supply chain. Sailors will even be supplied with “reef-friendly” sunscreen that is devoid of chemicals that leak into the water system and, ultimately, destroy sea life. Weighing anchor on the long-awaited Voyages ­venture looks like being a stand-out moment in what is already shaping up to be a big year for Branson. 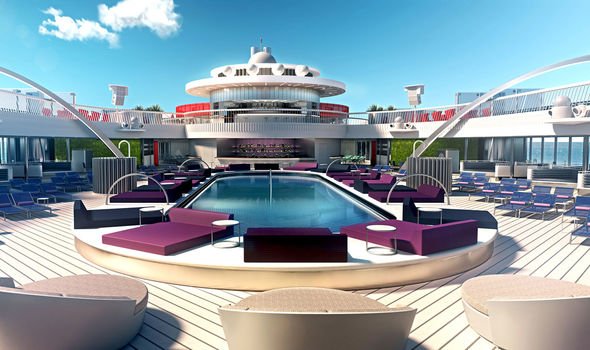 His Virgin empire celebrates its golden anniversary and he will turn 70 in July. I wonder how he feels about hitting that age landmark.

“I’m actually really excited. I have always viewed age as just a number and would never let it stop me from taking on a challenge.

“And I am probably fitter now than I have been for decades. For the past few years I have built health and fitness – whether it’s tennis or kite surfing – into my schedule as if it were as important as any piece of business.”

Branson is suddenly jolted by the memory that his entrepreneurial dreams all began on a ­modest house boat in Little Venice with a mail order record business.

“It’s nice to think the empire started on a boat and here we are at this wonderful place. It’s an interesting juxtaposition, just bigger.”

By anyone’s standards, it has been a remarkable voyage from that barge in a canal to this enormous ship. And, judging by the way Branson skipped along that running track earlier, there are a few more interesting laps in this bearded old sea dog yet.

Norwegian Cruise Line Will Give Away Cruises During the Super Bowl

Hurtigruten to Launch Electric Catamaran in 2020