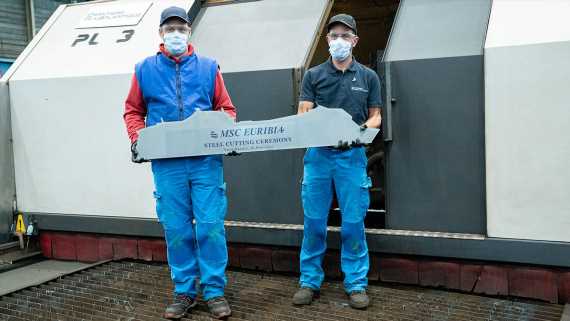 MSC Cruises cut the steel on Monday for its 22nd ship, to be named the MSC Euribia. The ship is scheduled to enter service in June 2023.

The ship will be named for Eurybia, the Greek goddess who had mastery of the seas.

The vessel, which MSC said is its most environmentally advanced ship to date, will be built at the Chantiers de l’Atlantique shipyard in St. Nazaire, France.

It will be MSC’s second ship to run on liquefied natural gas (LNG) and will be equipped with solutions to minimize its environmental impact, the line said. They include an underwater radiated noise management system and hull and engine room designs that minimize acoustic sound impact, reducing the potential effect on marine life in the surrounding waters.

The Euribia is the second ship MSC has named in its early stages in less than a week. On June 24, the line said it would name its second Seaside EVO-class ship the MSC Seascape when it debuts in November 2022. MSC said the ship would feature the RoboCoaster, but it has yet to reveal details.