What’s it like on the new world’s largest cruise ship, Symphony of the Seas? Our latest Cruise Ship Tour, in the carousel on this page, offers a deck-by-deck look at the giant Royal Caribbean vessel, which will be christened Thursday in Miami.

Scheduled to begin week-long Caribbean trips out of the city on Saturday, Symphony will dwarf most of the ships based at PortMiami, Miami’s giant cruise hub. Measuring 228,081 gross tons, it’s more than twice the size of such Miami-based vessels as Norwegian Sky and Carnival Victory. Soaring 18 decks high and nearly 1,200 feet long, it can hold up to 6,680 passengers.

Still, Symphony’s size and passenger capacity is just the beginning of the story on the ship. As can be seen in the tour, the vessel resembles the biggest of the big mega-resorts on land with an dazzling array of attractions including a record-breaking thrill slide that plunges nearly 100 feet, three main pool areas, a water slide complex, an adults-only solarium, an ice skating rink, two rock climbing walls, a basketball court and a mall-like indoor promenade with shops, bars and eateries. 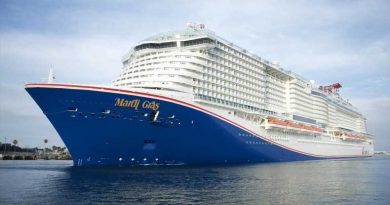