Home » Cruises » These Cruise Companies Are Operating Now in Europe

While the majority of major ocean-going cruise ships are sitting idle, several smaller, niche operators have resumed sailings, although in a limited way.

Among the companies operating in Europe are SeaDream Yacht Club, Hurtigruten, Katarina Line and A-ROSA. They all say they have instituted strict health and sanitation protocols that follow government regulations and guidelines to help stop the spread of COVID-19.

In the U.S., the Centers for Disease Control and Prevention issued a no-sail order that could expire July 24; however, ocean-going cruise lines voluntarily suspended voyages until Sept. 15, 2020. American Cruise Lines, which operates small ships that aren’t included in the no-sail order, hopes to relaunch cruising on July 12 in the Mississippi River.

SeaDream Yacht Club now is operating voyages in Norway with guests from Iceland, Norway, Sweden, Finland, Denmark and the Faroe Islands, per the Norwegian government’s recommendations.

On July 15, Norway will open to travelers from the European Economic Area and the Schengen area, provided their countries meet certain criteria.

The European Union plans to reopen its borders, but it appears likely that it will continue to bar U.S. travelers because the country has not controlled the COVID-19 pandemic. The final list of approved countries is expected this week.

“At SeaDream, we are proud to be the first luxury line to be sailing again,” the company said in a marketing email. “We have worked hard during the pause in operations to make the SeaDream experience even better. The crew took the pause in operations as an opportunity to hone their skills, rejuvenate the yachts, and completed WHO’s official COVID-19 course for hygiene procedures and infection management. It’s been so exciting to see these efforts resulting in a successful first voyage in Norway.”

The company is operating its twin 116-passenger SeaDream I and II yachts in Norway.

Hurtigruten also is operating four ships in Norway. The first voyage was with the 540-bed MS Finnmarken from Bergen on June 16. MS Richard With, MS Trollfjord, and MS Midnatsol, are also sailing their original routes between Bergen and Kirkenes. The cruises are marketed primarily to Norwegians. 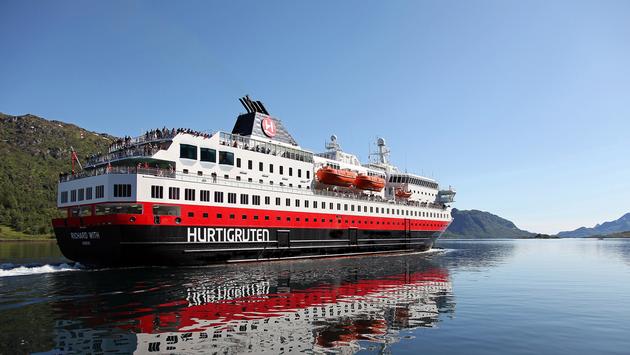 The Hurtigruten ships are operating at 50 percent capacity for now. Wearing a face mask onboard is optional, and guests are asked to stay at least one meter (about three feet) away from each other. Guests must fill out a health form and will get their temperature taken with a contactless fever scan before boarding.

Katarina Line protocols include the frequent disinfectant of public surfaces, availability of hand sanitizers, regulating the number of guests in public areas such as sundecks, hot tubs and dining tables, and observing social distancing policies during land tours.

“Small-ship cruising is among the safest way to enjoy an unforgettable vacation experience in Croatia,” said Daniel Hauptfeld, marketing director for Katarina Line. “Our vessels hold a maximum of just 36 guests, so they are perfect for small groups, families and friends to travel from one island to another, swimming in secluded beaches that are approachable only by boat – all without the crowds of larger vessels.”

Among its most popular itineraries is the seven-day “Adriatic Explorer,” which sails between the resort town of Opatija in the northernmost coast of Croatia and Dubrovnik, on the country’s southern tip. Its “Northern Gems” cruises feature seven-day roundtrips from Split, Croatia’s second-largest city.

A-ROSA, a German river cruise operator, now is operating river cruises on the Douro in Portugal, Danube and Rhine in Germany, and expects to resume cruises on the Seine in France July 11. For the time being, traveling with A-ROSA is only possible for guests from the EU and the Schengen area comprised of 26 European nations.

Guest capacity was reduced for the initial departures and seating was arranged to allow for social distancing. Crew members and guests are required to wear a facemask, except when dining or in the open-air areas.

AQSC Announces Up to $5,800 in Savings for Wave Season