Tucked in the dark brown benches of the Ghriba Synagogue, people sip honey pepper Nemiroff vodka and Jim Beam whisky, and nosh on nuts and dried fruit. Before long, the synagogue starts to smell like the aftermath of a lively party: all booze and sweat. A live band plays rousing Arabic music, sung with enthusiasm by a Jewish man in a yarmulke.

With Israel recently moving to withdraw Arabic as an official language, it’s affirming and a bit surreal to see Jews – many of whom are Israeli – singing and celebrating in this ancient language.

Tunisia’s southern island of Djerba is known for drawing tourists to its whitewashed buildings, sandy beaches rimmed with turquoise water, and colourful souks. But it’s also notable as a bastion of coexistence. The small island is the home of the last Tunisian Jews, with one of the largest and most vibrant Jewish populations in the Arab world – and the oldest synagogue in Africa.

Every spring, international pilgrims descend on the island to celebrate the Jewish holiday of Lag Ba’omer and reaffirm the island’s special commitment to harmonious living.

The main town of Houmt Souk has the colours and contours of a Greek island village, but everything is covered with a thin film of dust, lending a shabby vibe to the place. Women wrap themselves in scarves to block out the hot wind and sun, while men ride by on bikes, baskets bursting with baguettes. Blue doors and balconies are entangled with bougainvillea blossoms. 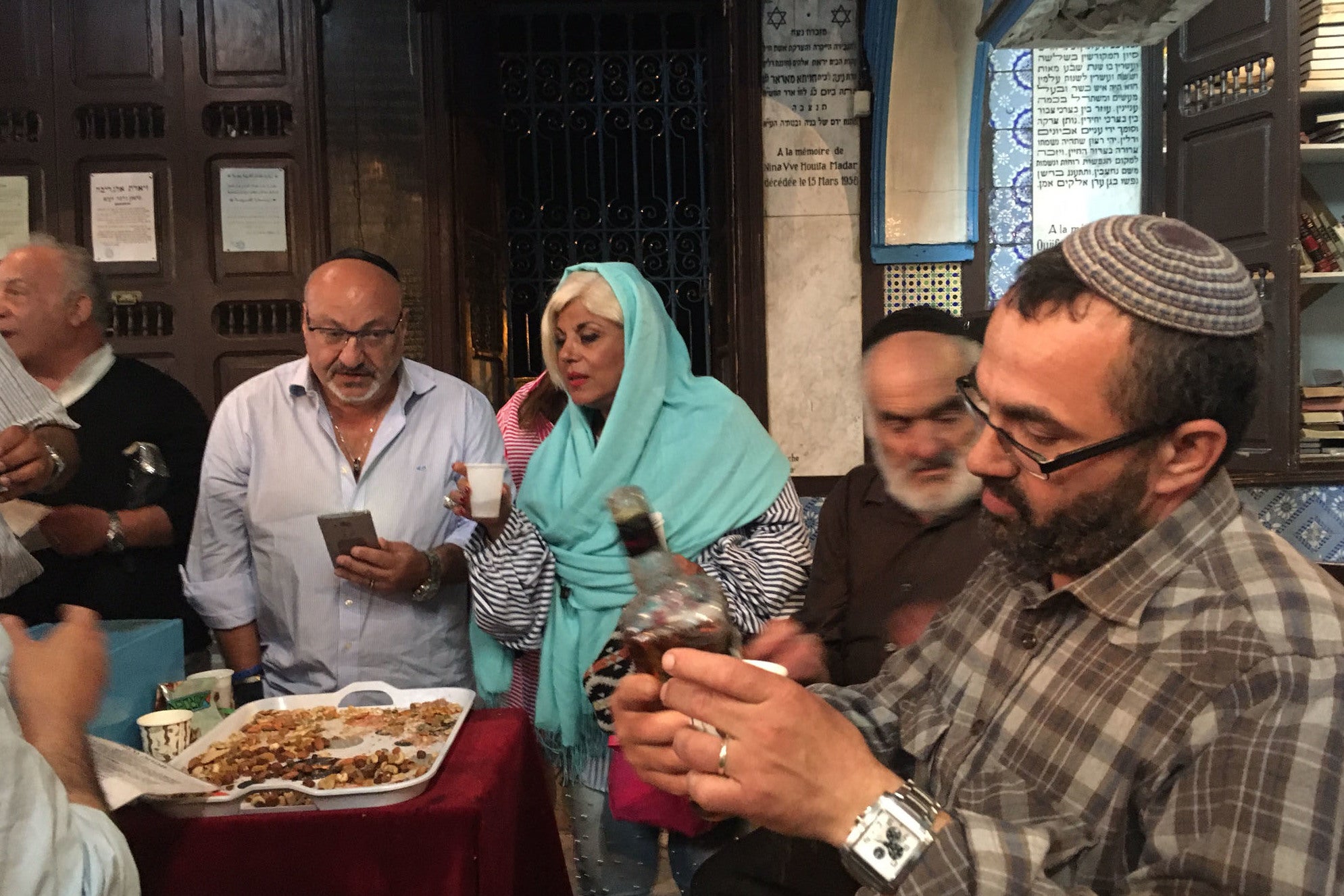 Mat weaver Mohamed Khacha’s unassuming workshop is tucked away in Houmt Souk, on the second floor of a shaded courtyard. Mohamed, a Muslim, has been making mats for the Ghriba Synagogue for nearly 50 years.

His work is methodical and traditional: braiding and weaving palm fronds into traditional prayer mats that are used by both the Jews and Muslims of Djerba. Mohamed and his daughter Amal are emphatic about the significance of coexistence on the island.

“The most important thing for us is to show that in Djerba, in Tunis, in Tunisia, in the whole world, Muslims and Jews can live together,” Amal says.

The Jewish population is centred on two enclaves on the inland section of the island: Hara Kebira and Hara Sghira, in the town of Erriadh. Gritty streets are home to vibrant street art, with the remains of 2014’s international Djerbahood art project still visible throughout Erriadh’s alleys and walls.

More hidden are the many small synagogues tucked away in its curving streets, a quiet reminder of the island’s Jewish heritage. Ghriba Synagogue, however, is emphatically the opposite, unhidden and splendid. 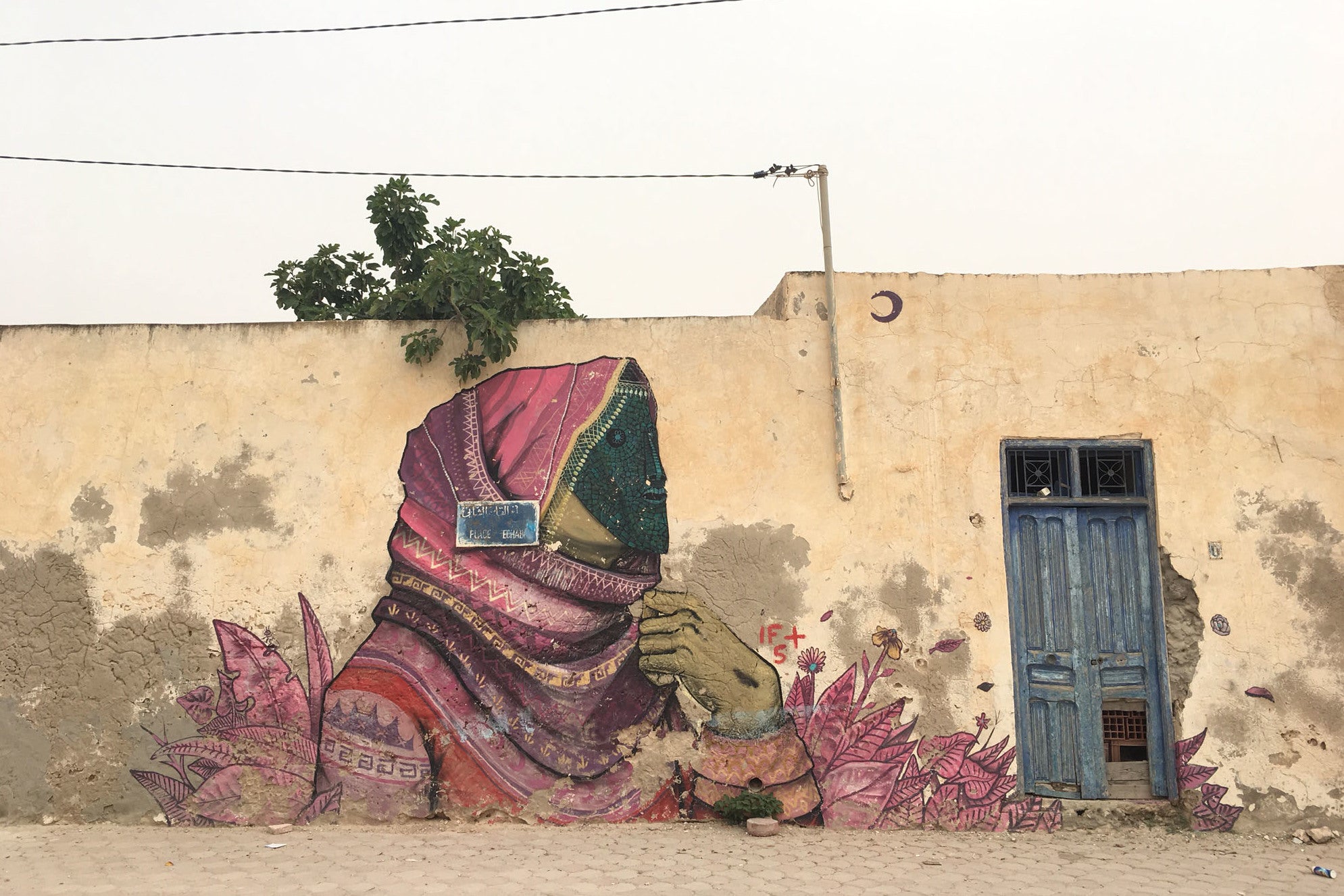 Founded in 586 BC, contemporaneous with the destruction of the first temple in Jerusalem, the synagogue speaks to the 2000-year history of Jews in Tunisia. The Jewish population of the island – and of Tunisia as a whole – has diminished significantly in the last 70 years, with many leaving for France and Israel.

Despite terror attacks in mainland Tunisia in 2015, and the Israeli government’s warnings to its citizens to stay away, the Ghriba pilgrimage remains an opportunity for Tunisian Jews to reconnect with their homeland. Perhaps that’s why the annual event quickly starts to feel like a giant family reunion.

The courtyard in the Ghriba Synagogue complex is gleaming white with bright blue trim; long strands of red Tunisian flags criss-cross the open roof. The low buzzing of bustling activity inside begins early on the first day of the pilgrimage.

The synagogue itself quickly fills up with people in various interpretations of modesty – there are bare legs, off-the-shoulder tops and colourful head scarves.

Some of the more religious Djerban Jewish women wear jaunty hats decorated with flowers and rhinestones that would suit a 1920s flapper. It’s required for these women to cover their hair after they are married, but as one pilgrim put it: “We want to be beautiful!”

The soft murmur of French, Arabic, and Hebrew fills the smaller chamber of the synagogue as women write messages on hard-boiled eggs: wishes for marriages, children and luck. Women tuck the eggs and their messages in a candle-lit crawlspace in the heart of the synagogue.

Under blue tiled arches, people say prayers and light thick white candles in long metal rows, while a visiting pilgrim leads a performance of traditional songs with the mingling crowd. 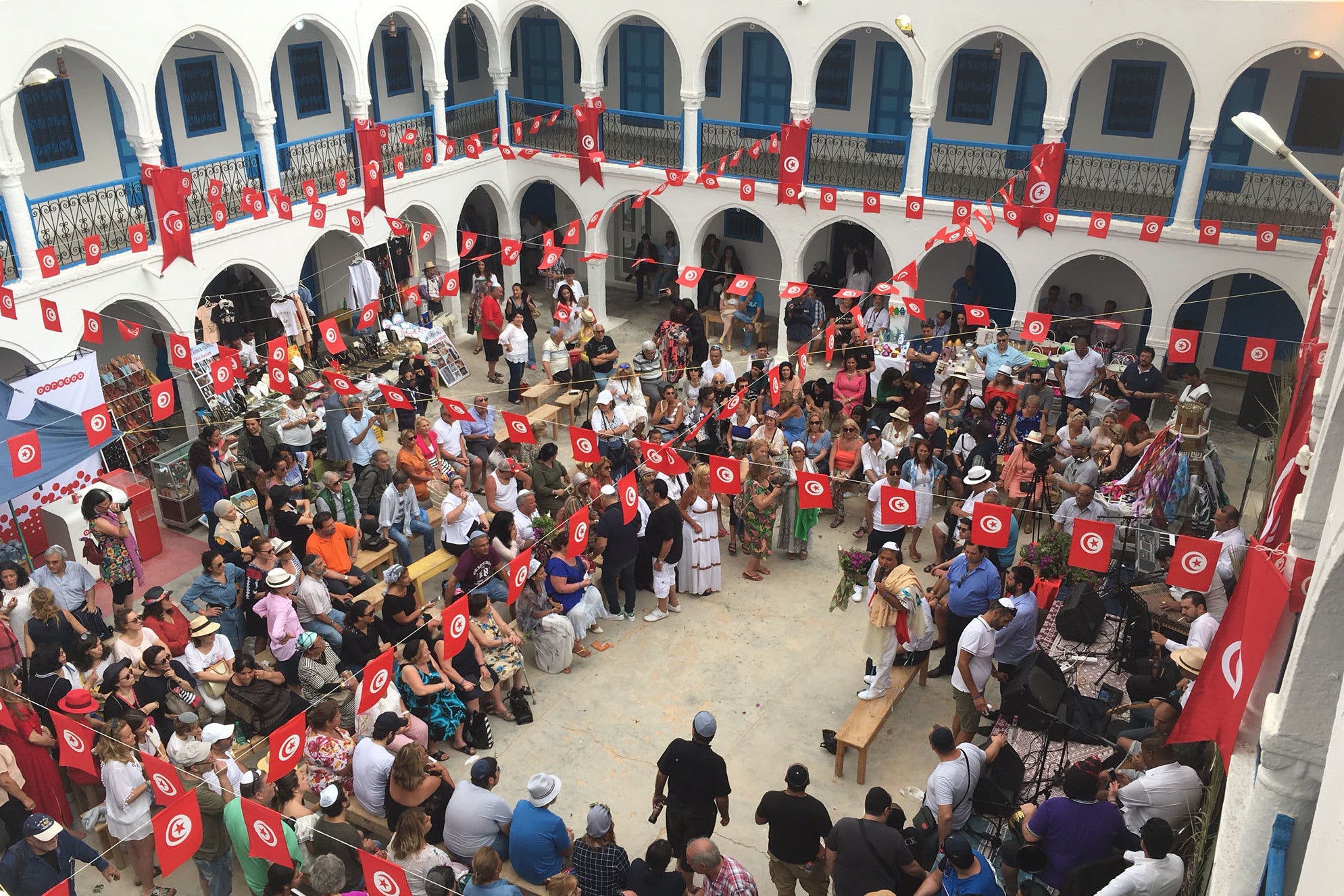 Not only Jews attend the festival. There are Muslims too, sometimes noticeable by the way they tie their headscarves, sometimes blending in with the other revellers. Locals and visitors from other parts of the country partake in the festivities and rituals, lighting candles and singing along.

Everyone is welcomed; the refrain that’s constantly heard among the non-Jewish visitors is that they are all Tunisian, and everyone can enjoy the pilgrimage.

Out back and away from the noise of the band, men grill chicken and beef on wooden spits, and people sit together drinking beer. As the day draws to a close and Shabbat, the holy day of rest, draws near, the smell of fresh rain and the sound of security helicopters circling overhead accompany drumbeats as the pilgrims join a procession out of Ghriba Synagogue.

The call to prayer from the mosque next door mingles with the singing of the Jewish pilgrims, another reminder that on this island, the cultures are constantly layering. 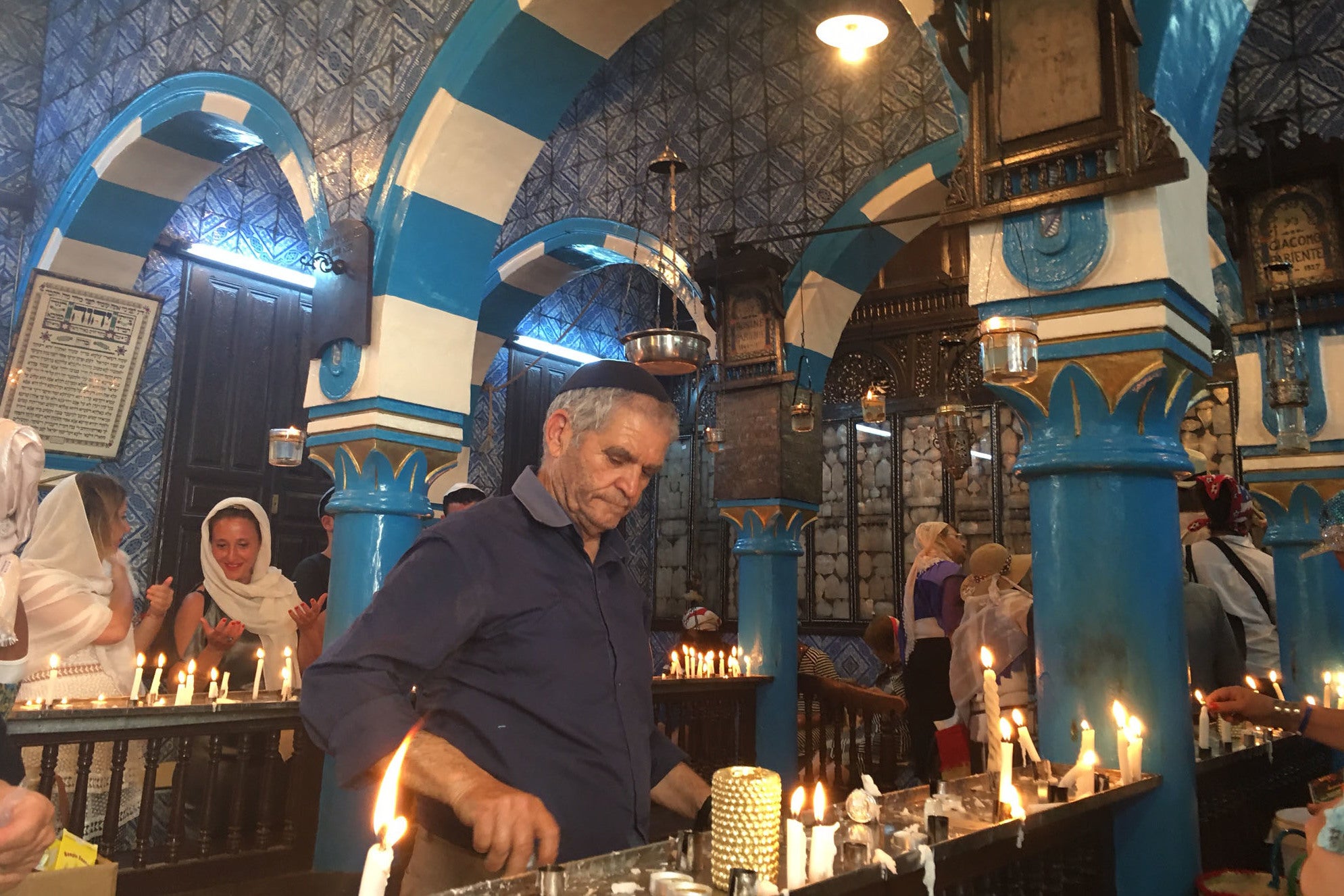 After Shabbat finishes on Saturday night, people return to Ghriba to light candles and chant prayers, to take selfies and chat: to celebrate the synagogue and the fact of their togetherness. While many of the tourists depart for a dinner party at the island’s one casino, the locals stay behind for one of the Lag B’Omer holiday’s main rituals: the first haircut of a three-year-old boy.

People eat merguez sausages on sticks and make boozy toasts. Woman sit on one end of the long picnic tables and men on the other, but the groups mingle and children run back and forth. This religious ritual resembles a big family barbecue.

The boy whose curls will be cut basks in the attention, not suspecting that soon he’s going to be the true star of the show. His haircut is accompanied by cheers and singing, as rabbis and family members each take a snip.

By the last day of the festival, the pilgrimage completely takes on a block party vibe as everyone starts to recognise each other. Inside the synagogue, two Tunisian Muslim girls in headscarves write wishes in Arabic on their hard boiled eggs. It’s not their tradition, but it doesn’t matter.

In Djerba, everyone’s eggs sit side by side in the heart of synagogue. As Amal in Houmt Souk put it: “The most important thing for us is to be human.” 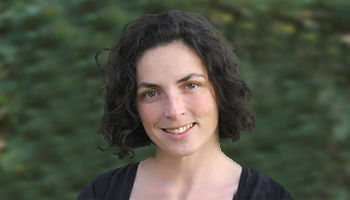 Getting serious about sustainability: Travel Weekly