“I just need a minute to breathe,” I said, as – for what seemed like the millionth time – I sat on a rock and inhaled deeply, wishing for more oxygen in the air. Behind me, I could make out the faint sound of someone being sick. This was nothing like my training.

I’d signed up to climb Kilimanjaro a few months before the November departure, leaving me plenty of time to shape up. I went to exercise classes and training sessions almost every weekday, while weekends became all about walking – in the Lakes, the Brecon Beacons and the Home Counties. When the time came, I felt ready.

The night before the climb was spent in the northern Tanzanian town of Marangu, at a hotel that didn’t seem to have changed much in 30 years – not the staff, the décor or the sheets. Here I met the rest of the group – five other 20- and 30-somethings – and our Intrepid Travel guide, Mathew, for a briefing before an early night.

The next morning the hotel was bustling. Around 20 porters had arrived, ready to lug our tents, food and kit bags — as well as their own stuff — while all we would have to carry were our day packs. Over the course of the week I lost count of the number of times we were overtaken by these superheroes, who’d run past with up to 15kg on their heads while we pushed on at the speed of pensioners. 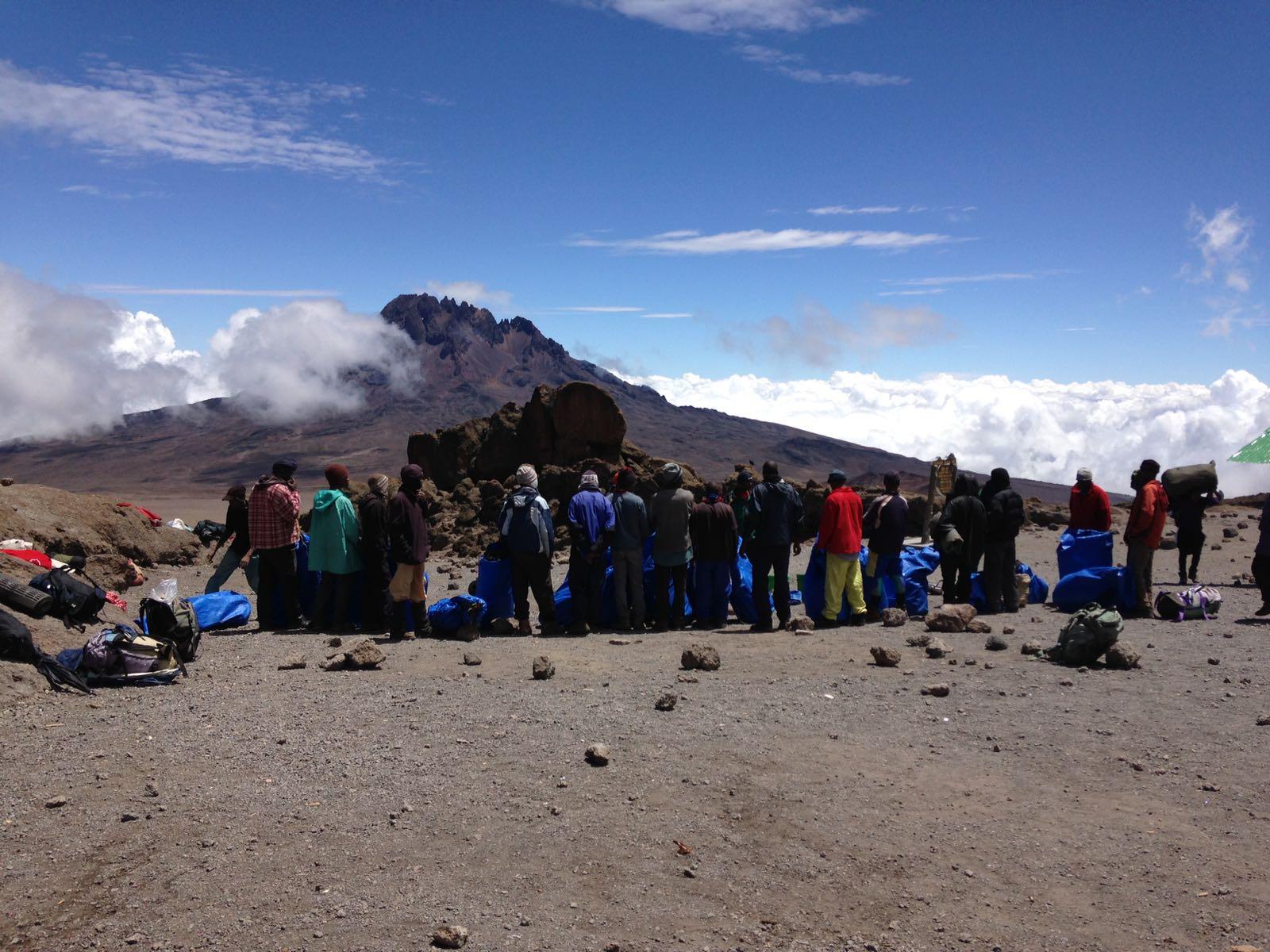 We were following the Rongai route, which starts on the mountain’s north side, a couple of hours’ drive from Marangu, so by the time we got to the gate we were raring to go. But, as Mathew had told us the night before, we had to take it “pole pole” (slowly, slowly) if we wanted to acclimatise. “Never overtake the guide in front,” we were warned.

November is the beginning of rainy season so we set off in a downpour, waterproofed up to the eyeballs. Tiny children came running up as we passed farming villages on the way to the forest; I’d been expecting a lush jungle with monkeys swinging from the trees but that’s on the other side of the mountain — as I found out on the way down. This, by contrast, didn’t feel entirely dissimilar to, say, Surrey, except for the ringtone-like bird calls and the occasional bush pig print.

We continued, pole pole, up the gentle incline, before emerging on to the moorland – the third of Kili’s five distinct zones (farmland and forest being the first two). The rocky path led us through tall grasses and across streams lined with giant groundsels – an eccentric pineapple-triffid hybid of a plant, found only on the mountains of East Africa. 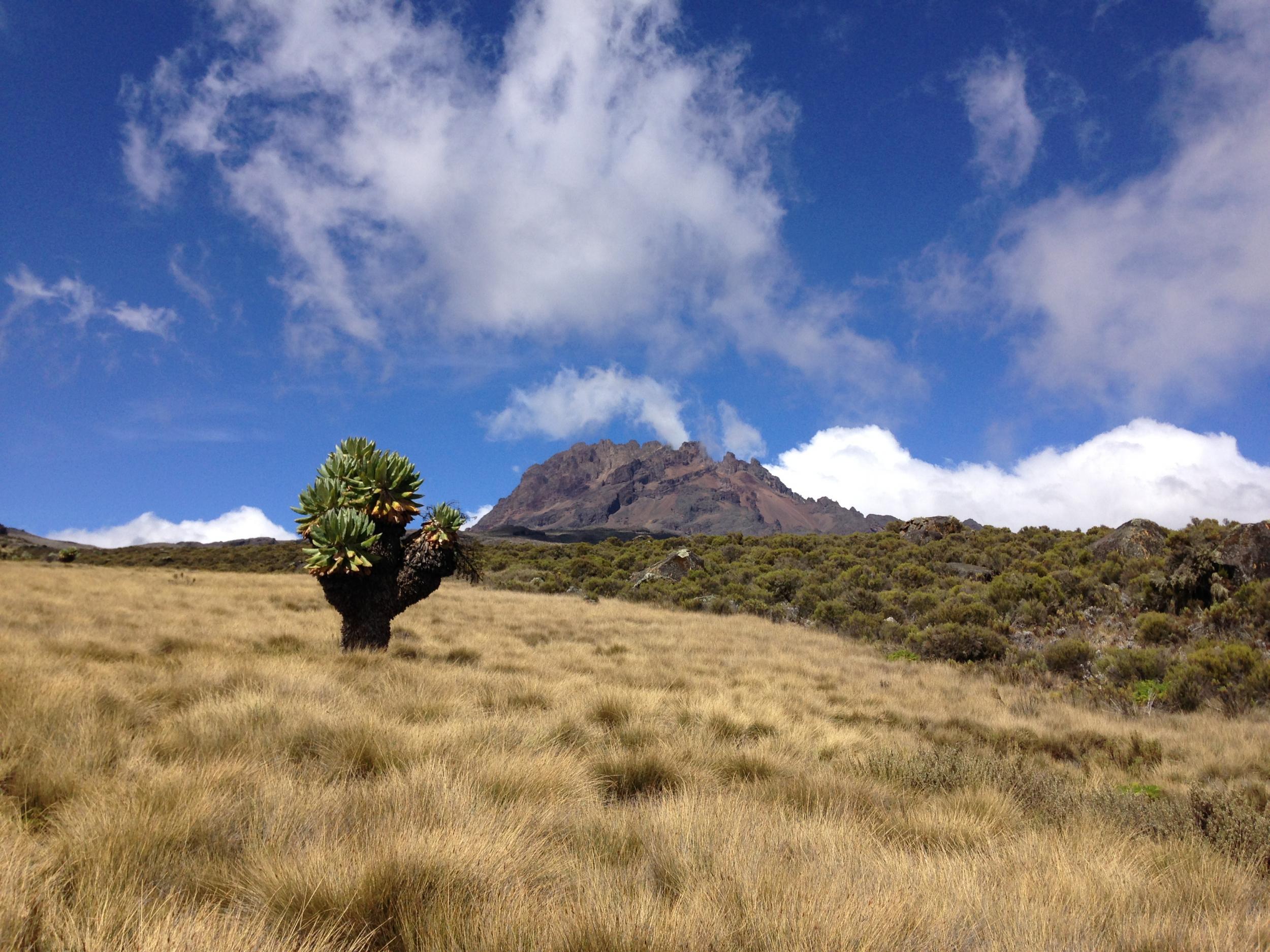 By the time we reached Simba Camp the porters had already set everything up. And we had company; a couple of white-necked ravens the size of small cats. They – though we couldn’t be sure it was that exact pair – would keep us company throughout the week, popping up whenever we took a break.

For the next few days we fell into a comfortable routine. Our three guides, Mathew, Sam and Faraja, would lead us for a few hours of steady walking punctuated by a packed lunch. On arrival at camp there would be popcorn and hot drinks, card games, a short acclimatisation walk, more card games, dinner and early bed. 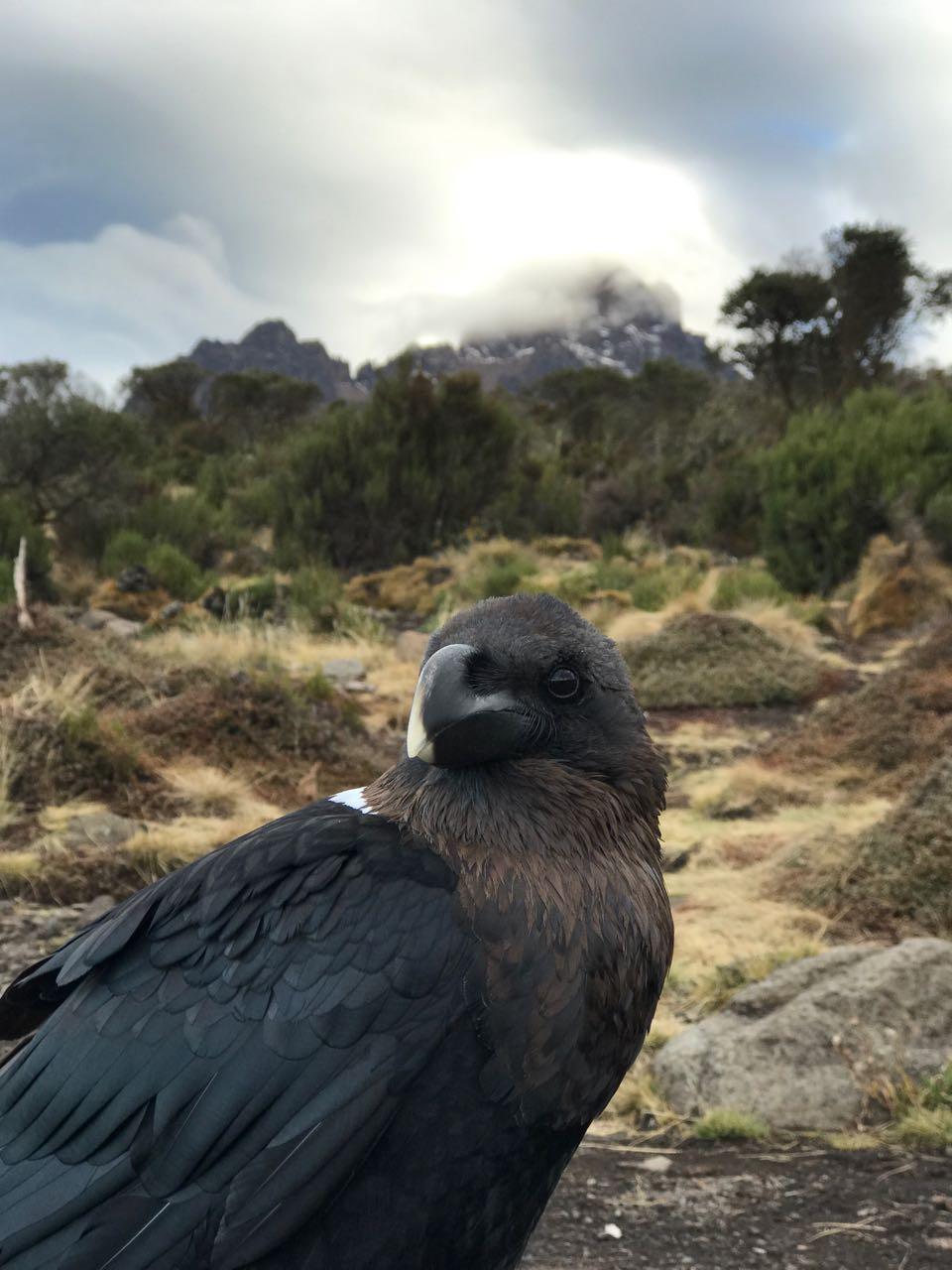 Along the way, we passed caves and the remains of a light aircraft that crashed in 2008 (caused by poor visibility, apparently), and learned that distances on Kili can be deceptive – something that looks about half an hour’s walk away can in fact more like two hours, and the ridge you thought you were aiming for can often turn out just to be just a blip on the ridge behind it.

Mathew had taught us the words to a Swahili song, and whenever there was a lull in conversation, someone would burst out with “Jambo, jambo bwana…” But as we crossed the alpine desert (Kili’s fourth zone) we fell silent, the swishing sound of feet on sand becoming almost hypnotic. So much so that one of our group fell asleep while walking.

One night we camped at Mawenzi Tarn, the mountain’s only permanent lake. It sits in the shadow of jagged Mawenzi peak which, though not as high as the summit at Uhuru (the fifth zone), can only be undertaken by experienced climbers with serious kit and specialist guides. 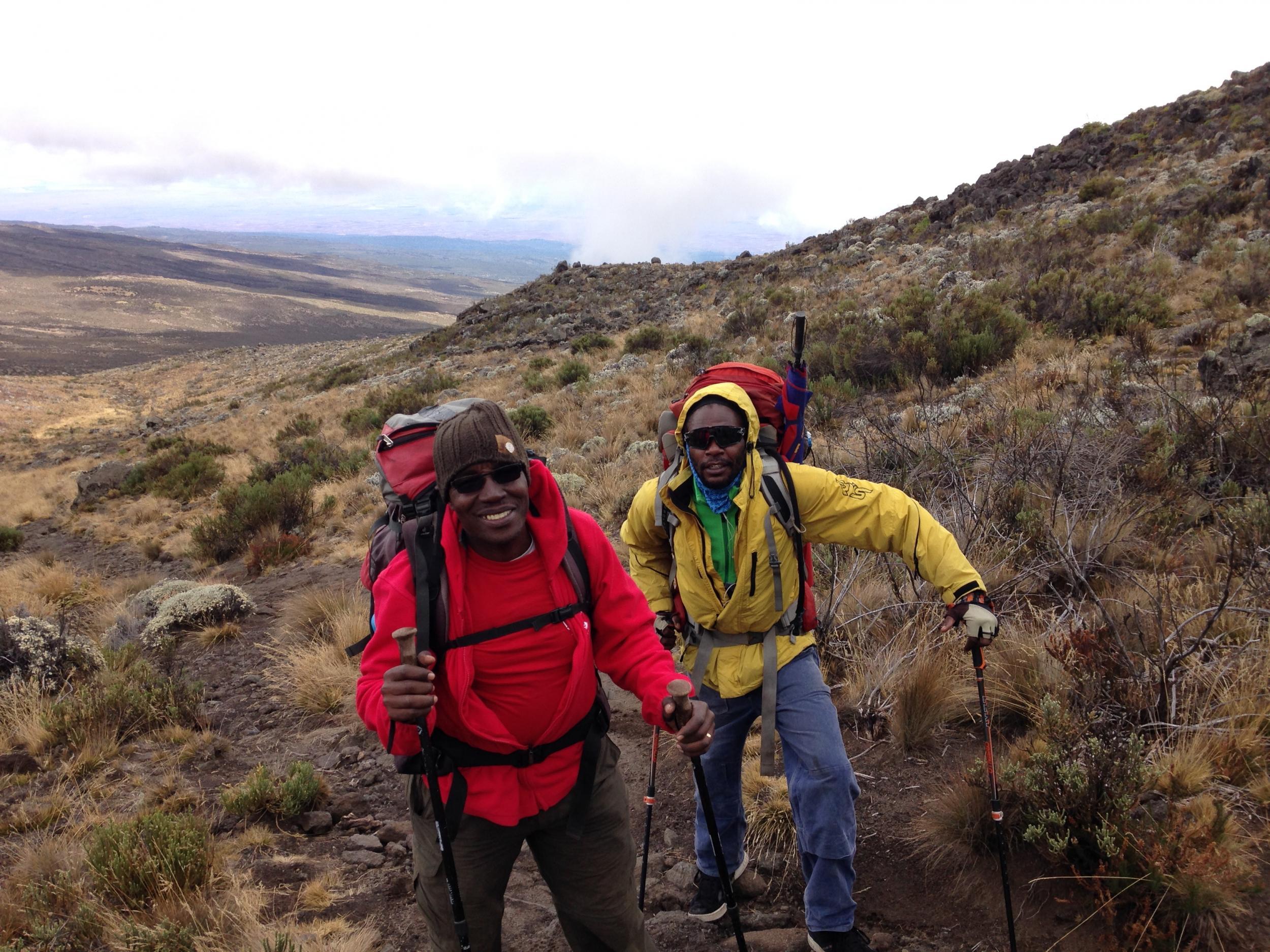 After four days, we reached Kibo Camp, the closest campsite to the summit at Uhuru, where we went to bed at 7pm in preparation for setting off at midnight. Naturally, no one really slept, and in a dreamlike state I pulled on almost every layer I had, poured warm water into my hydration bladder in the hope that it wouldn’t freeze (it did) and sat down for a pep talk.

Each of the guides had his own words of wisdom. “The harder the battle, the sweeter the victory,” said Faraja. “Don’t think about what’s happening at home, just think about the mountain,” said Mathew. Sam, who’s summited hundreds of times and – reassuringly – once got an 86-year-old up to Uhuru, told us: “We are good motivators but you have to motivate yourselves.”

And so we set off in the dark, head torches on, zig-zagging up the frosty slope. We went pole pole, stopping increasingly often to warm our frozen fingers, catch our breath, drink the last drops of unfrozen water, or — in some cases — vomit. Faraja, meanwhile, was running up and down alongside us, doing press-ups and singing in an attempt to keep our spirits up. Just looking at him made me tired. 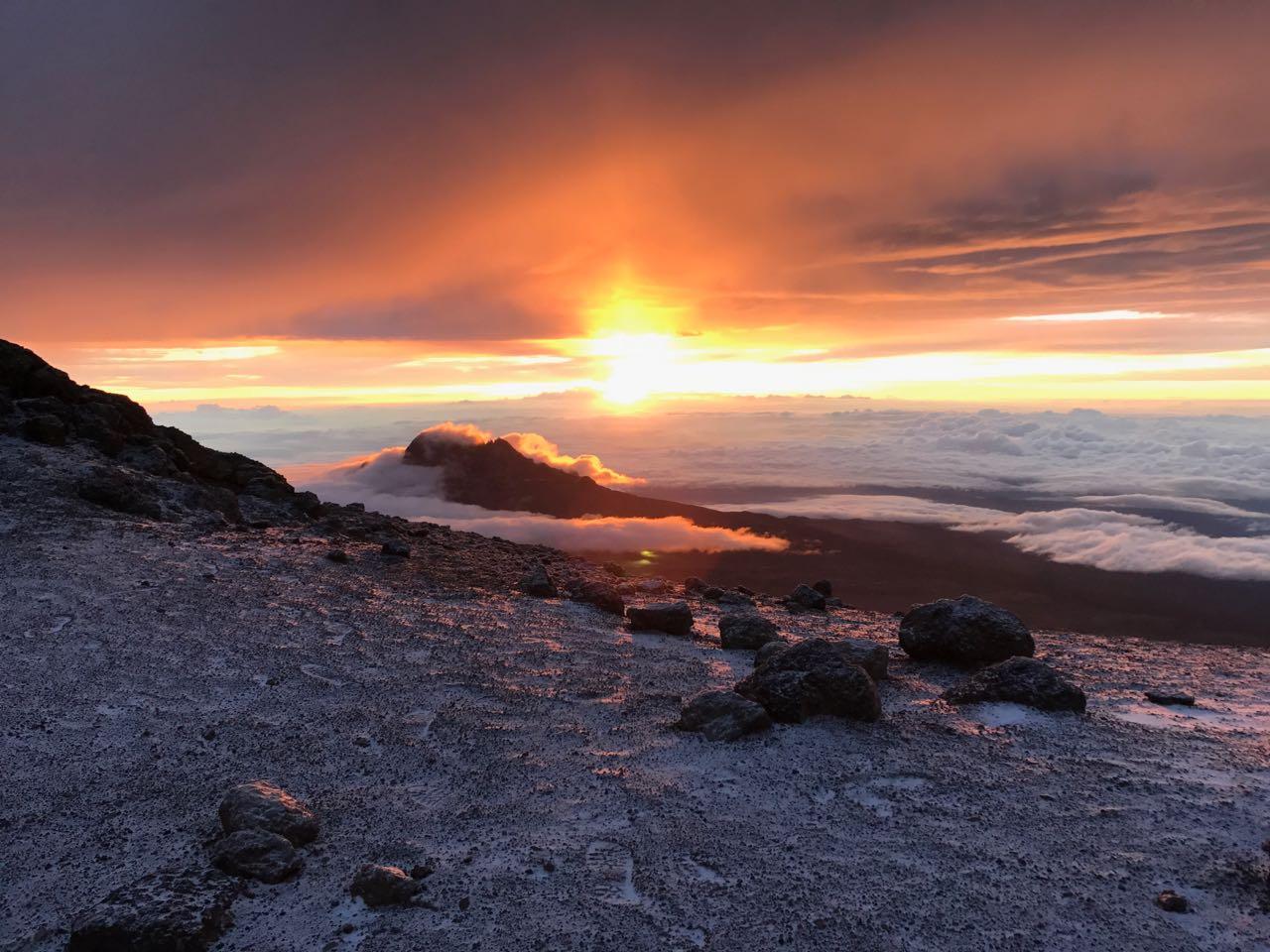 I can’t say exactly how long it took to reach Gilman’s Point, at 5,680m, but the sun was starting to wake up, even if some of us were doing the opposite. Yet we still had to make our way along the rim of the volcanic crater to get to Uhuru. Vast, cubist glaciers loomed alongside, and the spectacular ice fields stretched out to touch the cloud beyond.

Finally, the summit hove into view. As we approached the ramshackle sign informing us that we were at 5,895m, Africa’s highest point, the six of us burst into tears — a mix of excitement, exhaustion and relief that we’d made it after seven hours. Group hugs and so many photos ensued, and before we knew it the guides were ushering us away. It was time to come down. 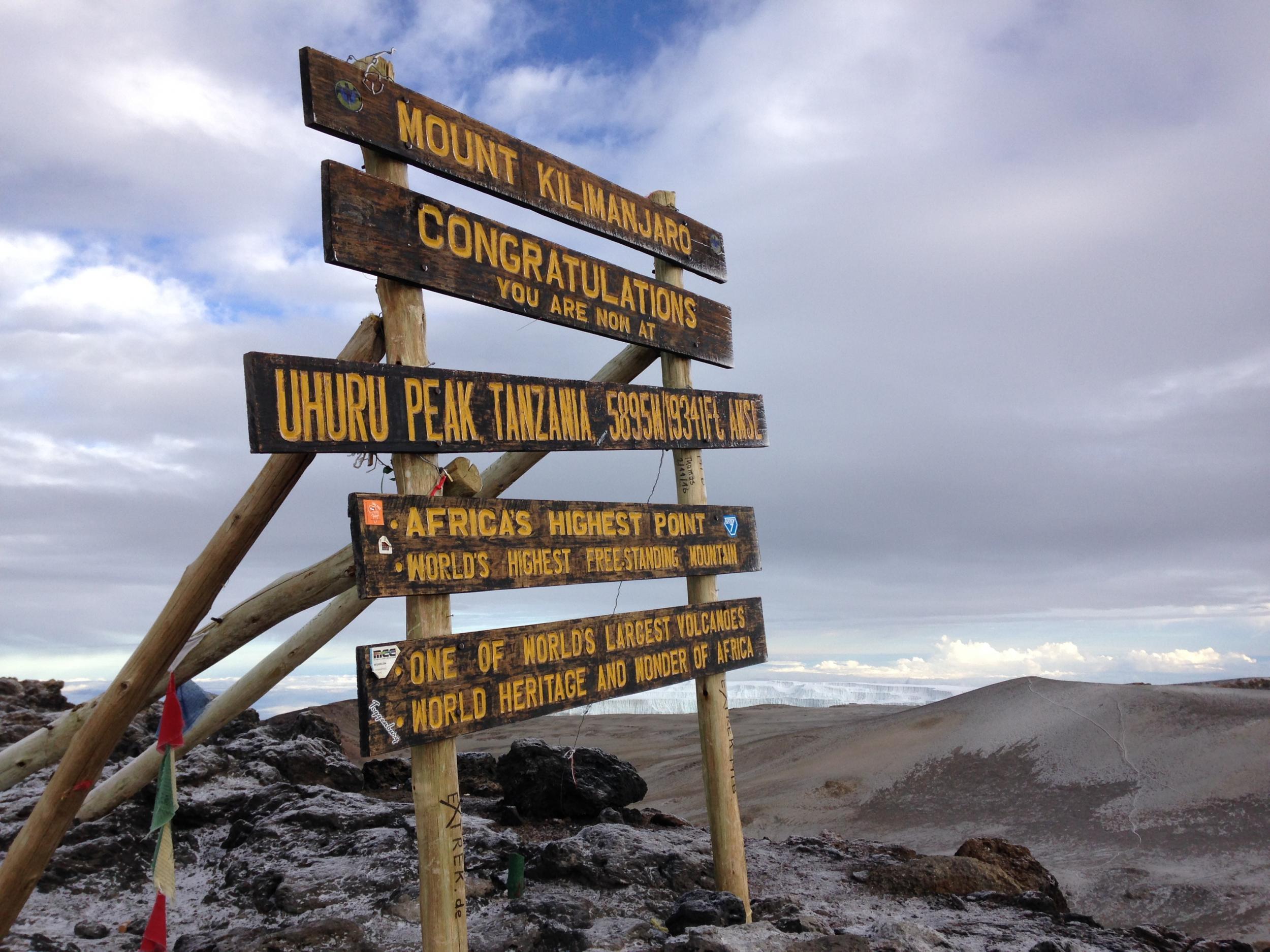 The Altitude Centre (020 7193 1626; altitudecentre.com) offers mountaineering consultations from £128 and training sessions from £28.