At least I had the foresight to book a hotel directly opposite Mount Agung.

I’m on Mangsit beach, on the western coast of Lombok, the lumpy island just to the east of Bali. We arrived on Friday to blue skies, palms flushed green with rain and empty roads (everyone else was in Bali, or on the 18-30 party isle Gili Trawangan).

And on even emptier Mangsit beach just north of resort town Senggigi, we’ve got a front-row seat across the Bali Sea to the only show that matters in Indonesia right now: Mount Agung’s eruption.

On Friday, it was business as usual. We raced happily along Lombok’s dilapidated coast road on a scooter, stopping for skewers of chicken satay and bottles of Bintang beer at downbeat restaurants. I put a frangipani behind my ear and Instagrammed the sunset.

Saturday, it started to rain. After reading online reports, I realised it was ash rain: Agung was blowing smoke to the east and dousing Lombok’s capital Mataram. But the weather was terrible, and clouds obscured Agung almost completely.

By Sunday, the WhatsApps and emails from family and friends about our proximity to the volcano started. Agung had started to puff black plumes of smoke and ash into a high cone, mixing with the white-grey clouds. The whole sky looked dark. We went out for dinner on the beach, but the air felt thick and oily. The moon was dusky and ringed by a heavy band of ashy fog. The air looked brighter around Agung, but I couldn’t see whether it looked like orange lava. Our clothes smelled like wood smoke. 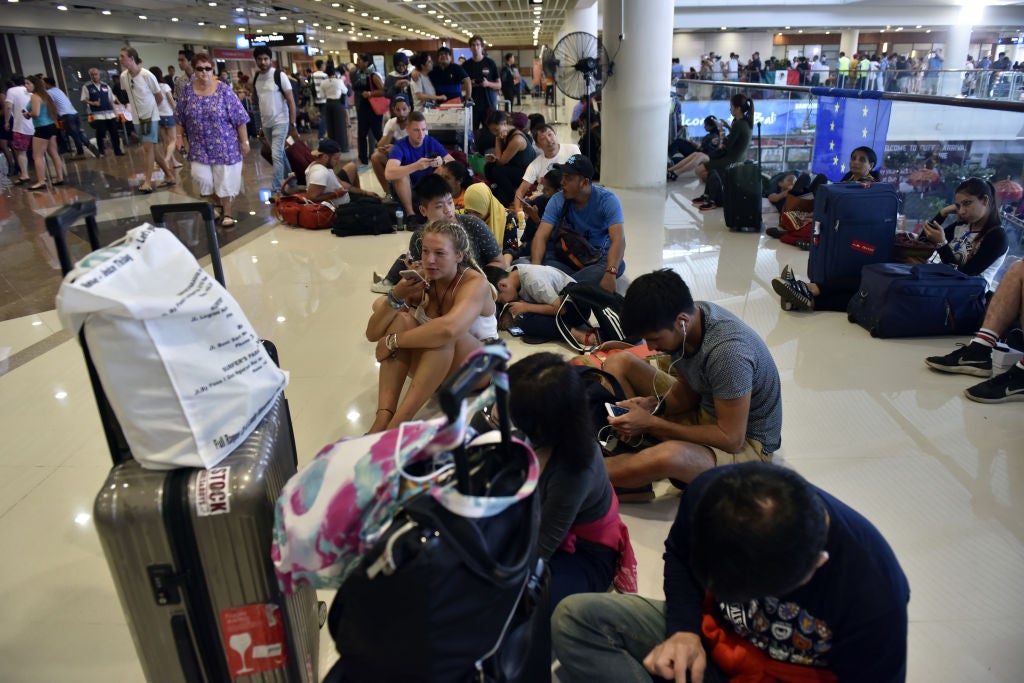 Monday, today, right now. We woke up to wholesale cancellations of flights from Bali’s Denpasar airport, from which we were supposed to be flying home to Hong Kong very early Tuesday morning. The airport is due to open, we’re told, at 7am Tuesday morning. Given that Indonesia’s National Disaster Management Authority says a larger Agung eruption is “imminent”, we’re not hopeful.

And so we tried to book an increasingly confusing array of connecting flights via Lombok airport, a small international terminal. The airport was closed on Sunday as the ash blew eastwards, but tentatively reopened earlier on Monday (today) – supposedly. I’ve checked their departures/arrivals flight status every 30 minutes or so and everything – bar a handful of flights from a very punchy airline called Batik Air – is cancelled. One domestic flight I tried to track using Flight Radar even returned the status “unknown”.

And so we’re stranded at our hotel in Lombok, not knowing whether the wind will blow the volcanic ash particles so dangerous to airplane engines towards us, away from Denpasar, or will coat Bali and Lombok entirely until Christmas. Plus, we’re still a two-hour boat journey away from Bali’s Padang Bai boat port – and unsure about whether to go back to Bali, or stay on Lombok. The price of flights – which, frustratingly, you can still book from Lombok airport, though they’re likely to be cancelled at some point the next day – are stratospheric. I asked my hotel’s front desk how long it took to get a boat to Jakarta: The answer was five days and hysterical laughter.

And so we’re waiting, alongside some other distinctly unfrazzled couples in our hotel, to see what our next move is. My husband had a massage, I answered some emails, washed my underwear in the hotel sink and asked about more contact lens fluid. I waited to hear whether an overpriced flight to Macau via Jakarta would be confirmed. (It’s looking likely that the way home might actually end up being a boat to the Indonesian capital.)

But right now, my very chi chi boutique hotel is putting on an Indonesian “market” dinner with some out-of-tune folk music to accompany. It’s happy hour and I’m writing this with an icy glass of Bintang beside me. There’s a friendly barbecue restaurant up the beach and the nightly entertainment – ashy, spewing Agung – doesn’t show much sign of stopping.

Lima and its museums ·