The sun was just starting to appear from behind the mountains of the Valley of Teotihuacan, northeast of Mexico City, as flames were pumped into the hot air balloon that we would soon be climbing aboard. All around me, people with tired eyes from their pre-dawn awakening were trying to keep warm in the early morning freshness, sipping greedily on hot coffees.

The huge balloon inflated slowly as the crew pulled the basket upright and called us to climb in. The excitement and trepidation were palpable – we all paid serious attention to the safety information and practised the bent-kneed landing position as instructed.

A few more pumps of the gas and ejections of fire into the balloon and our basket started to rise up from the ground. The take off was so gentle that nerves drifted away as the balloon floated upwards to join an array of its kin, all flying above the pre-Colombian city of Teotihuacan.

First established in 100 BC, Teotihuacan became a large, important destination, with a population of between 125,000 and 200,000 at its peak. Foremost a religious centre, it also contained living spaces for the city’s many inhabitants. It was abandoned in 530AD, perhaps as a result of nearby volcanic eruption or possibly due to invasion, and was left in ruins until the arrival of the Mexica (also known as the Aztec). They discovered the city when they settled in nearby Tenochtitlan, now modern day Mexico City, and gave it the name Teotihuacan, meaning The City of the Gods or The City of the Sun, depending on the translation. They believed it was where the gods created the fifth and current sun and the Mexica emperors were known to make pilgrimages there.

Our own early morning pilgrimage was clearly nowhere near as arduous. Collected from Mexico City and driven the 40 minutes to Teotihuacan as we snoozed intermittently in the back seat, we were now being flown deftly through the air by our pilot, admiring the incomparable sight of balloons silhouetted by the sun behind us. 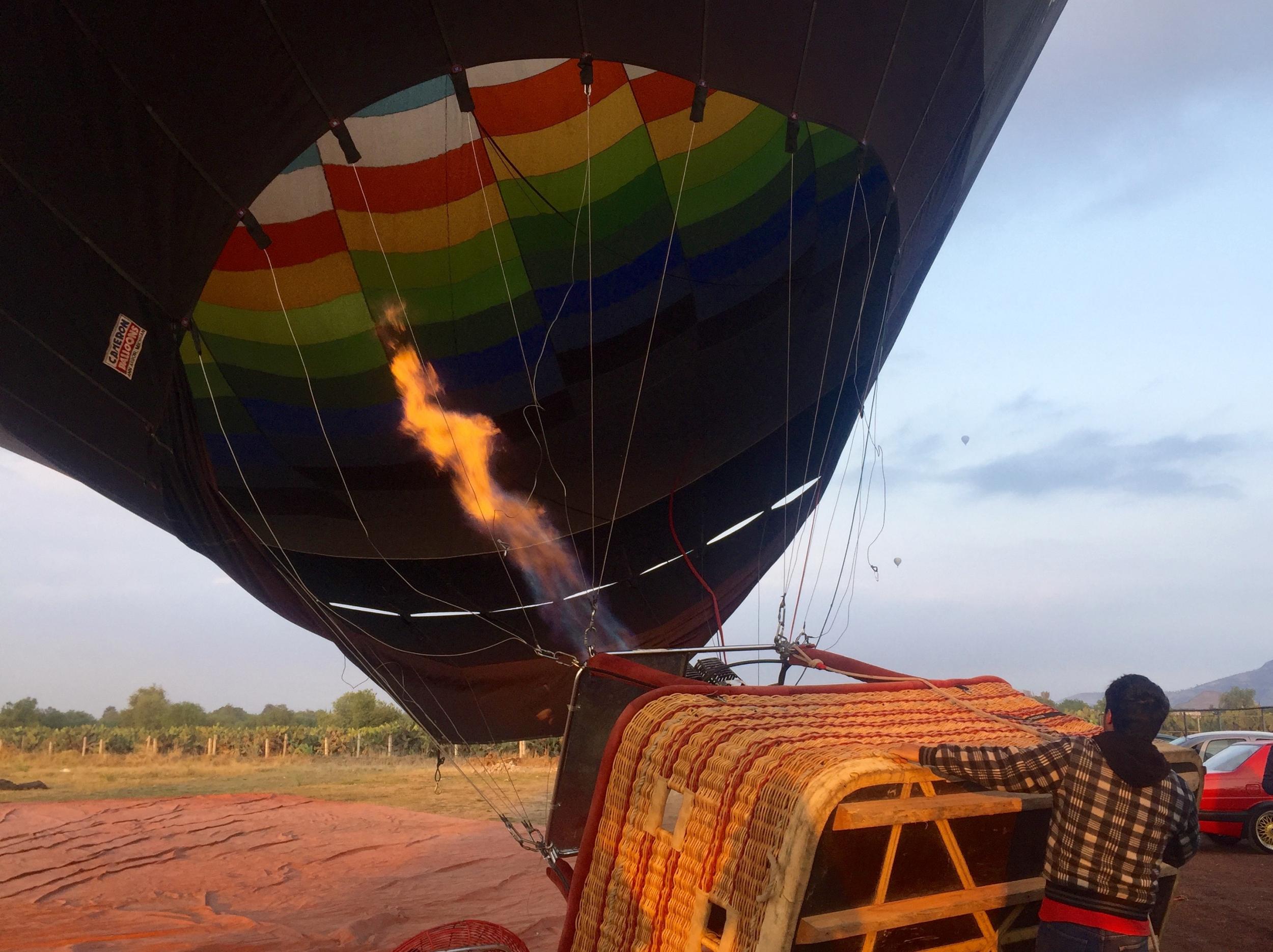 The plethora of Mexica gods were never far from my mind as we climbed higher into the sky, the wind guiding us ever closer to the archaeological site. Teotihuacan has long been a place that leaves me in awe but never more so than when seen from above. It means observing it in a way that those who built it never did – seeing it from the perspective of their gods. Would this be the view enjoyed by Quetzalcoatl the feathered serpent god, who was also related to the planet Venus, the morning star?

This connection to the stars and knowledge of the celestial world is apparent in the construction of Calzada de los Muertos, or Avenue of the Dead, the main road that runs from the Pyramid of the Moon to the Citadel and the Pyramid of Quetzalcoatl. It extends for three miles in a perfectly straight line, an incredibly striking sight from the air. 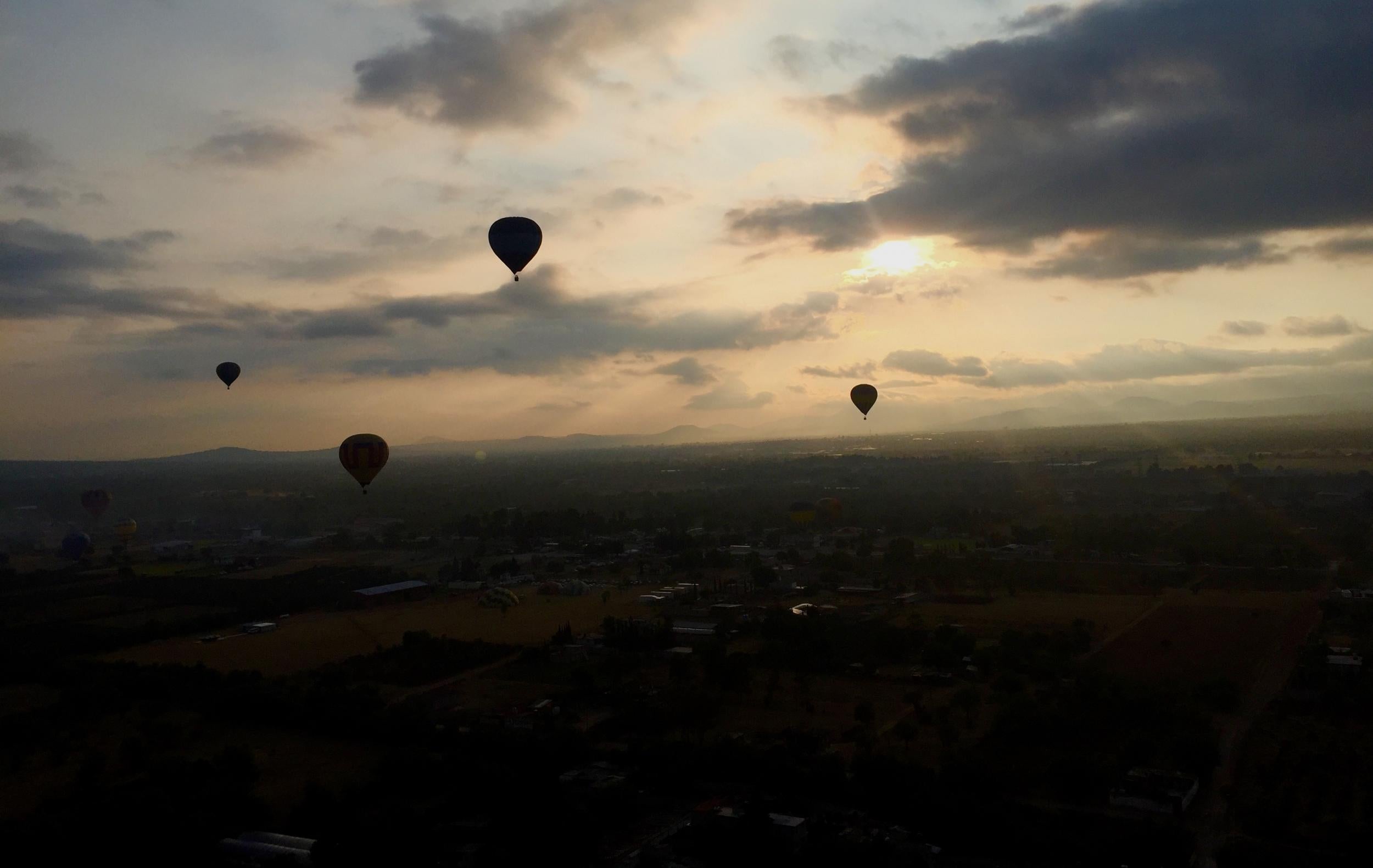 Sacrificial victims would have walked along that three-mile path before climbing the Pyramid of the Moon to have their beating hearts ripped from their bodies as an offering to the ever-hungry gods. The inhabitants of Teotihuacan believed that without such sacrifice the sun would have refused to rise or the rain would have stopped falling.

It’s hardly surprising, then, that the city was built with these gods in mind. The orientation of the Avenue of the Dead ensures that on certain dates of the year it is perfectly aligned with the setting sun; rituals were timed by the appearance of Venus along the avenue. The Pyramid of the Sun is aligned with the rising sun and Pleiades during the Spring Equinox, and archaeologists have found that the city was built in a grid pattern with intersections every 57 metres.

It’s almost impossible to imagine how the ancient architects of Teotihuacan were able to build a city with such precision more than 2,000 years ago, without the use of modern tools and equipment.

As we continued to drift above this incomprehensible feat of architectural prowess, I realised there’s no better way to see the astonishing accuracy with which this city is built than from the air, as the sun rises behind the Pyramid of the Sun. The connection between sky and earth became unmistakable as we floated under the clouds.

By the time we started our descent, almost an hour later, the sun was in its full glory, risen again – despite there being more than 500 years since the last Mexica heart was fed to the gods.

Aeromexico flies direct from Heathrow to Mexico City from £609 return. Transport to the Valley of Teotihuacán can be arranged with Flying Pictures for an extra fee.

The centrally located Barceló Mexico Reforma in Mexico City has doubles from £75, room only.

Flying Pictures offer flights above Teotihuacán starting at £90 per person including a post flight toast and breakfast.