There was an uproar at the Casa Rosada in July 2017, the day chef Dante Liporace introduced a vegan menu to the staff canteen. Some stormed off to McDonald’s to buy burgers, then posted selfies of them eating them inside the Argentinian presidential palace in defiant protest. The number of staffers dining in-house slumped by 93 per cent.

Liporace was not surprised. “Lunes Vegano”, or Meat-Free Monday, was always going to be controversial in a country which, per capita, is second only to Uruguay for its beef consumption. Launching it at the heart of government was even more so.

Many steak-loving civil servants found it hard to stomach Liporace initiating such a move. Confused, too – because in Buenos Aires, the chef is known for creating the “Sequence of the Cow” head-to-tail tasting menu that includes brain and oxtail. But it wasn’t down to him. In June, Fernando de Andreis – General Secretary of the Presidency of the Nation, working under President Mauricio Macri – suggested that, in a bid to eat more healthily, staff at the Casa Rosada should try having vegan Mondays. Where better place to start practising what you preach than at the heart of government? He asked Liporace to put together a three-month trial run.

This is the second culinary shakeup Liporace has been involved with since he took over the reins at Government House’s kitchen two years ago. The initial challenge was getting the canteen – whose subsidised daily meals used to be served on prison slop trays for a piffling AR$3 pesos (13p) – up to scratch, and turning a profit. That move was a success: three months in, the canteen had gone from serving around 50 meals a day to dishing up more than 600, at a more reasonable AR$65 pesos (£2.86) each. He was also including daily vegetarian and gluten-free options. 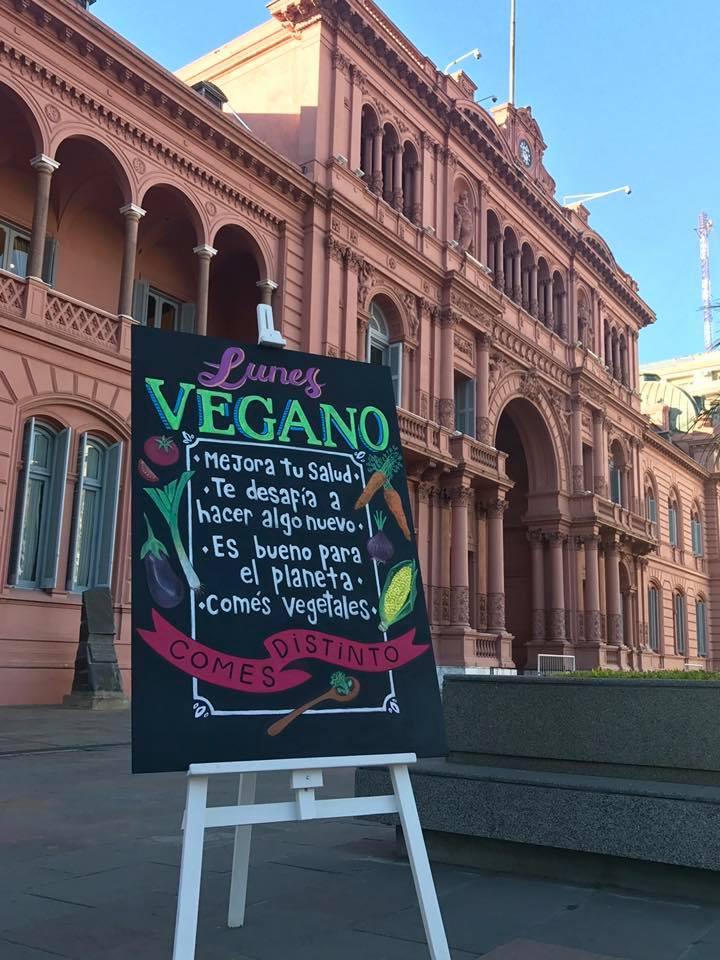 But it’s one thing to add a vegetarian option, and quite another to make the menu vegan once a week. Especially in a country where the average inhabitant devours 57 kilos of beef per year.

“I got the call to start making healthier dishes once a week so I looked into creating a 100 per cent organic menu,” Liporace tells The Independent. “But it simply wasn’t cost-effective. So, from one day to the next, it was decided to make the Monday menu totally vegan. That way, people didn’t have the chance to say ‘I won’t go for the vegan option today’.”

That first Lunes Vegano didn’t go so well – a mere 40 diners turned up, instead of the usual 600. Liporace had sprung it on the employees, without priming them in advance. Instead, he let a blackboard do the talking, with statements chalked on it: “It will improve your health, it challenges you to do something different, it’s good for the planet”, surrounded by arty drawings of aubergine, leeks and corn on the cob. It was a shock to the system – and possibly the worst way for politicians and civil servants to start the working week.

“That first day was terrible,” says Liporace. “All three options were vegan and all anyone wanted was meat. I got loads of abuse for it. People don’t realise that they miss meat until you don’t offer it to them.”

After forcing the issue for three consecutive Mondays, he relented, ditching the forced veganism and including a plant-based dish alongside meatier options. Reverse psychology, it turned out, was the way forward. By the fourth week, 250 people picked the vegan dish, even against more traditional options. “People have got used to it quite quickly,” he says. 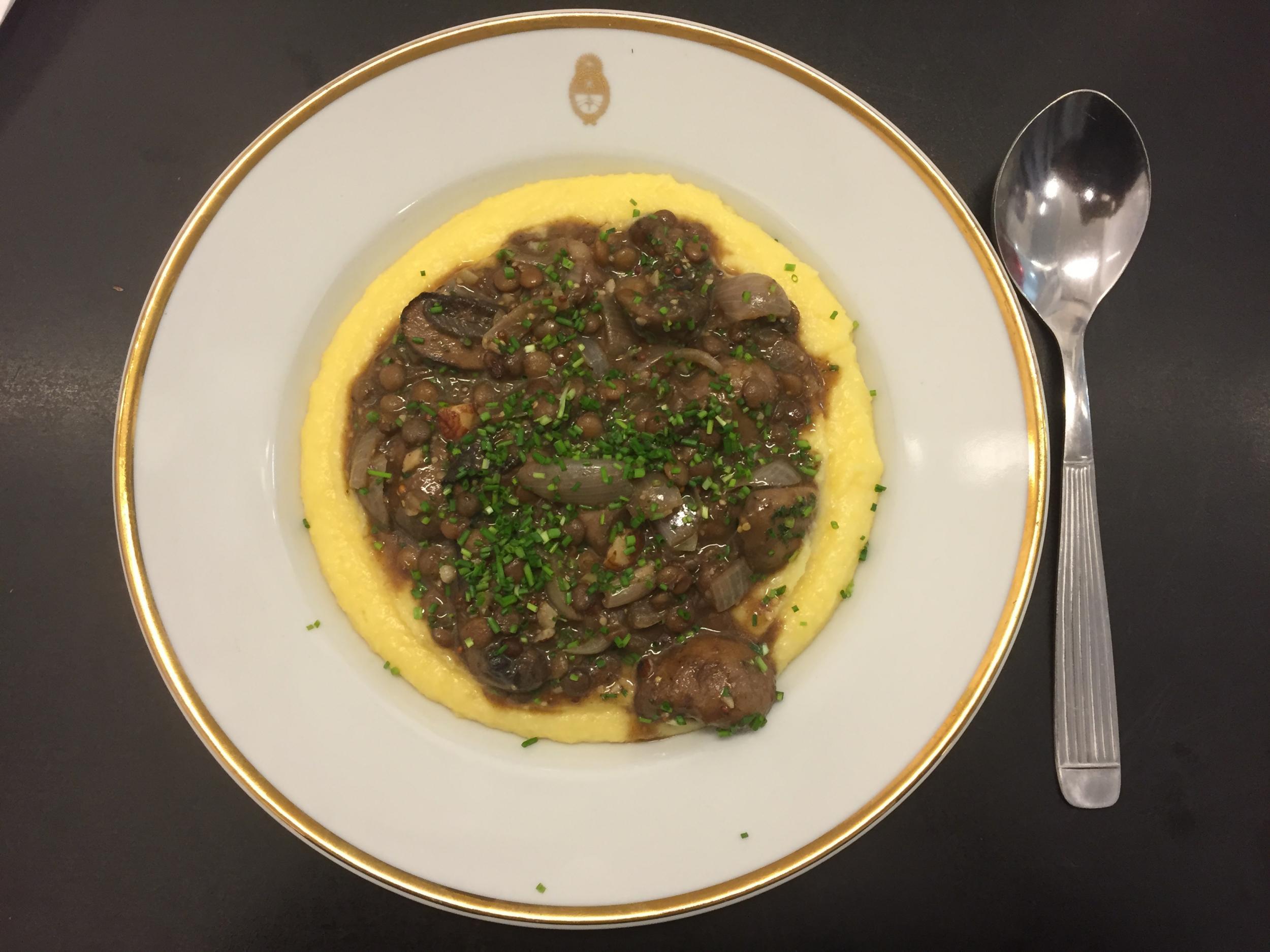 Besides convincing his diners, including ministers and visiting dignitaries, to give into veggies and pulses once a week, it’s been a challenge for the El Bulli-trained chef to come up with creative – and tasty – fare. “The hardest part has been replacing dairy products in desserts,” he says. “My team has also had to get used to working with tofu, which many of them have never cooked with before.”

The three-month trial did so well, that now the Casa Rosada is planning to bring Lunes Vegano back on a permanent basis this year.

They’ve tried plenty of dishes so far – a tofu and vegetable tart, a nut risotto. But, says Liporace, the most popular one to date has been polenta with mushroom, lentil and hazelnut ragout. Analia, a waitress at the Casa Rosada, agrees: “I really liked the polenta. It’s my favourite so far,” she says, enthusiastically.

As for the man in whose name this initiative was created, President Macri himself has ordered from the vegan menu, says Liporace. He’s a fan of the cheese-free aubergine “parmigiana”, and loves the chef’s take on gazpacho – a tomato and green apple soup. Which is, even without the Meat-free Monday designation, vegan.

Journey Latin America has a three-night city break to Buenos Aires including flights, transfers, B&B accommodation at the Kenton Palace Hotel and dinner with a tango show, from £995.

Enjoy the winter sunshine at the Fraser Coast's Outdoor Festival ·