“We train Nato soldiers during the week,” said my guide Rene. “They are not as good as you would think though; they’re always capsizing or complaining they’re tired. But then, they are training in harder conditions that this.”

Welcome to kayaking on the Baltic Sea.

The Nato soldiers in question are posted to Estonia and other Baltic states and have to learn how to kayak to hone their military skills.

Me? I’m on a more leisurely two-day paddle with a group of fellow adventurers from the UK around Väike-Pakri, the smaller of a set of two islands located in the Gulf of Finland. It’s about two miles off Estonia’s northwest coast and one hour from capital Tallinn.

Our route is to circumnavigate Väike-Pakri, covering around 12 miles, before returning to the mainland.

Given that my previous kayaking experience is limited to lakes and rivers, 12 miles seems like a long way. I’m left wondering if our 10-minute briefing on how to kayak on the sea was enough.

We headed out across the Kurkse Strait, which separates the island from the Estonian mainland, into a strong headwind. I was soon reminded of Rene’s last words: “The waves are your friends.” 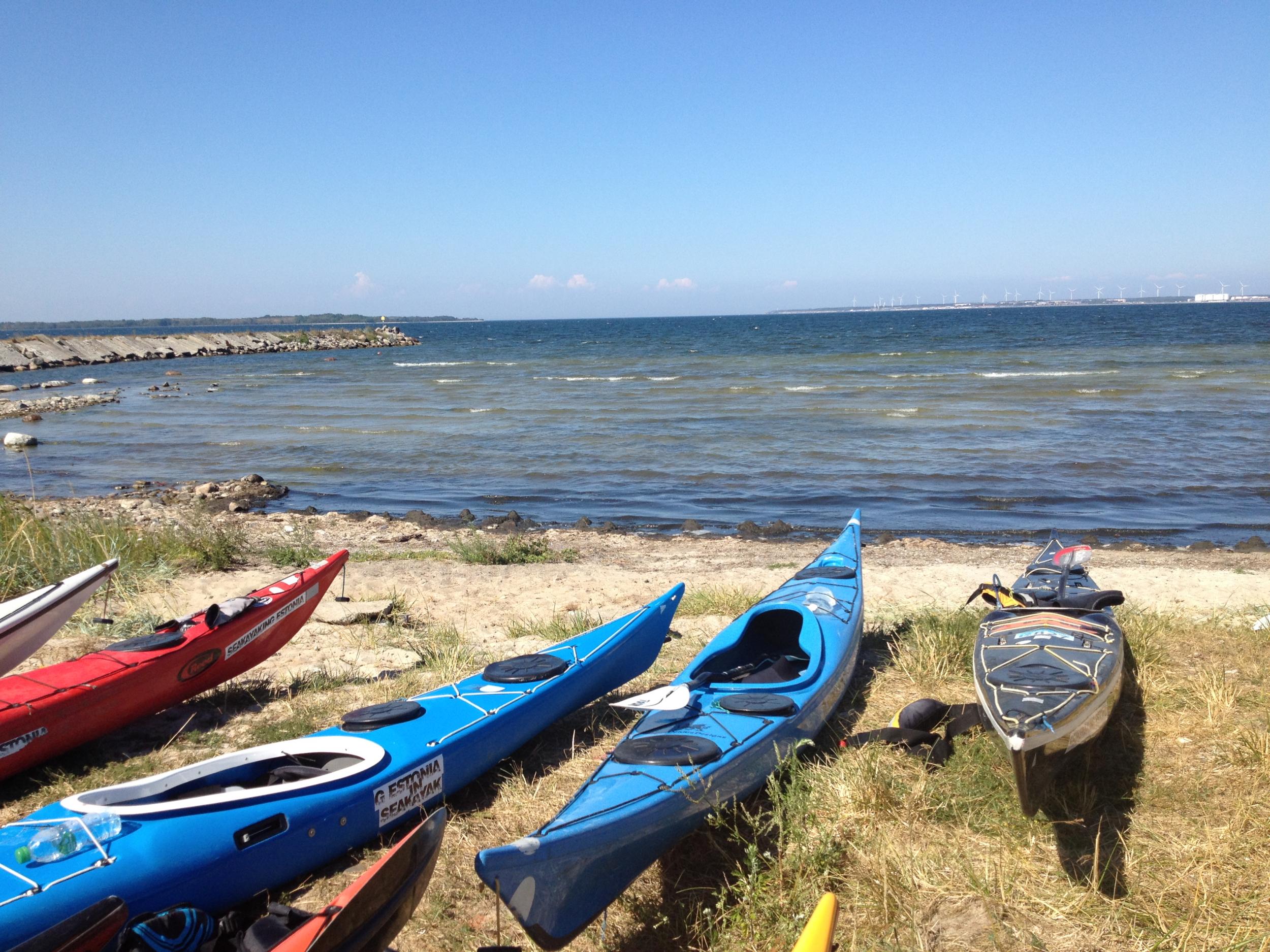 They weren’t so friendly moments later when a huge one almost swept me under. Only a minor setback. I regained my balance, dug my paddle in deeper and pressed on.

Having paddled for what seemed like an eternity (though in reality it was probably 10 minutes) the shore ahead still looked as far away as ever. When we did finally make land on Väike-Pakri 40 minutes later, it was a welcome opportunity to get out, stretch our legs and admire the scenery around us.

Having caught our breath we set off again, hugging the island’s shoreline as we made our way towards a beach about half way up the eastern side of the island, laden with beer and crisps, that would be our camp for the night. 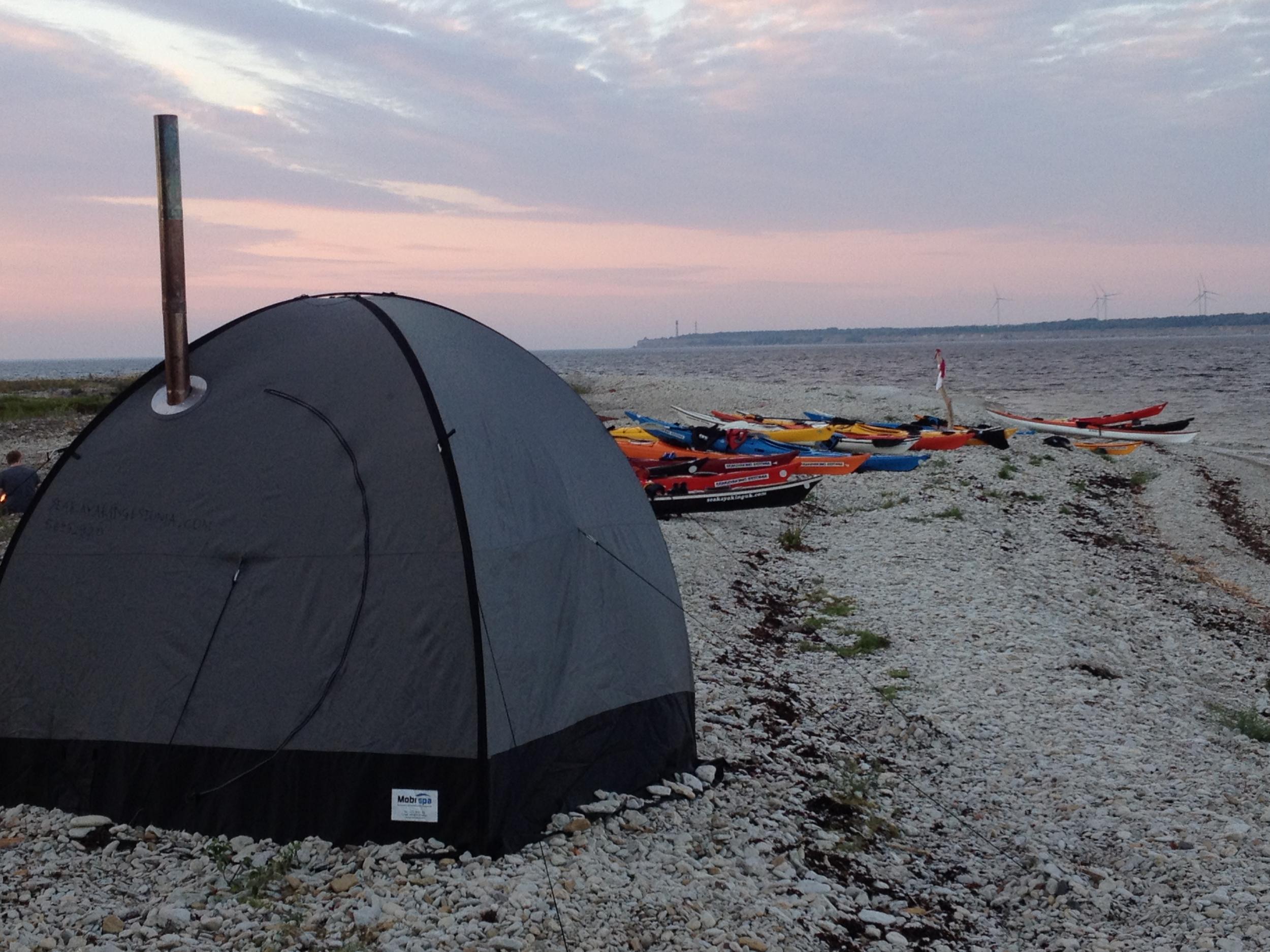 After a quick change of clothes we set off on a two-kilometre hike inland to Suurküla or Big Village (incidentally Väike-Pakri’s only village too). It was a scene straight out of Deliverance: stacked woodpiles built for the winter when the temperature drops below freezing and livestock roaming free among the machinery. But the place is devoid of people; the island’s 15 inhabitants have got somewhere better to be on a Friday night.

Ushered into the village’s communal hall where the residents gather for meals, we sat down to a dinner of veal in sauce, boiled potatoes and vegetables grown in the next-door field.

We didn’t hike back. The head farmer pulled up in front in his old Soviet-era tractor and offered us a lift back to the beach. We hitched in a rickety wooden trailer on the back, which felt like it was going to fall apart at any moment.

Back at the camp, we gathered around a beach campfire as our hosts hastily assembled a pop-up sauna tent (when in the Baltics…)

Sitting back and listening to tales of adventure on the River Nile from another of our guides, Kessu, over a beaker of wine. Looking out across the water shimmering in the eternal sunshine overhead that is synonymous with the long days of the Estonian summer, life felt like it couldn’t be more perfect.

Or could it? The sauna was ready, so we filed off in threes and fours to go and sweat it out in the tent before racing into the Baltic Sea to cool off.

The next day we were up early, heated by the sun beating down on our tents.

After a breakfast of rye bread, yoghurt and blackcurrants, much of which was spent trying to avoid the local wasp population who had decided to join us, we repacked our kayaks and set off. 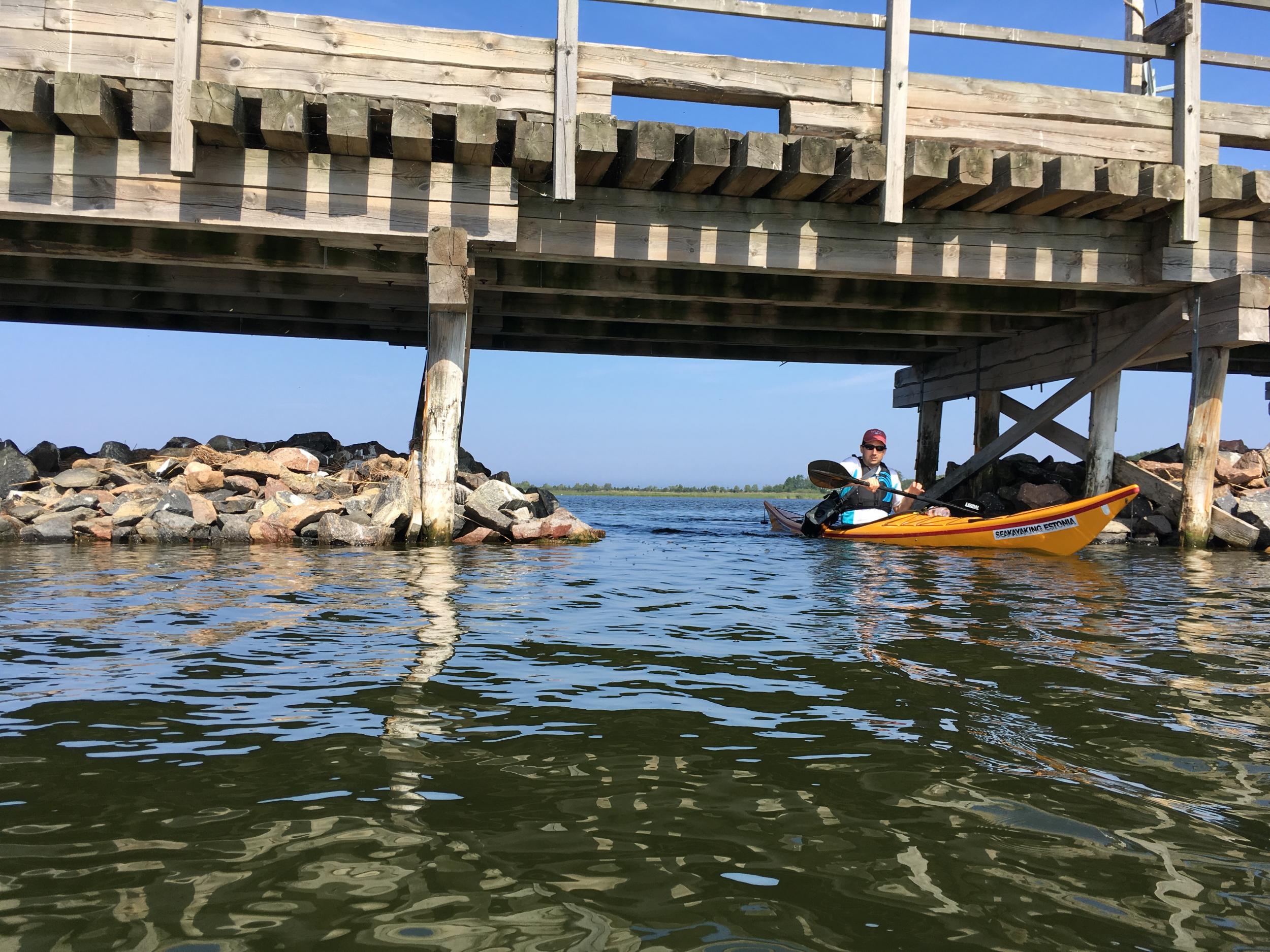 With a strong easterly wind buffeting our kayaks, Rene shouted at me to paddle towards the shore after one particularly large breaker almost wiped me out.

As we worked our way along the coast, the landscape suddenly changed, giving way to dramatic limestone cliff faces, which make up the 750-mile Ordovician Period Baltic Klint that stretches all the way from Sweden to Russia.

Legend has it that, in the 18th century, Catherine II had ordered a dam to be built linking Väike-Pakri to mainland Estonia, but every time her servants tried to lay new foundations they sank without a trace into the seabed.

The next danger was in the form of large rocks just beneath the water’s surface, which we had to weave our way through as we turned the corner into the strait between Väike-Pakri and its larger counterpart Suur-Pakri.

And as we followed the shoreline towards the northern side of Väike-Pakri, the rusting hulk of a boat reared up in front of us. It was one of the many decommissioned vessels requisitioned by the Soviet Union, which had sailed them into the channel between the two islands and used them as target practice for military aircraft bombing. 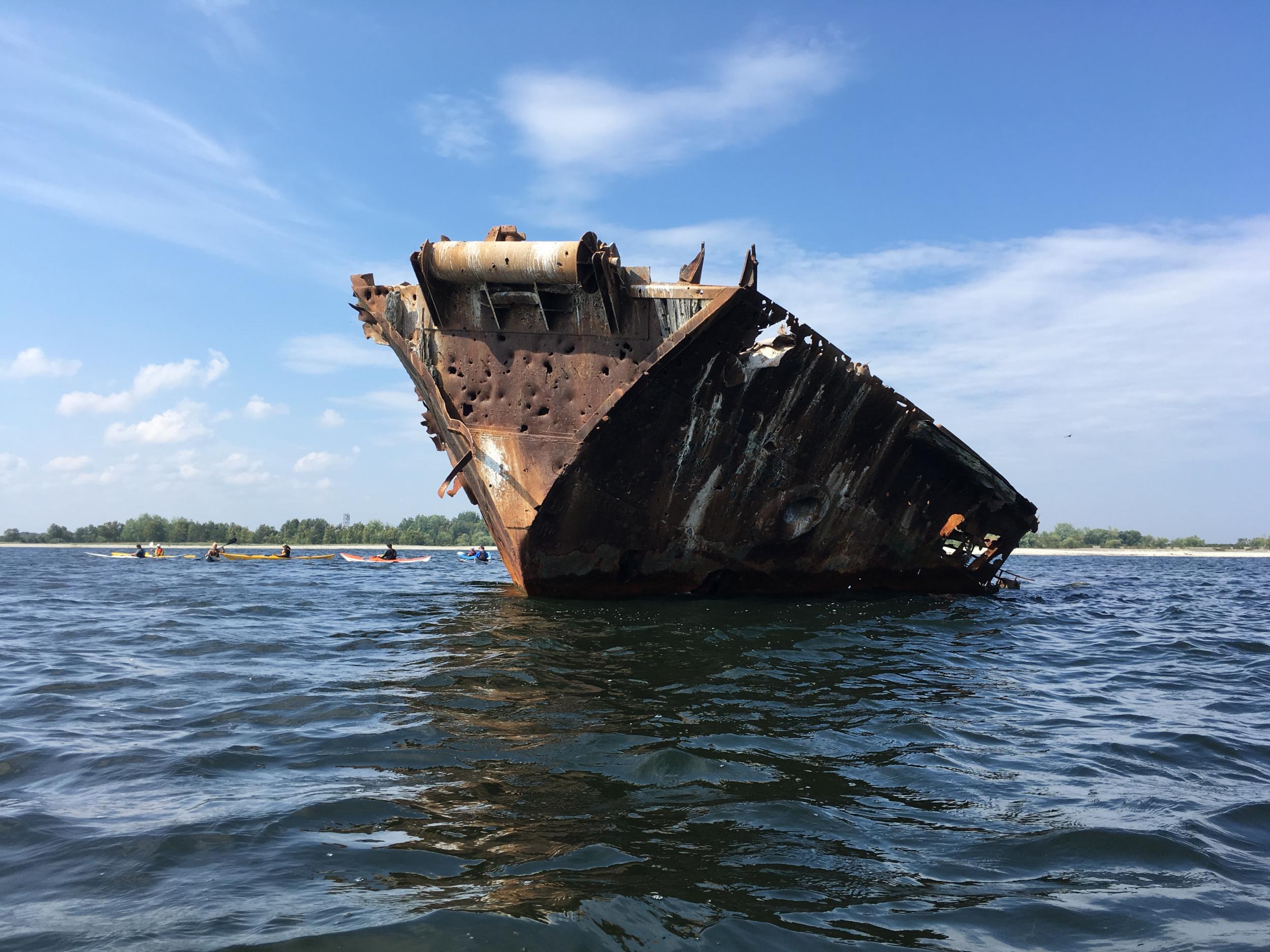 Dodging the gun cartridges and cowpats strewn along the beach opposite (although I had yet to see a single cow), we tucked into our picnic with gusto in preparation for the final and most gruelling leg that lay ahead – crossing the open sea between Väike-Pakri and the mainland.

Passing alongside reeds and under low bridges, we meandered our way towards the Kurkse Strait we had crossed a day earlier. Instructed to paddle together as a tight-knit unit to avoid being swept away, we braced ourselves as we headed once more into the full force of the wind.

Setting our sights on the far peninsular jutting out from the mainland so that the tide would sweep us back into shore, we soon settled into our rhythm.

Stretching every sinew, we cut a path through the whitecaps until we reached the calmer waters of the harbour and let the tide do the rest.

Leaping out of our kayaks, we allowed ourselves a moment to float in the warm shallows of Kurkse beach among the Estonian families who had flocked to the beach for the day. The only difference was they hadn’t just kayaked 12 miles.

12 most unusual places to stay in Ireland