“This artwork shows our story,” my guide Kally says, gesturing towards a huge painting on the side of an apartment block, depicting a black woman putting on a white mask. “Until a few years ago, people from this neighbourhood couldn’t even get jobs if employers found out where we lived, so we used fake addresses. Then at the end of the day we would come home, take off our masks and become people from Quinta do Mocho again.”

Located half an hour outside of central Lisbon, Quinta do Mocho is one of the city’s many social housing projects, built cheaply and quickly in the 1990s and cut off from the main city thanks to a lack of public transport. Its residents are mostly from the former Portuguese colonies of Cape Verde, Guinea and Angola, and a combination of social exclusion, high unemployment and poor housing standards have contributed to the area suffering from high crime rates and a number of social problems.

However, residents are working to combat their forced ghettoisation by transforming the area into a tourist attraction through the use of street art. Over the past four years, 94 incredible works by artists from all over the world have been added to the sides of apartment blocks. Visitors can come see these independently or as part of a guided tour – an activity I’m taking part in today. 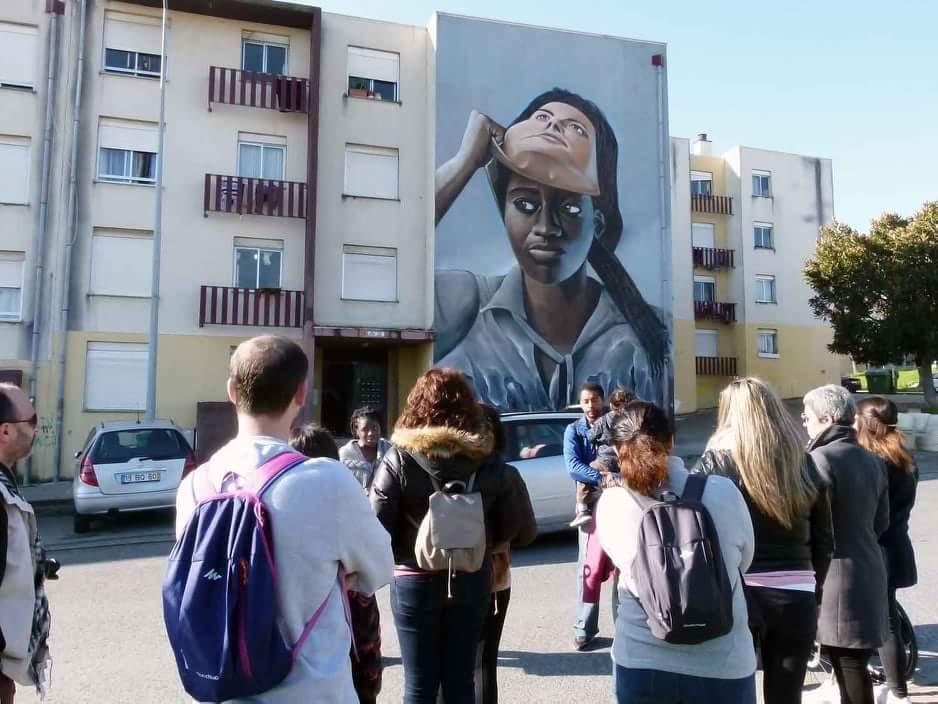 First of all Kally, who was born in Angola and moved to Portugal as a child, takes me to a local cafe where I’m served traditional Cape Verdian bean and pork stew and sticky rice. Between mouthfuls, he explains how the project began in 2014. “This neighbourhood had a really, really bad reputation,” he explains. “The local municipality organised an urban art festival, with the aim of opening the neighbourhood up to wider society. We had six artists creating work, and local DJs played.”

The three-day event didn’t run completely smoothly – on the first day, men from a rival estate drove in and shot two boys in the middle of the street. But the artists involved told their contacts, and the following year the festival attracted twice as many artists, and has continued to grow annually. Although the municipality has taken a step back, residents have chosen to maintain the project and now offer guided tours to visitors. “Because we are from here, we know about the community and the meanings behind the artworks,” Kally says.

He gives a realistic assessment of the impact on residents’ day-to-day lives. “If you ask most people here what’s changed for them since the start of the project, they’d say nothing,” he says, adding that most housing on the estate is inadequate – “they’re the cheapest houses you can build, so they’re freezing in winter and boiling in summer” – and unemployment is around 70 per cent.

“However, the neighbourhood has changed, because it’s not just the people who live here walking down the street, it’s people from everywhere. And we have regained something that was lost in this community – self-esteem.”

I ask Kally how he ensures the tours don’t descend into “poverty safaris” where rich tourists come to gawp at those living below the breadline. “When people first started coming they would photograph everything, as it was all new to them,” he explains. “It was like they were coming to a zoo, and the community did not like it. So we made it forbidden to photograph children. 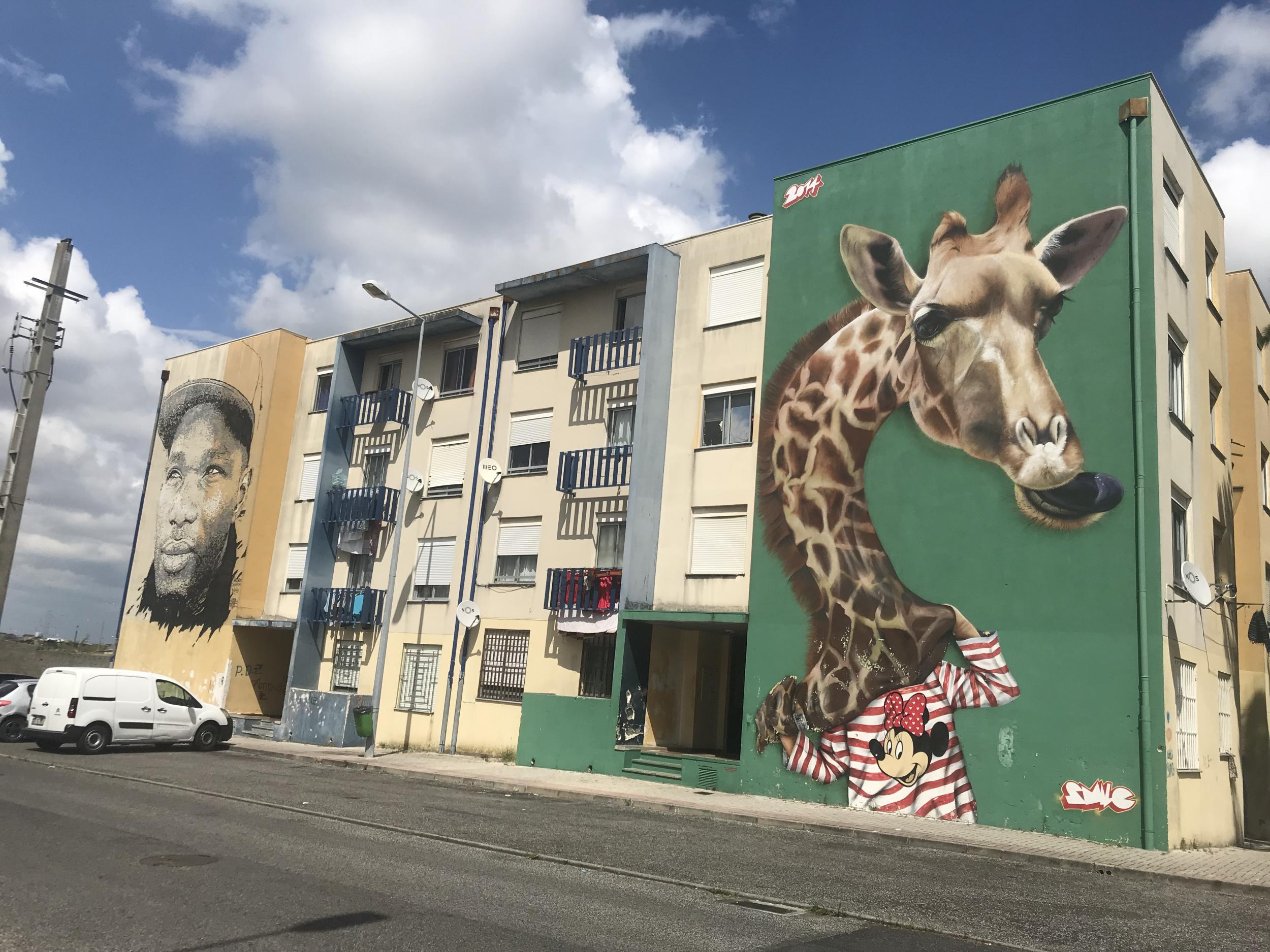 “These days the tours feel more respectful. People come to see the art, they learn about the community when they hear the stories behind the art, and are curious to know more.”

We finish up our lunch and wash it down with strong espresso, then venture outside to start the tour. The artworks themselves are varied and incredible, ranging from photorealistic portraits to surrealist lettering, to a huge bird sculpture made from discarded car parts attached to a wall. Many were created collaboratively with the community – one shows a child painting drawings created by kids in the local school. Another building is painted to look like a discarded cardboard box, and represents Europe’s treatment of immigrants – “we are just uprooted, then not placed properly in society”. 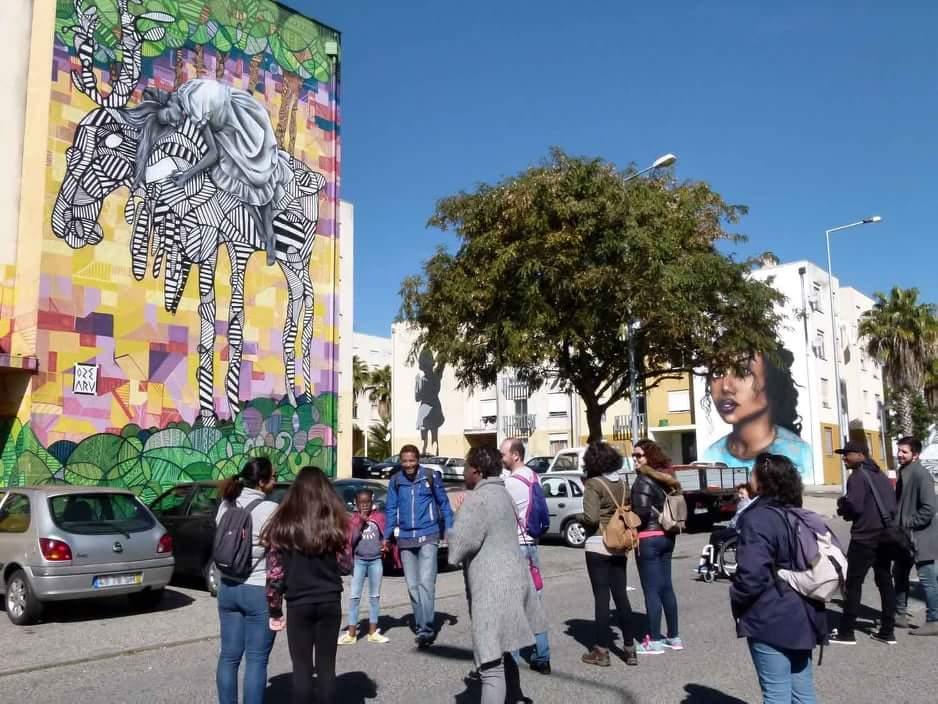 I ask Kally to elaborate on what he means by the project giving back self-esteem. “It’s changed outsiders’ view of the area,” he says. ‘We’ve gone from being a dangerous neighbourhood to one that’s an example to others. Before, our kids wouldn’t get invited to the birthday parties at school. Nowadays, all those kids want to get invited to the parties here. We have great parties – the best afrobeat DJs in Portugal all live here.”

He also explains that the tours have helped combat crime. “We use the visitors as a shield,” he explains. “When it’s African-on-African crime, the cops don’t want to know. But when outsiders are involved, they’re here in five minutes.” 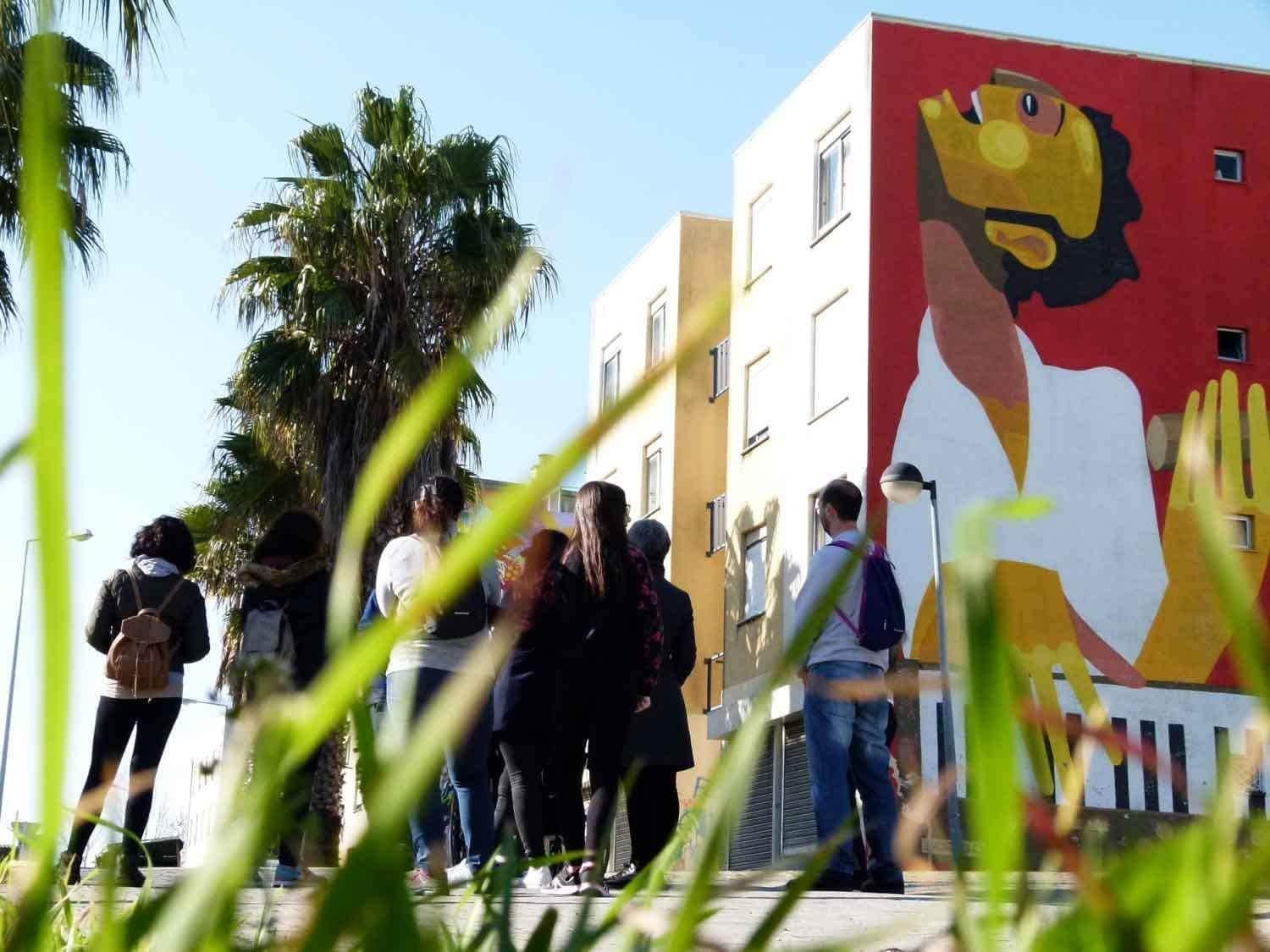 Kally’s next aim is to take the project further, and see how it can be used to improve the community’s lives. “We’re now encouraging entrepreneurship in the community through the tours,” he says. “We have four different African communities here, all with their own cultures, and together we create our own unique culture.

“But mostly, we want to maintain and grow this open mindset.”

To arrange a tour of Quinta do Mocho, visit facebook.com/GuiasdoMocho