Home » Destinations » Europe » If you do one walking holiday this year, make it this one in Georgia

At Mary’s Guesthouse in Mestia, I watch a large dog and two tumbling pups. “See? Their ears are clipped. Tails too,” says Alex Chikovani, my 32-year-old guide. “It gives them an advantage fighting wolves.”

In Mestia, the capital of Georgia’s mountainous Svaneti region, the dogs fit right in. Here, the Caucasus’s rugged 5,000m-plus peaks form the backdrop to Svan villages and their defensive towers, which date back to the ninth century. Joined by Aleksandre Khudiani, a sturdy 25-year-old Svan mountain guide, we set out to the village of Lakhiri, on the first leg of a three-day hike to Ushguli, which is one of Europe’s highest permanent settlements.

Aleksandre fills his water bottle from a spring and pulls on his cap. Together we start the ascent. He didn’t say much (“typical Svan”, tuts Alex). The path enters woodland and rose steeply. Aleksandre swiftly leaves us in his wake.

Svaneti remains little visited by Georgians. Post-Soviet chaos, shocking roads and a brutal six month winter – plus a reputed Svan propensity to banditry – has led to it being the country’s most isolated region. “My father won’t come here, even now,” says Alex as we stop for a breather. “He was robbed by a Svan gang. All the people on the bus – everything was taken.”

But Georgia is changing quickly – and so is Svaneti. The main road to Mestia has been upgraded and the town even has a flight to Tbilisi, cutting out an eight hour drive. And despite the area’s reputation, the new accessibility has kickstarted a tourism renaissance.

Up ahead, where the trees peter out, Aleksandre is waiting for us, smoking a cigarette. A carpet of wild orchids stretch out ahead, with thousands of purple stems standing proud. Butterflies flicker between the flowers and sweetly melodious birds chatter.

Our path merges with a stony track snaking up from the valley and fords a broad sparkling stream. A Russian army truck ploughs along, splashing through the water; we follow its wet tyre tracks to a hamlet of wooden houses, each with a wide first floor veranda. We have arrived at Lakhiri. 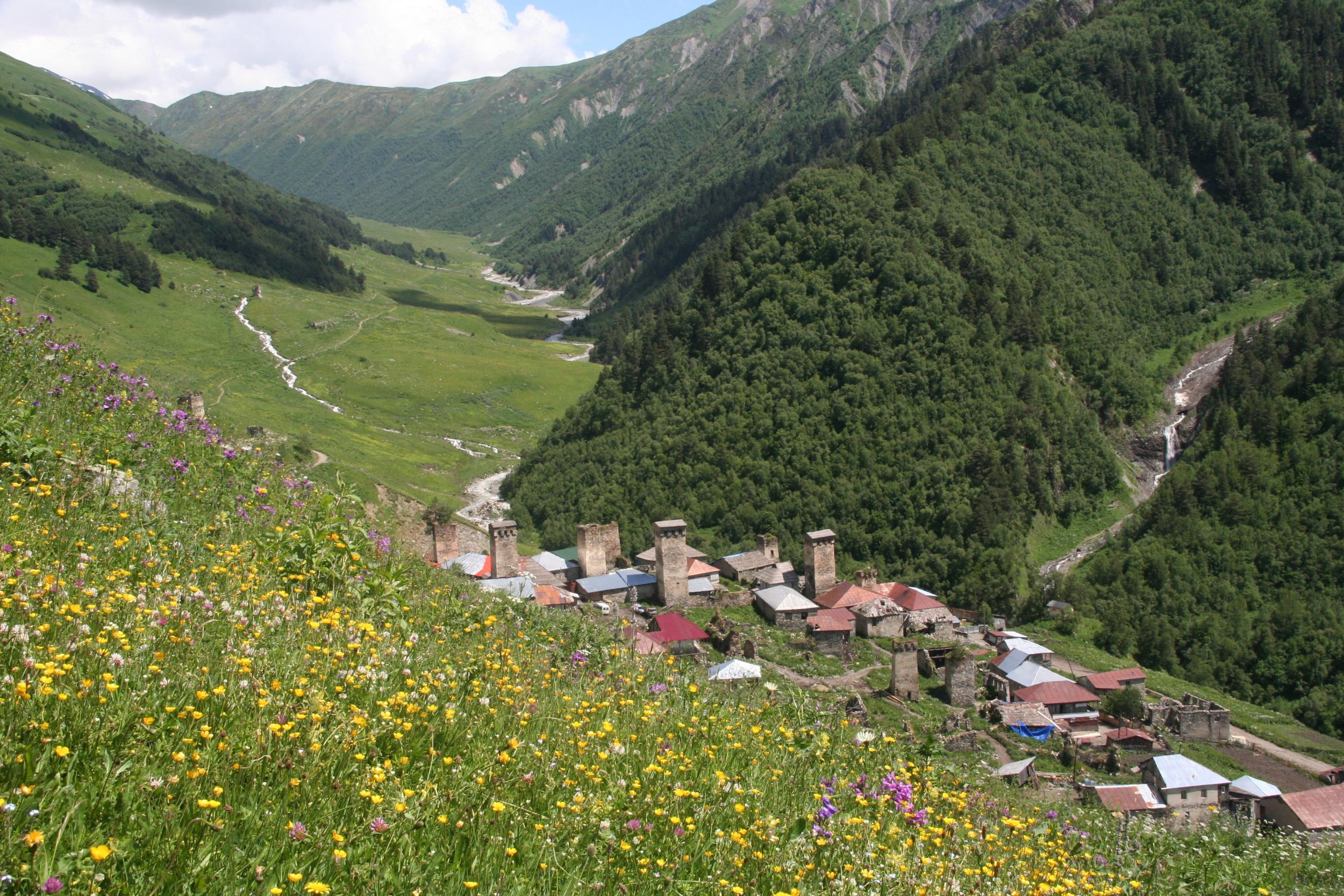 From here on in, the hike is inaccessible – even to 4x4s. Our gear stays with Rames, our smiling support driver, and we set out to Adishi, the next village, carrying only essentials.

“Today we walk to reach the clouds,” announces Alex, gamely, and on cue they part to reveal the summit of Ushba, 4,710m high, brilliant and white. We climb steadily, pausing for lunch at 2,700m. Nearby, rhododendrons gently enfold a decaying Soviet bus into the hillside.

We reach Adishi late that afternoon. Here, narrow lanes snake between buildings in disarray. Crumbling walls, sagging roofs and Svan towers wavering on their foundations. Some buildings have been refurbished – some more sympathetically than others. (Blockwork and UPVC will never be an ideal replacement for stone and wood.)

At our lodgings, a watermelon cools in an old bathtub under a stream of spring water as we share a bottle of beer and freshly baked khachapuri cheese bread. Alex looks at Aleksandre, lost in private thought. “He’s thinking about tomorrow,” he says. “I didn’t want to say, but it’s a killer.” We opt for an early night. 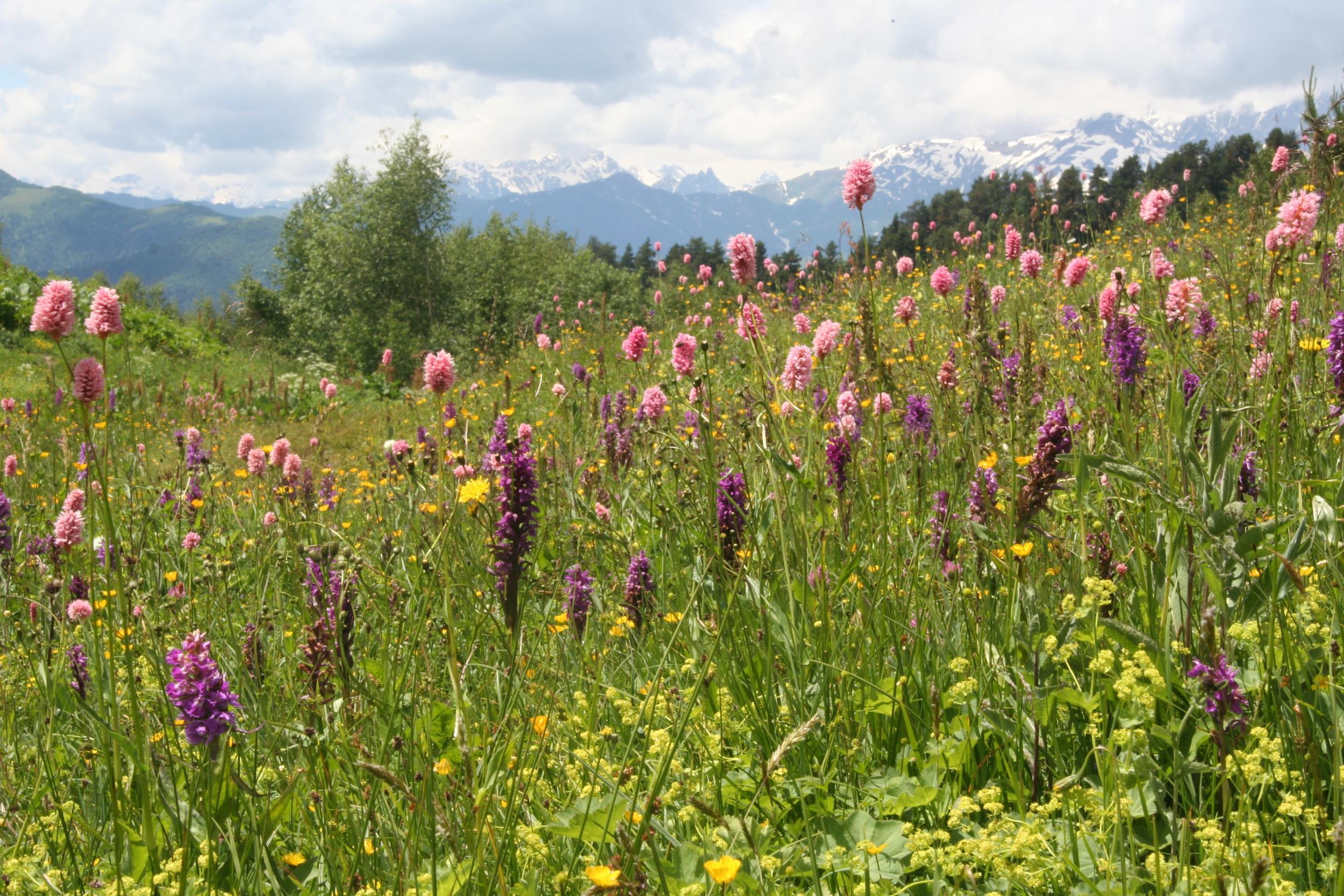 The next morning, we form a straggling caravan of foreign hikers, big dogs, horses ridden by Svan boys, and a nervous foal, all making our way out of Adishi and following the Adishischala River up the valley. The Caucuses dazzle us from on high – the twin peaks of Ushba; Tetnuldi’s broad slopes; Shkhara, the highest mountain in Georgia at 5,193m. Below, blue sky and white snow, and tousled meadows scattered generously with wildflowers.

At the river crossing, cloudy glacial water surges noisily. Two days earlier it had been impassable, says Alex. Horses ferry us across and we press on into chest-high undergrowth, tracing streams and grasping at branches in a steep ascent. Beyond the tree line, the Adishi glacier comes into view: six miles of imperceptibly flowing ice. And at Chkhutneri Pass – a height of 2,620m – we finally catch up with Aleksandre.

Other trekkers are gathering – a mixture of groups and individuals, ages and nationalities, all catching their breath for the walk downhill. At Khalde, a tiny hamlet where bedding is being aired on guesthouse balconies, Alex teaches us some history: “They rebelled against the Russians in the 19th century, and the Russians burned their houses and sent them to jail.” Soviet symbols – the hammer and sickle, or star, feature in fretwork decorating houses that have long been abandoned. 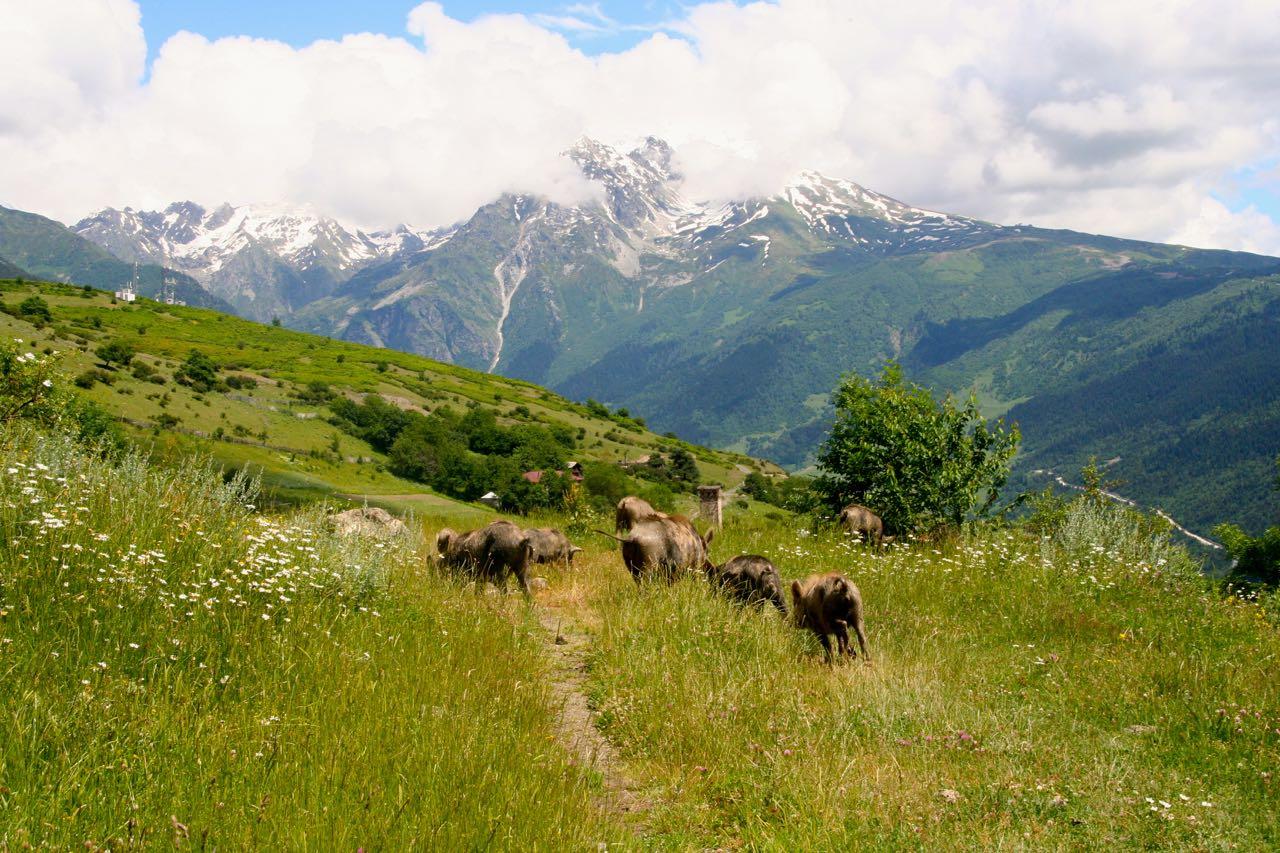 By now the path has become a road again, and Rames is waiting for us. Fifteen minutes in his Jeep gets us to Zhibiani – one of the four villages that make up Ushguli, a remote outpost even for Svaneti.

Not that this is necessarily a good thing. “I’m afraid that regulation might come too late,” says Alex of the tourism boom. “They want to make the most of visitors, and the only reason this village isn’t deserted is tourism. But in doing these ugly things they are not thinking ahead.”

Svaneti has stunning landscapes, outstanding trekking trails and a unique cultural heritage. Let’s hope the price of new prosperity will not prove too high.

Wizz Air flies from Luton to Kutaisi from £66 return. From there, Mestia is a 4.5 hour drive. Otherwise, Georgian Airways flies from Gatwick to Tbilisi; from there, Vanilla Sky flies to Mestia from £19 each way.

TravelLocal (an online platform for local tour operators) offers a seven night hiking tour in Svaneti from £1,160pp. The price includes accommodation, most meals a driver and a guide.

The writer travelled as a guest of TravelLocal