Two women saunter by, shading themselves with an exquisite lace parasol and swinging their reticules as they walk. Behind them, a man in a top hat, fitted jacket and britches settles a mewling baby into an unwieldy perambulator. Another gentleman, this one bedecked in a tricorn hat and tiny, wire-rimmed glasses, cracks a joke – the ladies gathered around him titter behind gloved hands, their bonnet ribbons fluttering prettily in the breeze.

If it sounds as though I’ve wandered onto the set of the BBC’s next big-budget literary adaptation, the reality is even stranger. This is the annual Jane Austen Festival, and it is as spectacular as it is surreal. 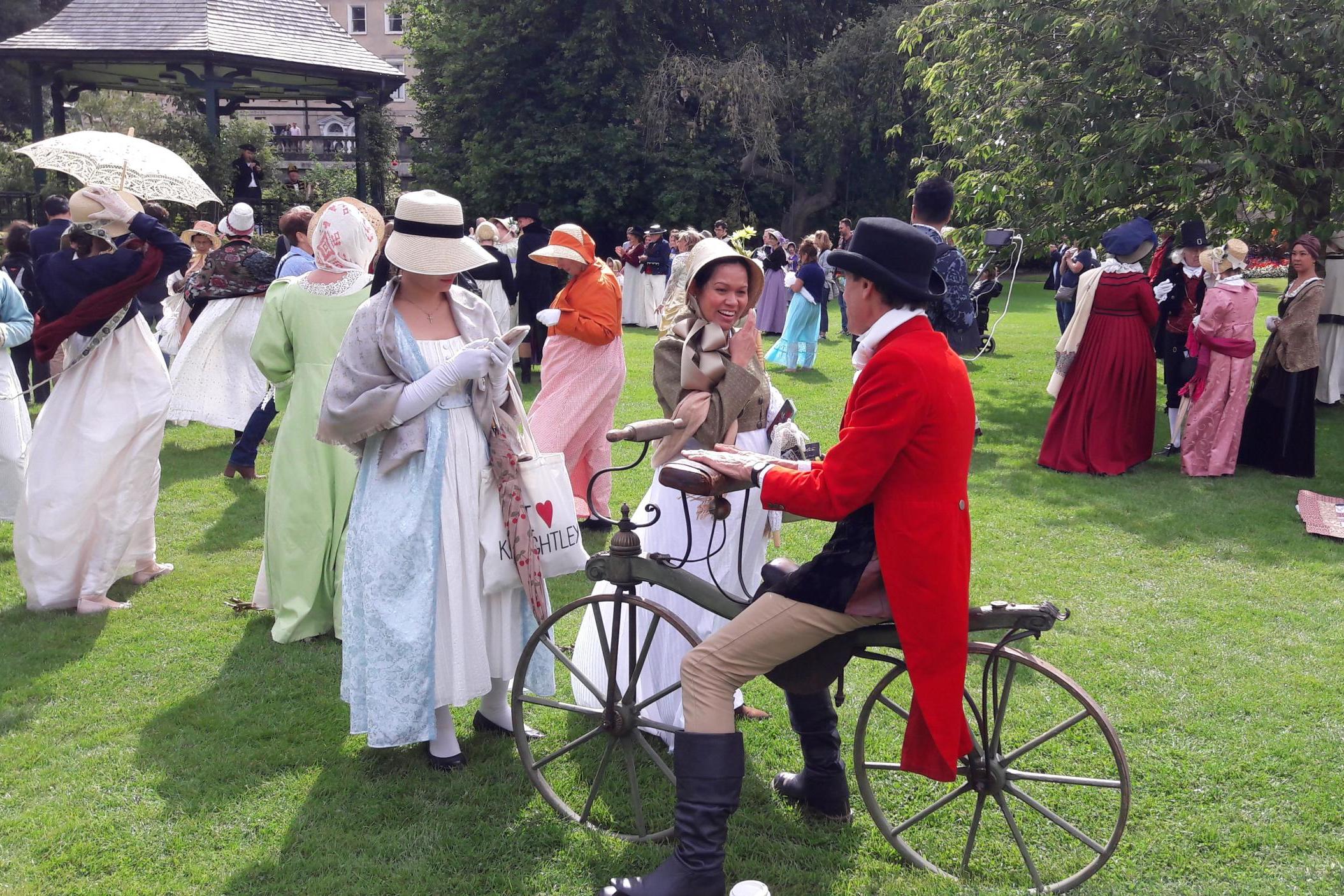 Each year, hundreds of Janeites (the official moniker for Jane Austen fans, I am reliably informed) flock to Bath from all over the world to attend balls, talks, breakfasts and plays – essentially living out their very own period drama, clad head-to-toe in full Regency dress for the 10-day duration.

And when I say all over the world, I mean it.

“We’ve come from Nova Scotia,” Darcy Johns, a member of the Halifax chapter of the Jane Austen Society of North America (JASNA), tells me with pride. She and her friends have rented out a Regency apartment for the whole week to enjoy the experience as much as possible. “We are huge Janeites!” she adds enthusiastically.

Darcy et al are milling about and admiring one another’s handsome garb in the Parade Gardens, having just participated in one of the signature events of the festival – the Grand Promenade. Starting at the sumptuously photogenic Royal Crescent, where a gently curved row of Georgian townhouses glowed a warm butter-yellow in the morning sun, over 200 of us processed slowly through Bath city centre in full regalia. It was the closest I am ever likely to get to being famous: people arrived in their multitudes to watch us and all along the route I was waved and smiled at, papped, asked deferentially over and over, “Could we get a picture with you?”

But of course! I was in a benevolent mood and decided to indulge my public.

Having a good rubberneck at the range of bachelors on offer, my sister and I concluded that they all appeared infinitely more eligible when dressed in Georgian finery. And we’re not the only ones to think so. “At first I felt very uncomfortable in it,” says John, a festival-goer dressed as an 18th-century Oxford don, of his attire. “Then I noticed it was very attractive to the ladies, and I had quite a good time.” 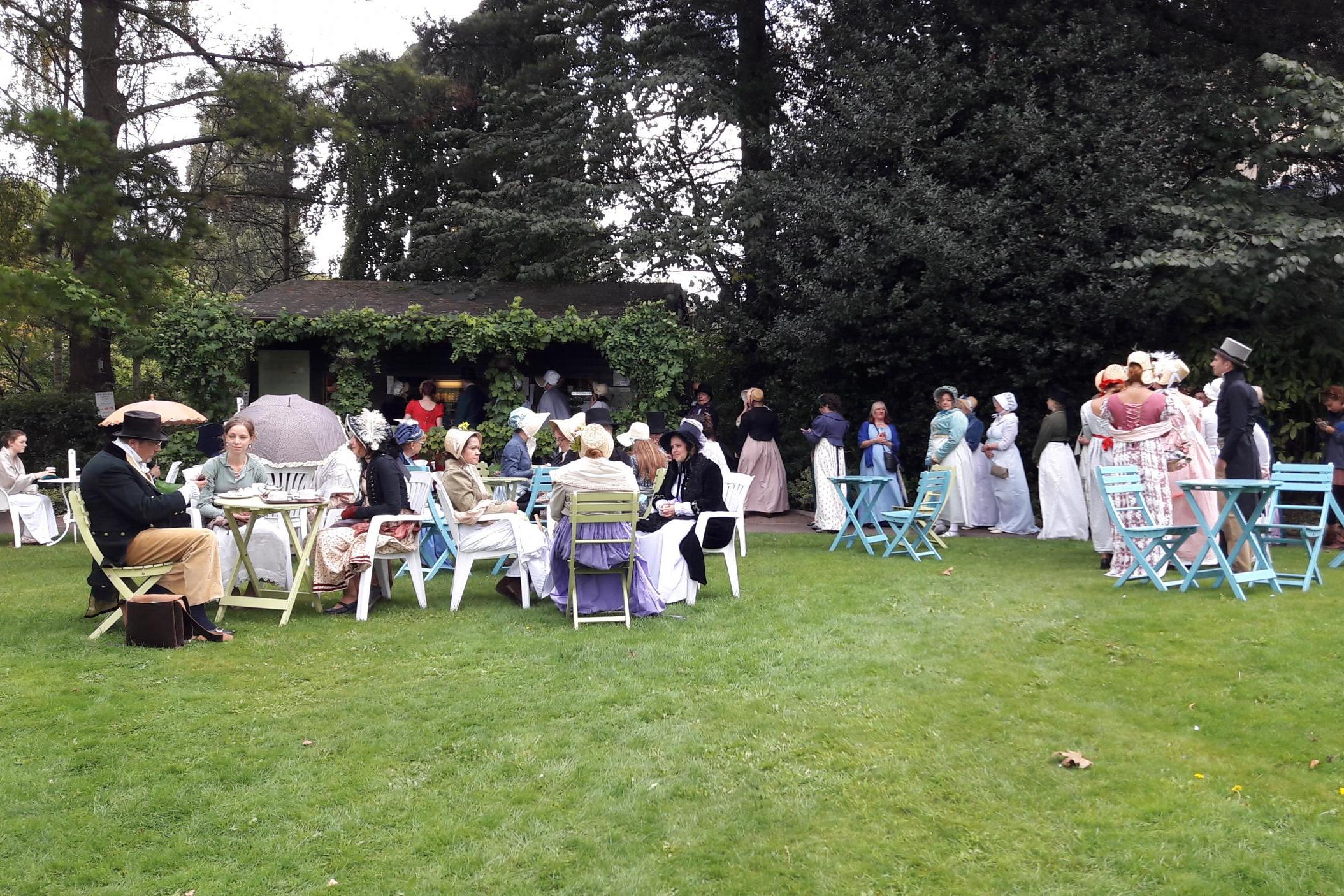 The crowd on the green eventually disperses, with some staying to enjoy a traditional Georgian picnic while others head off for a cream tea at the Pump Room. We plump for the Festival Fayre in the Guildhall, where stalls sell everything from ball gowns to be-feathered turbans, and entertainments include having a paper silhouette cut in your likeness and getting your tarot cards read.

As we spend the day exploring Bath, I get a frisson of excitement every time I catch a glimpse of a straw bonnet bobbing along the street or a white-gloved hand pushing open a shop door – it’s like being a member of a secret, exclusive club. My fellow festival-goers and I exchange shy smiles as we pass (if they’re British) or have a full-on chat (if they’re American). There’s something about wearing a costume that means the normal social barriers are broken down; it’s as if we finally have permission to speak to strangers without embarrassment or reproach.

This liberating feeling continues into the evening, when we venture forth in our best frocks to enjoy dinner and dancing. Only we’re doing it 1700s-style – dinner is at Sally Lunn’s, Bath’s oldest house, where we’re served steaming trenchers (a hearty bread plate steeped in stew), while boogying is at the bicentenary country dance. 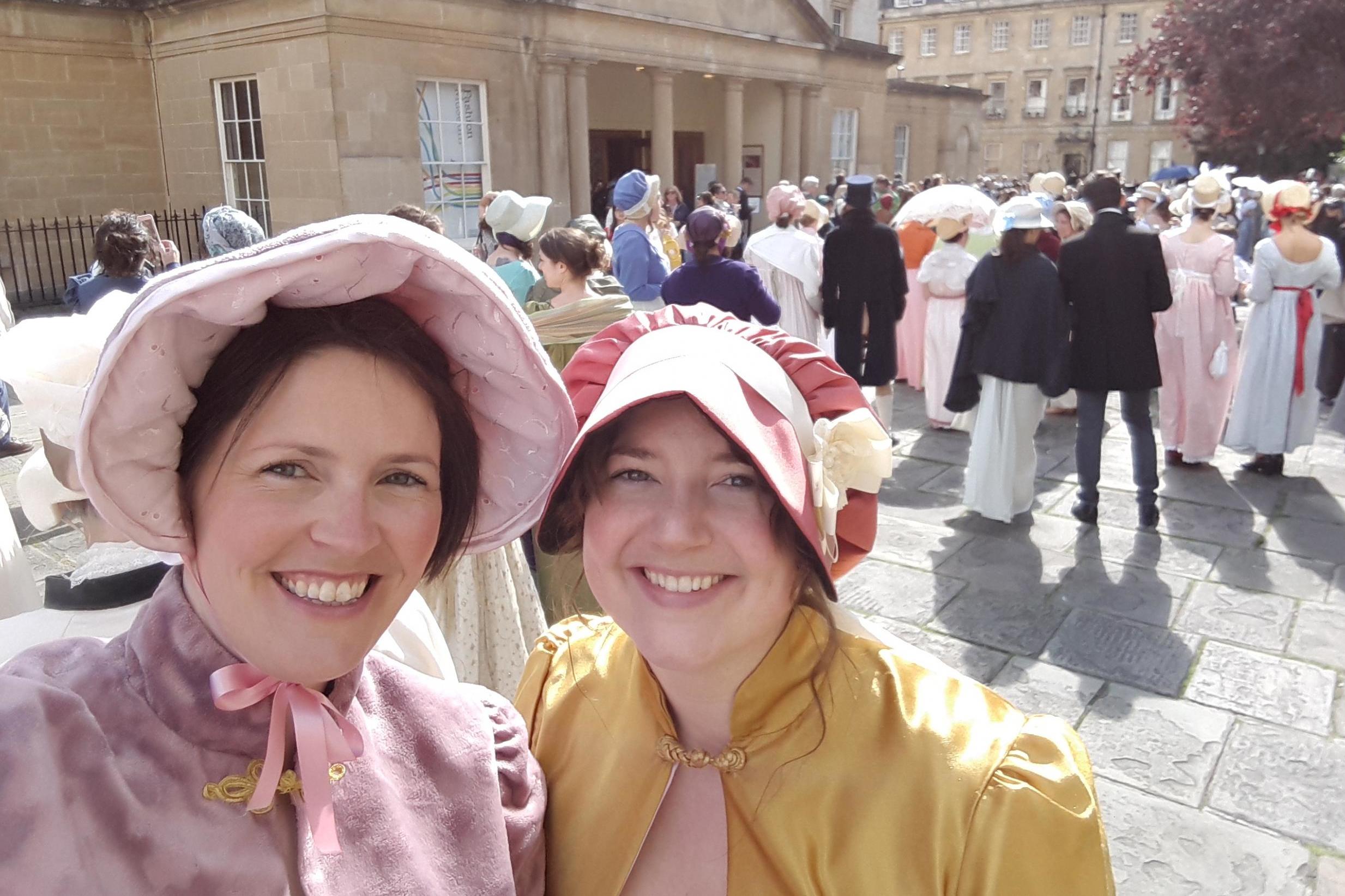 If you know your Pride and Prejudice, the dance is more akin to the humble affair at the Meryton Assembly (when Mr Darcy snubs poor Lizzie) than the decadent ball at Netherfield. And, perhaps because of this, it’s all much more fun than I anticipated.

“It’s a good laugh,” a dapper chap called Jonathan says as we cool off from a vigorous dance named, rather amusingly, Gout Forever. “You get to enjoy yourself – you get to do something that you normally wouldn’t do.” He stresses that you don’t have to be a great mover to take part: “It’s the equivalent of your modern rave.” 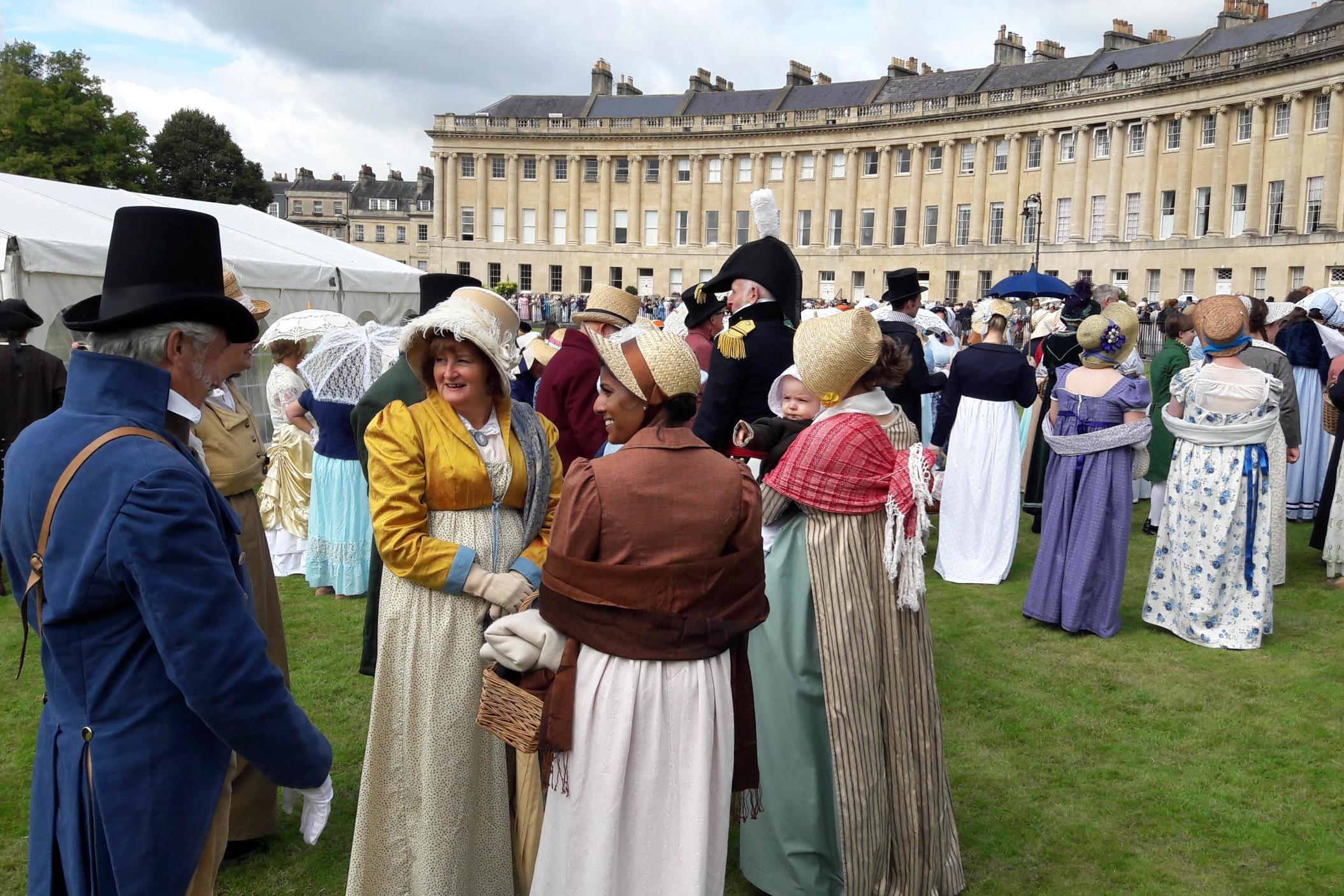 In between bouts of high-energy jigging we make plenty of new acquaintances, and I am surprised by the diversity of the Janeites who’ve found their spiritual home here. Sisters Rachel and Amy, both in their late twenties, share that this is their first time attending together. Joan, an older lady in a fabulous petrol-blue satin dress, frets that her homemade matching turban hasn’t come out right. “You look amazing!” we assure her; she blushes and accepts our compliments with good grace. A well-groomed gent in a pristine 18th-century clerical outfit takes pity on us and demonstrates how to chasse correctly.

The only anachronism in the room is the invasion of the mobile phone, the selfie opportunities being too tempting to ignore. But even this is heartening, proving that, at this festival, having a good time trumps nit-picking. There’s no judgement here, only warmth and acceptance.

It may be the Regency equivalent of a rave, but in the absence of acid-fuelled happy hardcore proceedings wind up at an astonishingly respectable hour. Come 10.45pm the musicians are packing away and the dance caller is bidding us goodnight to a round of genteel applause. 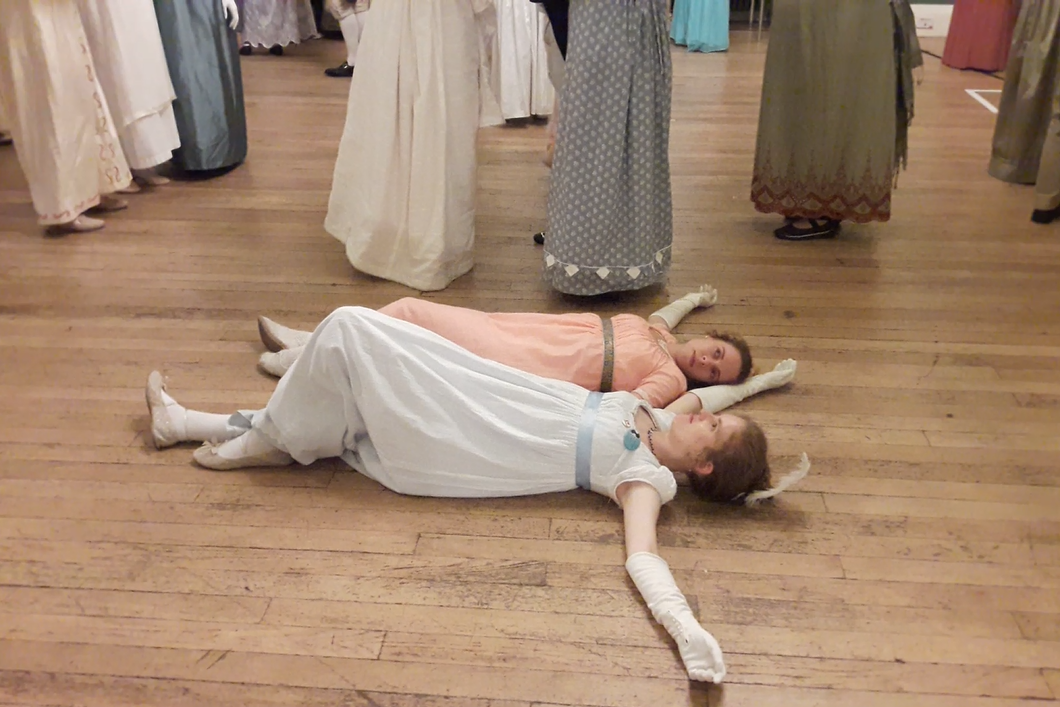 The next morning we rise early to try out Bath’s famous Thermae Spa. As we amble down the road, everything feels off kilter – why is no one smiling indulgently at us? Why aren’t people scrambling for a camera to take our picture? And then I remember: we’re in our civvies. I am a normal, 21st-century girl again, wearing nothing more remarkable than jeans and a jumper.

I may only have spent a day in Jane Austen’s world, but I miss it already. Could this be the beginning of my life as a Janeite? Let’s just say I wouldn’t take too much Persuasion.

The new Apex hotel (apexhotels.co.uk) is in prime position in the city centre, 200m from the Thermae Spa, and offers slick, contemporary style and a superior buffet breakfast. Doubles from £139, room only. Book Now