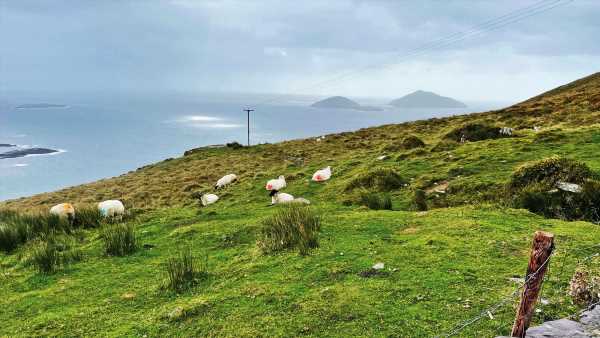 “Failte, lassie,” the immigration agent at Dublin Airport said as I arrived for my visit to Ireland.

Failte is the Gaelic word for “welcome,” and his friendly greeting set the tone for the next 10 days.

According to Ancestry.com as well as family stories, I’m 50% Irish on my dad’s side, with most of the Nagle heritage centered in County Cork. So I was visiting the Emerald Isle as millions have done before me to see the sights, soak in the history, sip some Guinness and trace my roots.

Ireland is a small country, comparable in size to Pennsylvania. From north to south, the drive is about seven and a half hours; east to west, it takes roughly two-plus hours. But that’s if the roads run straight, which they mostly do not. Usually they wind through green valleys past sheep and cow-filled pastures, twist up and down mountains, hug the coastline and narrow to one lane in many places, bordered by thick growths of ferns and grasses.

Traveling with my daughter and two childhood friends, we were happy to leave country driving to someone else, especially since it’s on the left side of the road and all signs are in Gaelic. 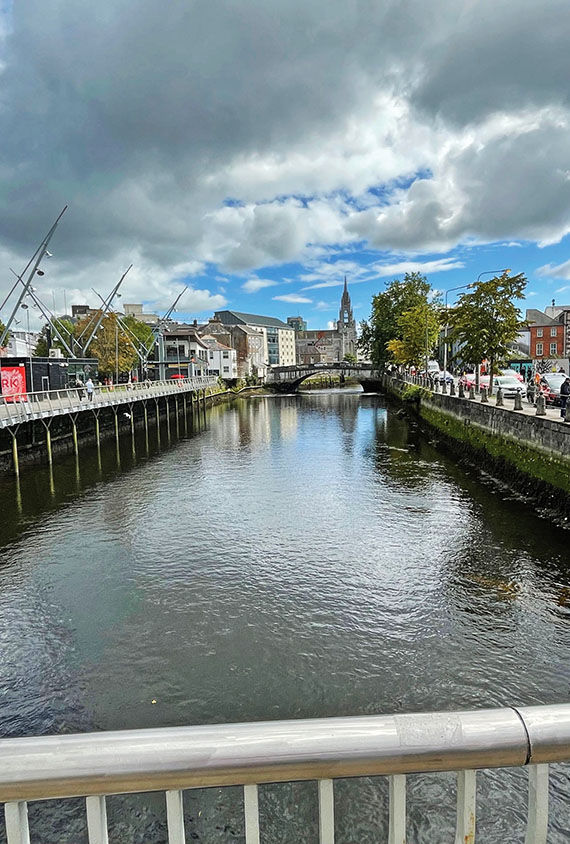 The first stop was Dublin, and to get our bearings, we each bought a $26 ticket good for 24 hours on one of the hop-on, hop-off buses that crisscross the city, covering 25 major sites, including the Liffey River and its 21 bridges, Gothic-style cathedrals, the 22-acre St. Stephen’s Green, Dublin Castle and Trinity College.

We used the same bus tickets the next day and hopped off at the seven-story Guinness Storehouse, the visitor’s center on the 50-acre Guinness campus in the city center. Since the Storehouse opened in 2000, it has welcomed more than 20 million visitors. The $26 entry fee gave us the full story on the history, heart and soul of brewing “the black stuff,” Ireland’s iconic beer. We topped it off with a pint at the Gravity Bar on the top floor with dramatic views of Dublin and the Wicklow Mountains in the distance.

The Dublin visit included a boisterous evening at Darkey Kelly’s Bar & Restaurant on Fishamble Street, with live music; a gregarious mix of tourists and locals; hearty pub grub like seafood chowder, Irish stew and fish ‘n’ chips but also gluten-free and vegan options; friendly, efficient staff; and a selection of dozens of local beers. Slainte! (Or “cheers,” as we Yanks might say.)

Our next destination was the largest and southernmost county of Ireland. Cork is known as the rebel county for its long history of challenging claims to authority.

The two-and-a-half-hour train ride from Dublin to the city of Cork, the island’s third-largest behind Dublin and Belfast, was well worth the $80 roundtrip ticket for the scenic views of green hills, stone castles, peat bogs and peeks at lace-curtain windows in slate-roofed homes.

Our first stop was the Nano Nagle Place on Douglas Street. It houses the history and pioneering work of Nano Nagle, who founded the religious order of the Sisters of the Presentation as well as a network of schools to educate the poor Catholic children of Cork city in the 18th century. The schools flourished and are now found all over the world.

She and I share the Nagle name. That in itself was all the proof I needed that my roots run deep in the Irish soil and spirit.

Next, we booked a daylong tour with a global organization called Tour by Locals. The price was $125 for each of us. Our guide, Liam, was a Corkonian and a history buff who brought the story of his beloved country alive for us. We traveled comfortably in his taxi, stopping often to see the sights and listen intently to his corresponding dialogue.

And yes, we climbed the 128 narrow, stone steps to the top of Blarney Castle, where I leaned backward, upside down (while a guide held my ankles) and kissed the spit-speckled Blarney Stone. “Kiss it and you’ll never again be lost for words,” Liam assured us. I’ll never do it again! 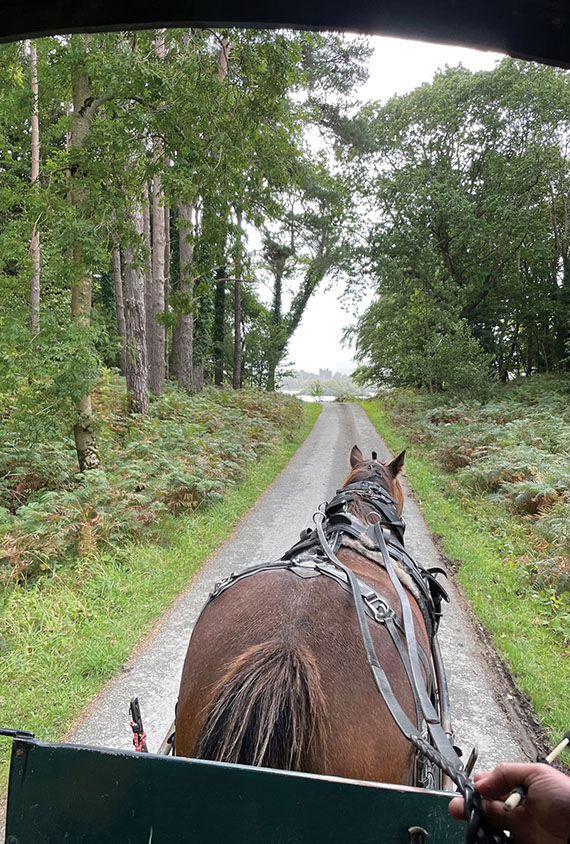 By horse and carriage (known as jaunting carts), we toured part of Killarney National Park, the largest national park in Ireland, and later wandered through the picturesque seaport town of Cobh (pronounced “cove”) on the south coast, home to Ireland’s only dedicated cruise port and the last port of call for the Titanic on her tragic transatlantic voyage in 1912.

Cobh was also the embarkation port for more than 2.5 million Irish emigrants fleeing famine and poverty between 1848 and 1950.

The last stop that day was the village of Clonakilty (the name means “stone castle of the woods”) on the windswept Irish coast, a place of tall spires, elegant squares and De Barra, a bar on Pearse Street with traditional and folk music.

We said a fond farewell (slan in Gaelic) to Liam and later chowed down at Si An in Cork city. Fion, our waiter, persuaded us to try the fish ‘n’ chips “because it’s the best in Ireland”; it was darn good. 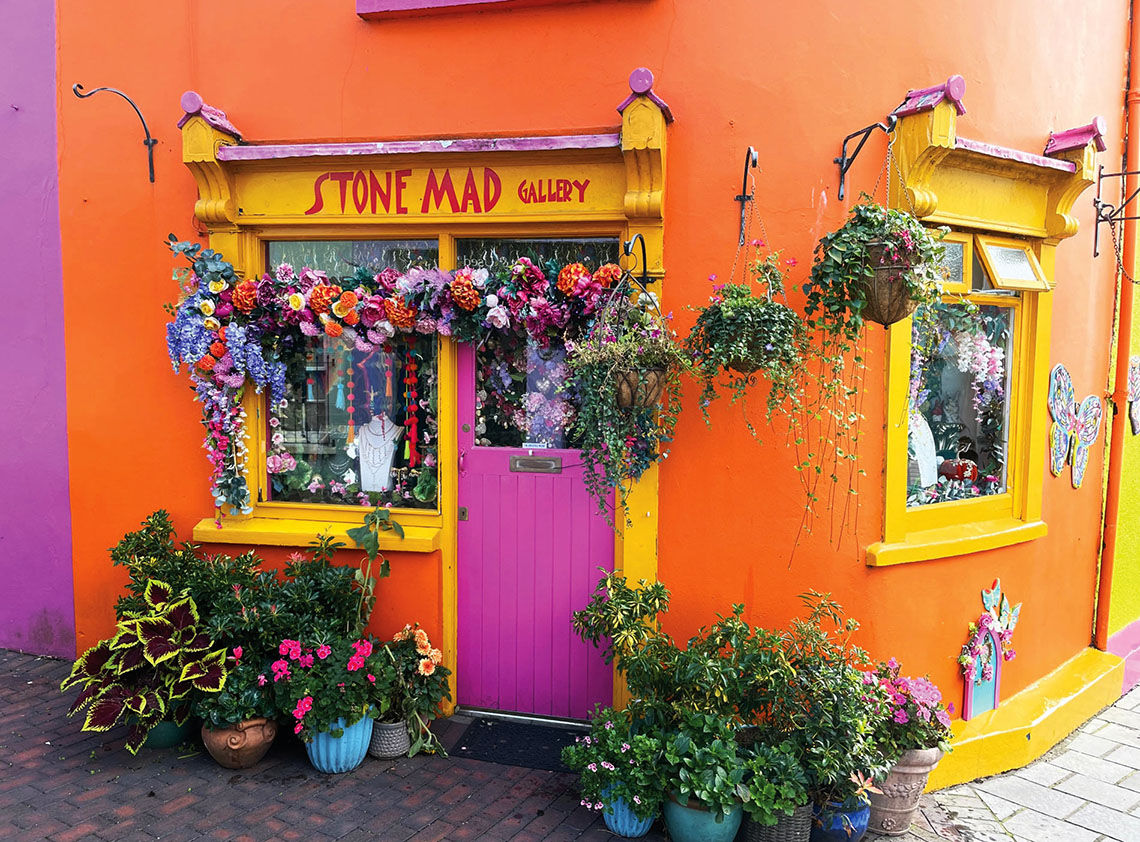 An hour bus ride south of Cork the next day took us to Kinsale, which we were sure had to be one of the prettiest small towns in Ireland — a thought that was later confirmed by Dermot Ryan, our guide on a walking tour.

“The Tidy Towns competition among Irish villages began in 1999 as an effort to brighten up the grey facades of so many of the shops and homes in the rural towns and villages in Ireland. Kinsale is always among the top 10 of prettiest villages in Ireland,” he said.

The vibrant colors on many of the homes and shops in Kinsale reminded me of villages I’ve visited in the Caribbean.

Our next full-day outing was a motorcoach tour booked in Cork with Paddywagon Tours of Ireland.

Aiden, our driver, was as knowledgeable a guide as Liam as he maneuvered the Ring of Kerry, a 100-mile, circular route on the Iveragh Peninsula, southwest of Cork, with views of the MacGillycuddy’s Reeks (mountains) in the distance as well as lakes, bays, market towns and villages like Waterville, Sneem and Templenoe.

The drive took us along the wild Atlantic coast where shorelines were a mass of stones and pebbles worn smooth over many years by many waves.

“History is alive in Ireland. It lives and breathes every day,” Aiden said on the journey back to Cork. He hit the play button on his CD player and the bus filled with traditional Irish music. A perfect day, a perfect trip.