Home » Destinations » Europe » What it’s like visiting Chernobyl, 32 years after the nuclear disaster

The Ukrainian winter bites like a wolf. But what I hear next chills me more. “I was 28 at the time of the explosion. I was young and wanted to save the world. I wanted to volunteer, but my wife said she’d divorce me if I went. Turns out, she saved my life,” says our guide, Serhii Uzlov. He’s speaking of Chernobyl – the worst nuclear disaster in history.

Thirty-two years ago, on 26 April 1986, the crew of reactor number four switched off the safety systems in the early hours of the morning to test the turbine. The reactor overheated, surged out of control and generated an explosion that put an estimated 400 times more radioactive material into the Earth’s atmosphere than the atomic bomb dropped on Hiroshima.

The blast blew off the concrete lid and sent a plume of radioactive material two kilometres up into the atmosphere. An 18-mile radius, known as the exclusion zone, was set up around the reactor.

Remarkably, it’s been open to tourists since 2010, but many are nervous of its silent menace. I joined a new tour to see for myself.

Our starting point is the Chernobyl Museum in Kiev, 75 miles south of the reactor. In the first room a silent black and white video, filmed in the nearby town of Pripyat hours after the event, plays on a small television screen.

The cameraman pans from filming the smoking nuclear plant, just over a mile away, to mothers strolling across the square with their babies in prams. “Notice the flashes on the screen?” asks Natalia Hrvatska, the museum guide. “That’s the radiation reacting with the film.”

I stare at the men smiling for the camera, oblivious to the danger all around them. “It took 36 hours before buses turned up to evacuate them. People were told to take only necessities because they could come back in three days,” she says. It would be a year before the first could return.

Nobody really has an accurate count of how many died, indirectly, as a result of the Chernobyl disaster. Mortality rates have been obscured by propaganda, and reports were lost when the Soviet Union broke up.

Around 600,000 ‘liquidators’ (first responders) were drafted in from across the republics to clean everything up. “Men sent onto the roofs of reactors one, two and three to shovel off the debris could only spend two minutes once in their life up there it was so contaminated,” says Natalia. 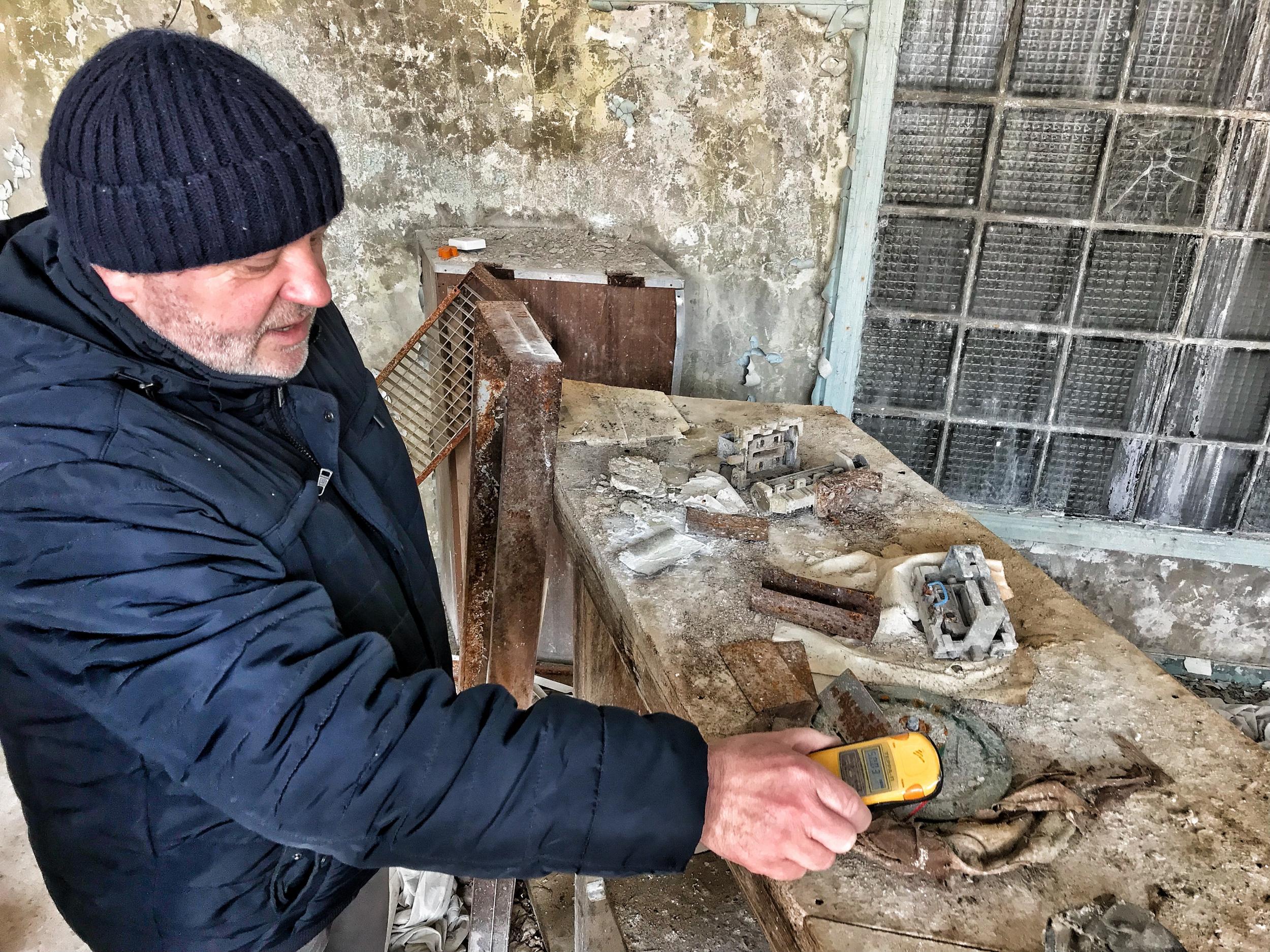 The next day we drive north to the exclusion zone’s 30km checkpoint. Serhii has entered the zone more than 200 times, he says, and his bald head and cheeks are reassuringly rosy. “I’m sorry to say it’s safe, I know you wanted adventure,” he teases.

For those thinking of visiting, be assured scientists from other countries have visited to corroborate Ukraine’s claim that it’s safe; the exposure is the same as a transatlantic flight. Although the form visitors have to sign is alarming: “I understand and fully realise staying in the area with high levels of ionizing radiation can cause potential harm to my life and health in the future.”

A wide avenue of tapered silver birch trees guide us towards the inner 10km checkpoint, where military men outfitted in camouflage and carrying automatic rifles come out to inspect us. “The exclusion zone is a state within a state – it has its own rules,” says Serhii. A solemn nod and we’re through.

As if matching our misgivings, the mercury slides to -17°C. The cold saps the energy from phone batteries like bad spirits (not that they’d be much use – there’s no reception here). As we pass abandoned homes, my pen freezes instantly, as if nature itself is forbidding me from sharing secrets of this place. 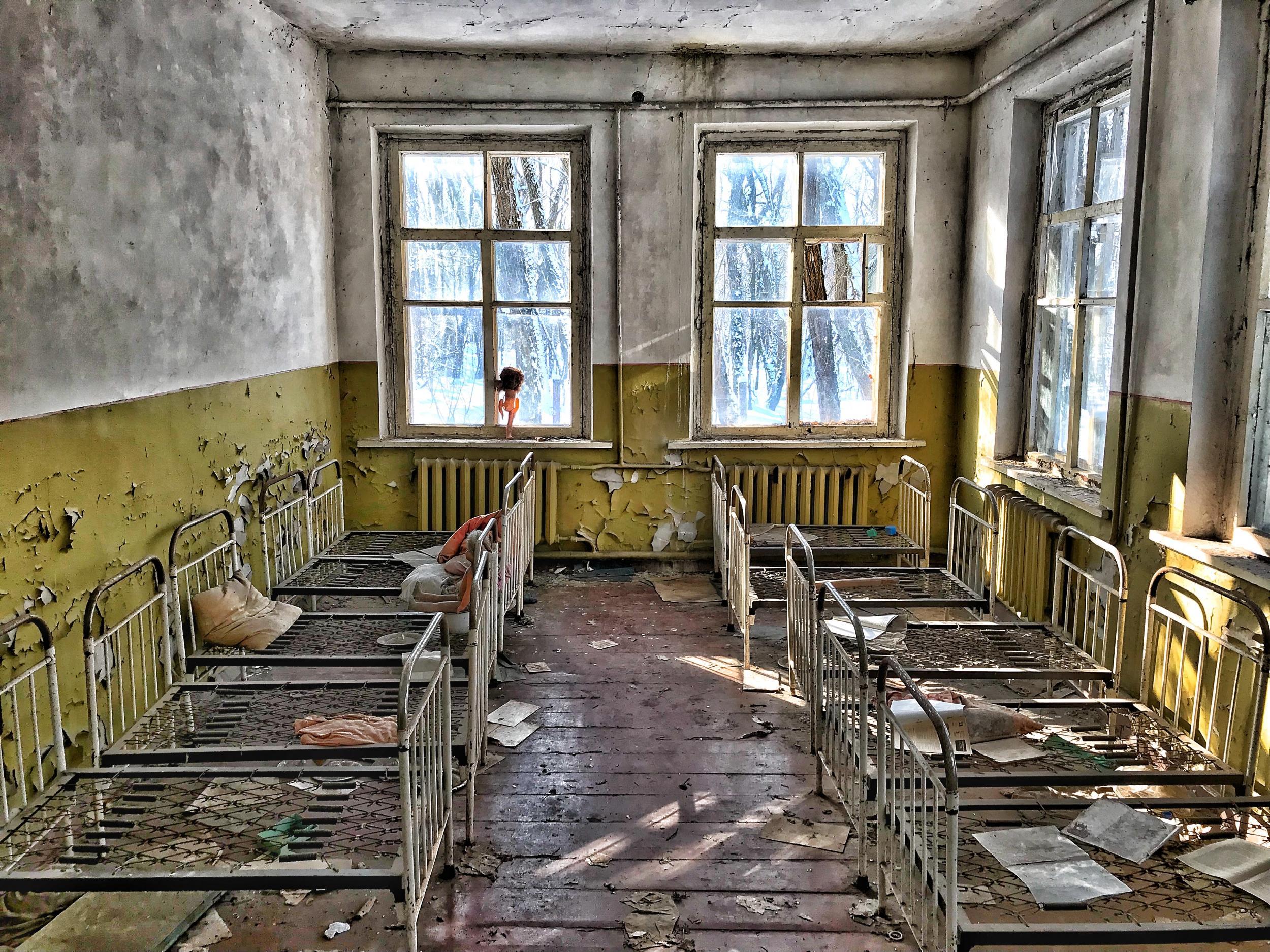 On the horizon is the domed roof of the reactor. It’s inside the ‘special zone’ that’s demarcated by a 10-foot concrete wall topped with an electric fence and barbed wire for good measure. No tourists are allowed inside this section.

“People still get ill working there,” says Serhii, as we pull up outside the observation deck where a hulking granite memorial stands to those who died. I’m shocked to learn around 4,000 people still work inside the zone cleaning debris.

“They usually work on a two weeks on, two weeks off rota, but inside the reactor it can be as little as an hour before they reach their daily limit,” explains Serhii. We don’t linger long. 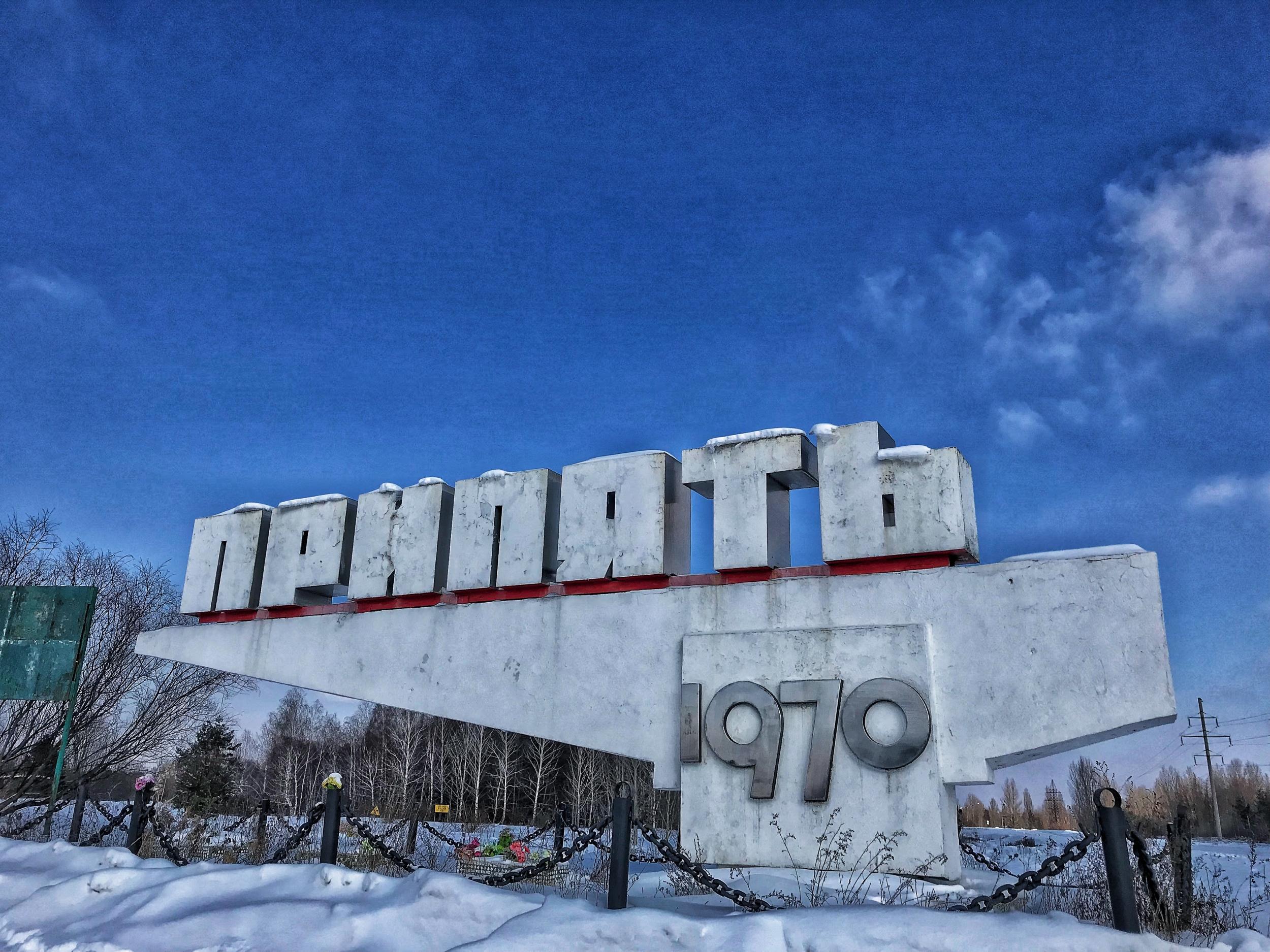 Around 160 villages fall within the exclusion zone, but Pripyat, just over a mile from the nuclear plant, is the best known. After the catastrophe the whole town was encircled with barbed wire until 2000.

Serhii takes us on a walk past the Palace of Culture (a mammoth community centre with a boxing ring, theatre and gym), the school (which now features in the video game Call of Duty), through the football stadium, its field peopled with nothing but poplar trees, and to the fairground that never welcomed a single child because it was scheduled to open just a week after the disaster. The yellow cabins of the Ferris wheel hang limp in the freezing air.

“Follow me, I have something to show you,” he says, weaving through the trees towards the hospital. “The basement here is one of the most contaminated places in town. The first casualties [firemen] were brought here for treatment; their stripped clothes discarded.”

“Readings reached 7,000 millisieverts,” he continues gravely (that’s the equivalent of 1,000 chest CT scans; haemorrhage starts at 1,000 millisieverts, and 4,000 can cause death within two months if untreated). 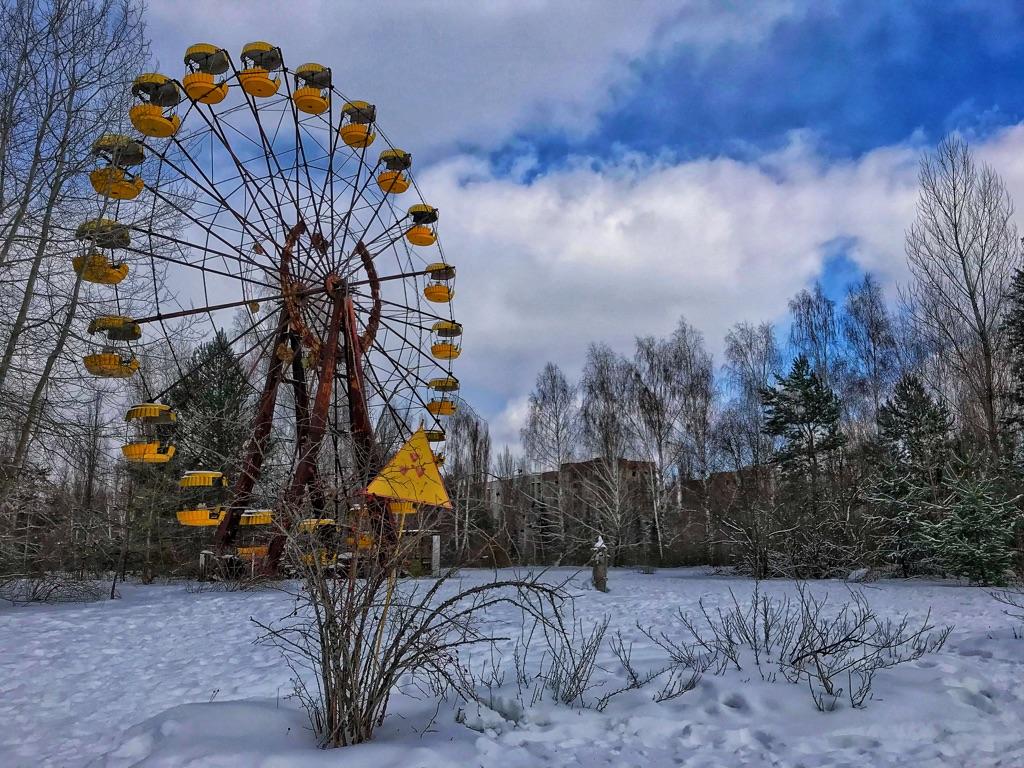 We step through a broken window, our boots crunching on the shattered glass, and he points the Geiger counter at an old rag lying on the side. Immediately, it starts to emit a shrill alarm: 5.5 millisieverts. The highest reading we’ve encountered here.

“This is one of the skullcaps that belonged to one of the fire fighters,” says Serhii, as I instinctively take a step away. It’s easy to become complacent.

And yet – thanks to years of minimal human impact – there have been suggestions the zone has a bright future as a nature reserve, with wolves, beavers and the endangered Przewalski’s horse all flourishing here. 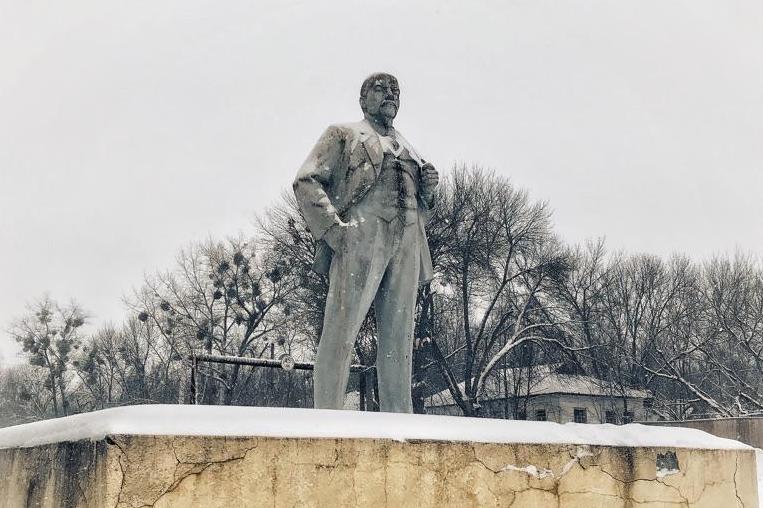 Before we can leave the zone we have to be screened for radiation. We’re escorted into a bland room with a hulking metal box. I’m instructed to step inside and place my hands and feet on sensors.

If the warning light flashes red, I might have to abandon my clothes; if it’s yellow, I’m safe. I wait, nervously for the verdict. Click. Yellow. The wave of relief I experience takes me by surprise. Back on the bus, I sneak a swig of celebratory vodka.

Explore has a four-night discover Chernobyl trip with three nights in Kiev and one inside the exclusion zone, from £829pp including flights, some meals, a tour leader and an official guide.

High season runs June to September, but winter is often better because the snow covers the soil, lowering radiation, and the trees are bare so you can see the structures.

The writer travelled as a guest of Explore

Exciting new festival for the home of Halloween ·