Home » Destinations » Europe » Why you should swap Santorini for Ios, the chic Greek island that’s on the up

It’s early evening on the Greek isle of Ios. From the barren hilltop above Chora (Ios Town), I’m watching the sun sink towards the horizon. Everything below me, from the roofs of the town’s whitewashed houses to the Aegean Sea beyond, is bathed in glorious, golden light. It’s a scene that’s made all the more magical for knowing that I’d be watching this same spectacle through a forest of selfie-sticks were I on neighbouring Santorini, where huge crowds vie for the most Instagrammable shot. In contrast, I’m one of just two dozen people who’ve hiked to this elevated spot for an eminently more low-key, personal experience. I know which version of sunset I prefer.

While Ios lacks the jet-set buzz of its sister Cyclades, being sandwiched between Santorini and Mykonos has definite advantages. With no airport of its own, the island benefits from easy access via its better-known neighbours without being similarly swamped by summertime hordes. And although Ios Town is just as lovely as Santorini’s famed cliff-top villages, its jumble of churches, shrines and sky-blue painted doorways feels considerably more lived-in and authentic.

But while it’s long been happy to let its high-profile siblings hog the limelight, the past few years have seen Ios upping its game. Though its typical formula of lazy days and late-night partying remains unchanged, recent developments in the shape of glitzy beach clubs, chic hotels and cool new restaurants are drawing a more sophisticated crowd to discover this island idyll.

Hideout Suites, my holiday home from home, is a case in point. I’m staying in one of 12 avant-garde villas (eight of which are new for 2018) carved into a hillside five minutes by bus from Ios Town. They’re owned by the Mikoniatis family, who effectively put Ios on the map 30 years ago by opening a party venue and campsite at the far end of Mylopotas Beach. From these humble beginnings grew today’s phenomenally successful Far Out Village, which combines a 3,000-capacity mega-club with budget digs for a youthful clientele.

Hideout Suites are the culmination of Far Out’s gradual evolution. Built from local stone and whitewashed plaster, with flagstone floors and exposed wooden beams, they beautifully blend island architecture with contemporary Scandi style. My one-bedroom unit is minimal and chic, with a sun-soaked terrace and glass-fronted infinity pool overlooking Mylopotas Beach’s kilometre-long golden sweep. Up here I feel a world away from the holidaymakers and party people, yet it’s only a 10-minute stroll down to the shore.

This puts the suites within easy reach of another newcomer, Free Beach Bar, which opened just last year on Mylopotas. Its palm-thatched cabanas are an upgrade from the standard sun-lounger options found elsewhere along the strand and come with king-size beach beds, cocktail menus and laid-back, summery tunes. It’s upbeat, relaxed and perfectly complements the peace and quiet of my villa. 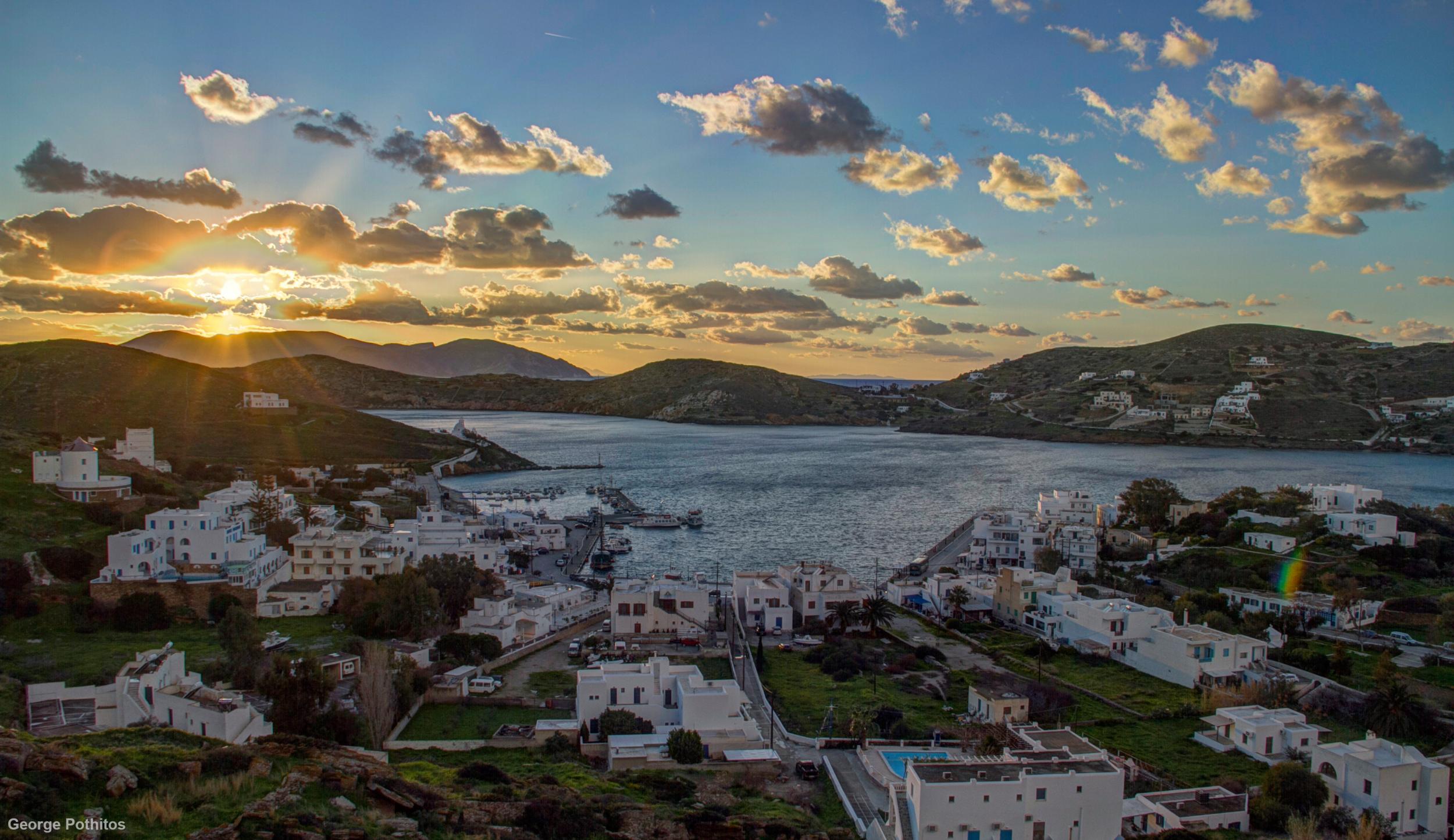 Mylopotas Beach itself is lovely – all sugary sand and limpid sea – but while it may be the largest, others claim to be prettier.

To check out the competition, I prise myself from my lounger and take a private speedboat tour down the coast with Mylopotas Water Sports. We cruise past sun-bleached cliffs and an empty, unspoiled hinterland, which make the sea’s blue shades appear all the brighter. 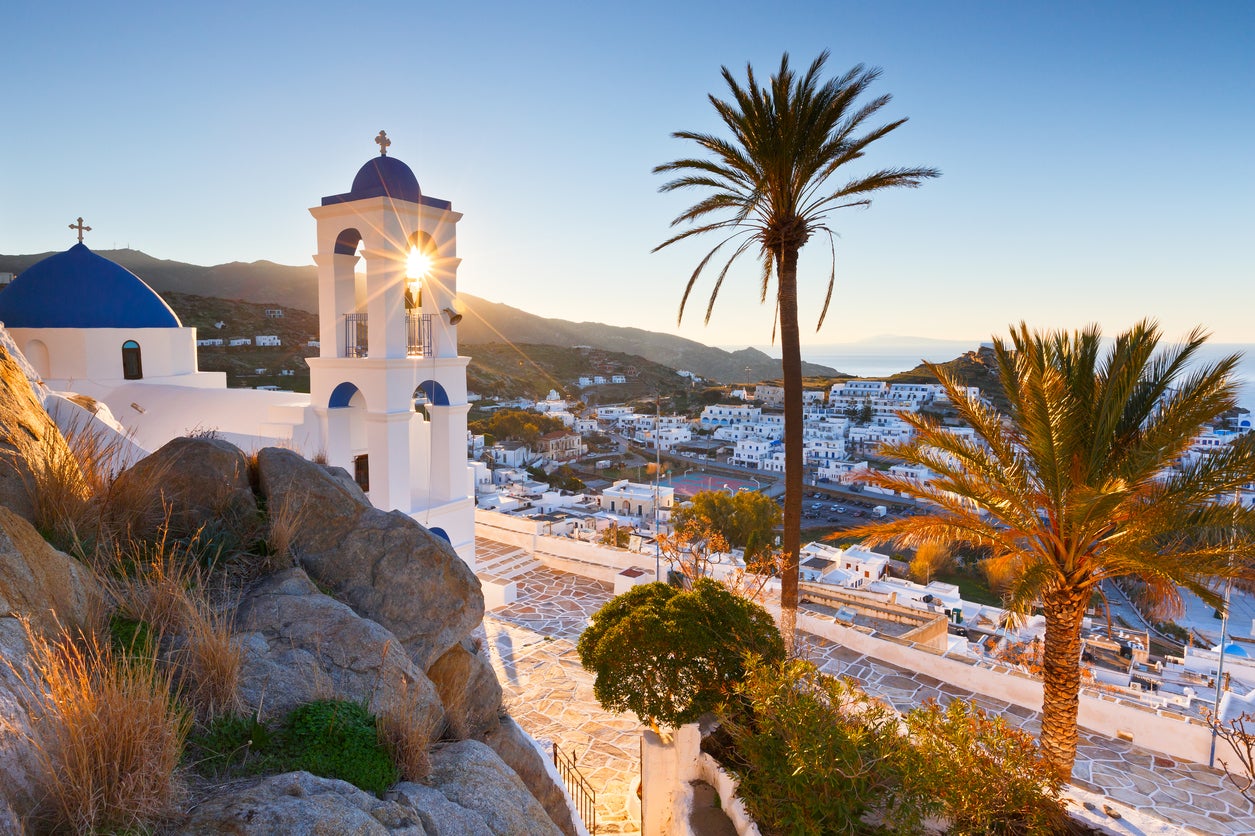 Tucked among folds in these cliffs lies a series of wild and deserted natural beaches, each one more gorgeous than the last. On Tripiti, I find crystal pebbles scattered on the sand, while Pepper Beach bears the tell-tale tracks of a turtle coming ashore to nest. We pause at each and take a dip in waters of extraordinary clarity whose colours run a dazzling spectrum from cobalt to kingfisher.

It’s incredible to discover such empty spots so close to crowded Santorini and Mykonos; but Ios’s upmarket makeover extends even here. Having acquired a huge chunk of the island, including this beach-studded coastline, entrepreneur Angelos Michalopoulos and his wife Vasso are preserving swathes of countryside while pumping millions into a scattering of high-end, low-density developments under their Luxurios brand.

I meet up with them later at Pathos Sunset Lounge, another of their projects, to sip sunset mojitos and chat about their vision. As they tell me about Calilo, their luxury spa hotel opening this summer, revellers dance beneath a sky turning various shades of vermilion. I tell Vasso that the scene looks more like something from Mykonos, and she smiles. “Ios is truly spectacular in its simplicity,” she muses, “but we like to think we’re helping to deliver the future this island deserves.”

British Airways flies to Santorini and Mykonos from London City and Heathrow airports, from £206 return. Ferries from Santorini take under an hour and cost around €32pp (£29).

Santa Monica Set to Pop Up at Pier One Sydney Harbour ·