ANA HOLDINGS INC. (hereinafter “ANA HD”) is working to enhance innovation in unmanned aerial vehicle technology as well as find new applications for drones. Building on its commitment to exploring future-oriented technology, ANA HD will be testing drones to improve medical care in Zambia and also to create an inter-island transportation network in Goto City, Japan.

In keeping with the company’s global reach and aspirations, ANA HD is working in collaboration with Aerosense Inc. and the National Center for Global Health and Medicine, to providing help for drone development in Zambia, particularly in the medical field. As part of its agreement with other innovators, ANA HD will offer its aviation expertise and technology to partners in Zambia as part of a comprehensive effort to build a sustainable drone transportation network for blood samples. Rapid blood testing in rural areas is viewed as key in the fight against the spread of HIV/AIDS, tuberculosis and other devastating diseases. As part of the agreement with the Zambian government, ANA HD has committed to using its drones in the country starting in January 2020 through June 2021.

ANA HD will also be building drone infrastructure in Goto City, Japan as part of its partnership with the local government as well as Autonomous Control Systems Laboratories, Inc. (ACSL), NTT DOCOMO, Inc. and PRODUCTION NAP. (NAP). ANA HD will partner with these leading innovators to establish a logistics network that uses drones to improve delivery between the remote islands of Goto City. The trial began today and will continue through Oct. 4, 2019.

Located in Nagasaki prefecture, Goto City consists of 63 islands, of which only 11 are inhabited. Because of the distance between islands and the region’s low population density, drones present the most viable means of connecting the islands which each other and the rest of Japan. The program offers substantial benefits for local residents, regional retailers and medical service providers. ANA HD’s participation in the  Goto City Unmanned Logistics Council will simplify delivery to and from the islands as well as offer training for those in charge of drone logistics so that residents are able to make the most out of new drone infrastructure. The drone campaign is part of Japan’s Drone i-Land Project, which half of its budget is funded by the Cabinet Office’s Regional Revitalization Promotion Grants.

“Technology is advancing at a rapid pace and we are always looking for opportunities to harness the latest breakthroughs in any way that we can as we work to improve quality of life around the globe,” said Yoshiaki Tsuda, Vice President of ANA Digital Design Lab. “ANA HD has built a reputation for leadership in the rapidly developing drone field and we are constantly searching for opportunities to find practical applications for this exciting technology. ANA HD has always believed in pushing technological boundaries through innovation and it is encouraging to see laboratory breakthroughs result in real world benefits.”

Both of these projects reflect ANA HD’s continued dedication to global development, passion for increasing connectivity and its desire to give back to the communities. By providing high-tech equipment and advanced training, ANA HD aims to help create better living conditions for underserviced areas worldwide.

Following the “Inspiration of Japan” high quality of service, ANA has been awarded the respected 5-Star rating every year since 2013 from SKYTRAX. ANA is the only Japanese airline to win this prestigious designation seven years in a row. Additionally, ANA has been recognized by Air Transport World as “Airline of the Year” three times in the past 10 years – 2007, 2013 and 2018, becoming one of the few airlines winning this prestigious award for multiple times.

ANA was founded in 1952 with two helicopters and has become the largest airline in Japan, as well as one of the most significant airlines in Asia, operating 82 international routes and 124 domestic routes. ANA offers a unique dual hub model which enables passengers to travel to Tokyo and connect through the two airports in the metropolitan Tokyo, NARITA and HANEDA, to various destinations throughout Japan, and also offers same day connections between various North American, Asian and Chinese cities.

ANA has been a member of Star Alliance since 1999 and has joint venture partnerships with United Airlines, Lufthansa German Airlines, Swiss International Airlines and Austrian Airlines.

Besides the full service and award winner carrier ANA, the ANA Group has two LCCs as consolidated subsidiaries, Vanilla Air Inc. and Peach Aviation Limited. The ANA Group carried 53.8 million passengers in FY2017, has approximately 39,000 employees and a fleet of 268 aircraft. ANA is a proud launch customer and the biggest operator of the Boeing 787 Dreamliner.

For more information, please refer to the following link. https://www.ana.co.jp/group/en/

STUBA Growth and flavours of the Mediterranean · 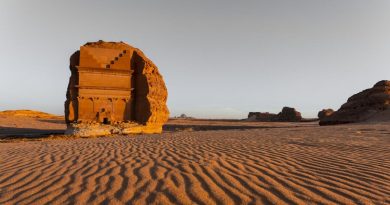 How Saudi Arabia is aiming to make AlUla a tourism hotspot

H10 Deserves Accolades for its Newest Property in Lisbon ·