The desert landscape of the United Arab Emirates doesn’t sound like the perfect venue for a cycling holiday – especially when you have the famed mountains of France and Italy, plus the varied terrain of mainland Spain, Mallorca and the Canaries as rival two-wheeled playgrounds much closer to home.

However, with just a few more hours in the air (Tenerife is four and a half hours from the UK, while Dubai is only seven), you’ll find a veritable cyclist’s playground of empty roads, purpose-built tracks and even mountainous tarmac.

I’m no stranger to long-haul cycling trips, and have ridden a veritable bucket list’s worth of the world’s greatest roads, but Dubai and its environs confounded even my expectations.

The holiday industry is cottoning on to the attraction of cycling in the year-round heat of the UAE, with Jumeirah hotels launching their first luxury cycling package holidays this year, which incorporate five-star accommodation with rides on the best roads the region has to offer. They’ll even help you organise bike hire, if you don’t fancy schlepping yours halfway around the world.

Want to get ahead of the curve? Here are seven reasons why you need to make Dubai your next stop for a two-wheeled holiday. 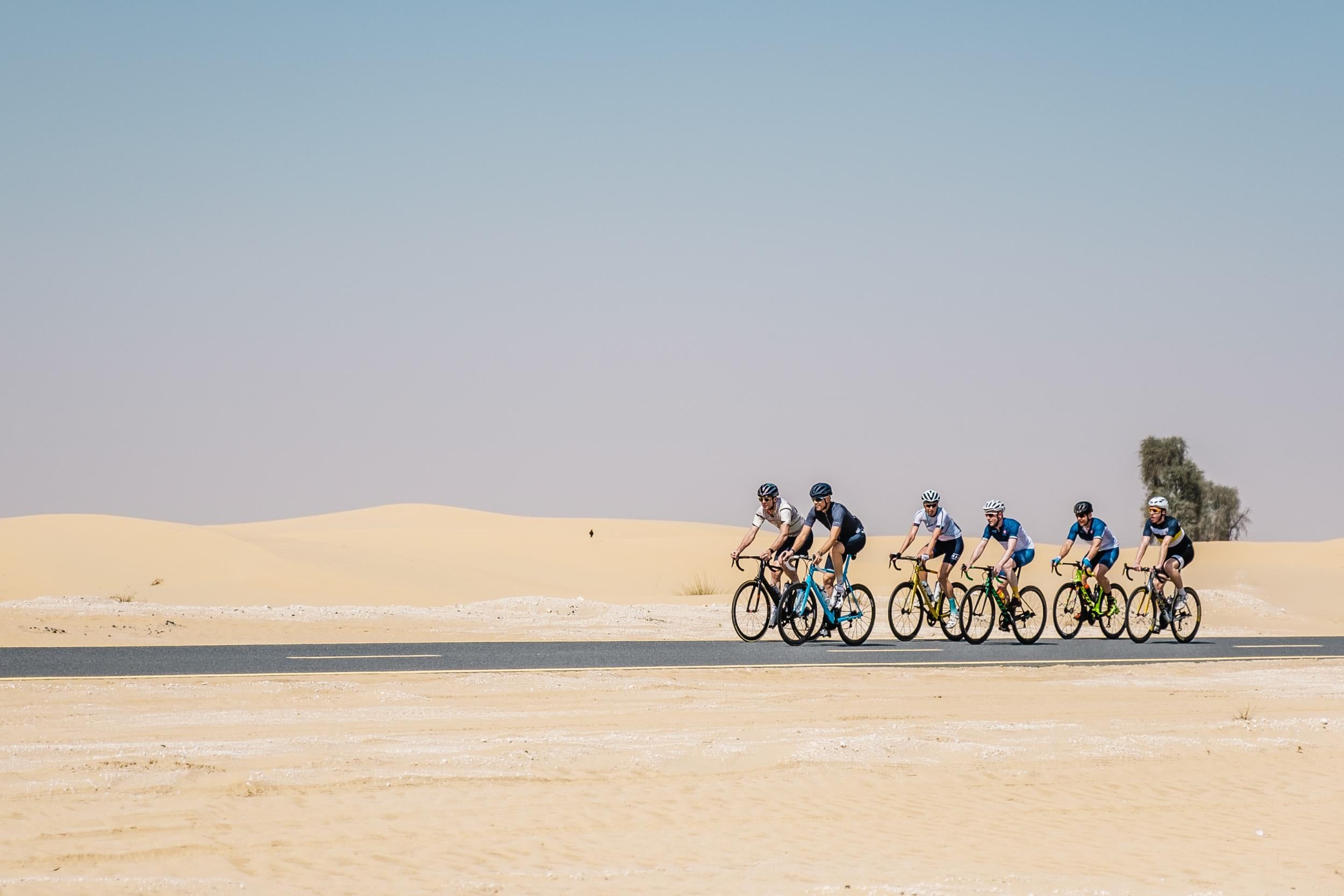 Visit Dubai in springtime and you’ll find average temperatures in the mid-20s. Opt for an autumn visit and the heat will rise above 30 degrees on some days. It’s a far cry from the slippery roads and dank atmosphere of the UK – plus cyclists love bronzed legs, of course, and the UAE will give you plenty of tanning time on the bike. Just make sure you take an extra bottle with you on rides, as the need to stay hydrated becomes crucial.

A short drive from downtown Dubai is the Al Qudra cycle track – a 50-mile network of traffic-free, bike-only tarmac criss-crossing the desert. Its central hub includes a bike shop, toilets and shower facilities, and at weekends it’s heaving with cyclists. Expect to experience the UAE’s famed crosswinds and desert heat, and on a weekday don’t be surprised if the only other living creature you see is an oryx sprinting alongside you. 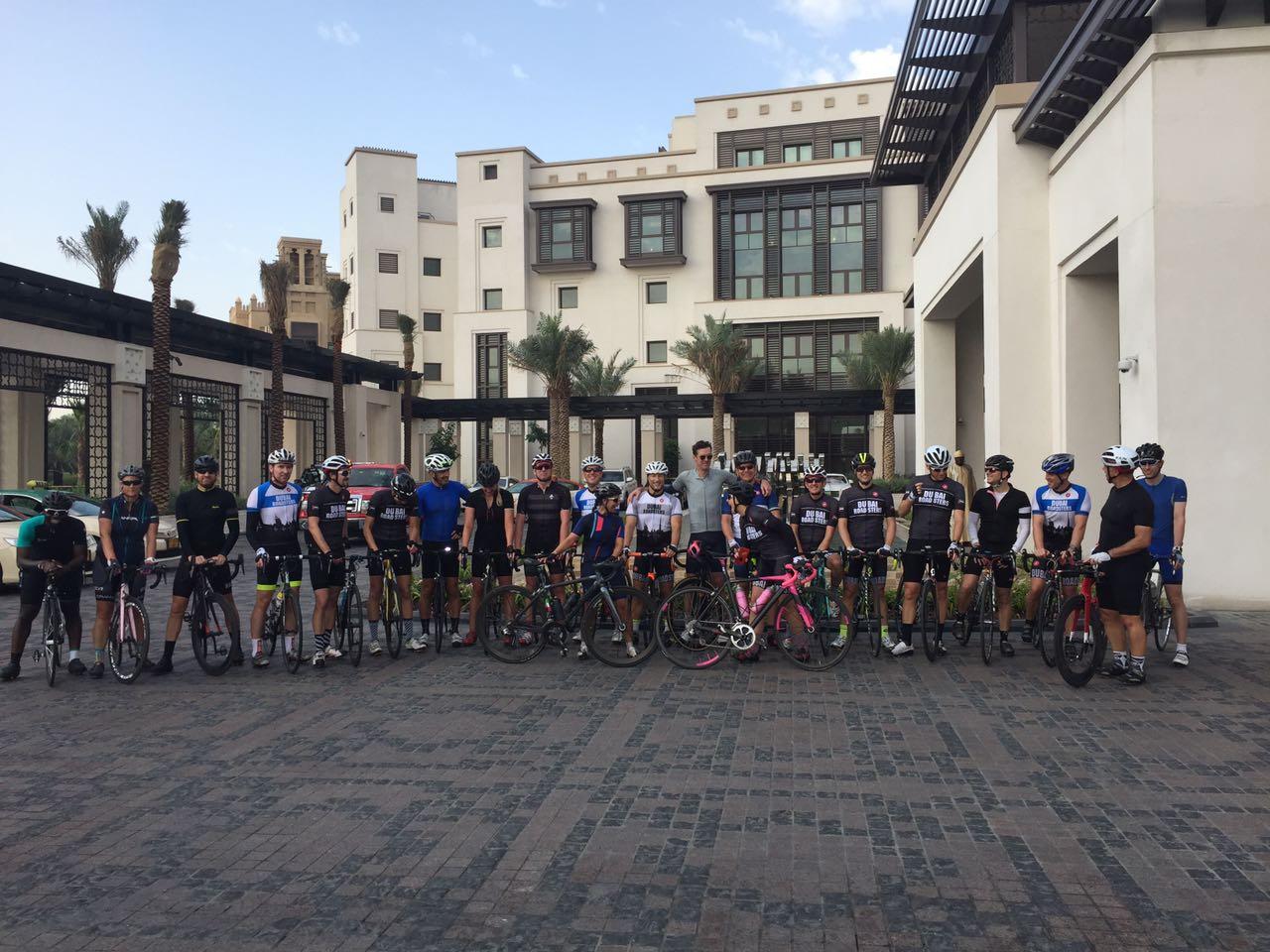 Dubai’s cycling scene is on the rise, and at its heart is Wolfi’s bike shop. Owned by cordial Black Forest expat Wolfgang Hohmann, it’s a one-stop shop for kit, equipment and servicing. Attached to the shop is the Dubai Roadsters cycling club. Join the club on Facebook, and hook up with its welcoming riders for a 5.30am Friday group ride through the deserted city streets. Friday is the first day of the weekend on the Arabian peninsular, so you’ll have the roads to yourselves.

Make any of Dubai’s beachfront hotels your base and you’re in for a relaxing afternoon on golden sands for a perfect recovery routine. If you’re riding on a Friday morning, take full advantage of the city’s most varied institution – the infamous Dubai brunch. Varying from lingering meals in secluded spots to full-on party central at 2pm, it’s an eye-opening experience no matter which way you cut it. Plus, if you’ve been for a big ride, you can afford to indulge yourself a little… 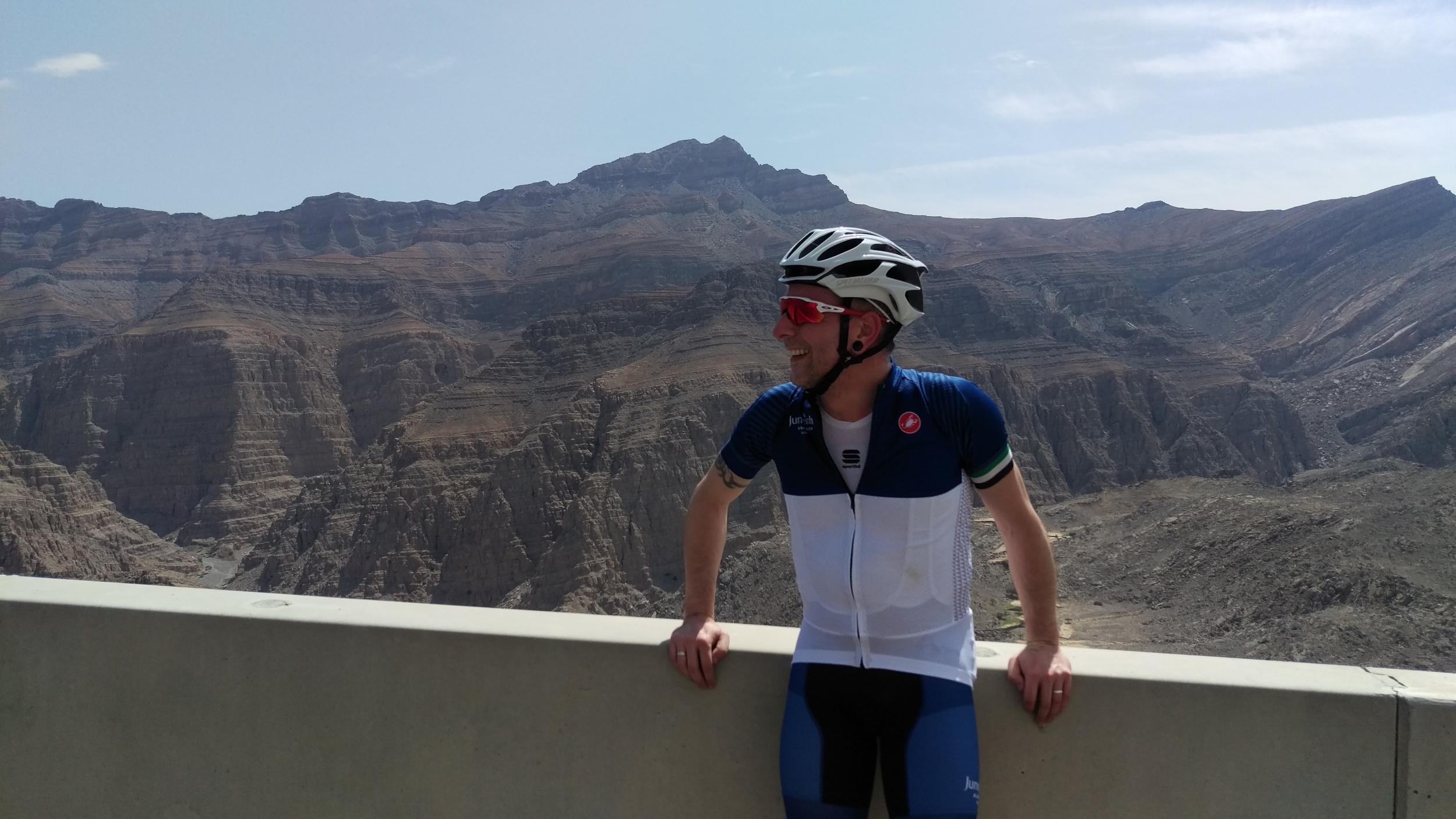 It’s not all desert

The UAE isn’t pan-flat, even if some regions do resemble the set of Star Wars. Two hours north of Dubai is the country’s highest peak – Jebel Jais. A constant 22-mile climb on perfectly-surfaced roads to a snack bar and with stunning views the whole way up, it’s a hidden gem of a ride. There’s no need to layer up for the rapid descent, either – the extreme heat rising off the valley floor warms you, even with bare arms at 40mph. Watch out for wandering mountain goats, though.

Spend any time on the UK’s back roads and you’ll eventually experience too-close-for-comfort passes from cars, be on the receiving end of sarcasm, verbal abuse or be struck in the face by a discarded McDonald’s wrapper. With road cyclists still a novelty for UAE locals, you’re given a wide berth, and even shouts of encouragement from passing drivers. Sometimes, it feels like having a rolling team of supporters. 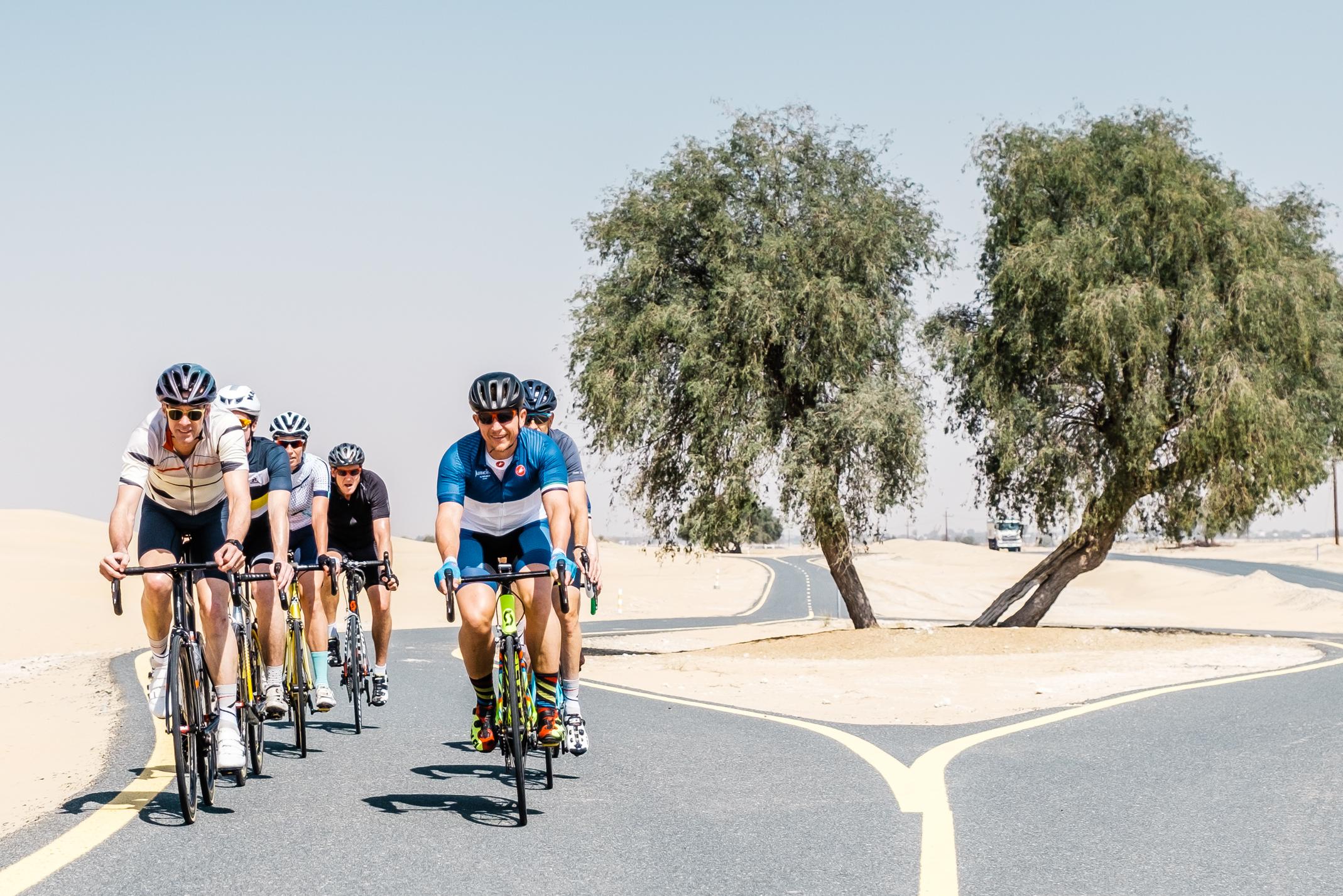 February’s Dubai Tour and Abu Dhabi Tour races see the likes of British sprint ace Mark Cavendish competing on local roads, and offer a chance to see many world-class race stars in action. A number of organised group ride events to train for will also give focus to your trip. The largest is December’s Spinneys Dubai 92 Cycle Challenge which even has a kids category, so the whole family can get involved. If you’re planning on going big, Jumeirah’s newly launched David Millar Ultimate Cycling Experience gives you the opportunity to enjoy the best of Dubai’s riding with ex-Tour de France racer Millar himself in October, for four days. Pack your bike, or hire one from Wolfi’s bike shop or Trek Bikes Dubai.

Emirates fly to Dubai from Gatwick and Heathrow from £306.

Jumeirah’s David Millar cycling package takes place from 10-14 October, staying in the five-star Al-Naseem hotel. The package costs from £1578 per person on a full board basis.

How Emirates plans to celebrate the UAE's National Day