Have you ever tried to find a boutique hotel in Dubai? I wouldn’t bother, because they don’t exist. Instead you get polished international chains, albeit with a nod – subtle or otherwise – to the UAE’s Bedouin heritage. There is a lot of marble, intricately carved dark wood furniture and plush tented canopies. Desert “retreats” come with private pools, spas and service so attentive that after a while there’s a danger that you may forget how to pour a drink or open your own curtains. Wellness retreats? They’re just not very Dubai. 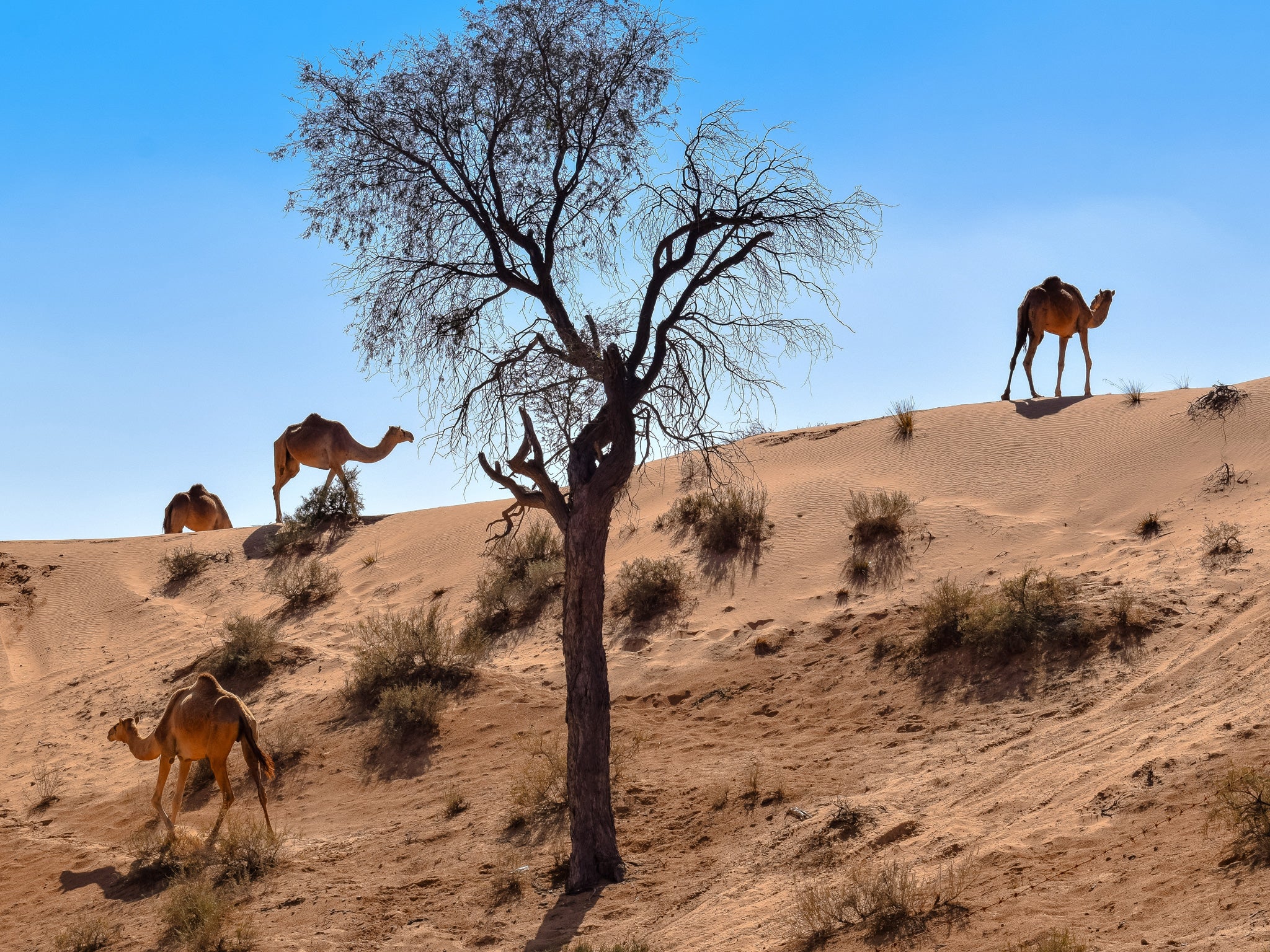 Which is where Ras al-Khaimah comes in. The northernmost emirate is building a reputation for itself as an adventure travel destination, and the new Alma Retreat is trying to fill the gap for those looking to get closer to nature. Guests stay in small but comfortable cabins in RAK’s dunes and can opt in to a diverse programme of activities including yoga, fitness classes, meditation, desert walks, art and music sessions, and time in the camp’s ice bath and “sweat lodge”.

So far, so very un-UAE? It gets better. Food is predominantly vegan – although there’s usually a meat or fish option with your plant-based lunch or dinner. “The concept combines physical, psychological and emotional health,” Alma’s founder Sarah Arnold tells me over a “desert walk”. “We want to provide something that helps guests feel more balanced… detach themselves from their looks, nurture their souls and be happy with who they are.” 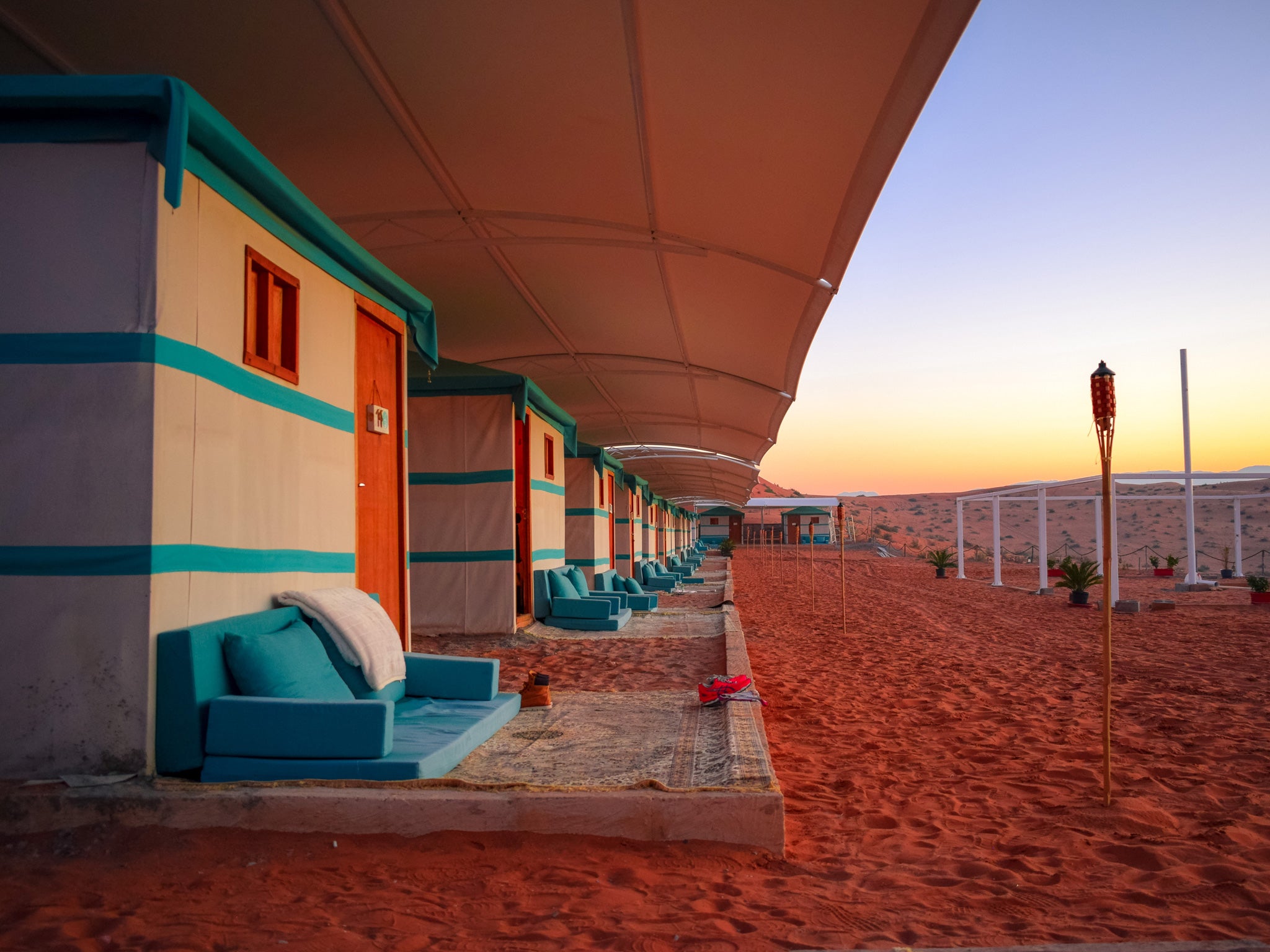 Originally from Germany, Sarah started the retreat after feeling burnt out by her demanding job as an IT strategist in Dubai. Having been to retreats in India and Sri Lanka, on her return, she felt the UAE was screaming for something similar.

She settled on less-developed, less glitzy RAK, a 45-minute drive from Dubai. Alma was soft launched with a tester season in February 2017. It didn’t go smoothly – for starters, the tents weren’t waterproof – but the kinks have been smoothed for this, the official opening season.

For me, the Alma was a stop-off after a hectic, boozy Christmas break in Australia. One that worked its magic immediately, too. It looks out onto dunes studded with shrubs and the occasional tree. The vibe they’re aiming for, says Sarah, is “simplistic luxury” and they’ve got it spot on. 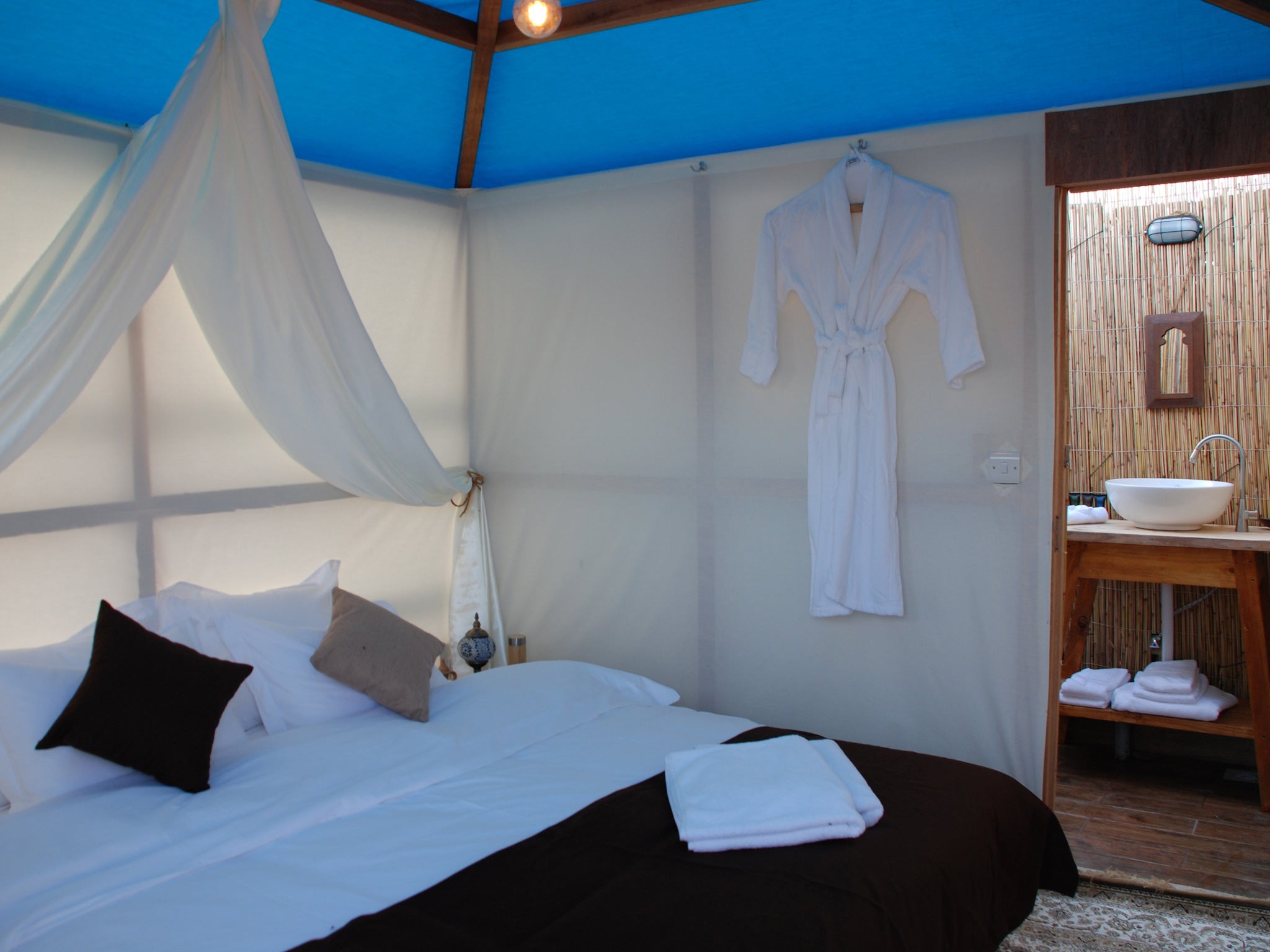 With their turquoise and white frontage, the 15 cabins contrast with the traditional darker hues of the decor at the neighbouring “Bedouin Oasis” camp. That one is a setup aimed at providing time-poor tourists with an “authentic” desert experience and giving them a crash course in the culture via the medium of belly dancers and – bizarrely – dodgy Europop on speakers.

So no, this isn’t in the middle of nowhere, but during my visit, the noise was minimal and, in a way, made me appreciate the calm, cool Alma even more. Not least when sitting on the low, sofa-style seating outside my cabin, looking out onto the dunes. It also was a great spot for stargazing.

Inside the cabins, white bedding continues the zen theme, and memory foam mattresses are a cut above your average camp bed. Bedouin-inspired touches such as the understated bed canopy and intricately patterned electric lamp add a little luxury, and while there’s no wi-fi, those who can’t face a digital detox can charge their tech. Every cabin has a roofless but entirely private bathroom at the back. The water isn’t heated but showers – even in January – are warm. 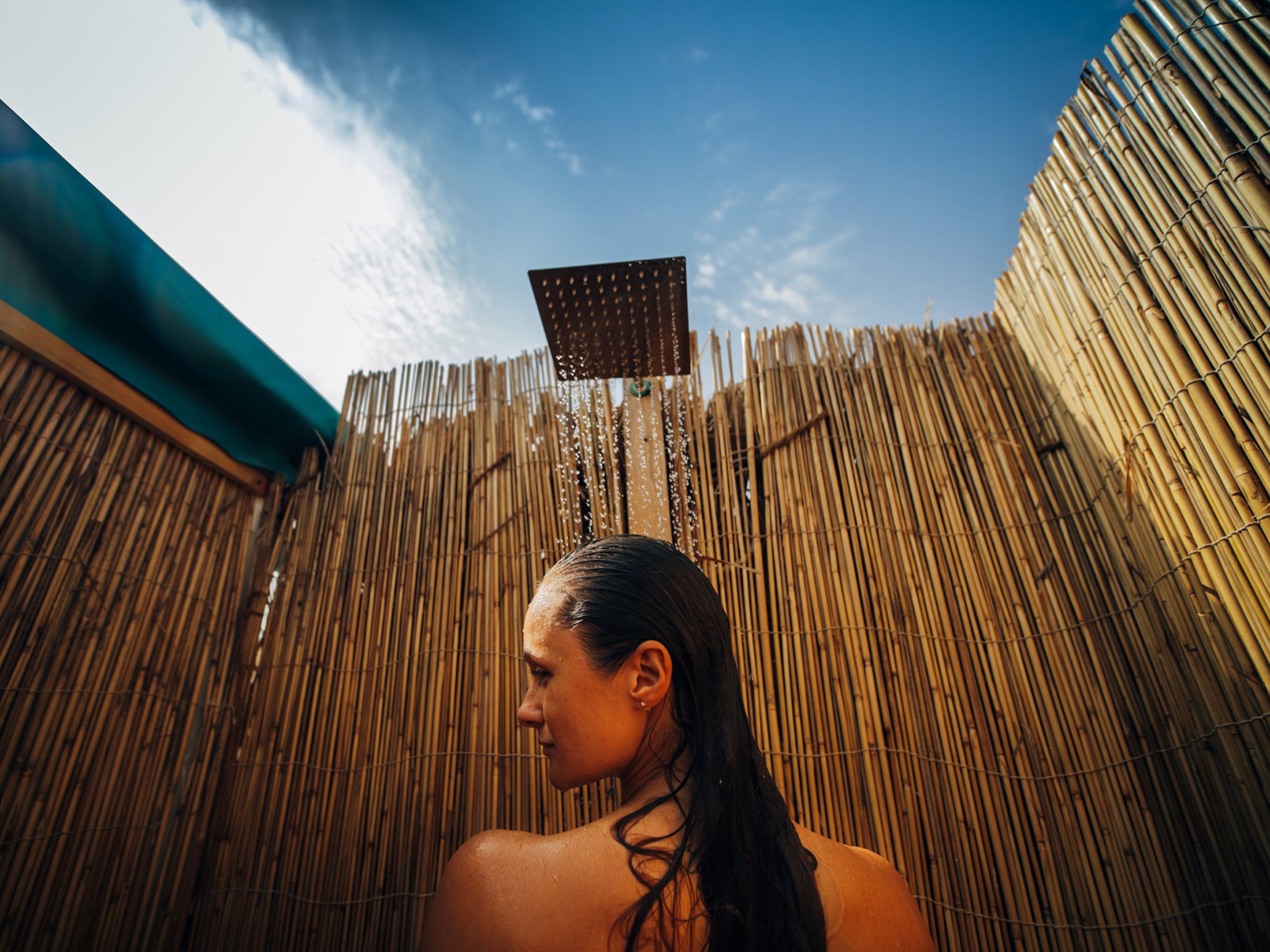 A workout and yoga area with a canopy – so you can exercise without heatstroke – was under construction during my visit, but the winter sun didn’t cause us any problems. With low-lying seating and wooden tables on Bedouin-patterned rugs, the communal area has the vibe of an upmarket hostel.

Yoga classes take place twice a day. Alma has a roster of instructors and Serbian native Eva was our teacher. Our group was mixed ability, from novices (like me) to years-long devotees. To deal with that, the teachers tailor sessions according to a group’s needs. The classes I did were variations of ashtanga – Eva encouraged the more experienced to try trickier poses and gave anyone struggling easy-to-follow tips. 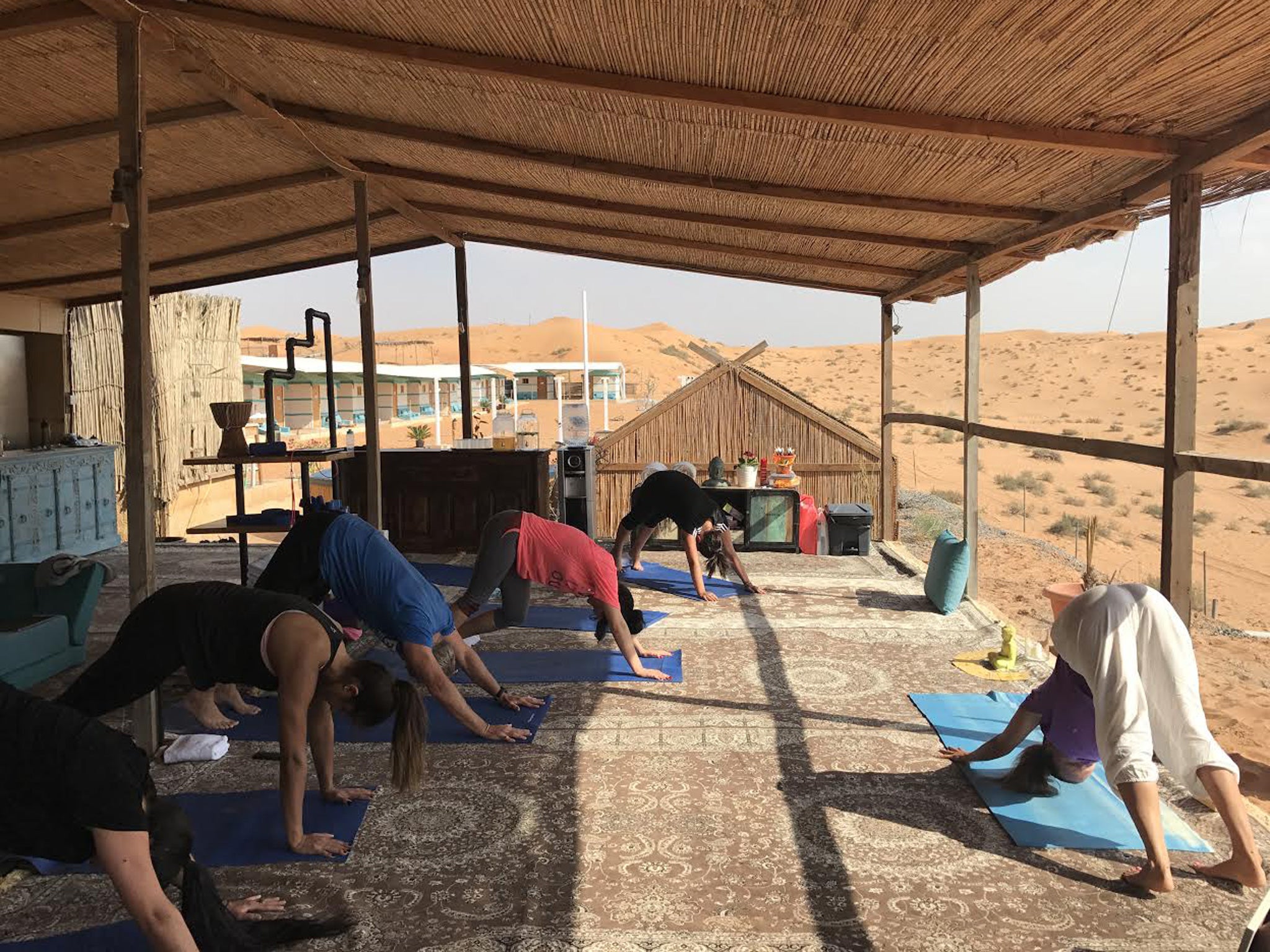 Alma’s USP is its flexibility. Instructors are available for one-on-ones during a stay and you can opt out of sessions as and when you like. But Sarah says that even those guests intending to relax find that they are seduced by the camaraderie that comes with following the group schedule. Speaking of which, despite preconceptions that wellness retreats tend to be overwhelmingly female, last season, Sarah says about a third of visitors were male.

I spent two nights at Alma. My full day started with a desert walk, led by personal trainer Leon Taylor, from Runcorn. He had us tramping up steep dunes (harder than it looked) at 6.30am, but the orange-hued sunrise and promise of a chia seed pudding and fresh fruit at the end of it made up for it. 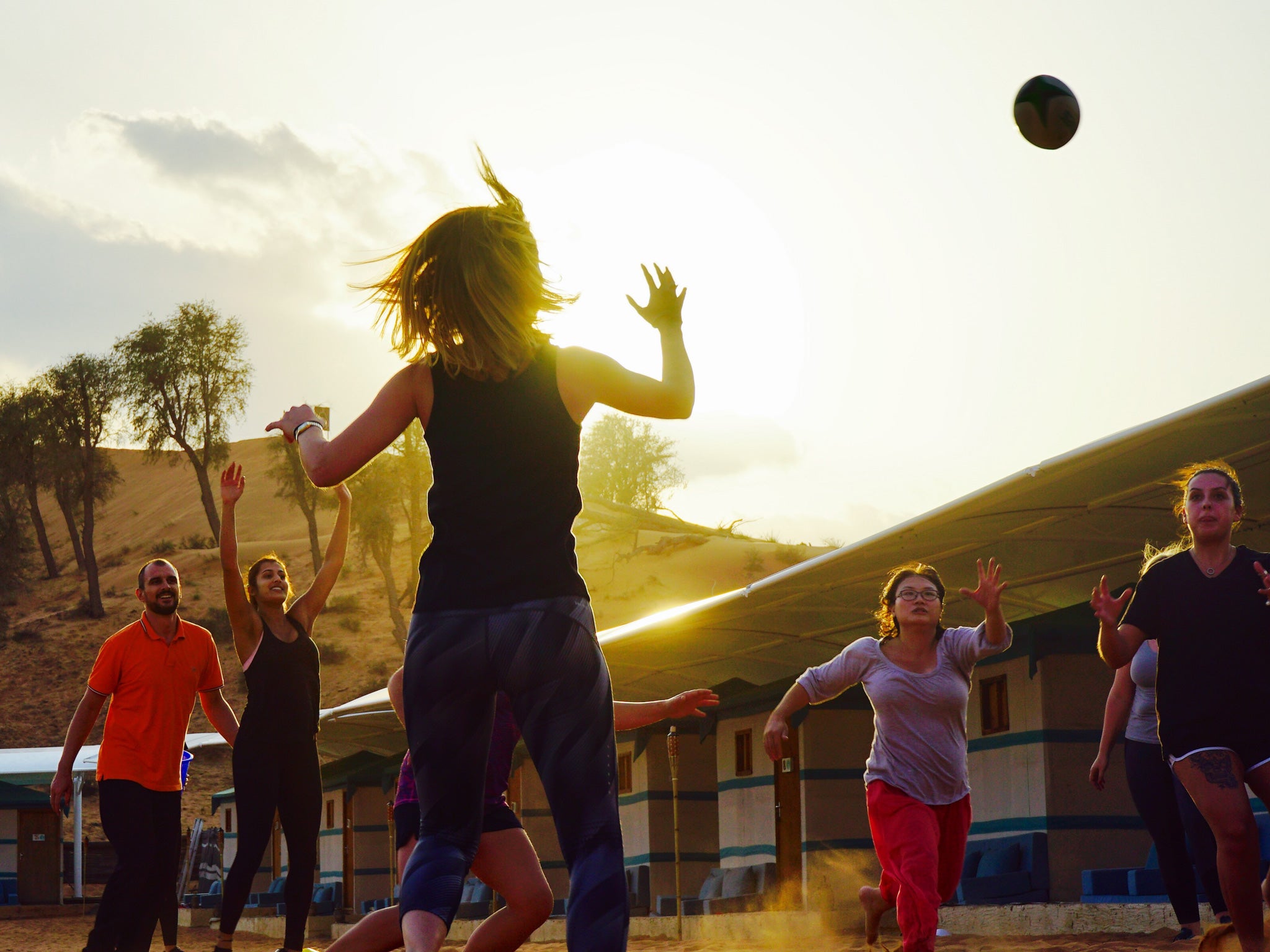 Later, Leon had our group working on an exhausting series of bodyweight exercises, from squats and lunges to push-ups and burpees. He’s a reformed bootcamp instructor (and a naval officer before that), but Alma has brought out his soft side – he balances military-grade discipline with dishing out sufficient praise to feel that our individual abilities were being taken into account. The afternoon involved a guided breathing session – not a natural fit for a cynic like me, but I did find it relaxing – followed by team games on the sand. 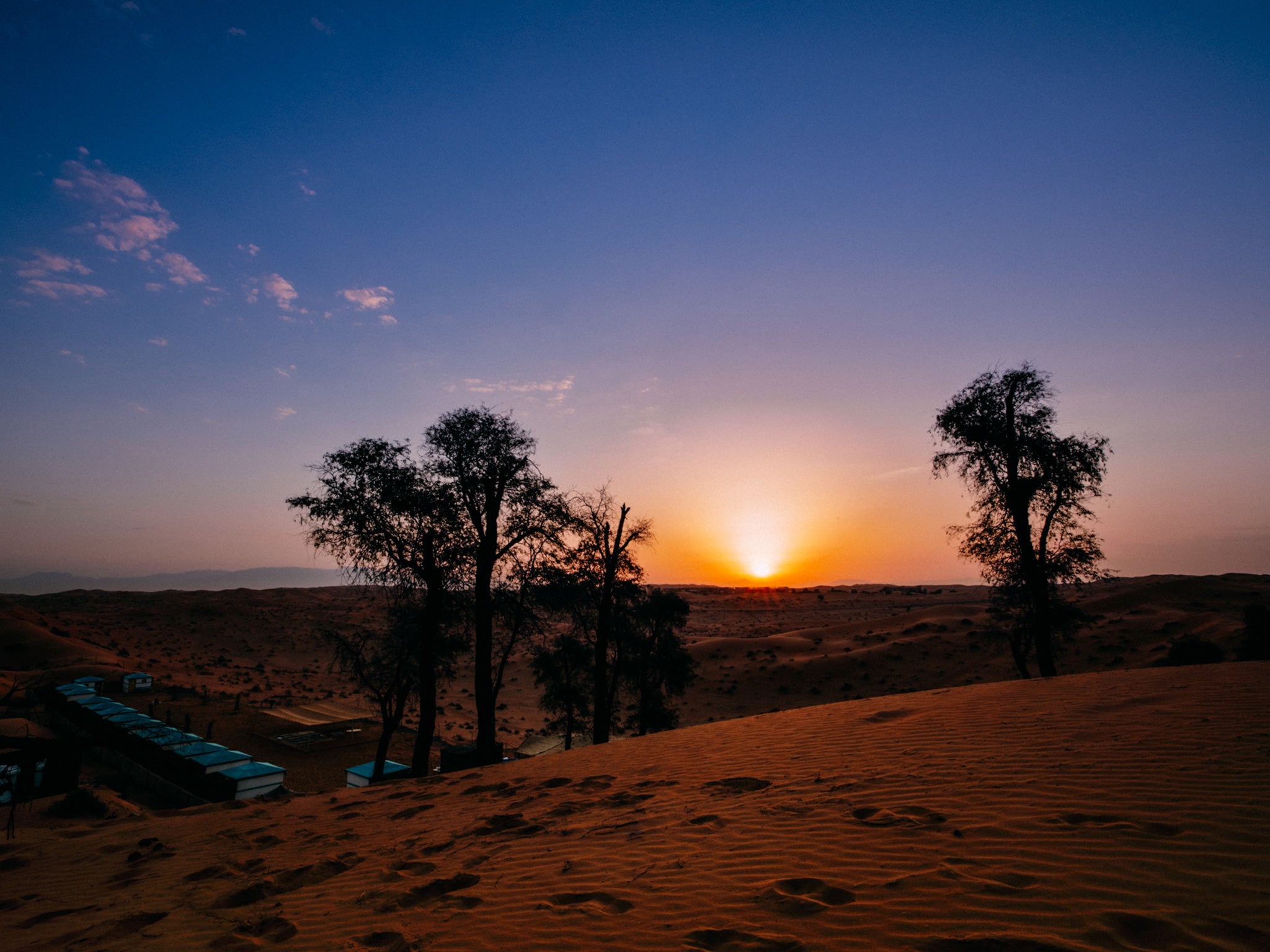 Another standout feature of the Alma is its food. “Too much is imported in the UAE,” says Sarah, who grew up on a farm and likes to support local producers. So here, the menu is the work of local caterers, with an emphasis on vegan dishes made from locally sourced ingredients: think pumpkin with chickpea curry and coconut cauliflower rice, and red lentil shepherd’s pie. It’s a world away from a Dubai buffet.

Booze is off the menu at the Alma and guests are encouraged to choose from the selection of herbal teas. We were offered a caffeine fix at breakfast in the form of “bulletproof” coffee: coffee, butter and coconut oil, which apparently can help with energy and cognitive function (though I can live without that, as well as the diluted apple cider vinegar we were also encouraged to drink). Anyone who gets peckish during the day can snack on rice cakes and nut butter or fruit. 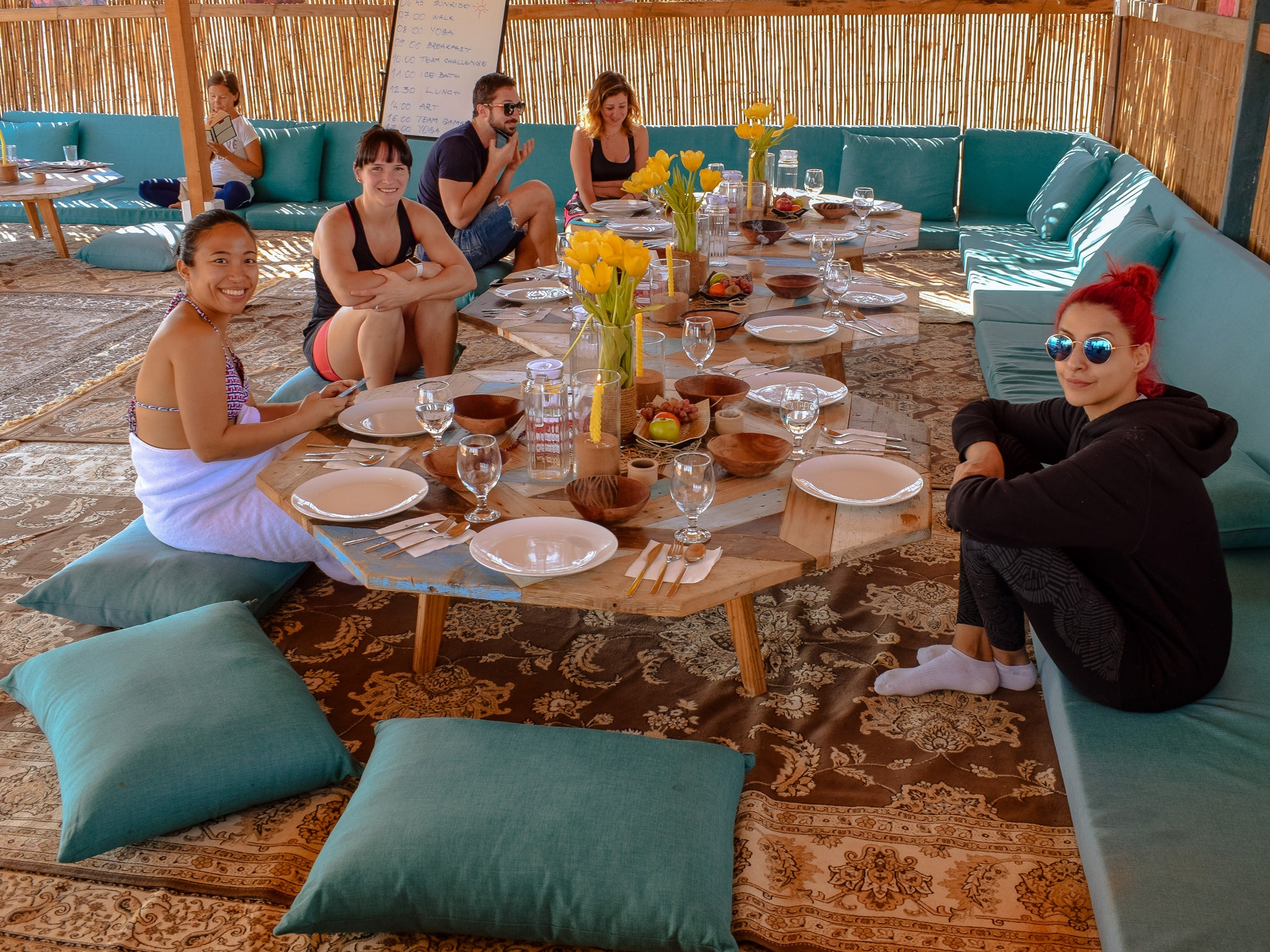 In the cool desert evenings, the “sweat lodge” was a welcome addition. A take on a Native American ritual, it is a sort of spiritual sauna experience, warmed by fire-heated stones, to “purify” mind, body and soul. Extreme versions involve intense meditation ceremonies lasting for several hours, though this is a lighter experience. Having had my spiritual fill for the day, for me it was more a place to warm up and relax before bed.

Two days at Alma left me wanting more, and I think that’s because of the flexible nature of the retreat. There really is something to suit everyone, including those who’d normally “stop and flop” at Dubai’s chain hotels. Anyone after a more focussed experience can opt for one of the specialist yoga, creative or fitness retreats planned for later in the year, and Sarah plans to expand the concept to include day retreats in Dubai and beyond. 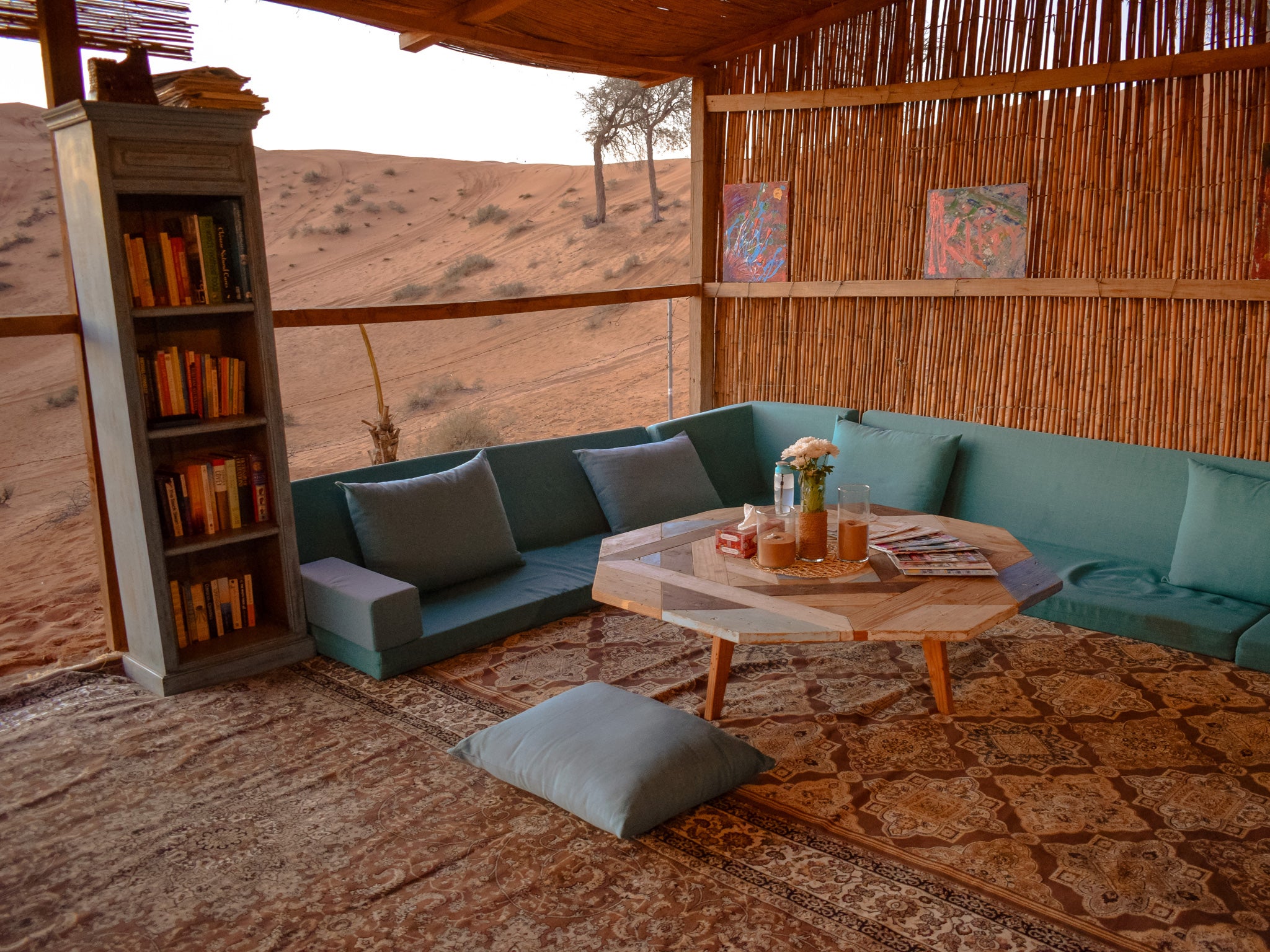 But that’s not to say it’s hard core. “We don’t want to be a military boot camp or an ashram,” says Sarah. “If you want to sleep, in you sleep in, or if you want to read a book instead of yoga, it’s your choice.”

And of course, if the serenity of the desert becomes too much, the bright lights of Dubai are less than an hour away.

Emirates flies to Dubai from Heathrow, Gatwick, Manchester, Birmingham, Newcastle and Glasgow from £323 return. Alma Retreat is a 45-minute drive from the airport.

Alma Retreat has cabins from £190 per person, full board.

Ireland is technologically proven to fill your heart ·