The WB Abu Dhabi, the world’s first Warner Bros branded hotel, will be operated and managed by Hilton

Abu Dhabi-based developer Miral has appointed Hilton to bring two of its hospitality offerings to Yas Island as the hotel giant invests AED627 million ($170 million) in the development.

The WB Abu Dhabi, the world’s first Warner Bros branded hotel, will be operated and managed by Hilton under its upper-upscale Curio Collection by Hilton brand, while the serviced residences to be managed by DoubleTree by Hilton.

BR Kiran, chief portfolio officer at Miral said: “Hilton is a globally recognised partner and we are honoured to be partnering with them… This supports our strategy and vision of creating unforgettable experiences for every guest on Yas Island, while increasing the diversity of hospitality options available to them.”

The agreement reinforces the existing collaboration which was initiated in 2017 between the two companies. Miral first appointed Hilton to operate and manage the Hilton Abu Dhabi Yas Island Hotel, currently under construction on Yas Bay at the southern end of Yas Island. 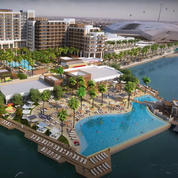 Carlos Khneisser, VP of development, MEA at Hilton said: “We are proud to be partnering with Miral on these two new hotels which will see us introduce two new brands to Abu Dhabi.”

The WB Abu Dhabi is currently more than 75 percent complete and is set to open in 2021, featuring 257 rooms.

DoubleTree by Hilton – Yas Island Residences is also more than 75 percent complete and is due for completion in 2021 and will offer a total of 156 units.

Experience Christmas joys in the tropics ·