Every 12 hours, a pedestrian is seriously injured by a car, lorry or bus on London’s streets – and one person is killed every week.

Eleven people on foot were killed in the borough of Westminster in the three years to 2016; another 11 in Hackney and 11 more in Tower Hamlets. Ten people died in both Havering and Greenwich.

But those stark numbers hide the real risk, according to research by Dr Rachel Aldred at the University of Westminster. Once the number of walking trips is taken into account the borough where pedestrians are most in danger of death or injury is Barking and Dagenham.

What is Walking the City week?

As cities around the world close central streets to cars to mark World Car-Free Day, Guardian Cities is looking at the joys and trials of urban walking.

The US humourist and writer David Sedaris tells us about walking in cities from Raleigh to Reykjavik. Will Self explains what he learns from perambulations in London, there’s Fran Lebowitz in New York, Helen Garner in Melbourne, “natural navigator” Tristan Gooley in Portsmouth, and writers on Delhi and Newcastle, Cairo and Wellington.

Laura Laker casts a critical eye on the performance of Vision Zero, the global city scheme to eliminate traffic deaths. London has signed up – will it enjoy the success of New York, or the delays of LA? The recent blocking of Sadiq Khan’s plans to pedestrianise Oxford Street does not bode well.

Correspondent Stephen Burgen samples the newfound silence in the Spanish car-free city of Pontevedra, and Matthew Keegan discovers what prompted Hong Kong to reopen a popular pedestrian street to vehicles.

Renate van der Zee looks at the rise, fall and rebirth of the Lijnbaan in Rotterdam – Europe’s first pedestrianised street – while Rachel Aldred at the University of Westminster crunches the numbers to identify the most dangerous London boroughs for people on foot.

Oliver Wainwright explores the City of London’s forgotten Pedways – and asks whether these 1960s walkways can make a comeback.

We consider the phenomenon of “desire lines”, examine the art of following a stranger in the hope of seeing a city in a new light, and much more.

The risk to pedestrians in the east London borough is twice as high as that in Kingston upon Thames or Richmond – and 28% higher than the Greater London average.

While Barking and Dagenham has one of the lowest figures for pedestrian fatalities or injuries – a total of 40 between 2014 and 2016 – the risk to pedestrians is high once the low number of walking trips in the borough is taken into account.

Aldred started with a previously unpublished version of the London Travel Survey which included daily walking trips by London residents, broken down by borough. Her analysis included tourism figures and commuting data at borough level from the Census and London Data Store.

For every billion walking trips that occur in London, 600 people are killed or injured on average, the analysis showed. The number rises to 825 in Barking and Dagenham.

Four more boroughs averaged more than 700 deaths or injuries per billion walking trips: Hackney at 796, Brent with 793, Redbridge at 790 and Haringey with 770.

“We don’t know why this gap exists, although it fits with other evidence suggesting pedestrians from lower income backgrounds are at higher risk of injury than are better off pedestrians,” said Aldred. “It reinforces the need for proven measures to reduce road danger across London, such as reducing speed limits and ensuring that drivers stick to those lower speeds.” 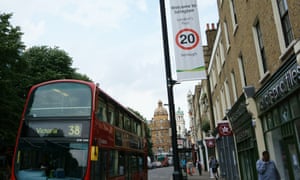 Every day there are more than 24 million walking trips in Greater London. In some boroughs it may take several years for a billion journeys on foot to take place, but a matter of months in more congested areas.

In July, London mayor Sadiq Khan announced the city would adopt the Vision Zero programme. The scheme has a target of no road deaths or serious injuries by 2041 – and a 65% reduction by 2022.

Richard Lambert, London manager of Living Streets, said he was encouraged by the adoption of Vision Zero. “By making our streets safer for the most vulnerable road users, including those with wheelchairs, buggies and those living with sight loss, we make streets better for everyone,” he said.