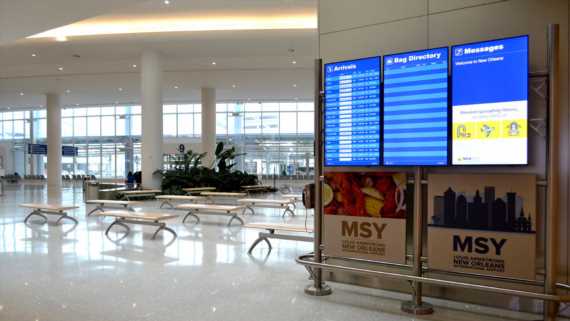 New Orleans remains without power following a battering from Hurricane Ida, but its homes and businesses were largely spared from flooding, according to a statement on Monday by New Orleans and Company, the city’s nonprofit tourism-marketing organization.

“The New Orleans flood-protection system designed after Hurricane Katrina worked as planned. Our businesses and homes did not take on water, and there are no rescue operations currently underway in New Orleans,” the statement read.

Many hotels in New Orleans remain open using generators for power and are serving guests and first responders.

“Our biggest challenge at this time is that the city is completely without power,” New Orleans and Company said. “Several transmission lines that deliver power to New Orleans are out of service due to storm damage.”

Entergy New Orleans, the public utility, is assessing the damage and it could be days before the company provides an estimate on when power will be restored.

While the Louis Armstrong New Orleans International Airport has remained open, all flights were canceled on Monday and the airport announced on Twitter that all flights on Tuesday would be canceled as well.

“We are working with airlines to resume commercial service, but the situation is fluid as we all attempt to rebound from Hurricane Ida. We may see very limited flights tomorrow, and hope for more normal operations later in the week,” the airport said.

Some of New Orleans’ neighboring parishes reportedly sustained catastrophic damage. Ida made landfall as a Category 4 hurricane with winds up to 150 mph.

Numerous roads are closed or impassable, including access roads to New Orleans. Residents and visitors are being asked to stay indoors and off roads.