It was so easy to fall in love with Copenhagen. Then again, how could we not when you consider it’s the home of famous fairy tale author Hans Christian Andersen? It’s picturesque harbor, magnificent canals, copper-domed landmarks and cobblestone streets conjure up a welcoming atmosphere. Surprises around every bend make this city one of our European favorites.

Knowing we’d only have one day in port to explore Denmark’s capital and one of Europe’s oldest cities on our recent family Disney cruise meant maximizing our time to get the most out of this charming provincial town. One of the best ways to get around the city is by bicycle and it seems as though everyone is riding one. Like many other European cities, walking is a way of life in Copenhagen and its top attractions are almost all within reasonable walking distance.

One of Copenhagen’s most visited sites is The Little Mermaid (Den Lille Havrue), a stunning bronze and granite statue depicting a legendary mermaid who becomes human. A gift from Danish brewer Carl Jacobsen to the City of Copenhagen, the statue was inspired by Hans Christian Andersen’s fairy tale about a mermaid who gives up her life under the sea to be united with her young, handsome prince.

If the story sounds even more familiar, it’s because the statue and story were the inspiration for Disney’s classic animated film The Little Mermaid.

The iconic 17th-century picturesque waterfront and canal district of Nyhavn is one of Copenhagen’s most photographed attractions. And it’s not hard to see why it’s received so much acclaim. It’s everything we anticipated it would be—and so much more.

Lined with rainbow-hued historic gable houses, restaurants, bars and tall ships docked along the quays, this charming quintessential Scandinavian neighborhood has a distinct nautical atmosphere and a character all its own. 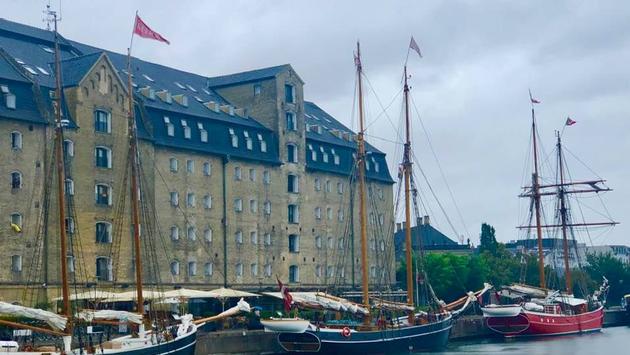 As a maritime city, Copenhagen sports a historic harbor and one of the most relaxing ways to see it is boating down its charming canals. Traditional canal guided boat tours, romantic gondolas, kayak trips and private boating experiences are among the many ways to see this magnificent city from the water. Nyhavn has several of these vendors right on the waterfront. Our time in port only allowed us a one-hour canal excursion, but it was well worth it viewing Copenhagen from a completely different perspective.

Four 18th-century French-style rococo mansions surrounding one of the most attractive town squares in Europe have been the official residences of the Danish royal family since 1794. One of the world’s oldest monarchies, the royals moved to this location after the original Christiansborg Palace burned.

The famous changing of the guard ceremony at Amalienborg Palace is a time-honored tradition dated back to 1658. Every day at noon, the Danish Royal Life Guard dressed in their ceremonial uniforms and bearskin hats march through the streets of Copenhagen to the palace square for the official changing of the guard.

Bisecting the heart of the old city, Strøget is Copenhagen’s main street. This famous avenue is one of Europe’s oldest and longest pedestrian thoroughfares. After World War II, most of the old center of Copenhagen was pedestrianized making it a paradise for walkers and shoppers. 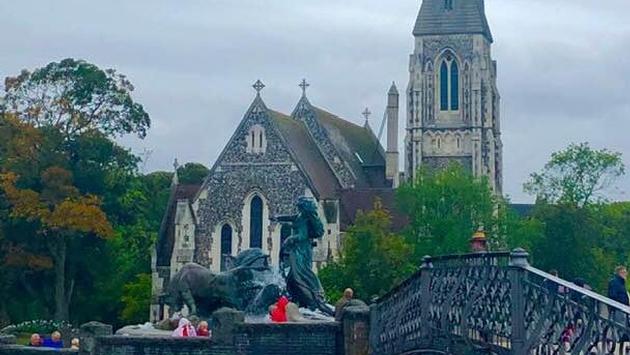 Copenhagen is filled with beautiful churches. So much so, you don’t even have to go searching for them. It seems that around every corner there’s another, each more amazing than the one before.

St. Alban’s is an Anglican Church built in the gothic style. The Church of our Saviour is well-known for its stunning serpentine, golden spire that reaches 300-feet above the street level. A 400-step climb to the top provides sensational views of Copenhagen from the top. Frederik’s Church popularly known as The Marble Church adjacent to the Amalienborg Palace has the largest church dome in Scandinavia. Known for its grandiose architecture, the church’s iconic greenish-copper dome rises high above its neighboring rooftops. 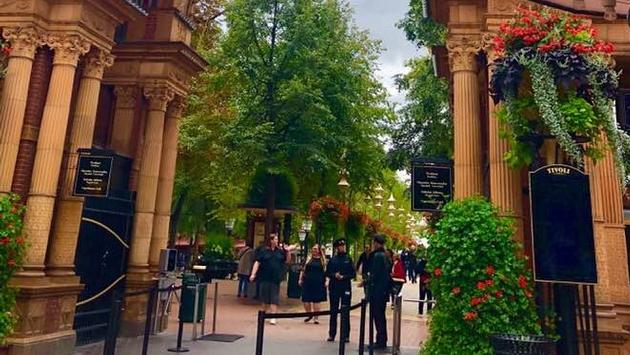 Created in 1843, the awe-inspiring Tivoli Gardens has welcomed hundreds of thousands of locals and tourists to its location and it’s no surprise. The property is one of Europe’s most visited theme parks featuring acres of dazzling gardens, a Chinese-inspired bamboo forest, water fountains, games, restaurants, and of course, amusement park rides for the entire family.

There’s something that draws visitors to the immortalized statues of Copenhagen’s native son Hans Christian Andersen. Though there are many of these statues of the world-famous author and poet throughout the city, the bronze figure near City Hall is likely the most famous. The monument depicts him holding a book and cane and a well-worn lap from the children of all ages who sat on his knee—just as they did in real life.

With limited time in port, we knew it wasn’t possible to experience all the amazing tastes of Copenhagen. Visitors will find a myriad of dining choices here. For us authentic and regional was the way to go.

Locals love their sausage and we couldn’t resist the savory aromas wafting from the ubiquitous street food vendors. So, our first stop was for rød pølse (red sausage). Served inside a fresh bun with a choice of toppings, it’s so good you won’t want to share. 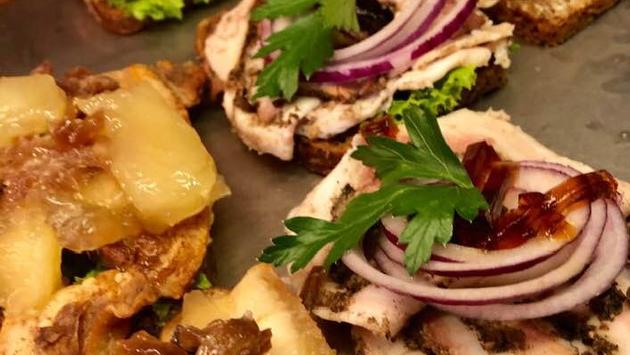 Smørrebrød is one of Denmark’s most traditional dishes, a favorite delicacy that’s served as an open-face sandwich. Want to know where to find the best places serving this Scandinavian delight? Ask the locals.

We found our Smørrebrød at Palae Bar, a laid-back eclectic pub located just a few blocks from the harbor area. Patrons enter the restaurant’s kitchen and pick from a range of prepared sandwiches featuring beef, pork, cheese, eggs, vegetables and of course, fish. These delectable delights paired beautifully with the on-tap Danish beers. Guaranteed this neighborhood jewel deserves a return visit.

“Life itself is the most wonderful fairy tale,” said Hans Christian Andersen. One day in captivating Copenhagen was a living part of our real-life fairy tale.