Despite being a familiar horror movie character, the ventriloquist’s dummy, with its clunky mouth, heavy eyelids and twisting head wasn’t meant to be fearful when it was invented for 18th century music hall entertainment. This museum houses the largest collection of ventriloquial figures and memorabilia in the world. It once belonged to William Shakespeare Berger, former president of the International Brotherhood of Ventriloquists.
• venthaven.org 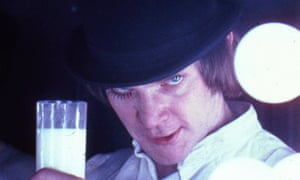 Relive the terror of “redrum” and the “Droogs” (pictured) in this touring Stanley Kubrick exhibition, with film projections, behind-the-scenes audio and video, costumes and other original objects, research and production documents and camera equipment from the legendary director’s career. Ephemera comes from 2001: A Space Odyssey, A Clockwork Orange, The Shining, Eyes Wide Shut and other cult films.
• CCCB in Barcelona (until 31 Mar 2019), then the Design Museum in London (26 April-17 Sept 2019), stanleykubrick.de 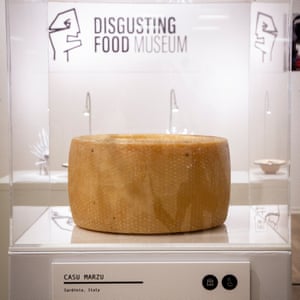 The most disgusting food in the world – in pictures

This newly opened exhibition includes all kinds of stomach-churning dishes from different countries, including Swedish fermented herring, roasted guinea pig from Peru, Icelandic rotten shark and maggot cheese from Sardinia. For more adventurous visitors there are even opportunities to taste or smell some of the 80 exhibits. It was created by Dr Samuel West, the man behind the Museum of Failure in Helsingborg, Sweden, which exhibits innovative, but unsuccessful inventions from the past.
• Until 27 January 2019, disgustingfoodmuseum.com 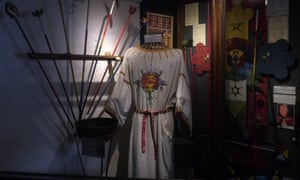 This small harbourside museum explores the history of British magical practice, and claims to have the world’s largest collection of occult exhibits. On display are ritual chalices, potions and talismans owned by prominent figures in the occult world, and other items related to folk and ceremonial magic, freemasonry, alchemy, the pagan religion of Wicca and the witch trials of hundreds of years ago.
• museumofwitchcraftandmagic.co.uk 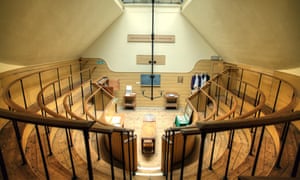 Scared of hospitals? Nosocomephobics will shudder on entering this surgical theatre, the oldest in Europe, which predates anaesthetics and antiseptics. Accessible via a narrow 52-step spiral staircase, it is in the attic of an early 18th-century church on the site of the old St Thomas’ Hospital, and once also served as a herb garret used by the apothecary. There are original wooden and metal operating tables, several rows of seats once used for students viewing operations, alongside old and somewhat horrifying medical equipment on display used in cupping, bleeding and childbirth.
• oldoperatingtheatre.com 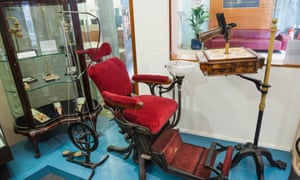 A collection of 30,000 items from the history of UK dentistry that’s enough to set your teeth on edge. A selection of the artefacts, some dating as far back as the 17th century, can be seen in a small cavity of an exhibition space at the BDA HQ in Marylebone, central London. Exhibits include ancient dental chairs, dentures (such as an 18th-century set made from real teeth), drills and torturous-looking equipment, alongside toothbrushes and retro oral hygiene products.
• bda.org 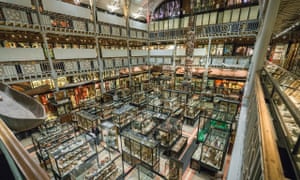 A bizarre display of real tsantsas, or shrunken heads, from the upper Amazon region between Peru and Ecuador, is on display at this Oxford museum. Tribes believed they could harness the power of enemies, and the gory details involved discarding the contents and immersing the skin in hot water, and then filling it with hot sand. The museum is working with communities where collections were acquired in the past, to sensitively consider the meanings of the ritual.
• prm.ox.ac.uk 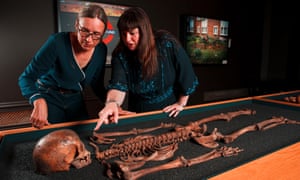 The gothic revivalist main building of the University of Glasgow is home to Scotland’s oldest museum. Founded by Scottish physician William Hunter and opened in 1807, it houses one of Europe’s largest anatomical, pathological and zoological specimen collections. There are medical instruments and equipment, prosthetics, skeletons and pickled parts, animal taxidermy and anatomical drawings, alongside his original specimens in the separate Anatomy Museum (by appointment only).
• gla.ac.uk 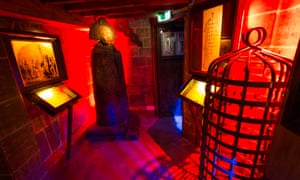 From the spiked inquisition chair to thumb-screws and skull-crushers, visitors can trace a history of pain and punishment along a few dark corridor rooms at this tiny Dutch museum. The medieval torture equipment from around Europe would have been used to force suspects and lawbreakers to confess to crimes, alongside stocks and cages used for public disgrace. The museum was founded in 1988, “with the idea that torture and death penalty belong in the museum”, and includes information for visitors on the work of Amnesty International and human rights treaties.
• torturemuseum.com

Germy delights await visitors to this museum in Amsterdam, which gets up close and personal to tiny invisible life-forms. It’s mysophobia-inducing description of microbes reminds us that “They are on you. In you. And you’ve got more than a hundred thousand billion of them.” But the museum hopes to educate visitors on microbiology and emphasise its importance to humans, nature and daily life, through exhibits such as a giant virus aquarium video screen, and a germ-measuring Kiss-O-Meter.
• micropia.nl 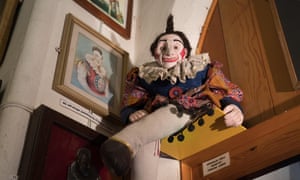 Coulrophobics look away now. Thousands of perpetually smiling faces greet you as you enter this small clown museum in Leipzig. It is crammed with puppets, accessories, newspaper articles, posters, photos and over 3,000 figurines. Some of the exhibits, including giant clown shoes, makeup cases and other costume items, have been donated by clowns who visit the museum for special events.
• clown-museum.de 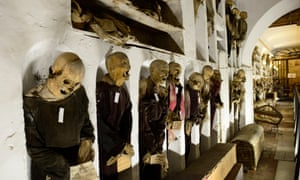 A macabre display of the world’s largest collection of mummified bodies awaits inside the catacombs of Palermo. After Capuchin friars were found naturally mummified in the 16th century, living friars saw it as an “act of God” and chose to display them in a new crypt. Thousands joined them from the community over time, artificially mummified as a status symbol and displayed alongside. Visitors can explore five underground corridors of mummies, some arranged by profession, gender and social class.
• palermocatacombs.com 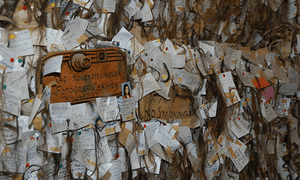 There’s something weird about human hair when it’s not attached to a head, and this basement space is filled with the severed locks of more than 16,000 women. The story behind it is a little less creepy, however: the museum was created in 1979 by local potter Chez Gallip. A friend of his, saddened by having to move away, was given a lock of hair by a female friend to remember her by. Since then, women visiting from around the world have added to the collection (and donating now forms part of a competition to win a holiday in Cappadocia, including participating in Chez’s pottery workshops).
• chezgalip.com 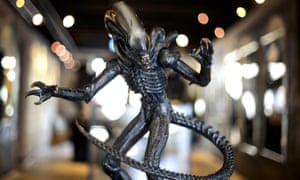 In the 400-year-old walled city of Gruyères, at medieval Château St Germain, visitors can step inside the dark creative mind of Swiss artist HR Giger. In his mythological and futuristic style, there are paintings, sculptures, furniture, film designs and other exhibits, dating from the early 1960s to the present, some recognisable from films such as Alien, Dune and Poltergeist II. The adjacent bar, with spinal arches and seating, is also modelled on his sci-fi, biomechanical designs.
• hrgigermuseum.com 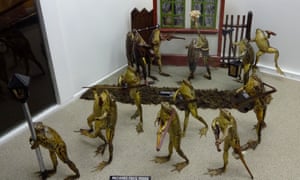 Slimy and green; cute (and secretly a prince); or a young wizard’s pet – frogs are a popular motif in films and fairytales connected to magic and mystery. In this museum, however, one man’s taxidermy mission around 100 years ago has turned into a sideshow of hundreds of the amphibious creatures frozen in time, in human poses at the circus, in a classroom, playing poker or tennis.
• froggyland.net 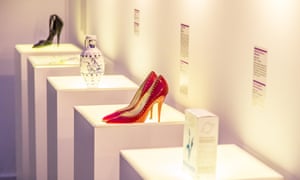 Emotional collapse, long lonely nights, intense heartbreak … this Croatian museum dedicated to love and loss has a collection of mementos of past relationships that has grown so big it now has a second site in LA. Each item is accompanied by personal, anonymous stories from contributors, who can send items from around the world in physical or digital format. From belly button fluff to diamond rings, seemingly mundane objects, sentimental items, letters and photographs are annotated and become emotionally charged.
• brokenships.com 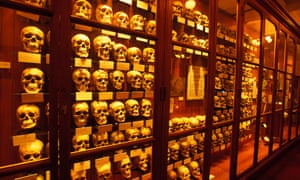 If you’ve got any skeletons in your closet, you could donate them to the Mütter’s extensive collection, which includes the tallest skeletal specimen on display in the US. Alongside skulls and bones, the museum, which is set out in 19th-century cabinet exhibition style, is also home to Einstein’s brain, along with larger-than-life anatomical models from various historical periods, made from wax, papier mâché, plaster and wood.
• muttermuseum.org

The House on the Rock, Wisconsin 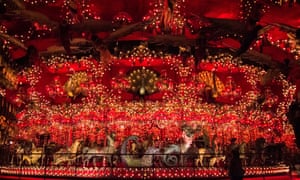 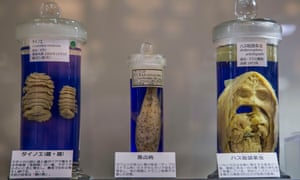 There are more than 300 rare creepy-crawlies and microscopic bugs in this small city-centre museum, dedicated to the science of parasitology, including an 8.8 metre-long tapeworm. There’s also a research library containing 60,000 specimens, alongside 50,000 papers and 5,000 books on the subject, and a gift shop with tapeworm T-shirts and parasites in acrylic for entomophobic friends.
kiseichu.org

For an out-of-body experience, visitors can touch human brains at India’s National Institute of Mental Health and Neurosciences. There are hundreds of specimens, donated with consent and collected by neuropathologist Dr Shankar since the 1970s. Some are sliced, pickled and encased in plastic, some showing the results of diseases and infestations such as tapeworms. There’s also an enamel basin, with brains, nerves and other organs in formalin to hold and examine during tours.
• museumsofindia.org 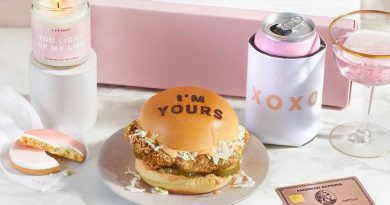