Preconceptions about places we’ve never been are formed in a multitude of ways: what we read, watch or hear about it, and sometimes even the people who are from there – whether we like them or not. Occasionally, there are areas we have no idea about. For me, that was a section in the heart of England: the south Midlands. Then I went to swim there.

“What’s this area called?” I had asked Bryn Dymott, my swimming guide for the day. Bryn had met me off the train in St Neots, Cambridgeshire, and had rapidly transported us into … well, just where had he taken us?

His answer didn’t have the geographical exactitude I was after but it was heartfelt. And, after a double-dipping day with Bryn, I saw what he meant.

Bryn likes bridges. “I’m that tragic person,” he said, “who drives over a bridge and thinks, could I swim that?”

So our first stop – which I established was in Northamptonshire – was a bridge with a special jumping-in spot where, when it’s full, the river Nene pushes out of a narrow pipe into a churning maelstrom. “You might think we don’t have that mad, tumbling water here,” Bryn said, of this pretty flat area, “but there’s still lots of fun to be had.”

On this visit, the water was too low to provide such fun, so we carried on to a spot further down the Nene, near Oundle, where the pontoon of a rowing club provided a handy place to get in and out. The river was thick, flat green and we swam from village church to village church. A man in a tractor in a riverside field had no idea we were there, this was pastoral by stealth. Bryn, like an aquatic pied piper, led me carefully past a pair of swans. “They could break my arm,” I joked. “That’s a myth,” he said. “What they do is force you under with their wings, then get you with their huge swan claws.” There’s always a dark side to these pied piper types. 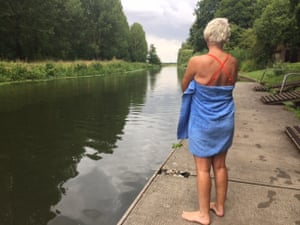 As we returned to the pontoon, a couple of narrowboats chugged up (this is a navigable river, so wear a bright cap and swim on the right) and we stopped to make sure they’d seen us, low in the water. “Are you wild swimming?” yelled an old fellow from one. “Open-water swimming,” Bryn yelled back, and indicated around us. “It’s not exactly ‘wild’ is it?”. We waved them off and for a moment, it felt a bit Mike Leigh.

Our second swim was replete with geographical exactitude. We were 12 miles equidistant from Bedford, Northampton and Milton Keynes, right by the rec’ in Olney, Buckinghamshire. “You know what a rec’ is?” Bryn asked as we walked across a wide mown field with room enough for plenty of picnickers. Of course I knew, (it means recreation ground) and we chatted about our swimming origins; how the outdoor pools of our childhoods were extant and how he’d come to open-water swimming.

“Waterlog,” Bryn answered. He’d picked up Roger Deakin’s book on holiday, read the first four chapters and that was it: he was hooked. They say nothing matches the zeal of a convert and Bryn is also an enthusiast, an encourager, an enabler – and a breaststroker, at that. You don’t see many of those around, do you?

Bryn’s zeal took me to the River Great Ouse at Olney, a fantastic swim spot he was keen to show off. There’s every variation of green: newly mown, the lime zing of twisting willow leaves, the boiled blue-green of stiff reeds and the dull felt of the deeper water. Where the river makes a small swoop, the council have added wide steps for an easy entry point, contradicting the nearby sign that says Swimming Not Recommended. Bryn explained how that sign read No Swimming for a while, but local people complained, as swimming here has tradition. As if to prove the point, as we got out, a gang of teenage boys launched themselves in with the abandonment of young people who have just finished an exam. 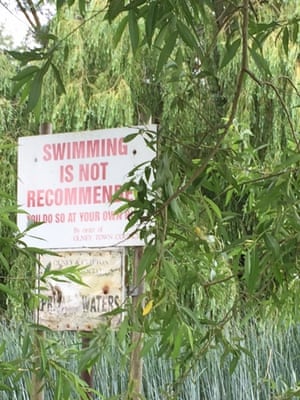 Someone sat smoking on the steps as we got in. “It’s dangerous round that corner,” she said. “It’s really not” said Bryn, and we set off into “danger” – swimming against a slight current, a few long weeds occasionally stroking our legs. A dog being walked along the bank caught sight of us and stood, staring, bemused. No swans, no boats, just an abundant edging of wild flowers, our two heads on the look out for kingfisher and voles, and warm water doing a slow dance.

We swam up to where a cable crossed above us, about 1km there and back. Bryn wasn’t keen to go further, it gets weedy he said, and he didn’t want his charge, me, to get swimmer’s itch. He explained it was a parasite from snails that gets under your skin. Oh god, I thought, it’s swan claws all over again. The realities of nature spoiling a lovely nature trip.

Swimming back, we saw someone ahead of us. Bryn was chuffed: it’s rare enough for him to meet another swimmer in the water, let alone one he doesn’t know. We three chatted while the sun dried us. Turned out, Andy and Bryn had swim friends in common, and Andy and I had pools in common – he was headed to Brockwell Lido in south London the next day. This happens with swimmers, we find community.

I got back on the train at Saint Neots, with a much clearer idea of where I had been, and why it offers so much. It really is a river-swimmer’s paradise – just watch out for swans and itching.

• Book tickets through the Trainline app (thetrainline.com), Europe’s number one train-travel app. It features live travel and platform information and the BusyBot feature, which predicts where you can find a seat on the train – all designed to make your journey easier

Jenny Landreth is author of Swell, A Waterbiography (Bloomsbury Publications, £8.99)

You Can Get Free Drinks at Starbucks Today

Happy isolation: hiking the ridges of the Larapinta trail