With the November 22 release of Disney’s ‘Frozen 2’, plenty of fans are soon to be dreaming of a visit to Elsa and Anna’s native Arendelle, a fictional country strongly inspired by the striking mountains and distinctive fjords of real-life Norway, which happens to be one of the world’s cleanest, safest and most awe-inspiring destinations.

After the original ‘Frozen’ animated film, Disney fans flocked to Norway to witness the pristine, wintery wonderlands still to be seen in seaside Norwegian villages and across Scandinavia.

With the much-anticipated sequel about to arrive, full-service rail tour operator Vacations By Rail has prepared a few immersive and engaging itineraries, which will transport guests through stunning Norwegian landscapes to experience an icy, yet captivating, kingdom, complete with guided tours that teach them about the region’s history.

This seven-day tour starts in seaside Bergen, located on Norway’s West Coast, where the historic waterfront is also a UNESCO site with its historic quarter boasting buildings that have been preserved since the 15th century.

Travelers will board the Bergen Railroad and traverse Norway’s otherworldly fjordlands, passing spectacular mountain panoramas until they reach Aurlandsfjord, a scenic lake surrounded by towering cliffs. They’ll spend a couple of nights in Flam, a fjordside village set deep within one of Europe’s most picturesque forested landscapes, then hop aboard a boat that leads through the mountains to the small village Undredal, well-known for its abundance of goats and freshly-made brown goat’s cheese.

Another train ride transports passengers to Oslo, where they can explore the capital city’s cultural riches while staying at the Thon Hotel Opera. An abundance of parks, museums, art galleries, royal palaces, plus a castle and fortress offer a multitude of sightseeing opportunities and activities upon reaching this major urban center.

Norway’s majestic mountains and pristine fjords give way to the tranquil landscapes of Sweden during this epic journey that incorporates just about every great Scandinavian rail experience.

Guests will start by exploring modern Stockholm, along with its historic Old Town, before speeding by rail alongside glorious scenery to Ostersund, then crossing the Arctic Circle into the ‘Land of the Midnight Sun’ before winding through the mountains into Norway. They can spend a day at leisure in Narvik, then set off down the coastline to Trondheim, where they can learn about the region’s musical history, and then follow the River Rauma to Geiranger, where they’ll behold the steep sides of the fjord up close via a boat cruise.

Another train ride past picturesque mountains and valleys brings passengers to Flam, where they might take an excursion on the Flam Railroad, one of the world’s steepest rail lines, and then visit Sognefjord, Norway’s longest and deepest fjord. The journey wraps up with a free day in Bergen before heading back to Oslo through some of western Norway’s most remote regions. 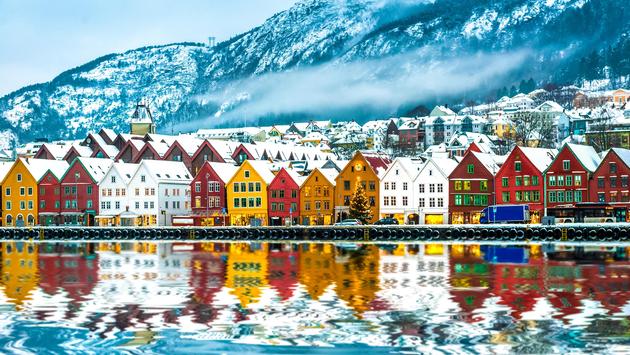 Arctic Norway & Midnight Sun on the Lofoten Isles – Starting at $4,215

This twelve-day trip begins in Oslo, where guests will take a guided tour of the Norwegian capital before riding the rails to the harbor city of Bergen, surrounded by seven mountains and known for its Klosteret neighborhood, which is filled with 18th-century wooden houses.

The Bergen Railroad then leads through rugged mountains, passing by deep fjords and rock tunnels, before passengers switch over to the Flam Railroad, one of the world’s steepest railways that overlooks stunning scenery like waterfalls, snow-capped peaks and country farms. Alighting along the banks of Aurlandsfjord for the evening, guest will enjoy a Viking-style feast at the traditional Norse establishment, Aegir Brewery.

Afterward, guests are headed to Southern Norway, stopping in Geiranger and exploring the UNESCO site of Geirangerfjord by boat, taking in views of the extraordinary Seven Sisters and Suitor waterfalls, towering cliffsides, sparkling azure waters and lush sylvan landscape.

The next several days take passengers along a serpentine mountain road to see Andalsnes, then the thousand-year-old city of Trondheim, and through the varied terrain of northern Norway, passing over the Arctic Circle to Lonsdal. The final leg of the journey uses the Nordland Railroad, also known as the Polar Express, which passes by clear blue lakes, sparkling fjords and the Svartisen Glacier.

The last few days are spent exploring the Lofoten archipelago, islands that are tethered to mainland Norway by a series of bridges and are filled with quaint fishing villages. In the summer season, these top-of-the-world Arctic outposts also offer perfect places to view the Midnight Sun.

The medieval castle near Rome that’s now a hostel