I was beginning to lose hope I’d ever find the Algonquin Eco-Lodge. It was as dark as a coal mine on the thickly wooded trail, the temperature around -25C. A sign about 15 minutes back said it was a 2.5km walk from the parking lot. There had been a few forks in the path and now I thought I might have taken a wrong turn. My phone had no signal – par for the course in Ontario’s Algonquin Provincial Park, thousands of square kilometres of wilderness 234km south-west of Ottawa and 18km from the nearest town. Fortunately, I was dressed for the occasion — ski pants over long underwear, thermal socks, proper winter boots, and several layers under my jacket.

Another five minutes of walking and still no lights. I called out again, anxiously. Nothing. I continued on my way, talking aloud to myself as I trudged along – telling any passing wolves or bears to please stay clear. Then, up a short rise, there it was! A beacon of light in the winter darkness.

Algonquin Eco-Lodge is a ramshackle cabin built in the 1970s, its rustic wood-panelled walls adorned with vintage skis and other cottage paraphernalia, and fitted with a woodburning stove, two shared bathrooms, and a micro hydro generator powered by the river. During the three days I spent here, the generator, engineered by wilderness guide and lodge owner Robin Banerjee, produced electricity, but little in the way of heat, leaving me and the 26 other guests constantly vying for spots in front of the stove and permanently attired in slippers, thick socks, big sweaters and long underwear. 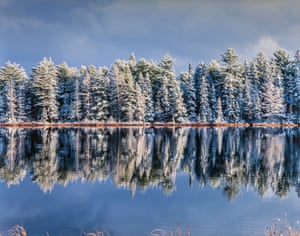 It was my first visit to the lodge, the only accommodation open in winter in the park, but several of the other guests were repeat customers, returning year after year to enjoy winter sports, camaraderie, and the annual New Year’s Eve celebrations.

The day before New Year’s Eve, after a breakfast of pancakes, toast and fruit, everyone wrapped themselves in parkas and ski pants to head outside. Some went snowshoeing on the dedicated trails while others opted for cross-country skiing on the 60-odd kilometres of groomed pistes.

I was hoping to track and photograph wildlife, so I went walking with Rick, a canoe guide and survival hunter. The irony of a vegan animal-lover tracking animals with a hunter wasn’t lost on either of us. We headed down to the “deer highway”, where a motion-activated camera records passing animals – mostly deer, and the wolves that hunt them. I felt a frisson of fear when I realised that I had walked right by here on my way in the night before. Along the way, Rick pointed out how the deeper, larger paw prints were those of a wolf while the smaller, closer together ones had been made by foxes, stoats or pine martens. 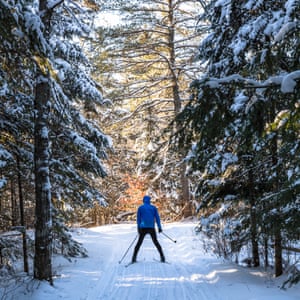 Shortly before sunset we drove to the park’s Mew Lake campground. As an urban Canadian from Montreal, I was amazed to discover that there exists an entire subculture of winter campers. A festive atmosphere hung in the air as they bustled about unpacking and organising their rented yurts, playing hockey on the outdoor rink or stood wrapped up like the Michelin Man warming themselves around campfires. With the light taking on an otherworldly peachy-rose hue, I chatted with Christina, a blogger who makes her own canvas tents. “It’s not that cold,” she insisted, “when you’re inside with the stove burning.” 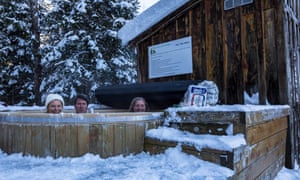 On New Year’s Eve, I headed down to the deer highway on my own with my camera, and ran into a group of fellow lodgers guzzling wine and beer, and “warming up”, Finnish-style, in the carbon-neutral hot tub. Robin, meanwhile, was cutting a hole in the frozen pond with a chainsaw for the annual Polar Bear Dip. Only one person was deranged enough to participate. The air was like crystal, so crisp and hardened by the cold it felt as if it would shatter. 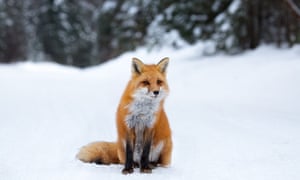 Back at the lodge, after a belly-warming curry, small groups gathered in the lounge to drink beer, wine and spirits brought from home, and a thirtysomething hipster took out his antique banjo and played country tunes. Just before midnight we ventured outside, flasks at the ready, and gathered round the bonfire, mesmerised by the flames. At the stroke of midnight, Robin set off the first of the fireworks over the lake. Pinks, purples and greens flashed so loud and bright I worried the animals I’d hoped to find would drop dead from fright.

On New Year’s Day, the trail seemed shorter and much less threatening than it had on the way in. But once I hit the deer highway, I heard rustlings all around then, behind me, a snort and the snapping of twigs. I turned.

“Hello,” I whispered. “Anyone there?

How to get there: Algonquin Eco-Lodge is in the south-east corner of the park, 18km outside the town of Maynooth. It’s 266km (three hours) north-east of Toronto. Greyhound buses run to Maynooth on the Pembroke-Peterborough route. Robin or one of the others will pick guests up in Maynooth.
Meals: All meals are included in the nightly rate, but guests must bring their own alcoholic drinks. Trevor cooks tasty vegan and vegetarian options.
Winter rates: £82pppn plus taxes, 5% gratuity extra (summer rates: £99pppn plus taxes). Snowshoeing weekends (three days, two nights) £186. There are 12 basic double rooms in the main lodge and two more in a lakeside cabin. The lodge is open from 29 December to 1 January, then closes for a month before reopening on 1 February.

PODCAST: The Value of Travel Agents on Full Display