Ireland has some extraordinarily beautiful beaches: Derrynane in Kerry and Connemara’s Glassilaun easily hold their own against Caribbean counterparts. Unfortunately, the country’s weather can rarely do the same, often making a trip to the coast a damp proposition. However, rather than escaping the harshness of the climate with a visit to warmer climes, a new generation of Irish people are embracing their cold seas – but doing it from the vantage point of mobile saunas and seaweed-filled whiskey barrels parked on the shore.

This Scandinavian-inspired solution to an Irish problem is reimagining the country’s beaches, where summer water temperatures peak at around 15C. The renewed popularity of traditional year-round sea swimming at Dublin’s Forty Foot and Galway’s Blackrock Diving Tower has inspired dozens of new swimming communities across the country, including Rise & Swim in Cork and Dublin Sea Swimming. 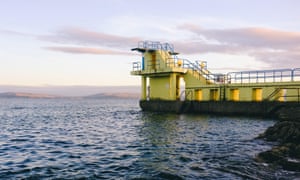 Instagramming your latest sea swim in freezing conditions has almost become something of a cliche but not even social media over-sharing can dampen the euphoric effect of the ocean on the soul. Ireland’s relationship with the sea wasn’t always so rosy: historically, west-coast fishermen rarely learned to swim, and fish was considered a penance to be eaten only on Fridays. But despite its notorious lack of sunshine, communing with the sea in Ireland is never been more popular, as the emergence of these hotspots proves. 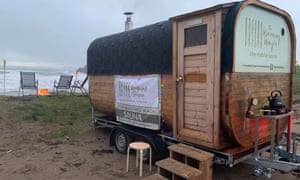 Designed in Cork and built in Finland, this glass-fronted sauna pops up regularly at sunrise and sunset on intimate Inch Beach south-east of Cork city. Race into the Celtic Sea once the sauna temperature becomes unbearable and then return for another essential oil-infused session inside. Share swimming spot tips with other sauna-goers while the owner and his kids cook pizzas in a portable oven – to be eaten around a firepit at the edge of the beach. Indian head massages are on offer in a nearby caravan. Stay overnight in a yurt at the charming Inch Hideaway, less than a kilometre away.
• Follow @the_warming_wagon on Instagram and Facebook for details of its upcoming weekend schedules; €20 for an hour-long session, book in advance. Runs year-round 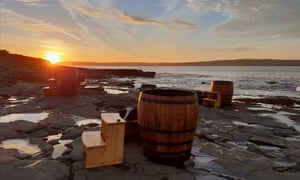 Seaweed baths have long been a feature of Irish seaside towns, including Enniscrone and Ballybunion, and now a mobile version of this classic spa experience tours around piers and beaches of West Cork and the Wild Atlantic Way. A dozen Irish whiskey barrels filled to the brim with organic seaweed and piping hot sea water are lined up at the water’s edge – allowing for an instant warm up after a cooling dip in the Atlantic. Lose yourself in the sweeping vistas while soaking up the iodine and essential minerals released by the hot seaweed.
• €35pp, €50 for two sharing, under 16s free with a parent. Locations announced on social media on Wednesdays; booking advised, wildatlanticseaweedbaths.com. Accommodation tip: Wild Atlantic Cabin (on Airbnb from €70) is convenient for the baths’ County Clare location 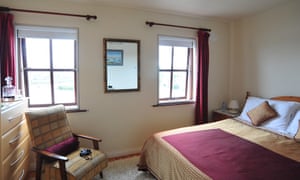 Local artist Victoria McCormack leads her guests to Salthill for meditation on the beach lit by the rising sun. Victoria places rose oil in each person’s hand to be brought into the sea as a gift, followed by an active meditation focusing on the healing force of the ocean. Hot hawthorn tea, blankets and hot water bottles greet your return to the shore. If you haven’t had enough of cold water, follow the promenade west to Blackrock Diving Tower where locals swim in all conditions.
• Swim & Ritual costs €36 through Airbnb. For lunch try Achill Island smoked mackerel sushi rolls (€5) at Wa Café near Galway’s docks. Doubles at The Heron’s Rest on the Longwalk from €159 B&B 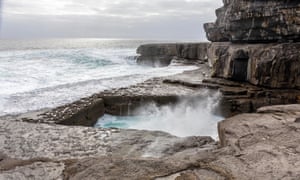 Arguably Ireland’s most unique place to swim, Poll na bPéist on Inis Mór (the largest of the Aran Islands) takes the form of a rectangular natural basin created by the erosion a granite plateau below the island’s towering cliffs. This amazing quirk of nature hosts the Red Bull Cliff Diving Championships every summer but wild swimmers can have the pool to themselves at high tide for the rest of the year. While on Inis Mór, look for Aran Islands Seaweed Pesto in the isle’s only grocery shop – or track it down in supermarkets throughout Ireland. Take the ferry to the next island, Inis Meáin, and dodge the Arctic terns at its main beach, which you’ll (most likely) have to yourself. Then, warm up after your solitary swim in the sauna-and-steam shower at An Dún B&B (doubles from €103) 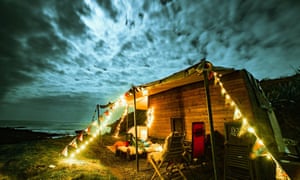 Shirley Fitzpatrick has been bringing Scandinavian-style sweating to the masses for several years now. Her wood-fired sauna is fashioned from a converted horsebox, which at weekends she tows to some of Ireland’s best swimming spots, including Glengarriff’s Blue Pool and Garretstown Beach in Cork and Fenit Beach in Kerry (as well as the Avonbeg River in Wicklow, south of Dublin). Relax afterwards with a cup of herbal tea brewed by Shirley on the sauna’s fire and amid the tented seating area extending around the sauna.
• Follow Bosca Beatha for updates about the sauna’s timetable and current location. Available year-round, no booking required, €12 a session 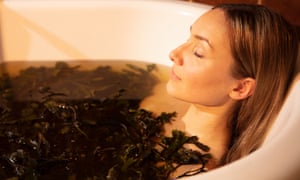 Stock up on organic seaweed toiletries at Voya in Strandhill, County Sligo, while waiting for your seaweed bath (with seaweed harvested from the Atlantic coast) to fill in its adjoining spa. Maybe cool down with a surf lesson across the road at the Strandhill Surf School. Grab a coffee at Shells Cafe next door and huddle up with a blanket on its outdoor benches. Murphy’s Cottage (from €124, sleeps 8) in south Sligo is only steps away from the sea and is almost next door to the thatched Beach Bar.
• Seaweed bath and steam (50 mins) from €28, voyaseaweedbaths.com 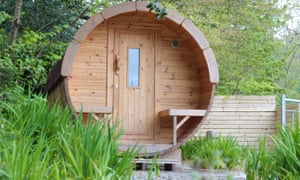 Seaview House Hotel overlooks the ocean in West Cork’s Ballylickey. The hotel has recently opened a bathhouse and spa in its garden. Start each session in its Russian-cedar steam barrels to open up your pores and render your skin more receptive to the minerals and iodine released in the adjoining seaweed bath. An outdoor hot tub and sauna awaits outside. Dive off nearby Snave and Zetland Piers and take the ferry out to Whiddy Island for a visit to one of the island’s several beaches.
• Seaweed baths from €40; doubles from €130 B&B, seaviewhousehotel.com

Dancing with wolves (nearby): a wild New Year’s Eve in Canada