Like many tourists in Naples, I have only ever been there en route to somewhere else. For years the city has had a reputation for being dirty, dangerous and traffic-choked: why on earth would anyone choose to linger? But this has changed. Naples is becoming a destination in its own right, thanks in part to the huge popularity of the enigmatic author Elena Ferrante. And with the city’s rubbish-collection problem solved and new traffic restrictions in the centre, it is looking in better shape than it has done for decades.

Ferrante, who writes under a pseudonym, is the most important literary sensation to have emerged from Italy in a generation. Her quartet of Neapolitan Novels has sold more than 5.5 million copies worldwide. The New York Times observed that enthusiasm for the novels is so intense that it is being described in “epidemiological terms, making the phenomenon sound almost like an infectious disease”. Nor is Ferrante fever likely to cool any time soon: an Italian/American television adaptation of the first book My Brilliant Friend is under way. Filming starts in Naples next spring. The ultimate aim is to adapt all four novels over 32 episodes. 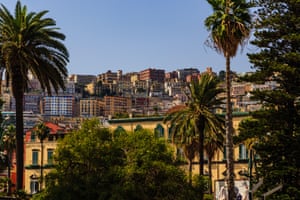 I came late to the books, prompted to pick up the first volume by the outrage around Italian reporter Claudio Gatti’s controversial unmasking of Ferrante’s supposed true identity. Needless to say, I loved My Brilliant Friend and devoured the next three, gripped by Ferrante’s rich portrait of the hard lives and intense friendship of the two protagonists – Elena and Raffaella (who call each other Lenù and Lila) – who grow up in a poor, violent neighbourhood against a background of mafia vendettas and social and political unrest in the 1960s and 70s.

Naples is as much a character in Ferrante’s writing as Lenù and Lila themselves. Her “dark streets full of dangers, unregulated traffic, broken pavements, giant puddles … clogged sewers” work their way deep into your imagination. So you finish the Neapolitan novels not only with a sigh of regret, but an insistent desire to get to know the city for yourself.

“People began asking hotels and tour operators in the area: ‘How can we find the locations in the novels?’” says Caterina dei Vivo of Progetto Museo, a Naples-based cultural heritage preservation group. “They wanted to see the stradone, the Vomero, the Rettifilo, the Corso Umberto.” Progetto Museo quickly launched a Ferrante tour of the city earlier this year and several others have jumped on board since then. 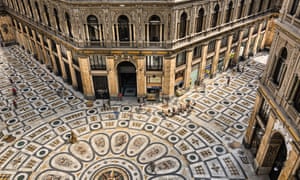 I decided to combine my tour with a few nights in Sorrento. A picturesque tumble of dark red villas and ochre hotels perched on the edge of the Bay of Naples, the town works as a base not only for visits to the city – about 50 minutes away by boat, or an hour by train – but for the Amalfi coastal path (the “pathway of the gods”), Campania’s hillside towns and the islands of Capri and Ischia, too. Pompeii and Heculaneum are an easy train ride away.

I was met off the boat from Sorrento by the impressively qualified Caterina, a Neapolitan with a PhD in the preservation of cultural heritage. Along with the two others in our group, I was keen to visit the working-class neighbourhood where Lenù and Lila grow up: the Rione Luzzatti in the south of the city. Frustratingly, Caterina won’t take us there. Now mainly social housing, it has a reputation for crime and is apparently “too sad and depressing” for us. Instead, we set off into the old city where our first stop was Corso Umberto, known locally as the Rettifilo. This is the main street connecting the rione [administrative district] with the city, where Lenù and Lila first start going out alone with friends – with disastrous consequences one night when the Solara brothers pick a vicious fight with some obnoxious private school boys. It is also home to the bridal shops visited by 16-year-old Lila as she prepared for her lavish wedding to Stefano Carracci. Every window is awash with frothy white lace and rainbow-coloured bridesmaids’ dresses. 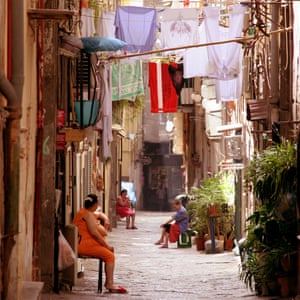 We turn left into the university district where Lenù found her first job in a bookshop and Nino, the love of her life, worked as a leftwing lecturer. As in the books, the lecture theatres are daubed with radical slogans – a “lotta dura” [a 60s political slogan, now more associated with football] here, a hammer and sickle there and students hand out revolutionary flyers to passersby. Next stop is Via dei Tribunale, where Lenù attended political meetings with her friends in the Red Brigades. We stop at a traditional pastry shop like the one run by the Solara brothers in the novels for a coffee and a sfogliatella, a shell-shaped pastry which originated in Naples, filled with vanilla, cinnamon and orange-flavoured ricotta.

Naples: what to see, plus the best restaurants, bars and hotels

The city centre feels wonderfully unmodernised, its dark, narrow streets dripping with faded laundry, lucky bunches of dried red chillies outside every house and shop front. Walls are buried beneath layers of posters, stickers, graffiti and grime. Scooters zoom past, horns blare and truck brakes hiss. I’m struck by the absence of chains, such as Starbucks and McDonald’s. Caterina says the multinationals know they cannot compete with the street food of Naples: fried pizza, potato croquettes, courgette flowers in batter, fried anchovies and fried mozzarella are sold on every corner in brown paper cones – cuoppo – for just a few euros apiece. Pungent Neapolitan coffee likewise.

East of the dead-straight Spaccanapoli which bisects the city centre, giving away its Roman heritage, the streets widen out and the Via Toledo, one of the city’s main shopping streets, leads us out of old Naples. This is where the Solara brothers paraded in their Fiat 1100 during the evening passeggiata in My Brilliant Friend. It runs past the elegant glass dome of the 19th-century Galleria Umberto – where Tom Ripley and Dickie Greenleaf strolled in The Talented Mr Ripley – into the Piazza Trieste e Trento, home of the San Carlo opera house and the Gran Caffè Gambrinus, a Naples institution founded in 1860, which Lenù and her daughters visit with Gigliola in The Story of The Lost Child. The imposing national library, where she researched the city’s history towards the end of the book, is in the same piazza. 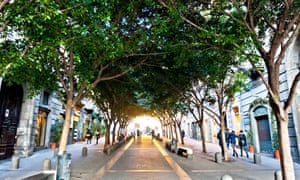 From there it is a short walk along the well-heeled Via Chiaia to the elegant Piazza dei Martiri, home to the Solara brothers’ shoe shop, where Lila hung a giant, disfigured wedding photograph of herself in her wedding gown and later conducted an affair with Nino. Staring into the windows of the handsome Salvatore Ferragamo store, you can imagine seeing Lila behind the till, or maybe it’s Alfonso, her closeted gay friend. The city opens up here to the sea and you become aware that you haven’t glimpsed the Mediterranean since morning. As Lenù often reflects, Old Naples keeps its back to the water, brooding and looking inward.

From the Villa Comunale, one of the city’s few green spaces, you can gaze towards Via Tasso, where Lenù rented an apartment while she was with Nino, and also fashionable Vomero, where a teenage Lenù attended an elegant party thrown by her professor and was amazed by her first insight into another, bourgeois world.

We returned to Sorrento exhilarated and completely sold on the concept of getting to know a new place through its literary characters. Where next? Dave Eggers’s San Francisco? Marlon James’s Jamaica? Elizabeth Strout’s Maine? The possibilities are endless.

Three places to stay in Naples

B&B Orsini 46
Upmarket B&B within walking distance of the Bay of Naples. Choose from three luxurious rooms – two with sweeping views of the sea. Gabriele and Manuela are on hand with insider tips on bars, restaurants and the best gelato in town.
Doubles from £70 per night, orsini46.it

Portalba Relais
Slick and modern B&B with six rooms overlooking Piazza Dante, a large and elegant square. Close to the Duomo and the shopping temptations of nearby Via Toledo. Each room has a large Jacuzzi, and breakfast is served in your room.
Doubles from £60 per night, portalbarelais.com

Hotel Piazza Bellini
Located in a 16th-century palace in the heart of Naples, this bright and modern hotel has 48 rooms. Relax in the attractive courtyard below, complete with crumbling statues, sofas and armchairs.
Doubles from £88 per night, hotelpiazzabellini.com

Classic Collection Holidays offers three nights from £985 per person at Grand Hotel Excelsior Vittoria in Sorrento, based on two sharing a classic room on a B&B basis, including return flights and private transfers. The hotel has been owned and operated by the Fiorentino family since 1834 and will book your place on a Ferrante tour of Naples with a guide for €250

20 of the best pubs in Ireland: readers’ tips

Disneyland Visitor Contracts Measles, May Have Infected Others

10 of the best delis for traditional food and Christmas treats

Natural wonders under threat around the world

You Can Swim With Whales Under the Midnight Sun Thanks to This Epic New Tour in Iceland
We and our partners use cookies on this site to improve our service, perform analytics, personalize advertising, measure advertising performance, and remember website preferences.Ok