Mountains higher than the Alps, sub-tropical forests along its Black Sea coast and even a patch of semi-desert on the south-east border … for a country a little smaller than Ireland, Georgia packs in a serious amount of geography. Add interesting cuisine, the world’s oldest wine-making industry and the fascinating cultural and architectural baggage created by a history of invasions, and you have a destination for a huge range of appetites. It’s cheap, too, compared with western Europe or the US – though no longer undiscovered. But get out of the capital, Tbilisi, and you can easily leave the tourists behind. Highlights include the view of Mount Ushba, known as the Matterhorn of the Caucasus, and the bulk of Mount Kazbegi, an extinct volcano.

Tbilisi is the obvious, though not the only,starting point. The old city is a jigsaw of sights and architectural styles, telling Georgia’s story of invasion and survival, interspersed with countless restaurants and cafes. Don’t miss the nearby “Dry Bridge” flea market, where Georgia’s Soviet past is on sale.Try Zakhar Zakharich restaurant under the bridge for their excellent khinkali. To learn more about Georgian food, book a tour with Culinary Backstreets. There’s great nightlife, too, in the bars of Shardeni and in clubs such as Khidi, Bassiani and Bauhaus.

From Tbilisi take an early morning minibus from Isani bus station to Kvemo Alvani (2 hours). Then find a space in a 4WD to Omalo (5 hours), to start the 4-5 day trek through the Tusheti mountains to Shatili. The route passes through traditional villages guarded by stone towers. Stay in Omalo at the Hostel Tishe (£11pp B&B, +995 599 90 53 37, no website) or walk to Dartlo and camp. 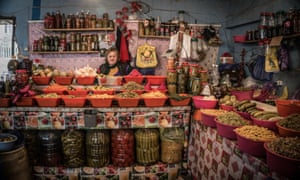 The road to Omalo is only open from June to October. Bring your passport as it will be checked by border guards – the Russian border is nearby. Trekking company Caucasus Nomad can organise everything and provide a guide. It offers a custom week-long trekking trip for £1,570pp (for two people, less for larger groups).

Find a driver in Shatili to take you to Roshka, for the hike through “the Georgian Dolomites” over the 3,430-metre Chaukhi Pass to Juta. The route is only passable from late June to September. Camp at Abudelauri lakes for the hike up to Chaukhi Pass and down to Juta. The trail downpasses the Fifth Season hostel, though I’ve had better experiences at Camp Zeta (bunk room £12 a night, or tent pitch £5).

From Juta take a minibus to Stepantsminda, the starting point for the spectacular 5,033m Mount Kazbegi, an extinct volcano that towers above the landscape. There are manytreks in the area. A one-day hike to the Gergeti Trinity church finishes at the new Swiss-style Altihut (from £40 a night B&B) at 3,100 metres, which has a panoramic view of Kazbegi.

Climbing Kazbegi is a minimum three-day round trip depending on the weather. It’s possible to hire gear and a guide in Stepantsminda through Mountain Freaks; Caucasus Nomad (as above) can also organise the trip. Acclimatise by staying the first night at the Altihut (altihut.ge), before climbing to the Betlemi hut at 3,653 metres the next day (it’s a converted Soviet weather station) – ready for a middle-of-the-night push for the summit. There are many more treks in the area, including the Truso valley with its geysers. 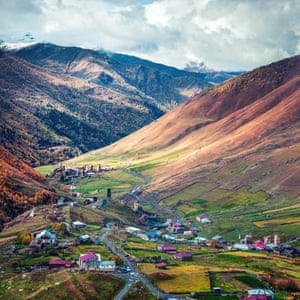 Return to Tbilisi by minibus for a rest and restock before travelling on to Mestia in Svaneti, for the multi-day trek (typically 4-5 days) to Ushguli, one of the highest continuously inhabited settlements in Europe, in the heart of the Greater Caucasus mountains. Either take the day or night train to Zugdidi (£5, 8 hours ) and then a minibus from there to Mestia (£3, 1 hour). Or minibus all the way from Tbilisi central station (£10, 8 hours). Vanilla Sky airlines flies daily (except Saturdays) from Natakhtari airport just outside of Tbilisi for £27 one-way. The popular Teo Guesthouse in Mestia offers rooms or tent space (+995 595 90 93 47, twin room £23 B&B).

The Black Sea beach resort of Batumi (4 hours from Mestia via Zugdidi) gets mixed reviews, but after all that walking a dip in the sea will feel good, and Batumi’s vast botanical garden, filled with sub-tropical plants and trees, is well worth a visit. Stay at the centrally located apartment rooms of Carpe Diem (doubles from £12).

From Batumi take a taxi to Mtirala national park (1¼ hours), to experience the sub-tropical forests of Georgia’s Black Sea coast. The Mtirala guesthouse on the park’s edge has doubles from £10 a night B&B. There are two-day guided trips into the interior, with a chance of spotting brown bears.

Alternative routes: use the city of Kutaisi in western Georgia as your exit point (Wizzair flies to London Luton and many other European cities). This gives an option of a trip to the limestone canyons of Martvili. Take a minibus to Kutaisi (£3, 2 hours), and a second minibus to Martvili from the main bus station (£1.50, 1-1½ hours). You can also fly in and out from Kutaisi, reworking the itinerary as necessary.

Minibuses, known as marshrutkas, are the cheapest way to get around. Tbilisi has several major bus stations depending on which direction you’re heading. The train service is improving but only runs east-west. There is one regular train service linking Tbilisi with the Black Sea coast, which takes about six hours to reach the main city of Batumi (£25 first class, £15 standard).

You can also hire drivers: for a 4WD from Tbilisi to Omalo (4½ hours), with room for 6-7, expect to pay around £200. The road from Kvemo Alvani to Omalo is not for the faint-hearted. Only go with a driver with a 4WD. You can find drivers in Tbilisi who will do a round trip for £60pp. 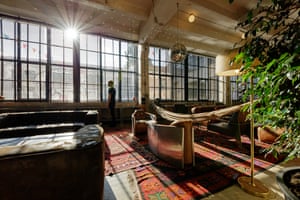 There’s a huge range of options in Tbilisi, from rooms and apartments on Airbnb, to guesthouses and hotels. The ultra-hip Fabrika hostel, housed in a former Soviet factory, epitomises the capital’s current creative boom (dorm beds for £15 B&B and doubles from £46).

Outside the capital, the budget option is for homestays or guesthouses, with most of them now posting on booking sites such as Airbnb, Booking.com or Hostelworld. You can also ask around once you reach a village. Homestays and guesthouses start from around £7 B&B; evening meals extra.

The Betlemi hut, used as the base camp for climbing Mount Kazbegi, is in a stunning position, overlooking a giant glacier. But sad to say, it is increasingly overrun by trekkers and climbers and littered with the waste they leave behind.

Although some trekking routes are becoming increasingly popular, there are still vast areas of mountain country that barely see any visitors. Places to explore off the beaten track include trails in the Racha region, which also holds many caves, the upper reaches of Martvili canyon in Samegrelo, and the sub-tropical, forested hills of Adjara along the Black Sea coast, including Mtirala national park.

Women are supposed to keep their distance from the Pagan sacrificial stone altars on the Tusheti trek. Learn some basic Georgian – it’s a tough language but people will appreciate the effort. Failing that, it’s more polite to try English first, rather than do what many visitors do and assume everyone speaks Russian.

If you eat or drink one thing 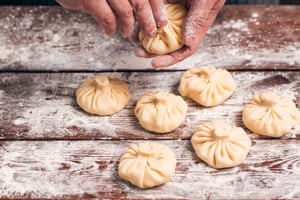 From Batumi, it’s about a 30-minute drive to the Turkish border, and a further 2½ hours to the city of Trabzon. Or head south from Tbilisi and the Armenian border is about 90 minutes away, then a further four hours to the capital Yerevan.

Read
Bread and Ashes: A Walk Through the Mountains of Georgia by Tony Anderson, who hiked through Georgia in the late 1990s. The book highlights how the mountains have defined and helped preserve Georgian culture in the face of constant invasions and meddling by its larger neighbours.

Georgia on Instagram
Follow @transcaucasiantrail for stories on the building of the nascent Transcaucasian trail, an epic project to create two 1,500 hiking routes across the region.

Blog
Among a growing number of sites offering trekking information, Caucasus Trekking is one of the most comprehensive.