“One of the pleasantest things in the world is going a journey,” wrote the essayist, William Hazlitt, “but I like to go by myself.”

Hazlitt was 19 when he first met Samuel Taylor Coleridge, in January 1798. The poet was impressed by the earnest youth and invited him to visit Nether Stowey in Somerset, where he was working with William Wordsworth on what would become the Lyrical Ballads, the founding text of English Romanticism.

In preparation for this illustrious visit, the young Hazlitt decided to initiate himself “in the mysteries of natural scenery” and set off, on his 20th birthday (April 10th) to walk around the picturesque Vale of Llangollen. As he walked, he declaimed lines from Coleridge’s Ode on the Departing Year:

“That valley was to me (in a manner) the cradle of a new existence,” he wrote later. “How proud, how glad I was, to walk along the high road that commanded the delicious prospect, repeating the lines which I have just quoted from Mr Coleridge’s poems!”

This 21-mile circular route follows Hazlitt’s footsteps around Llangollen, and is dotted with scenic “ruins, aqueducts, [and] pictures”. I walked it over two days with my 1970 Penguin edition of his Selected Writings for company: I started and finished at Chirk railway station and stayed overnight at Llangollen.

A few yards west of the Chirk station, drop down to the canal towpath and walk away from Chirk Tunnel through soaring beech woods. The Llangollen Canal is the most popular cruising canal in the country, with puttering narrowboats nosing along at less than walking pace.

Pass Chirk Marina on the left and creep through the Whitehouses Tunnel. When the canal curves left you’ll start to glimpse the valley far below, as you approach the Pontcysyllte Aqueduct. 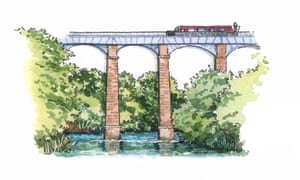 This extraordinary structure was under construction when Hazlitt walked past in 1798. At 38 metres, it is now the highest navigable aqueduct in the world, and the oldest in Britain.

It was designed by the engineer Thomas Telford as part of the Ellesmere Canal, an ambitious project to connect the River Severn at Shrewsbury with the River Mersey at Ellesmere Port. The scheme was abandoned soon after the aqueduct was completed, but Telford’s feat of engineering is nonetheless staggering: his canal drops a mere 50 centimetres over the course of 11 miles.

To honour his achievement, the entire area was declared a world heritage site in 2009.

On the far side, cross the winding hole over the footbridge and follow the branch canal west, towards Llangollen. Keep to the righthand side of the canal and, beside the second bridge, turn right on to the Offa’s Dyke Path.

The path squeezes beneath a dismantled railway line, and wiggles away from the village of Trevor before heading up through the atmospheric pine woods surrounding the 18th-century Trevor Hall.

After a long, well signposted climb between the trees, you burst into the open and there’s a spectacular view, with the dramatic Castell Dinas Brân directly ahead.

“You come all at once upon the valley,” wrote Hazlitt, “which opens like an amphitheatre, broad, barren hills rising in majestic state on either side.”

Follow the road towards the castle, with the sheer Eglwyseg escarpment to the right, until you can turn left and follow the steep steps up to the ruins. 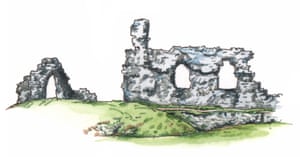 Known locally as Crow Castle, this once mighty palace was built in the 1260s by Gruffudd II ap Madoc, Prince of Powys Fadog (Lower Powys), on the site of an iron age hill fort. It survived only a few years: in 1277 it was besieged by the English and the castle’s Welsh defenders burned it to the ground before fleeing. Brân, which means ‘“crow”, is the name of a giant of Welsh legend: Brân the Blessed was a supernatural prince, whose decapitated, talking head is said to have protected the realm from invasion. He is the Fisher King of Arthurian legend, and Dinas Brân may be the location of Castle Corbenic, home of the Holy Grail.

Descend on the other side of the hill and follow the path until you get to a three-way signpost. Here there is a choice: turn left and shortcut straight to Llangollen, or right along a path that skirts the edge of the hill.

Follow this path as it drops past a wooden crow and take the left turn signed to Dinbren. Turn right when you hit the road and right again on the road signed to World’s End. Turn immediately left on to the Clwydian Way.

After passing some rudimentary red seats this pleasant grassy path slopes down to a signpost. Turn hard left, signed to Valley Crucis Abbey.

Follow the path across a large open field, looking out for an almost invisible right-hand turning, over a metal stile, signed to Velvet Hill.

Take this precipitous path until it reaches a road. Here it’s worth a short detour right to inspect the Pillar of Eliseg. 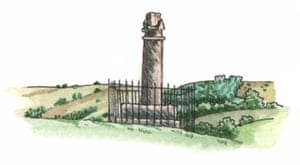 This weathered stump, which has stood here for more than a thousand years, was once the shaft of a great Celtic cross. It was set up by Cyngen ap Cadell, Prince of Powys, in the ninth century, in honour of his great grandfather Elisedd ap Gwylog. The inscription, now impossible to read, traces their royal bloodline back to the Roman emperor Magnus Maximus. The cross gave its name to Valle Crucis Abbey nearby, founded in 1201. This thriving Cistercian community was one of the first to be dissolved in the 16th century, but its crumbling walls are still open to visitors.

Retrace your steps and cross the stile on to the slopes of Velvet Hill. Follow the steep path through the bracken and straight up a grassy track. Stop for a breather and admire the view of Valle Crucis Abbey.

Arrive at a velvety sward of rabbit-nibbled grass, with vistas of the Llantysilio Mountains to the west and back to Castell Dinas Brân. Turn left and follow the knobbly ridge and descend to the sparkling River Dee.

When the path emerges on to a road, follow the turning signed to Corwen, then take a left-hand footpath down to the canal.

You reach the towpath behind the Chainbridge Hotel. Here it is worth a short detour right to see the famous Horseshoe Falls. 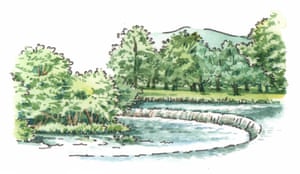 This elegant weir was designed by Telford, to create a pool that feeds the canal system, and it now serves another function, because the canal supplies fresh drinking water to the area around Nantwich. Hazlitt might well of visited this idyllic spot, before the weir was installed.

“I turn to thee in thought, O sylvan Dee,” he wrote; “[. . .] thou shalt always be to me the river of Paradise, where I will drink of the waters of life freely!”

Return the same way and pop along the hotel terrace to see the chain bridge. This was the brainchild of a local entrepreneur called Exuperius Pickering, who used it to avoid paying tolls.

Take the path before the Wharf Tea Room, which leads down to Llangollen Bridge, one of the Seven Wonders of Wales, and the centre of the town.

“How fine it is,” writes Hazlitt, “to enter some old town, walled and turreted, just at the approach of night-fall.” 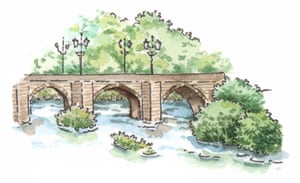 Llangollen is a charming market town, set in the nook of the valley. It is named after St Collen of Glastonbury, a seventh-century monk who established a settlement there. When Hazlitt visited, he spent the evening reading a novel by Jean-Jacques Rousseau “over a bottle of sherry and a cold chicken”.

I recommend staying at Gales Hotel and Wine Bar on Bridge Street (doubles £85), an establishment that Hazlitt knew as the Lion Inn. While you eat, why not read extracts from Rousseau’s Reveries of a Solitary Walker?

In the morning, walk up Castle Street and take the left-hand branch of Hill Street, which weaves southeast towards Plas Newydd. 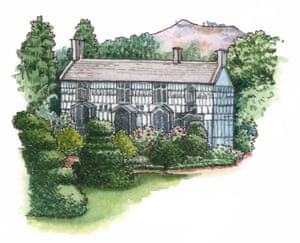 This eccentric, half-timbered, chocolate box of a house was once home to the “Ladies of Llangollen”. Lady Eleanor Charlotte Butler and Sarah Ponsonby were young Irish women who defied their aristocratic families by running away and setting up home together in Llangollen in 1780, where they lived for more than 50 years.

They dressed in men’s cravats and top hats, shared a bed, covered every inch of their walls with carved oak, and became a rather unlikely tourist attraction, receiving visits from the Duke of Wellington, Sir Walter Scott, Josiah Wedgwood and many others. Hazlitt may well have visited them for tea; William Wordsworth certainly did. He wrote a sonnet about their “low-roofed Cot”, describing them as:

Sisters in love, a love allowed to climb

Even on this earth, above the reach of Time!

Leave Plas Newydd and turn right down Butlers Hill. Cross the brook and turn up Brook Street. Take an unmarked ramp on the left and curve up the steep road until you reach a footpath on the right.

Take this path and stop to examine the useful board, which maps the paths through Pen-y-Coed. Keep taking left-hand turns until you are on a broad path that descends gently beside a dry-stone wall and emerges on to a road.

Turn right along this road, passing the 19th-century Tyn Dwr Hall on your left. It curves around until it meets a crossroads.

Ignore the left-hand footpath sign and head up the rubble track straight ahead. After a strenuous climb, take the left-hand fork and follow this track as it curves around the hillside. The Vale of Llangollen gradually disappears behind as Shropshire spreads out ahead.

When the path meets a road junction, take the road straight ahead and follow it down through woodland to a T-junction, then turn left. After half a mile the road turns sharply left, but continue straight ahead, on a National Trust path that leads to Chirk Castle. 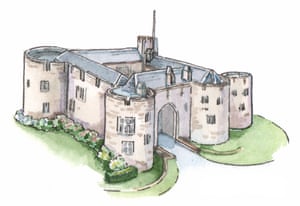 This medieval fortress was built in 1295. It guards the entrance to the Ceiriog valley and was part of a defensive line of English castles built along the Welsh Marches. Today it is owned by the National Trust, though non-members can use the permissive paths that cross the property.

The castle itself has spectacular staterooms and interior decorations that span seven centuries. One highlight is a stretch of wooden water pipe that once formed part of the New River system, masterminded by Sir Hugh Myddelton, the 1st Baronet. This municipal project brought fresh drinking water from the River Lea to London in 1613. It’s also worth walking past some well-preserved remnants of Offa’s Dyke to visit the “Oak at the Gate of the Dead”, a thousand-year-old tree that marks the site of the bloody Battle of Crogan.

Take the road that skirts the north side of the castle and, when it turns left, cross the stile directly ahead and continue past the woods on your right.

After two kissing gates, the path forks: take the left-hand option, across the field, which leads down to a road.

At this point, you could make a short detour right to see the spectacularly floriated wrought-iron gates commissioned for Chirk Castle in 1712. Either way, take the footpath almost directly over the road, which leads across a field and right, through the woods beside the canal, until you reach the north end of Chirk tunnel again.

Is There A Full Moon On Halloween 2020? What To Know About The Rare Event