‘Chocolate box” isn’t a term you’d associate with the Les Arcs ski area. Arc 1950, added in 2003, is cute and traditionally Savoyard in design but, in general, the words used to describe France’s purpose-built 1960s and 70s resorts, many constructed with little concern for their natural surroundings, are modernist, brutalist, angular. I had lumped Arc 1600, Arc 1800 and Arc 2000 into that category after my first visit some years ago. 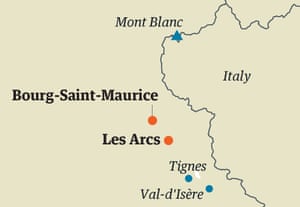 But Les Arcs is celebrating its 50th anniversary this year, so I took an architectural ski tour with local historian Jean-Marie Chevronnet to look afresh at the three original Arc villages. The first of the three, Arc 1600, was the brainchild of mountain guide Robert Blanc and entrepreneur Roger Godino, but its design really came alive when Charlotte Perriand was brought on board.

The Parisian architect and associate of Le Corbusier brought her own social vision to the project, determined to make it more affordable for the average French holidaymaker. In the centre of Arc 1600, La Cascade epitomises what Perriand set out to do from 1968 onwards.

This huge block of holiday apartments is cantilevered into the hillside, one side tilting outwards so that each floor gets the same amount of sunshine bouncing off the snow. The balconies are on the other side – again each set so that no apartment has more light than another. 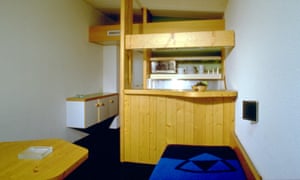 Perriand was also determined that whoever was doing the cooking – almost always the wife – wouldn’t be stuck in a closed kitchen while everyone else made merry in the sitting room. She designed more open kitchens so that everyone could be sociable while on holiday – quite a revolutionary idea at the time. And the buildings were arranged so that no apartment would be overlooked and everyone could enjoy the mountain setting.

As often happens, the reality didn’t always match. Almost straight away, some of the resort’s modestly proportioned accommodation proved a bit too poky and had to be expanded. The desirability of Perriand’s coolly minimalist furnishings waxed and waned with changing fashions, though now many of them fetch healthy prices in auction houses.

But one thing that hasn’t changed is the way many of the massive blocks in Arc 1600, Arc 1800 and Arc 2000 manage to blend into their surroundings – which was the original intention. We skied across to the top of Arc 1800, where Jean-Marie pointed out the village below. I could just about see the large half-moon shape of one building, camouflaged by snow, towering pine trees and the natural slope of the ground. Another viewpoint showed a building curving around a forest – much less obtrusive than the vast Club Med that opened last season above Arc 1600. 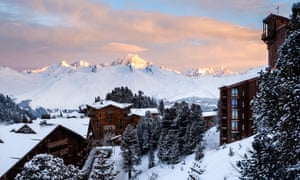 As we skied along the Traversée slope that leads back to Arc 1600, we passed an enchanting series of A-frame wooden cottages in the woods. Called Chalets Pointus, they were workers’ accommodation for the people who built Arc 1600 and, like many former workers’ cottages around the world, they’ve been turned into rather expensive holiday lets. Probably not what the egalitarian Perriand had in mind.

I had previously only had a hazy knowledge of Les Arcs’ full history and wasn’t a massive fan of modernist ski resorts, but I was developing a deeper respect for the place. Any resort that banishes cars to the outskirts is fine by me, and the Les Arcs villages have always had traffic-free centres.

Direct Eurostar trains run to Bourg-Saint-Maurice in the valley below, and a funicular trundles up the mountain straight to Arc 1600. The funicular is getting a makeover, with a sleek futuristic design to be unveiled in December. 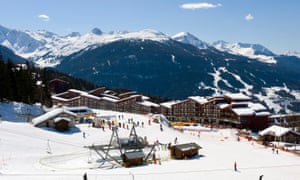 And the skiing has always been superb. Even if you don’t extend your ski pass to include neighbouring La Plagne, there’s enough in Les Arcs’ 200km ski area to keep most visitors happy. I was staying in Arc 1950, which is dismissed by fans of modernism as a bit too chocolate-box and Disneyfied. They’re welcome to their sniffiness: I liked the village’s convivial centre and range of restaurants. The Italian owner of Le Chalet de Luigi was delightfully heavy-handed with the portions of San Daniele ham brought from his native Friuli region, and the gnocchi tartiflette was a lovely Italian-French match. At La Vache Rouge, eastern and western France mingled delectably in soft cabbage leaves stuffed with duck confit.

Like the other villages, Arc 1950 has a ski-in-ski-out layout, and its chairlift took me to a varied terrain of blue and red runs winding above and below the treeline. A new addition for the 50th anniversary is a picnic viewpoint at the top of the Comborcière lift at 2,307 metres, a beautiful spot of wooden terraces, sunloungers and views of Mont Blanc. The Snowpark had me in stitches as I watched people attempt – and fail – to tackle the waterslide, a 30-metre run-up to a jump over a 15-metre pool.

All around was the same laid-back, friendly atmosphere – a resort that is, as the French say, bien dans sa peau (happy in its own skin). Even though I’m still a sucker for the chocolate-box look, I had to applaud Perriand’s humanist approach to capturing the magic of the mountains.

• The trip was provided by Erna Low, which has seven nights’ self-catering at Arc 1950 Le Village from €1,038pp, including Eurotunnel crossing. Les Arcs tourist office runs archi-ski tours for €7, and free walking tours. A Charlotte Perriand exhibition, Inventing a New World, is at Fondation Louis Vuitton in Paris until 24 February 2020 (€16 adult, under 26s €10, under 18s €5)

New Jersey restaurants: Where to go for comfort food