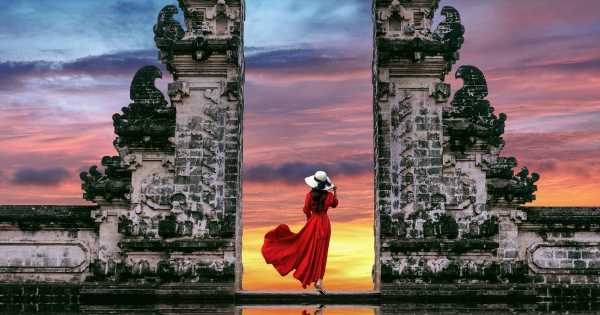 Influencers constantly give us holiday envy with their amazing travels in far-flung locations and ridiculously beautiful settings.

Of course when there's a particularly spectacular spot, it instantly becomes a hit with the Insta crowd.

The Pura Lempuyang Luhur in Bali is one of those places; influencers stand between the two stone structures dubbed the 'Gate of Heaven', posing while looking out across the horizon, their reflection visible on the crystal lake waters behind them.

Pura Lempuyang Luhur with its beautiful vistas and intricately carved stones is real, but there isn't a lake to be found near the structure.

READ MORE: How to get a flight upgrade – travel experts share 6 easy hacks

Instead, photographers achieve the effect by holding mirrors under the camera lenses and phones as they take the shot, or use nifty editing tricks to make it seem like you are posing right by the lake.

It's become infamous amongst the Instagram crowd, but that doesn't stop people from still travelling there in the hope of getting that picture-perfect shot.

The result is that most tourists rock up expecting to be able to pose by the lake. Instead they find themselves having to queue up the large staircase, to then stand on cobbled ground, no lake in sight.

Oh, and speaking of the queues; some tourists have reported having to wait for a couple of hours just to go and see the Gates.

One Tripadvisor reviewer wrote: "Beautiful temple, but the lines are long, BEWARE! We got there 30 min after it opened, and we were still #112 in line!! This temple is about a 2.5 hr drive from Ubud and is known for having the gates of heaven. You can't enter past the stairs above this pic as it's only for religious practices, but you can walk around the non-restricted areas and take pics. To visit, you must wear a sarong and cover your shoulders.'

Another said: "Best place for photos! Although do note that there is a long queue for the photos most of the time. We had waited around 45 mins for the photo shoot. However you are free to walk around the area."

Because the location has become such a hotspot, other measures are in place to deal with the crowds.

On the temple's Tripadvisor reviews, people have reported having to pay an entry fee of 50,000 IDR (approximately £2.80).

You can find out more in the Pura Lempuyang Luhur Tripadvisor reviews.