I wake in the pre-dawn light – still inky blue in the compartment. I lie there, feeling the train rock beneath me and then push up the window blind with a foot. I’m rolling through misty flatlands. The landscape spooling past. Austria.

Last night I was in Cologne. A wonderfully eccentric brass band was playing carols in the station entrance, and the gothic beast of the cathedral seemed to be listening, peering through the roof like an intrigued T-rex. 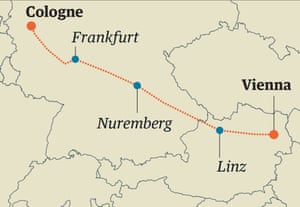 Pointy-faced ICE trains were nosing about as I waited for my sleeper. It drifted in around 9.15pm: a long purple Nightjet train pulled by a bright red locomotive, with a mix of standard seating, couchette compartments and more luxurious sleeper cars.

The train exuded excitement, mystery and warmth. Fellow passengers took pictures. “Is this a special train then?” a German man asked me. “I think so,” I said, distracted by his resemblance to Jürgen Klopp. “It’s the Vienna sleeper.”

“Ah,” he said. “You see, I forget that people get excited about such things. For me it’s just my train home.”

I mull this as I board – the apparent novelty of a night train in 2019. Only 10 years ago, they seemed an endangered species as country by European country discontinued its services — the French, the Swiss and then, finally, the Germans in 2016. Yet, only three years later, the market has turned around, and Nightjet’s owner, ÖBB – the Austrian Federal Railway that kept the faith – is reaping the rewards. The UK has two sleeper services: the GWR Night Riviera from London Paddington to Cornwall, and the Caledonian Sleeper from Euston to Scotland’s far north. But as recently as the 1980s and early 90s a nocturnal network ushered travellers from Kings Cross to Newcastle and Sunderland; Paddington to Milford Haven; Euston to Holyhead, Liverpool and Manchester; Nottingham to Glasgow; and Plymouth and Bristol to Birmingham and Edinburgh.

I ponder this lost web as I drift off, swaddled in my train’s soft concertina of sounds rippling past. I think of the driver’s view — infinite arrows of rails and light. Red, yellow, green and silver. 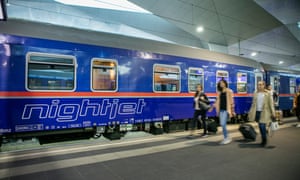 Boarding at Cologne, I made my way down the sleeper car corridor, with its numbered compartments. Many of the sleeper sections have sofa-like seats, which the carriage attendant will later fold away, lowering hinged beds from the wall – the cabins sleep three, laddered one above the other. My room was cosy and light, with a wash basin and mirror tucked in a cupboard, and a small desk that could be folded away. After filling in my tick-box selection for the next morning’s breakfast, my steward gave me a key card so I could lock my door if I wished to pad up the carriage to the shower and washroom.

My coach was a mix of families, tourists and business people. Some boarded long after I’d turned in and I felt the train slow at a half-dozen stations before I fell asleep, muzzily aware of doors banging and people whispering as they made their way past.

My bed was comfortable – firm mattress, warm duvet. Reading spotlights made the room feel super snug. The thermostat control above the door was effectual. Having an attendant a buzzer call away in case of emergency – or just the need for tea – was a happy reassurance. 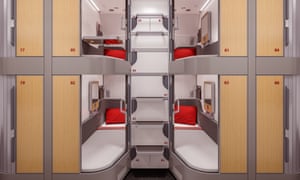 There was a welcome pack of sparkling wine soap, snacks, slippers, eye mask and ear plugs, but I slept very well unplugged. Indeed it was a thrill to stir and find the train still and ticking somewhere unknown, and then wake only a moment later to find time had slipped and, yes, we were rolling again, somewhere else now, speeding away over tracks unknown – a trance-like adventure.

The following morning I have breakfast with Bernhard Reider of ÖBB. Even though Europe has a long tradition of overnight trains, when German railway company Deutsche Bahn ceased its City Night Line sleeper operations, the Austrian company had to decide whether to stick with its existing network of eight lines, or move into the gaps left by its German rival, reinvest and refocus on the overnight market.

“And when the decision was made in 2016, it was not so clear that it would be successful,” Bernhard tells me. But the past three years have proved them right, especially the past 18 months, which have seen a dramatic change in demand.

“Before now, trains were full in the holidays – Christmas, Easter and summer,” he says. “But we always used to say, “if you want to travel in November or December on a Tuesday, you will always find spaces. That has changed completely. Now, even on those days, we are completely full in the sleeping cars.

Having started with eight lines, ÖBB’s operation now runs 27, together with its international partners. “I think it’s quite a good number!” Bernhard smiles.

Last year it started a new route from Berlin to Vienna. Next week sees the introduction of a new sleeper from Brussels to Vienna and Munich, and in December it will add a much-anticipated route from Amsterdam. It is also revamping the trains.

“We have recently invested more than €200m in 13 new Nightjet trains, which will be completely different.” Some of the current rolling stock has been in service for 30 years, he says. It’s tired. The snazzy double-decker sleeping cars running in and out of Zurich are the exception.

The design of the new trains factors in new trends and passenger expectations, particularly for privacy. At the moment the company runs a maximum of two sleeping coaches per train, but is shifting to the idea of sleeping cars as a top-end travelling hotel, with en suite compartments as standard. Formerly communal couchette cars will be upgraded to mini-suites of bijou compartments with shuttered walls that passengers can close around themselves. “They are small, but you can sleep in great privacy – nobody else will be next to you – for quite a low price.”

By the end of 2022, the new Nightjet trains will be running from Vienna to Milan, Rome and Venice. All 13 new trains will be in operation by mid 2023.

Bernhard’s passion for the project is tangible, a boyish enthusiasm that calls to mind train sets on the carpet and maps on the wall. In the early morning as my sleeper nears Vienna, I’m filled with a similar childlike delight on hearing a tap at the door announcing coffee and opening the blind to see frosted forests, farms and sleepy towns flying by. 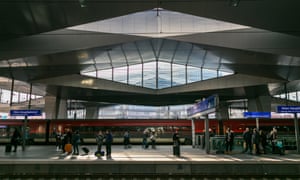 To leave from the middle of a European city and speed through the cold December night, warm, comfortable and dreaming – this is surely the future. Where short-haul flights mean hectic drudgery, schlepping out to an airport mall and a dreadful red-eye, sleeper trains shuttle you from centre to centre in 40 winks.

I love the feeling of stepping down into Vienna’s main station, soaring new and slightly vorticist in the morning sun, and walking rested and bright-eyed down the platform, bag in hand. This is seamless, simple travel, timeless and chic. At the start of a new decade, the future of the night train looks wonderfully bright.
• Sleeper train travel was provided by ÖBB; travel from London to Cologne via Brussels was provided by Rail Europe (formerly Loco2). One-way prices on the Cologne-Vienna route start at €29.90pp in seated compartment for six people; €49.90 in a couchette (sleeps six); and €69.90 in a sleeper cabin (sleeps three)

• Dan Richards is the author of Outpost: A Journey to the Wild Ends of the Earth, available at the guardianbookshop.com

Big city kicks with a country heart: an insider’s guide to Calgary