It’s no secret that elephants face a precarious future, at best.

These beautiful and highly intelligent animals are being impacted by numerous threats on a daily basis ranging from habitat loss and habitat fragmentation to being killed for their ivory.

Between 2010 and 2012 alone, an estimated 100,000 elephants in Africa were killed, the slaughter driven largely by demand for ivory in China, according to research conducted by Save the Elephants.

In addition, as humans seek to increase their food supply to meet the needs of a constantly growing population, existing elephant habitat is turned into cropland and elephants find themselves competing for resources with people.

There are also less well-known threats for these gentle giants who are known for developing immensely close family bonds, similar to humans.

For instance, throughout Southeast Asia baby elephants are separated from their mothers and subjected to an inhumane process known as phajaan, which directly translated means crushing and breaking their spirit in order to prepare them for a life of serving and entertaining tourists via elephant rides and treks or performing stunts in circuses or being paraded through the streets in tourist hotspots throughout the region.

The practice of phajaan is so cruel (nearly half of the elephants die before the crushing routine is over. Others go crazy and have to be destroyed) that numerous tour operators several years ago, led by Intrepid, began eliminating elephant ride offerings from their itineraries in protest.

September 22 is National Elephant Appreciation Day. Observed every year since 1996, it is a day to recognize these remarkable animals and do what we can to preserve them for future generations.

In honor of the day, here are five volunteer travel experiences from Responsible Travel that allow you to help elephants around the world.

Volunteer With Elephants in South Africa

Work hands-on with elephants in a conservation park dedicated to the care of both young and old, which have been rescued from the hands of humans and natural disasters.

This South Africa experience allows you to become an important member of the park team, assisting with all aspects of the work taking place including elephant care and research, preparing food and monitoring elephants to help ensure their welfare and health. Spend time at a center in Thailand that operates as a sanctuary for abused, neglected or injured animals. Volunteers here work alongside local staff to care for more than 20 Asian elephants. Each day will be different but elephant care volunteer tasks typically include feeding and giving water to the elephants, helping clean enclosures, hosing down and washing elephants and creating enrichment for them.

In Namibia, volunteers become part of an important mission, taking part in a conservation project with elephants in the Namibian desert. Participants help to track, monitor and protect wild elephants, while also working alongside local people to shield their water supplies from these majestic giants. Laos Elephant Volunteering for Over 40s

Those over the age of 40 can join a volunteer vacation to Laos where participants spend one-week volunteering at an elephant refuge. The sanctuary is in a stunning location about three hours from Luang Prabang on the edge of a lake, surrounded by rainforest and mountains. Participants help with elephant enrichments elephant monitoring, basic maintenance, and elephant care.

Participate in an award-winning approach to protecting the elephants and wildlife found in a Sri Lanka national park and local communities.

The project is unique in Sri Lanka and focuses on researching wild elephants while also working with the community to help the animals and locals live peacefully together. Volunteers help local farmers live alongside more than 300 wild elephants and other wildlife by running initiatives to reduce potential conflict.

For those who can’t travel around the world to show their appreciation for elephants, there are also actions you can take locally, among them donating to a charity that works to protect elephants. Some of the most reputable choices include Save the Elephants, the African Wildlife Foundation and Elephants Without Borders.

You can also make a point of advocating for elephants, their welfare and their protection, expressing your opinion on social media, and in other forums when elephants need your voice and your support.

For those who do participate in a related activity on September 22, share your experience on social media tagging your posts with #ElephantAppreciationDay. 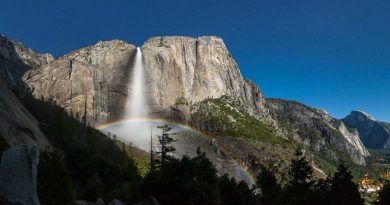 Yosemite National Park will require reservations for all day visitors from May 21 to Sept. 30