Home » Holiday guides » From Tooting to the Tirol: a family cycle trip by train

I’d like to take credit for the brilliant notion of travelling by train to our summer holiday in Italy, but it was my wife who came up with the idea. By family consensus, our two best holidays ever have involved either overnight trains (Moscow to St Petersburg and back) or cycling (along the Danube) and she had found a way to combine the two.

The kernel of the holiday was six days’ cycling along the Adige River in the South Tirol. At this point, I need to stress that we’re not keen cyclists at all. I, my wife and our children, who are 13 and 11, cycle slowly and complainingly and mostly dismount if there’s a hint of an upward slope. But on that previous trip along the Danube, we’d been won over by the sense of collective adventure. There was something wonderful about inching our way to Vienna under our own steam – staying at different hotels each night – and the unpredictable encounters along the way. What I loved above all were the days that were free of devices, but full of shared incidents, schnitzel and cake.

For the Italy trip, the tour company (Flexitreks) would provide bikes and transfer our bags to each night’s hotel, but we had to make our own way to and from the start and finish of the route. The simplest way of doing this would have been to fly to Verona, but travelling from London by train worked out slightly cheaper – and was entirely magical.

You don’t need me to tell you that British airports in August are stressful, crowded and estranging. The only advantage of flying is that it gets you a long way in a short time; no part of it is pleasurable. But at the moment the Thameslink train from south London passed through Blackfriars station, which spans the Thames, the view from the windows of the river on both sides made me feel like my holiday had begun. 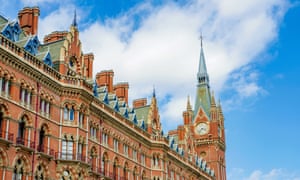 If there’s a nicer way to leave the country than by rail from St Pancras, I’d like to know about it. Twelve years after it was opened as the London terminus of the Eurostar, it still feels like a revelation, with its gothic brickwork, public pianos, bookshops and sky-blue vaulted iron ceilings. We got on the train around midmorning while, in a parallel reality, another version of me was stuck in the aisle of a plane, wishing he’d stumped up for speedy boarding so he didn’t have to be engaged in a Hobbesian struggle for space in the overhead locker while holding up his still belt-less trousers.

In Paris, we transferred from Gare du Nord to Gare de Lyon on the RER green line and then found ourselves with a few hours to wait, listening to the haunting SNCF jingle that’s one of the comforting idiosyncrasies of rail travel in France. It was raining and we didn’t quite have the time or energy to explore the city. Instead, I rustled up some essentials for the overnight trip — water, batteries, snacks — while my wife and the kids went to Le Train Bleu, the magnificent gourmet restaurant inside the station. The interior, renovated in 2014, is all gold, wood, crystal and artworks that evoke the belle époque. My family was so overcome by the opulence of the decor that they blew the day’s food budget on strawberry daiquiris, juices, ham, salami and extraordinarily photogenic macaroons.

The indispensable resource for all long-distance train journeys – and the source of our knowledge about Le Train Bleu – is the Man in Seat 61. Over the years, I’ve found him a quirky and inspiring mentor. I even used his website to figure out how to book and print out e-tickets for the Moscow-St Petersburg overnight train, which still seems like a faintly miraculous achievement. I’ll happily just browse the site, fantasising about ambitious railway journeys. The Man’s advice is to reserve the France-Italy leg early as they sell out of couchettes in summer, so we booked them in April for travel in August.

At 7pm, we boarded the red and white Thello overnight train that terminates in Venice. It’s a no-frills sleeper, not a heritage experience for people who want to hark back to the golden age of rail travel, and the price reflects that. At the height of summer, we paid €150 one-way for each adult from Paris to Verona, and €100 for each child. 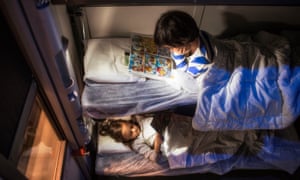 This bought us bedding, towels, some water and snacks, and a four-berth couchette compartment to ourselves. There were loos and washrooms at each end of the carriage. One of the washrooms ran out of water on the way down, but we’d been forewarned about this and bought extra water in Paris. It wasn’t an issue on the way back. More expensive berths come with their own sinks.

We arranged ourselves in the tiny space, with the kids taking the top bunks. I hadn’t eaten at all and had a sense (correct, as it turned out) that the dining car would get full very quickly, so I went down with my son and bagged a spot. We ended up sharing a table and having a nice chat with a father and daughter from Chester who were on their way to Venice. I ate pasta and drank a tiny bottle of nice Italian red, my son had risotto, and we stumbled back to the refuge of our compartment as the sun set outside the windows.

The kids listened to music on their headphones while I read and then drifted off to sleep, soothed by the cadence of the train. At some point in the night, the guard came to collect our passports, but I have only a dim recollection of it – and of his returning them around 5am. In the morning, we bought coffee and fresh pastries from the trilingual staff in the dining car before arriving in Verona just before 8am, with plenty of time to catch a local train to Bolzano. It had taken close to 24 hours from leaving our house in London to arriving at our hotel. You’d certainly get there faster by plane, but this was an incomparably richer and more memorable experience.

The cycling part of the trip also exceeded expectations. The following morning, we were collected by van from our hotel in Bolzano with our bicycles and driven to the start of the route, which is almost entirely downhill. We spent the first few days descending through apple orchards beside the rushing, clear waters of the Adige River, through pretty, predominantly German-speaking towns. 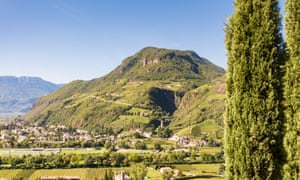 I knew nothing about the South Tirol before I went. It turned out it was part of the Habsburg empire until 1918, and still feels culturally and linguistically as though it could be in Austria. About halfway through the route, German gave way to Italian as we crossed into the Trentino region, and vineyards replaced the orchards until we made the final descent to Lake Garda.

Every part of the journey was a pleasure, with two exceptions. On the first day, my daughter spectacularly went over her handlebars after slipping on a stretch of loose gravel. Umberto and Silvia, cyclists from Milan, immediately stopped to help, as did a German-speaking Tirolean farmer with cows embossed on his leather belt. Umberto insisted on giving us his first aid kit, but my daughter, though shaken, was miraculously unscathed. The other downer was the sunburn that tormented my son almost to the point of him being willing to put on sunscreen.

A high point for me was the South Tirol Museum of Archaeology in Bolzano. This is where Ötzi the Iceman lies, 5,300 or so years after he was murdered up in the mountains. More astonishing than his leathery remains is the extraordinary array of equipment and clothing found alongside him: his straw cape, an elegant copper axe and a beautiful fur hat.

The rest of my family were indifferent to Ötzi: they took one look at the queue and decided ice-cream was better than an ice man. I was dismayed by their lack of curiosity, but in fairness the queue was a blockbuster and it was raining. (My tip is to book online the day before and skip the queue.) We finished up with three days by Lake Garda, mooching around, swimming, going out on pedalos and trying stand-up paddleboading on the lake early in the morning before the wind made it too difficult. 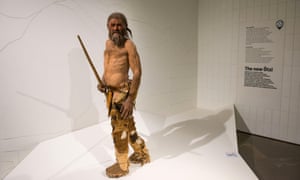 The long railway journeys that bookended our holiday sometimes tested our patience, but precious moments of togetherness, the eerie sense of the journey’s continuity from the Italian Alps to Tooting, and the interactions with other travellers more than outweighed the longueurs and alleged snoring.

My children claim to be up for an even longer journey next time, so I’ve been scouting routes on the Man in Seat 61 in preparation. He has a map showing that it’s possible in principle to go from London to Singapore by train – and even to Japan, if you’re willing to catch a boat.

Whether my family’s enthusiasm for this will survive to next summer is another question. “I’m in my teenage years,” said my 11-year-old, recently, “and I don’t want to be associated with our family.” I’m not certain our family harmony would survive that long a journey intact. But I’d be up for giving it a try.

Trippin’ out on olives: a food lover’s guide to the Peloponnese

Why America’s National Scenic Trails matter more than ever

17 Top Beach Camping Spots in the U.S.
We and our partners use cookies on this site to improve our service, perform analytics, personalize advertising, measure advertising performance, and remember website preferences.Ok