A slender carpet of slate hangs above a rocky ravine on the north coast of Cornwall, where azure waters lap at the entrance to Merlin’s Cave. It looks like the wizard has been up to his old tricks, conjuring a gossamer-thin bridge that effortlessly spans the chasm, reconnecting the mainland to the ancient ruins of Tintagel Castle for the first time in centuries.

The modern-day Merlins take the form of Laurent Ney, a Belgian architect and engineer, and William Matthews, lead designer under Renzo Piano of the Shard skyscraper in London. The pair teamed up to summon this £5m footbridge into being for English Heritage. “We had no magic spells to help us,” says Ney, whose firm has built around 100 bridges across the world, but none in such a challenging location. “It was the first time in my life that I had to design a bridge in a site that was totally inaccessible – and which was expected to disappear into the landscape.”

The rugged promontory provided the perfect place for the Cornish kings to build their fortified stronghold in the fifth and sixth centuries, when the headland was connected by a narrow isthmus that has since crumbled into the sea. The end-of-the-earth feeling also helped to fuel all the legends that have swirled around the site since the middle ages, when it was named as the place of King Arthur’s conception, prompting Richard Earl of Cornwall to build his castle there in the 13th century. This made it a tricky place to bring 50 tonnes of steel and 40,000 slate tiles – all of which had to be delivered by helicopter in five-tonne prefabricated chunks and assembled by a crane on a cable stretching right across the gulch. 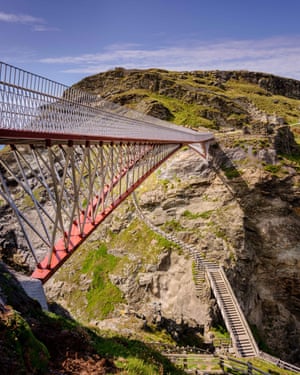 The result is a miraculously slight structure, with polished steel balustrades and diagonal braces that, from a distance, make it shimmer like a spider’s web in the dew. As you get closer, it reveals itself to be two separate structures, each cantilevered out from the cliffs – like a pair of opposing diving boards, not quite meeting in the middle. The gap, say the architects, represents “the transition between present and the past, the known and the unknown, reality and legend” – to be experienced as visitors cross from the mainland to the mysterious ruins.

In truth, it was a practical necessity, in order to avoid excessive forces meeting at the centre of the double-arched structure, but it makes for a poetic sight. Daredevils hoping for a risky leap across the ravine will be disappointed, though: the gap is only 4cm wide and the two decks are actually connected by steel cables at either side, somewhat destroying the illusion.

There has been a need for a bridge here for a long time. Ever since the 12th-century chronicler Geoffrey of Monmouth spun his seductive Arthurian tales, Tintagel has been inundated with visitors seeking a taste of the magic. Accessibility has never been its strong point. The original land bridge to the island was so slight, wrote Geoffrey, that “three men shall be able to defend against the whole power of the kingdom”. When the poet John Leland visited in 1540, he observed that the only way on to the island was “by longe elme trees layde for a bryge”, while a 1604 map labels “a draw bridge decaid” and shows a man in a red tunic struggling to scale the “verie steepe and craggie” cliffs. 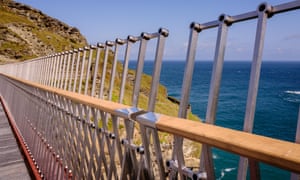 He was lucky there was no one with a buggy and screaming toddlers trying to come down in the other direction. As one of English Heritage’s top five attractions, Tintagel Castle sees almost 250,000 visitors a year, with up to 3,000 people a day at the height of summer. Before the new bridge, the only way to the ruins was via steep staircases cut into the cliffs, connected by a small wooden bridge at the bottom.

“It was always a nightmare getting people on and off the island,” says Georgia Butters, English Heritage’s head of historic properties in Cornwall. At peak times, there were waits of up to 45 minutes at either side, with school groups and pensioners regularly stranded on the protected promontory with no loos in sight. She says around a third of visitors to the small village of Tintagel didn’t even bother visiting the castle, put off by the long queues and 148 steps.

Now, with timed tickets in hand, tourists will be able to flow across the bridge’s elegant 70 metre deck of local slate tiles, which have been packed together on their sides without mortar, creating the effect of walking across a box of After Eight mints. There is a slight rattle as you traverse this mineral mat, and a subtle bounce created by fellow walkers, both of which add a frisson to crossing the 2.5-metre-wide deck 60 metres above the sea. There are nice details – thin slices of quartz embedded in the slate as well as raw oak handrails – giving it a hand-crafted quality in tune with the historic setting, and making it unlike most modern technocratic footbridges.

The polished steel balustrade can look a bit too bling as it glints in the sun, and the arrival of this shiny new structure hasn’t been to everyone’s liking. To some, it smacks of the “Disneyfication” of the site in the hands of English Heritage, which has been accused of turning the location into a “cash cow theme park” by campaign group Kernow Matters To Us (Kernow is Cornish for Cornwall). Hackles were raised in 2016 when an 8ft high bronze statue of a cloaked figure with a sword was unveiled on the island, shortly after a relief of Merlin’s face was sculpted into the cliffs below – an unthinkable act in the eyes of some critics, akin to carving the face of a druid into Stonehenge. 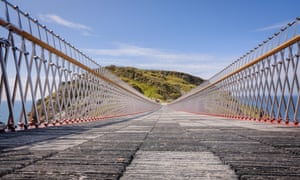 “The bridge is just the latest English Heritage vanity project,” says Cornish archaeologist and historian Craig Weatherhill. “It continues the cheap and nasty theme park approach, ruining the ambience of the site.” Weatherhill and his fellow campaigners think the focus on Arthurian legend is a distraction from the real history of Tintagel, the seat of the kings of Dumnonia, a powerful empire that stretched across Cornwall and Devon from the 5th to the 7th centuries. The number of amphora fragments found at the site, indicating vast quantities of wine and olive oil brought from across the Mediterranean, far exceeds the number found at sites across the rest of Britain combined, while excavations suggest Tintagel was larger than London in the same period. “What really rankles Cornish people,” adds Weatherhill, “is the fact they’re marketing the site as ‘English’ Heritage, when the English have had nothing to do with it.”

Butters defends the accusations of commercialisation, which have been more vocally levelled at English Heritage since it became an independent charity in 2014 and forced to cover its own costs (the bridge was part-funded by a £2.5m donation from Tetra Pak billionaires Hans and Julia Rausing). A family ticket to Tintagel now costs £33.80, while the gift shop sells a Sword in the Stone letter-opener for £40 and a model of the Knights of the Round Table for £120.

“We need to make money to look after our heritage,” says Butters. “And it’s very important that we’re not snobbish and elitist about it. We must spark the interest of the next generation in these sites, because if people don’t care about them, they won’t be preserved.”

You could argue that there has been a slightly tacky side to Tintagel ever since Tennyson fuelled the Arthurian hype with his Idylls of the King, and the railway arrived at nearby Camelford, spawning such heady visions as the Victorian pile of the Camelot Castle Hotel and the 1930s fantasy of King Arthur’s Great Halls. Amid the surrounding jamboree of legends, the sleek new bridge is a carefully judged arrival.

Grand Canyon 101: Everything You Need to Know to Make the Most of Your Visit