The Who’s celebrated album Live At Leeds was recorded in the refectory at the University of Leeds student union on Valentine’s Day 1970. The band had recently diversified with the release of the rock opera, Tommy, but this live album showcased their heavy rock side and features a 15-minute version of the 1965 hit, My Generation. The recording is commemorated by a blue plaque near the entrance to the building. The refectory is still a celebrated music venue. During the day it is a student cafeteria, but music obsessives can still wander in to admire the auditorium and drool over the wall-mounted lists of acts that played the venue over the years. In 1977 alone it included AC/DC, Sly and the Family Stone and the Byrds’ Roger McGuinn, Chris Hillman and Gene Clark.
• University House, Lifton Place, gig listings at leedstickets.com 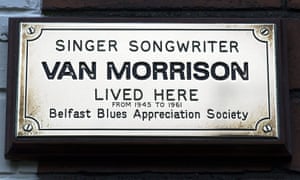 Among the terraced houses and loyalist murals of east Belfast is the childhood home of Van Morrison, a redbrick two-up, two-down whose significance is marked only by a small brass plaque placed by the Belfast Blues Appreciation Society. The surrounding streets are a touchstone for much of Morrison’s work, not least his classic 1968 album, Astral Weeks. Take a short walk uphill from his house to much posher, tree-lined Cyprus Avenue, which inspired one of his most famous songs.
• 125 Hyndford Street

Climb a staircase from the shopping precinct in the middle of Coventry and you arrive at the Central Library. This used to be the Locarno, which was frequented by the Specials and where at one point the resident DJ was Pete Waterman. Some of the tracks on the band’s first number one, the live Too Much Too Young EP, were recorded in the Locarno (by then renamed Tiffany’s) and the song Friday Night, Saturday Morning, on the flip-side of the classic Ghost Town, recounts a boozy, tragicomic night out at the club. Chuck Berry’s only UK number one record, the double-entendre-laden My Ding-A-Ling, was also recorded live in the Locarno, in February 1972.
• Smithford Way 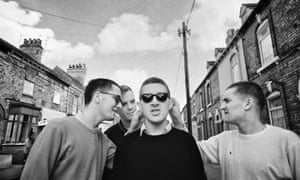 In the early 1980s, Paul Heaton of the Housemartins (and later the Beautiful South) lived in a rented house on Grafton Street, a couple of miles north of the city centre, and many of the band’s songs were written there. In June 1985, the Housemartins signed their record deal with Go! Discs on stage during a gig at the New Adelphi Club, two streets away, and their debut album, London 0 Hull 4, soon followed. The deal included three football strips for local youth team Dane Villa, who promptly changed their name to Housemartins AFC.
• 70 Grafton Street 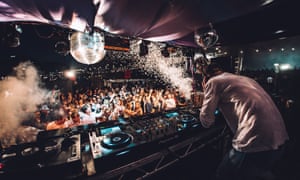 In an old brewery on the edge of Bristol’s St Paul’s neighbourhood, a short stroll from the coffee shops and bars of right-on Stokes Croft, the Lakota provides a tangible link to the area’s musical past. It hosted drum’n’bass nights by local acts like Roni Size in the 1990s, and continues to hold club nights. It’s also a useful starting point for exploring an area that was central to the development of Bristol’s music scene, from the annual St Paul’s carnival to the Bamboo Club, a reggae venue at 7 St Paul Street, at which Desmond Dekker and Bob Marley played. The Bamboo Club burned down in December 1977 – 10 days before the Sex Pistols were scheduled to perform.
• 6 Upper York Street, lakota.co.uk 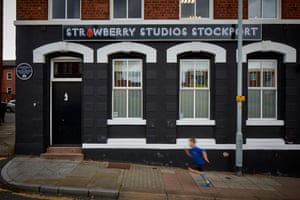 Strawberry Studios was owned by members of 10cc, who often acted as the house band for an array of artists that included Everton and Manchester City football clubs, Neil Sedaka and Ramases, a central heating engineer from Sheffield who shaved his head, dressed in Egyptian robes, and recorded the lost psychedelic classic, Space Hymns, here. As 10cc’s success grew they invested in new technology, which spurred them on to further experiment, notably the tape-looped backing vocals of I’m Not In Love. The high-tech studio became a favourite of Martin Hannett, who produced Joy Division’s debut album, Unknown Pleasures, in Strawberry in 1979. Although the building has since been converted into offices, the facade survives, recognisable by its retro Strawberry Studios sign and the blue plaque that marks the building’s musical significance. Stockport Museum (free entry, closed Mondays) ) also features a fascinating permanent exhibition about the studios.
• Waterloo Road, Stockport. 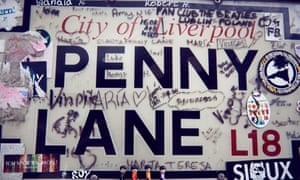 Although the Beatles’ Penny Lane is about a south Liverpool thoroughfare, the characters that populate the song – the banker, barber, fireman and nurse – wander through a streetscape that’s identifiably Smithdown Place, the junction where Penny Lane ends. On a traffic island in the centre is a strange building, a disused bistro (Sgt Pepper’s) clumsily converted from what was originally the “shelter in the middle of a roundabout” mentioned by Paul McCartney in his lyrics. The area is steeped in Fab Four lore: John Lennon and George Harrison attended Dovedale primary school around the corner, and Lennon lived for a while with his mother nearby, while McCartney sang in the choir at St Barnabas’ church, which overlooks the junction. From there, one road leads to Lennon’s Aunt Mimi’s house, another to the McCartney family home. It’s a good starting point for a journey through the Beatles’ childhood landscapes, recalled in a cluster of autobiographical songs (In My Life, Strawberry Fields Forever and Penny Lane).

“You were working as a waitress in a cocktail bar when I met you”, Phil Oakey sings on the Human League’s 1981 single Don’t You Want Me. A year earlier, he’d met Susan Ann Sulley and Joanne Catherall on the dancefloor of the Crazy Daisy nightclub in Sheffield, in a basement beneath what’s now a Sainsbury’s Local, and recruited them on the spot as dancers and backing singers for what would become the Human League’s second iteration (founding members of the band, Ian Craig Marsh and Martyn Ware had split in 1980 to form Heaven 17). The chance encounter represents a turning point for the group, leading to their third album Dare – a synthpop masterpiece – and a number one single in both the US and UK.
• 19-21 High St, Sheffield 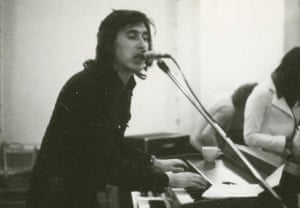 The huge influence of Britain’s art schools on rock bands is perhaps most obvious in the case of Roxy Music. Lead singer Bryan Ferry studied fine art at Newcastle University in the mid-1960s, where he was taught by the artist Richard Hamilton, who would design the sleeve for the Beatles’ White Album. Ferry’s early bands, the City Blues and the Gas Board, dealt in the gritty soul and R&B that would later be reshaped and distorted by Roxy Music. The Hatton Gallery in the university’s art school holds regular exhibitions (a show of American pop artist Roy Lichtenstein’s work runs until January 2020) and is home to Kurt Schwitters’ Merz Barn Wall, relocated from the Lake District in 1965 and on permanent display. 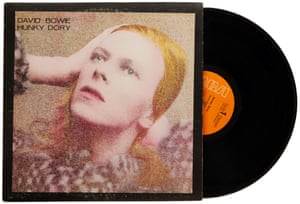 The idea for my book Hit Factories originated with the discovery of a disused record plant not far from where I live. Although it’s now little more than an overgrown, derelict site beside a DIY superstore, the RCA record plant in the new town of Washington, next to the A1 motorway and not far from the Angel of the North, was once a cutting-edge factory that produced pristine vinyl. Opened in 1970, it was visited by the young David Bowie soon after he signed to the RCA label, the star slicing a cake for the nonplussed staff, who lingered a while before returning to work. But by the mid-1970s orders had dwindled, and the plant seemed destined for closure. Its fate was averted in 1977 when the label’s biggest star, Elvis Presley, died. Production was immediately scaled up to meet demand for reissues of the King’s records, and the plant continued to operate until 1981. Local independent labels and acts had their records pressed at RCA Washington, including The Police, who visited in 1977 to pick up their first single, Fall Out.
• Armstrong Industrial Estate, Washington

Karl Whitney is the author of Hit Factories: A Journey Through the Industrial Cities of British Pop is published by Weidenfeld & Nicolson (£20). To order a copy for £17.60 including UK p&p, visit guardianbookshop.com