Birmingham – once, proudly, the UK’s “motorway city” – has announced plans to entice people out of cars and on to bikes and buses. If officials get their way, the city will be split into zones, and, rather than driving direct, motorists will have to use the ring road for all zone-to-zone journeys.

Those travelling by foot and bicycle in the new Brum won’t be inconvenienced: their journeys will be simple and – with fewer cars – safer. With cars out of the way, bus journeys will become swifter and more reliable.

The Birmingham transport plan, launched last week, was influenced by Ghent’s zone-centred traffic circulation plan of 2017. This medieval Belgian city – a quarter of the size of Birmingham – demonstrated that it was possible to switch attitudes overnight. Streets were blocked to motorists one Sunday evening and – to the disappointment of the waiting media –there was no wailing, no gnashing of teeth, no gridlock.

Motorists have since found that, while their journeys are longer in distance, they take less time because there are fewer fellow travellers on the roads. Motor vehicles used to make up 55% of trips in Ghent – that number has now fallen to 27%.

Retailers and restaurants that had warned of Armageddon discovered that takings did not plummet.

“Actually the economic situation has improved,” says the Green politician who led what had been controversial changes. Filip Watteeuw, deputy mayor of Ghent, points out there “has been a 17% increase in restaurant and bar startups, and the number of empty shops has been arrested”.

A year after the imposition of the traffic circulation plan – in news that may encourage similarly minded politicians around the world, Watteeuw was re-elected with an increased majority.

Another advantage of the intervention is that it is remarkably cheap to implement; Ghent’s plan cost just €4m (£3.4m) to implement. By comparison it costs an estimated £20m-£30m to build just one mile of motorway. 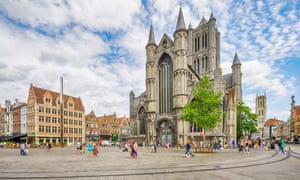 A great deal of Ghent’s traffic congestion was found to have been caused by an excess of short car journeys – as planners had accurately modelled.

“We had people complaining that a drive of 300 metres became a car journey of two kilometres,” remembers Watteeuw. “We had to explain that we don’t want people to use a car for 300 metres: they should walk.”

In Birmingham 25% of car journeys are one mile or less. Thanks to new infrastructure, bicycle use in the city is rising but from a pitiful low of just 1% of all trips. Birmingham city council wants this to rise to 5% by 2023, but if it successfully introduces its circulation plan it might be surprised by far greater success. Ghent’s plan had imagined a cycling modal share of 35% by 2030, up from 22% in 2016. Instead, after an explosive 60% rise in cycle use, the target was reached last year, 13 years earlier than planned for.

Ghent now has cleaner air: nitrogen oxide levels have dropped by 20% since 2017. It’s also a quieter city. “One resident described me as the best orchestral composer the city has ever had,” said Watteeuw.

Before the introduction of Ghent’s circulation plan, all that could be heard was the cacophony of cars, complained the resident, but “now he hears birdsong”, Watteeuw said.

“Instead of car noise,” he adds, “people can now hear each other talking and children laughing.” 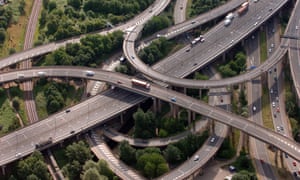 “Growth in Birmingham’s population will result in 1.2 million additional daily trips across our highways network by 2031,” she says. “Accommodating all these trips by private car is simply not sustainable.”

Road widening is off the table, she adds. It’s expensive, unpopular – and doesn’t work.

“We need to look at ways of keeping the city moving in a sustainable and efficient way,” says Jones.

Birmingham plans to remove one of the most significant incentives to motoring: car parking. Businesses will be incentivised to remove parking spaces through the introduction of an annual £500 per space workplace parking levy, and the city will build 12,800 new homes on former car parks. “Valuable land in short supply [should be] used in the most productive way possible,” the council says in its 36-page plan.

“Reducing pressure on kerb space” will “provide improved penetration and accessibility by public transport in the city centre,” promises the plan. “Public transport and cycling provision will be prioritised over car parking provision.”

The “allocation of road space will change away from single occupancy private cars,” the council says, because the priority should be “moving people, not vehicles”.

Freight deliveries will be restricted to out-of-hours, and there will be a blanket 20mph speed limit across the city’s local roads.

Birmingham must “build a future in which the car will no longer be king”, says Waseem Zaffar, the city council cabinet member for transport and environment.

Cars, he adds, are “bad for the health of ourselves and our families, bad for our communities and bad for business as measured by the millions of pounds of lost productivity caused by congestion”.

Watteeuw advises Birmingham’s councillors not to stagger any changes.

“In Ghent, we implemented the plan as a whole overnight,” he says. “It was technically and politically the easiest way.”

The Birmingham transport plan goes out to public consultation soon. Watteeuw – who received death threats before the implementation of the plan – urges the residents of Birmingham not to allow loud voices and vested interests to derail the process.

“Talk to people, but be persistent, and don’t give in on the plan’s principal benefits,” he says.

‘Nothing less than a catastrophe’: Venice left high and dry by coronavirus