Indonesian authorities have cancelled plans to close Komodo island to tourists, with the country’s environment ministry saying that Komodo dragons living there are not under threat from over-tourism.

In July, authorities in East Nusa Tenggara province said that the island would be closed for one year from January 2020 to stop tourists interfering with the natural behaviour of the largest species of lizard on earth. On Monday Siti Nurbaya Bakar, Indonesia’s environment and forestry minister, said the move was off.

According to government figures 1,727 Komodo dragons live on the island, which is a Unesco world heritage site. “[The number of] Komodo dragons on Komodo island during 2002 to 2019 observations has been relatively stable,” Bakar told Reuters. “There is no threat of a decline.”

The ban would not have affected other areas of Komodo National Park. It was announced amid concerns that increasing numbers of tourists were affecting the animals’ mating habits, with food handouts making them docile. There were also concerns about poachers targeting Komodo dragons and deer, their main prey.

The cancellation of the ban has added to a sense of confusion around the government’s long-term vision for the park. In 2018 more than 176,000 tourists visited the area. In 2018 Viktor Bungtilu Laiskodat, governor of East Nusa Tenggara, proposed targeting high-end customers with a US $500 entry fee.

“Only people with deep pockets are allowed to [see Komodo dragons],” he said. “Those who don’t have the money shouldn’t visit the park since it specifically caters to extraordinary people.”

The uncertainty sparked protests among the island’s residents. Some feared being relocated to make way for new tourist infrastructure, or losing income from visitors during the proposed ban. 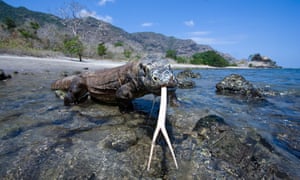 Although the ban was scrapped, the environment ministry said that changes will still occur around Komodo island. A new Komodo dragon research centre is expected to open in the park, with the ministry promising to revamp other tourist spots in the area.

The Komodo dragon, which can grow up to three metres long, kills its prey by biting it and infecting it with venomous saliva. It then lets the animal bleed to death.

Much is still being learned about the ancient lizard, which was only discovered by Europeans in the early 20th century.

In 2013, two people were taken to hospital after being attacked by a giant Komodo dragon that wandered into the office of a wildlife park in eastern Indonesia.

It is estimated there are about 5,700 Komodo dragons in the wild.

Why Oga’s Cantina is the happiest place at Disneyland’s Star Wars: Galaxy’s Edge