Home » Holiday guides » Is There A Full Moon On Halloween 2020? What To Know About The Rare Event

Autumn definitely has its perks, but if there’s one thing the world simply can’t seem to get enough of during the season, it’s Halloween. If you thought the holiday couldn’t possibly get more epic, you’d be wrong. Get ready to pause in complete and utter shock, because there is a full moon on Halloween 2020.

The spookiest day of the year is already the gift that keeps on giving, so knowing there’s a full moon happening on the very same day is everything any Halloween fiend could ever ask for. However, before we discuss the 2020 Hunter’s moon — not to mention its beautifully serendipitous debut in the skies on All Hallows’ Eve — let’s do our due diligence, especially since this holiday dates back thousands of years to the Celtic celebration of Samhain.

According to History.com, Samhain was celebrated from Oct. 31 through Nov. 1, as a way of welcoming the harvest and invoking the darker half of the year. The Celtics believed it’s the one day a year where the barriers between the physical world and spirit world dissolve.

Halloween also happens to take place during Scorpio season, which is probably the spookiest sign among the rest of the zodiac. While there’s no such thing as coincidence, you can’t help but find this more than a bit ironic. 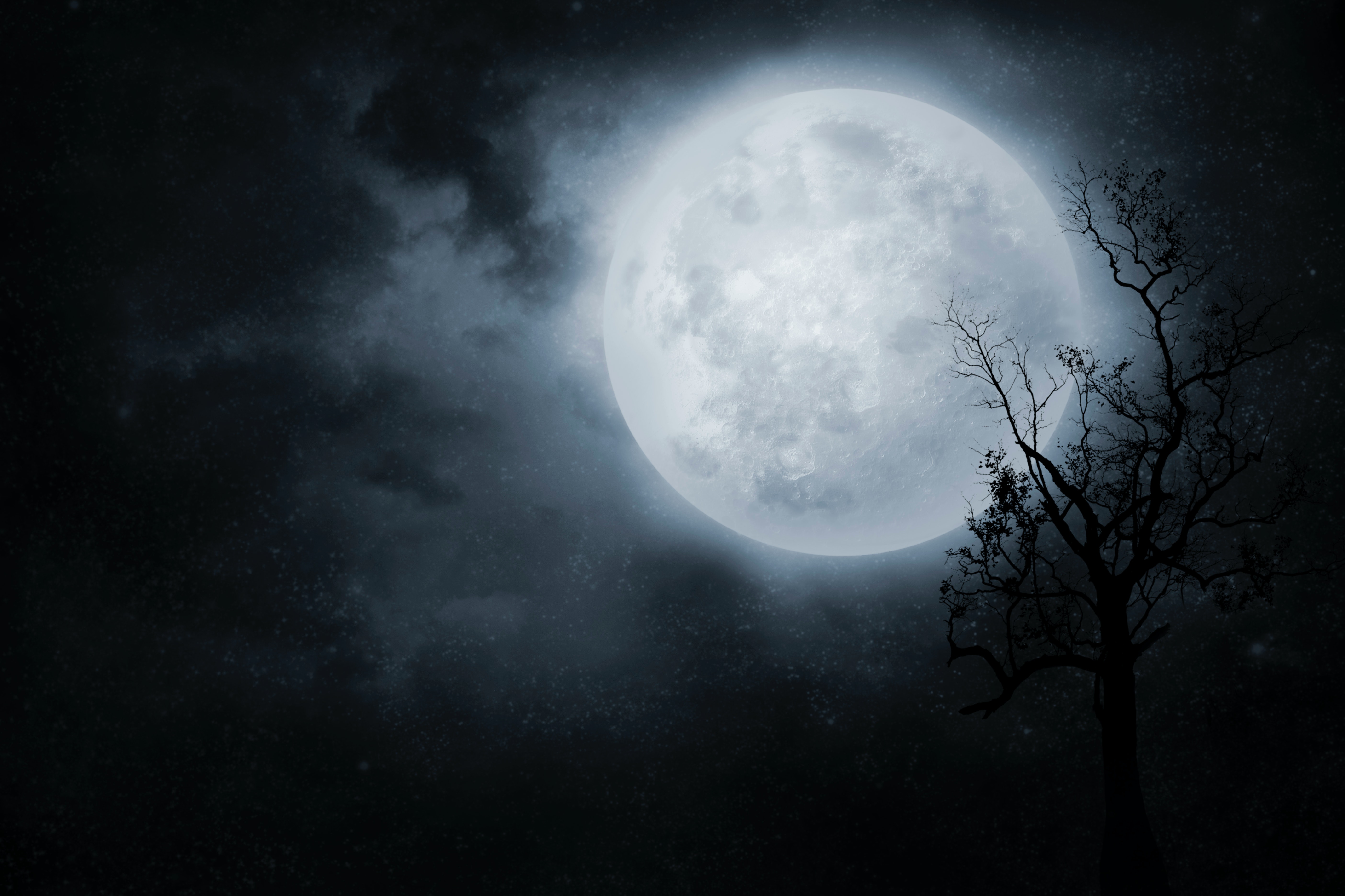 A full moon occurring on Halloween night is one of the many things that make this lunation so incredibly rare. For instance, this is the second full moon happening in the month of October 2020, which means it’s what is considered a blue moon. According to the Farmers’ Almanac, the second full moon that occurs within the same month has been called a blue moon for more than half a century. Despite the musical and emotional references stemming from the term "blue moon," it has absolutely nothing to do with the moon’s physical color. Calling it blue speaks to how rare it is for a month to have two full moons, as opposed to having one.

Similarly, it’s not every day you see a full moon on Halloween. In fact, this happens approximately once every 19 years or so, which has to do with a pattern know as the Metonic Cycle. Discovered by Greek astronomer Meton, the Metonic cycle speaks to the moon’s mysterious cycles, and note-worthy patterns. He studied the moon’s orbital period, determining that after 19 years have elapsed, the phase of the moon will repeat on the same date. This means whenever there’s a full moon on Oct. 31 — like there is this year — it will be a blue moon.

Looking at the full Hunter’s moon from an astrological standpoint, things seem to get even more paradoxical, as it will light up the sky in the sign of Taurus and conjunct Uranus. Change-maker Uranus is the planet of eccentricity, rebellion, chaos, and unexpected changes. In other words, it doesn’t get weirder than this, and I don’t say that lightly. With both the moon and Uranus in Taurus, it’s important to consider Taurus’ planetary ruler, Venus, for more context, but with Venus in Virgo, Mercury retrograde in Scorpio takes over.

The moon sits directly opposite the sun during the full moon phase, which means this rare lunation will be an emotional reflection of the sun in Scorpio’s mystery and regeneration. It will shed light on the powerful transformation taking place within and all around you. Going deeper, in typical Scorpio fashion, Pluto governs the sign of Scorpio, and Pluto is currently sitting next to Jupiter and Saturn in Capricorn. This lunation will touch upon the powerful metamorphosis taking place in the world at large. So mote it be.

No breakfast buffet and sanitising fog machines: a night in a post-lockdown London hotel