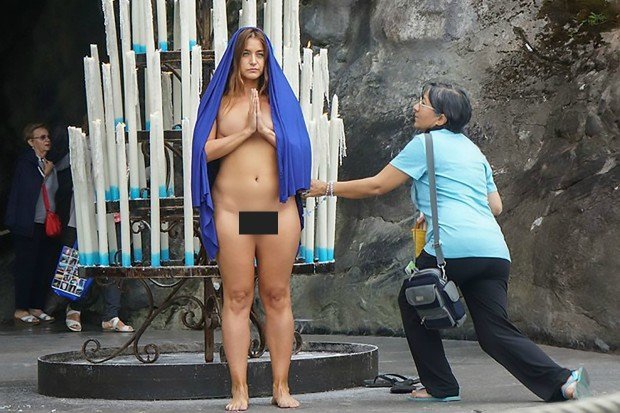 A performance artist was arrested after stripping off at a Catholic pilgrimage site.

Deborah de Robertis, who is famous for her provocative stunts, stunned onlookers by baring all in Lourdes, France.

After making the naked appearance, the exhibitionist was spoken to by police.

She has since been criticised for getting naked at the religious hotspot, although it is unknown whether she will be charged for the act.

Controversial snaps show Deborah at the Sanctuary of our Lady of Lourdes, which is located in the Occitanie region in France.

The 34-year-old naturist posed in front of the statue, which was adorned with candles.

As she placed her hands together in prayer, a stunned onlooker decided to take action.

The visitor attempted to throw a veil over the naked woman’s body, although it did little to protect her modesty.

Reports claim that Deborah was arrested by police following the incident.

She was allegedly placed in custody, before being bailed out a couple of hours later.

The performance artist has been accused of sexual exhibition and is set to face a criminal trial in May.

Prosecutor of Tarbes Pierre Aurignac said: “The police were called by people on the spot, they arrested her and placed her in custody for a few hours.

“The 34-year-old performer was ordered to attend the correctional hearing on 19th May to be tried for sexual exhibition.” 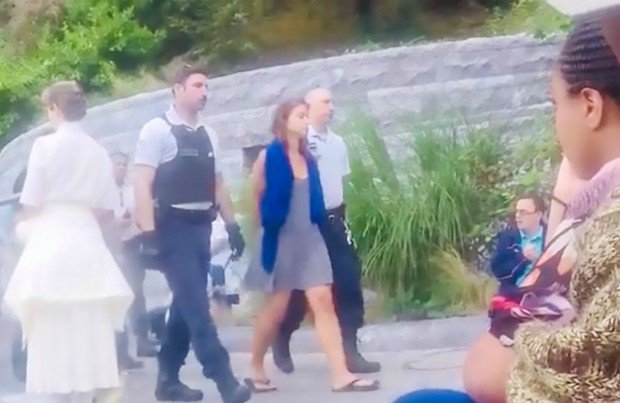 The Sanctuary of Lourdes has also commented on the stunt.

A spokesperson said: “We deplore such contempt for religious conscience and freedom of worship.”

Even though the nudist acts could get Deborah in trouble with the law, it hasn’t put her off flashing in the past.

The self-professed “feminist” took her clothes off at the Louvre Museum last October.

After stripping in front of the Mona Lisa, she faced similar court charges.

These were later dismissed as Deborah claimed her performance was intended to “question the place of women in the history of art”.

While the case was dropped, the activist was given 35 hours of community service for biting a museum guard who tried to remove her from the area.