There are many things I’ve missed about travelling in recent months, but it took a chocolate shoe rolled, high heel to toe, in hundreds-and-thousands to remind me of the simple pleasures to be found inside a European chocolaterie.

I’d spent the morning admiring Dutch greats at Amsterdam’s Rijksmuseum and was ambling along Haarlemmerdijk when the “shoes” caught my eye. Each kleine and grote “pump” (a misnomer if ever I saw one) in the window of Jordino was a different colour and finished with a rose. It was art in its most delectable, edible form.

Inside was artisanal ice-cream, marzipan shaped to look like rustic bread stuffed with cheese, exquisite dessert cups and hundreds of chocolate bonbons, all preservative-free and made at the back of the shop, the proprietor told me. 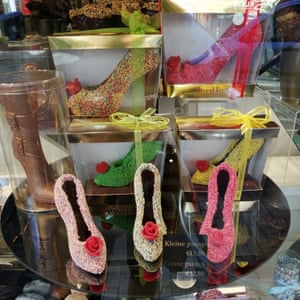 Then a portly lady sidled up to the counter and somehow nudged me aside with her ample hips. So much for safe distancing.

Travelling abroad now means unpicking the basic rules in place in your intended destination. My hotel had made this easy with a website that included a link to information about travelling on public transport. In the Netherlands the suggested distance is 1.5 metres – though I saw little of that during my two days in the city. The Dutch have been getting their hair cut and visiting museums since 1 June and public transport restrictions were eased on 1 July (masks are still compulsory). Generally, it seems, common sense prevails.

Eurostar was taking no chances with social-distancing measures at London St Pancras last week. “Stay safe, leave a space; Respectez la distance; Houd afstand” read the signs. Thursday 9 July saw the resumption of a direct London-Amsterdam service, and although Covid-19 precautions meant the train would not be full, it was busy.

On board there was no catering service or, inexplicably, wifi. Passengers were well-spaced, however, and no one removed their mask except to eat or complain about the unexplained lack of wifi. Outside the weather was grey and murky, but I couldn’t have cared less. We were in France! By the time we reached Amsterdam, just over four hours after leaving London, I was practically doing a jig in my seat. 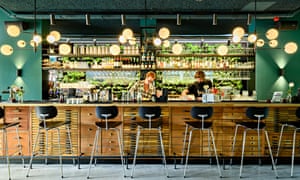 I checked into the Conscious Hotel Westerpark, which occupies a building that was oncea gas factory headquarters. From the windmills that power the handsomely restored brick building to the eco-friendly umbrellas sold in its Conscious Café, the hotel doesn’t shirk its green credentials. Post-Covid measures include a refreshing room-cleaning policy – there won’t be any during your stay, unless you request it. And if you prefer not to use a menu the restaurant has an app, or a code on the table, for ordering.

I spent the next couple of days on one of the hotel’s bicycles. In a city boasting some of the best cycling lanes in the world, that bike was my key to the city.

As in the UK, museum visits require a pre-booked time slot. I last visited the Rijksmuseum on a wet Thursday in November and enjoyed (almost) splendid solitude. It was busier now, but pleasantly relaxed.

During lockdown the museum’s Instagram feed had cheered and taunted in equal measure. Now, drinking in the detail of the Dutch masters, I found my sense of enchantment heightened, the illusion of reality in the paintings astounding. That afternoon I pottered about Haarlem, enjoyed a pint of Bock beer and swung my legs over the side of a canal, staying until the reflections of crooked canal houses faded with the light. 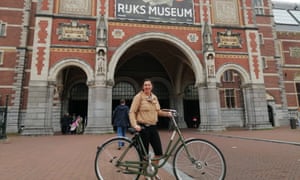 The next day my visit to the Tropenmuseum – an eclectic collection of thoughtful cultural exhibitions inside one of the city’s most beautiful buildings – took me to the east of the city. At reception I was handed a stylus for using on the touch screens. Empty when I arrived, the museum’s galleries slowly filled up. In the striking Great Hall there was a children’s mask-making class, with Indonesian batik.

I crossed the road to Dappermarkt, a neighbourhood market where distancing signs were prevalent. Here, I stumbled on Time Out Amsterdam’s “best lamb kebab wrap” (€7) and discovered poffertjes – steaming mini pancakes which I slathered with butter and apple sauce (€4).

Back on the bike, I whizzed along Singelgracht, following the waterway south across the Amstel to the Albert Cuyp market in De Pijp. Amsterdam’s busiest weekend market can be hell in high season, but not today. In the busy-ish but comfortable streets, the impact of fewer tourists in the city was clear. 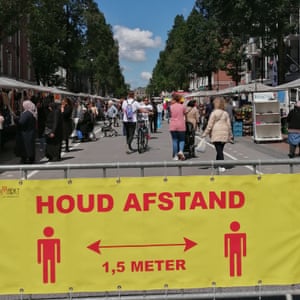 Like other cities that have suffered from overtourism, Amsterdam is now at a crossroads. The founder of Conscious Hotels, Marco Lemmers, says that in recent years the city has become “like Disneyland or Las Vegas”. He thinks it’s time to be brave and get rid of the coffee shops, the Nutella pancake stalls and the red light district from the historic centre. “Popular cities will always be popular,” he says. “You can’t stop people coming – and we want them back. But is this the type of tourist we want to attract now? We need to change our marketing and make it clear what we’re about.”

I rode my bike into the grassy expanse of Museumplein and sat on the edge of the reflection pool in front of the Rijksmuseum. A group of guys were drinking beer and playing pétanque. There were couples drinking wine, others doing yoga and a group of teenagers with a bong – all enjoying the evening sunshine. Two German women offered me a glass of wine.

Reboarding Eurostar the next day and joining a carriage full of mask wearers was a shock. I had been so intent on discovery that the spectre of coronavirus had faded and I felt thoroughly re-energised. I closed my eyes and thought of things about travelling abroad I hadn’t realised I’d missed. Cheesy chips, foreign supermarkets, unfamiliar street food, the kindness of strangers. And chocolate stilletos.

• Travel was provided by Eurostar, London-Amsterdam tickets from £39 one-way until 31 December. Direct inbound services will begin later this year (passengers currently change trains at Brussels for immigration and security checks). Accommodation was provided by Conscious Hotels Westerpark (doubles from €99 room-only excluding city tax). For information on Covid-19 in the Netherlands see government.nl

From Tooting to the Tirol: a family cycle trip by train