The pound has been going through a turbulent time since the referendum in June 2016.

Yesterday, the pound to euro exchange rate hit a low of €1.11103 to the pound amid new fears of a Brexit no-deal.

But today sterling has shown signs of recovery as the UK economic growth rebounds. 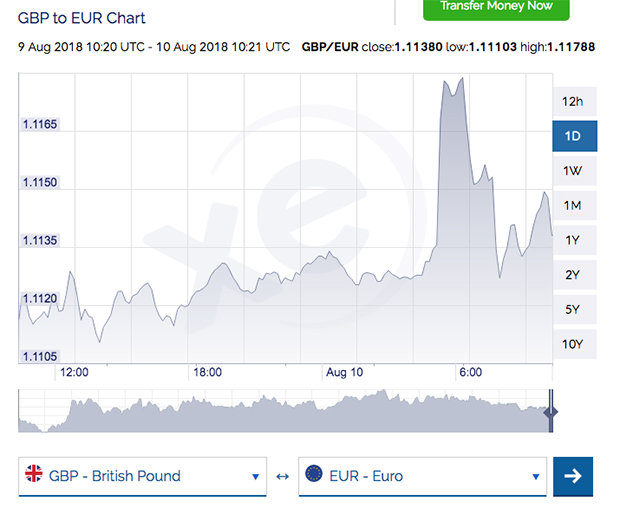 Economic growth in the UK has been boosted by the warm weather, according to the Office for National Statistics (ONS).

UK economy grew by 0.4% in the second quarter, compared with a rate of 0.2% in the first quarter of the year.

The head of national accounts at the ONS, Rob Kent-Smith, said: “The economy picked up a little in the second quarter, with both retail sales and construction helped by the good weather and rebounding from the effects of the snow earlier in the year.

“However, manufacturing continued to fall back from its high point at the end of last year and underlying growth remained modest by historical standards.

Sterling’s recovery is good news for Brits travelling to Europe this summer, although the exchange rate is still low.

How to get the best exchange rate: 7 top tips

Last summer the exchange rate hovered around €1.14 to the pound and this year it is has remained even lower at around the €1.12 mark.

Even with today’s improvements, the exchange rate is still below €1.12, making foreign holidays even more expensive for Brits than in previous years.

When is the best time to buy euros?

Writing on his website Moneysavingexpert.com, Martin Lewis discusses whether Brits should buy their holiday money now or wait.

“The problem is there is no law of exchange rate gravity, just because a currency has dropped, it does not have to bounce back,” said Martin.

“Markets move based on expectations, so if interest rates go up, but not as much as was thought, that could make the exchange rate drop.”

“Yet many other factors affect the pound’s strength – general economics, speculation, political stability and more,” he added.

It’s difficult for anyone to predict how the exchange rate will be affected in the coming months.

However, if you’re unsure when to buy your euros the money guru suggests buying half now and half later.

If you’re looking for wanderlust inspiration here are 10 secret European destinations you need to add to your bucket list.

Should fires in national parks be allowed to burn?