Home » Holiday guides » Truly, madly, steeply: a via ferrata tour of the Dolomites

I am standing on an enormous limestone plateau almost 3km up, peering over the edge of a cliff that seems to plunge all the way to the centre of the Earth. Behind me in the distance are stratified towers of rock, their tips gleaming through wisps of cloud in the morning sun. And in front of me is this breathtaking drop, the gateway to what our guide Alessio calls “the danger zone”.

Alessio stands on the edge, beckons us nearer, then says: “We’re going to have fun in here.” And over we go, white-faced and silent, feeling like we’re leaping out of a plane. But instead our boots crunch down onto a concealed ledge that rapidly leads to a heart-pounding procession of cables, rungs and ladders banged into the sheer sides of the rock, all of which have turned this soaring, rippling cliff into one giant vertical adventure park. The white faces soon turn red and sweaty, the silence gives way to gasps and loud exclamations. 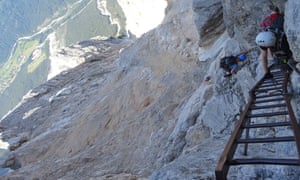 This descent, the most exhilarating of my life, was a whole new way of experiencing the Dolomites, that magnificent mountain range in northern Italy. We had walked right through this spellbinding landscape the year before, from north to south. But now, instead of heading for the passes, we were tackling the lofty peaks – an endeavour only made possible by what may well be Italy’s greatest gift to the planet: its extraordinarily numerous and utterly electrifying via ferrata routes.

Via ferrata translates as “the way of iron”, which is what these climbing aids were made of when they were first fixed to rock faces during the first world war, when Italian and Austrian troops fought ferocious battles on these mountains. Today they’re made of steel – and superbly maintained. On this spectacular stretch, known as the Francesco Berti, the via ferrata opened up what would otherwise have been a preposterously treacherous descent down, through, under and across smooth slabs, notched ridges, spiky outcrops and tottering ledges that can quickly thin to nothing. The drop was about 1km. The thrill was immeasurable.

Via ferrata works like this: you wear a harness with two leashes, each bearing a sturdy quick-release clip at the end. These you attach to the cable, always keeping at least one latched on. And that’s just about all there is to learn. There are no ropes to lug around; no nuts, hexes or other fiddly anchors to fasten to the rock; no elaborate knots to master. If you fall, the cable will catch you before you drop too far, and there’s a built-in shock absorber to stop you snapping in half, just in case. 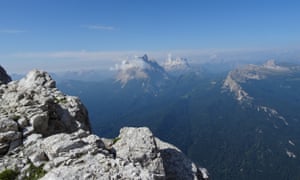 At the start, I was seeking out holds, thinking this would provide a more authentic experience, letting me feel at one with the mountain. But after about 10 minutes, I was completely at one with the cable, gripping it with both fists and even my knees – particularly when, after one ill-judged stretch, I slowly spun through 180 degrees and found myself facing outwards, feet dangling in thin air, gazing at nothing but blue skies and distant summits. The cable, I realised, is there to be grabbed.

When people gasp at your photographs, at those giddying images of you nonchalantly hanging off a pinnacle nosing up into the stratosphere, you have to fight the urge to blurt out: “It’s actually not that hard!” We’re not even climbers. We’re hillwalkers. And we’re pretty rubbish. The four of us have got lost on every big peak in the Scottish Highlands, and plenty of small ones too.

But there we were on the Giro del Sorapiss – a grade three route, according to Cicerone’s guidebook, on a scale that rises to six – each feeling like Spider-Man as we scaled up, down and along its via ferrata sections. You just get a huge amount of high-altitude bang for your buck: the chance to feel like a real mountaineer while soaking up those stunning views. From isolated peaks to sprawling saw-toothed ranges, everywhere you look there’s yet another cross-hatched, vertical colossus – all formed of fossilised coral reef thrust up from the seabed 50 million years ago when Italy battered into Europe. Corbusier called the Dolomites the greatest architecture on Earth and we were right in the heart of it. 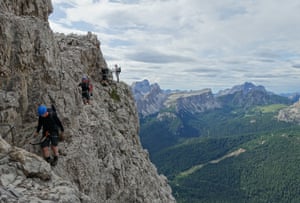 The rock formed by this tumult is perfect for climbing, which is one of the reasons why the Dolomites have the world’s highest concentration of via ferrata routes, roughly 170. But there is a downside: the routes are understandably popular, especially in summer when crowds and queues can detract from their wild character. That’s why it was great to make our debut on Sorapiss, a longer, more out-of-the-way route. The epic circuit (or giro) takes two days and includes a lengthy pair of practically sheer via ferratas: the Alfonso Vandelli lifts you up high on the first day; the Francesco Berti spins you back down on the second. “We won’t see many people today,” said Alessio as we set off. “This route is wild.” 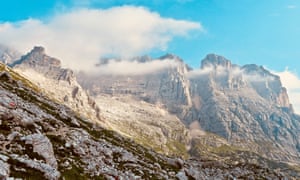 The Giro del Sorapiss is also a terrific introduction to the world of refuges, those magical hostels that pepper the trails and are a vital part of any Dolomites trip, allowing you to venture far into the mountains, hiking from hut to splendidly located hut. Some are well-equipped, others more cramped and basic, but all are unfailingly welcoming, right down to the window-boxes spilling over with alpine blooms.

You may get the odd remote refuge that lacks showers and hot water, but they’ll still manage to bring you mounds of freshly grated parmesan with every hot and hearty meal, and a pair of fancy slippers or Crocs to change into the moment you arrive and wearily pull off your boots.

We arrived in Venice, drove two hours north into the Dolomites, parked in a layby, then hiked up for an hour or so to stay first at Rifugio Vandelli, one of the more spartan refuges but very friendly. It is here that the Giro del Sorapiss begins, by a turquoise lake ringed by dwarf pine. There was a mood of trepidation in the tavern that night: maps and tips were nervously exchanged, but people kept largely to themselves, quietly playing cards and nipping out to catch the glorious sunset before turning in early. 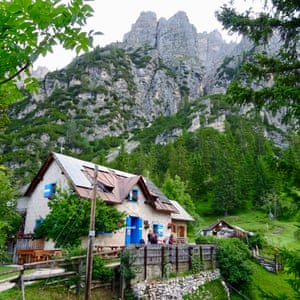 The next night at Rifugio San Marco – a gorgeous cuckoo clock of a refuge swaddled by mountains – it was party time. “How did you get on?” yelled Ed, a 65-year-old New Yorker who was walking the circuit with his son. “Did you get caught in the hail?” As we sank our beers in the garden’s fading light, we told Ed we’d dodged the brief burst of afternoon hail by sheltering under a ledge, but had then got trapped there by a flash flood cascading down the mountainside. Alessio had to rope us together and lead us through the gap behind the torrent, which would have swept away anyone in its path.

“No!” said Ed, eyes popping. He ran off to tell his son before dashing back to add: “Hey, have you guys tried the solar-powered showers? They’re outdoor and unisex – very European! And the water’s warm enough to be pleasant.”

He was right. Besides the hail, we’d had nothing but searing sun all day. But when my turn came to shower, a snap electrical storm suddenly descended, lighting up the peaks all around me in flash after flash. It might not have been the wisest idea, to stand under water pouring from a metal faucet on a tree-lined mountainside as lightning blazed, but I wouldn’t have missed that shower, or lovely family-run San Marco, for anything. 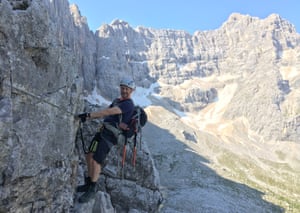 In the bar later, the refuge’s guitar was passed around and, as an enthusiastic cross-language singsong developed, a group of Italian hikers began doing magic tricks and asking us for Scottish tunes. Platefuls of steaming goulash and bolognese soon followed, rounded off with sublime strudel, grappa by the ladleful, and louder singing.

Alessio had been wary when I first floated the idea of finishing our via ferrata odyssey with a Dolomites classic: the mighty Punta Anna, a hair-raising grade five route right up the face of Tofana di Mezzo, which rises ridiculously steeply to a whopping 3,244 metres. But having been with us on Sorapiss, he relented and, after a short drive and a hike, we found ourselves strolling into Rifugio Pomedes, near the Punta Anna starting point. 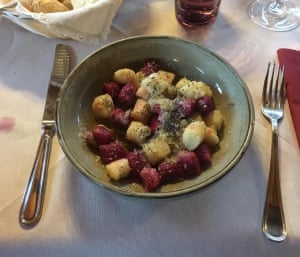 A much larger refuge, Pomedes couldn’t match San Marco for charm, but it did have compensations: en suite rooms; a menu boasting beetroot gnocchi brushed with poppy-seed butter; and a stuffed squirrel doing via ferrata up its foyer walls. “Your face looks familiar,” we overheard one climber say to another out on the terrace. “Didn’t we meet on the Matterhorn?” Clearly, we had entered another level.

In the morning, the route – exposed, airy and a good deal more technical – shot us straight up the cliffside, with big reaches, crazy drops, sketchy footholds, and quite a few heart-stopping sticking points. After the five most adrenaline-fuelled hours of our lives, we reached the top of Punta Anna and broke out the whisky for a celebratory nip in the rarefied air. 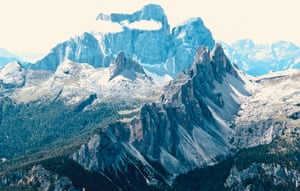 “How do we ever beat this?” we asked Alessio, looking out, or rather down, at the massive mountains all around. After some thought, he reeled off an itinerary that included Coldai, Civetta and – gleaming pink just to the west – the staggering Tofana di Rozes, the pearl of the Dolomites, which was once roamed by wild horses. “Can I pay now?” I said.
• Car hire for the trip was provided by Europcar, which hires economy vehicles from Venice Marco Polo airport from €18 a day, and compacts from €25.

How to do it

Guide and kit
Alessio Nardellotto works for Dolomiti Ski Rock. Prices start at €250 for a day’s guiding on via ferrata and €600 for the two-day Giro del Sorapiss. Prices vary with group size and include kit and rescue insurance. If you want your own kit, Snow+Rock’s Edelrid Via Ferrata Cable Kit (£85) is excellent, with instant easy release; pair with its Black Diamond Solution harness (£70). The map we used was Tabacco 03, Cortina d’Ampezzo e Dolomiti Ampezzane (£11.99). The guidebook we used was Cicerone’s Via Ferratas of the Italian Dolomites Vol 1 (£17.95), but don’t do Sorapiss anti-clockwise as it suggests. Go clockwise and you’ll hit the via ferrata in the morning when you’re fresh, it’s cooler, and there’s less chance of bad weather.

Getting there
Train from Verona to Bolzano from €9. Details of trains to Italy from the UK from the Man in Seat 61. Or fly to Venice from several UK airports.

Delta’s Flight Experience for Children with Disabilities is Awesome