Southwest Airlines is holding their annual shareholder meeting in Denver today, but they’re not being met with a lot of “luv.”

Airport workers from Los Angeles, San Francisco and Denver airports are protesting at the meeting with protest signs that play off Southwest’s “Luv” branding. Signs like “Show us some LUV: health care, fair wages, union rights” are being held by protestors. Spoof versions of Southwest’s drink coupons are being handed out to the public, inviting them to tell Southwest’s CEO Gary Kelly that #PovertyDoesntFly.

What are these airport workers upset about? They say Southwest isn’t providing proper safety training and is standing in the way of fair pay, benefits, and the right to form a union to a portion of its employees, particularly baggage handlers, wheelchair attendants, security officers, cabin cleaners and other service workers.

According to SEIU, or Service Employees International Union, a labor union that fights for the rights of contracted airport workers, the problem goes back to when Southwest contracted out what was once great union jobs to companies like S.A.S. Service Group and Prospect. They claim that S.A.S. has been cited for nearly $1 million in wage theft at Los Angeles International Airport, and Prospect has asked wheelchair attendants to fill in for other staff such as by handling baggage with firearms without any safety training.

“As a wheelchair attendant, I ensure the safety and mobility of passengers navigating our busy airport,” says Medina Adem. “On top of that responsibility, my coworkers and I have been forced to move oversized baggage and luggage containing firearms, jobs we were not hired to do nor trained to do. With a union, we would have a voice on the job to call for the training we need to keep Denver workers and travelers safe.”

Maria Romero, a security officer at LAX, echoed Adem: “I’ve worked for thirteen years doing security work. But when Southwest Airlines switched our jobs to a company called S.A.S. Services, we lost our seniority and the stability of knowing what jobs we’re being asked to do day to day. We even lost most of our health insurance.”

She added, “This has had a big impact on my ability to afford my prescription eyeglasses, which I need to monitor security cameras. Passengers are depending on our ability to see details, so why won’t they cover us to have updated eye prescriptions?”

As of now, Southwest allows 83 percent of its employees the right to a union. The remaining individuals who are not allowed to unionize are baggage handlers, skycaps, wheelchair attendants, safety checkpoint officers and other passenger service positions. These employees are made to work as subcontractors for the airline and suffer greatly in pay and benefits.

In a survey conducted by SEIU, they found that contracted airport employees – regardless of a specific airline – live in households that make less than $25,000 a year and more than a third are Latino, a quarter are African American, and nearly half were born outside of the U.S. While many believe that airport jobs are great jobs, being subcontracted by contractors like S.A.S. Service Group is keeping many of these employees of color and their families under the poverty line. 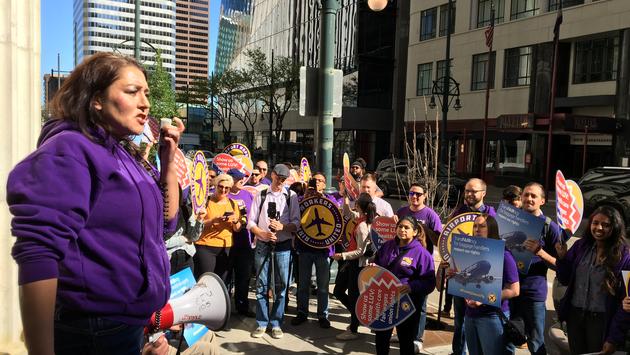 SEIU argues that without these airport workers, Southwest couldn’t have conducted their operations, made $2.5 billion in profit last year and grown in size and routes.

Today’s protestors aren’t the only ones calling on Southwest to deliver a living wage, paid family health care and the right to a union for all Southwest employees regardless of their position. California lawmakers have their eye on the airline and want them to step up and do the right thing especially since they took more than $41 million in taxpayer money in 2017 from California’s State Travel Program. Lawmakers argue that public funding comes with public responsibility.

“It’s not acceptable for any amount of public money, let alone millions of taxpayer dollars—to be used in any way that drives down worker standards, costs employees their healthcare, pushes workers beyond their reasonable limits and increases turnover at the airport,” said California State Senator Maria Elena Durazo. “We know the companies that benefit from the California Travel Program—including Southwest Airlines—can do better.”

A petition has been circulated among airport workers over the last few months that asks Gary Kelly to change the airline’s policy for these forgotten workers. It should be presented at the meeting today.

Tim Maddox, an African American wheelchair attendant at LAX, will be at the Southwest shareholder meeting today as well, speaking up for his fellow airport employees.

In an essay on Think, he explained why it’s so important for airport employees to fight for their right for a fair wage, benefits and the right to unionize, as well as why it should be important to airline passengers, too.

“America’s strength comes from people’s ability to work together, regardless of race or geography. But today, greedy companies around the world are trying to divide us based on what we look like, where we come from or how much money we have,” he said. “Airport workers like me won’t stand for it any longer — and neither should the airline passengers who we help keep safe, clean and on time to their destinations.”

Boeing Will Pay $4.9 Billion to Airlines That Had to Ground the 737 Max