Home » Transport » America’s favorite airports, and how they got that way

Even with record-high passenger volumes to deal with and a plethora of major terminal construction projects underway around the country, U.S. airports are doing a bang-up job of pleasing passengers.

That’s the major takeaway from the 2018 North America Airport Satisfaction Study recently released by J.D. Power, which ranks everything from airlines and airports to electronics and cars.

The study says travelers’ overall satisfaction with airports is at a record high, based on factors such as terminal facilities, airport accessibility, security check, baggage claim, check-in/baggage check, and food, beverage and retail.

Of course, some airports rank higher in the study than others. And when we quizzed operators of the “winning” airports about the secrets to their success, “a commitment to customer service” emerged a universal theme, but so too did a keen, good-hearted sense of competition.

Orlando International (MCO), Florida’s busiest airport, credits its return win to “a seamless arrival and departure experience that exceeds the needs of the traveler and instills a memorable imprint of the culture and environment of the region.”

The airport is on schedule with a $4.27 Capital Improvement Plan and has completed a variety of “passenger-pleasing” projects ranging from improved Wi-Fi and baggage systems to a people mover system that transports passengers over waterways and landscapes that evoke the Florida sense of place.

When McCarran International Airport (LAS) landed in the No. 3 slot in J.D. Power’s “mega” category last year, Rosemary Vassiliadis, Director of Aviation for Clark County, Nevada, gathered her team together to strategize how to move up to first place.

“It’s personal for us,” said Vassiliadis. “Las Vegas is a destination city and our airport offers the first and last look for almost 50 percent of the people who visit. We want to let them know how much their visit means to us.”

To gain its first-place tie this year, LAS teams focused on upgrading terminal spaces, smoothing out checkpoint experiences and perfecting the “You’re in Vegas” vibe that includes slot machines, a neon “Welcome to Las Vegas” sign, and a curated “Voices of Vegas” taped music program highlighting iconic Vegas acts and songs that name check the city.

And while she’s fine with McCarran sharing the top spot in the “mega” category this year with Orlando airport, “Next year we want to be the only No. 1,” said Vassiliadis.

At Denver International Airport, which placed fourth in the “mega” category this year, the secret to success is always looking for ways to “surprise and delight passengers,” said airport spokeswoman Emily Williams.

DEN offers everything from a Canine Airport Therapy Squad (that includes a cat) to airport events in an outdoor plaza that have featured a beer garden and an ice-skating rink.

And during its current terminal renovation project, DEN is having success delighting passengers with a series of “Pardon our dust” messages that embrace the conspiracy theories and rumors of alien inhabitants that date back to 1995, when the airport opened. 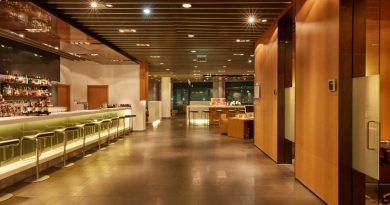