DENVER — Only a thin veneer of dry snow, perhaps an
eighth of an inch deep or less, covered about half of a nearby runway on a
recent Tuesday morning as Denver Airport assistant operations manager Kevin
Stahley toured the west airfield.

“You can tell it is pretty dry out here,” Stahley said
proudly. “That is what our snow teams do.”

Over the previous 20 hours or so, the airport had received 3
inches of snow, a relatively modest total by northern Colorado standards. But
over the week that was to follow, Denver would be hit by three more winter
storms, which would drop another 8 inches of snow across the 52 square miles of
property that comprise what is, in terms of physical space, the country’s
largest airport.

Denver’s average annual snowfall of 57 inches trails only
Cleveland and runs neck-and-neck with Salt Lake City among cities with the 50
largest U.S. airports by passenger traffic. But with Denver Airport having six
runways compared with the four in Salt Lake City and three in Cleveland, the
airport could make a good argument that it has the largest snow-clearing burden
in commercial U.S. aviation.

Still, despite the notorious volatility of weather in
the Rocky Mountains region, snow has caused just four closures in the 25-year
history of the airport.

The most recent was the seven-hour closure caused by the
powerful bomb cyclone last March, during which airport winds gusted to 80 mph,
while 7 inches of snow fell. 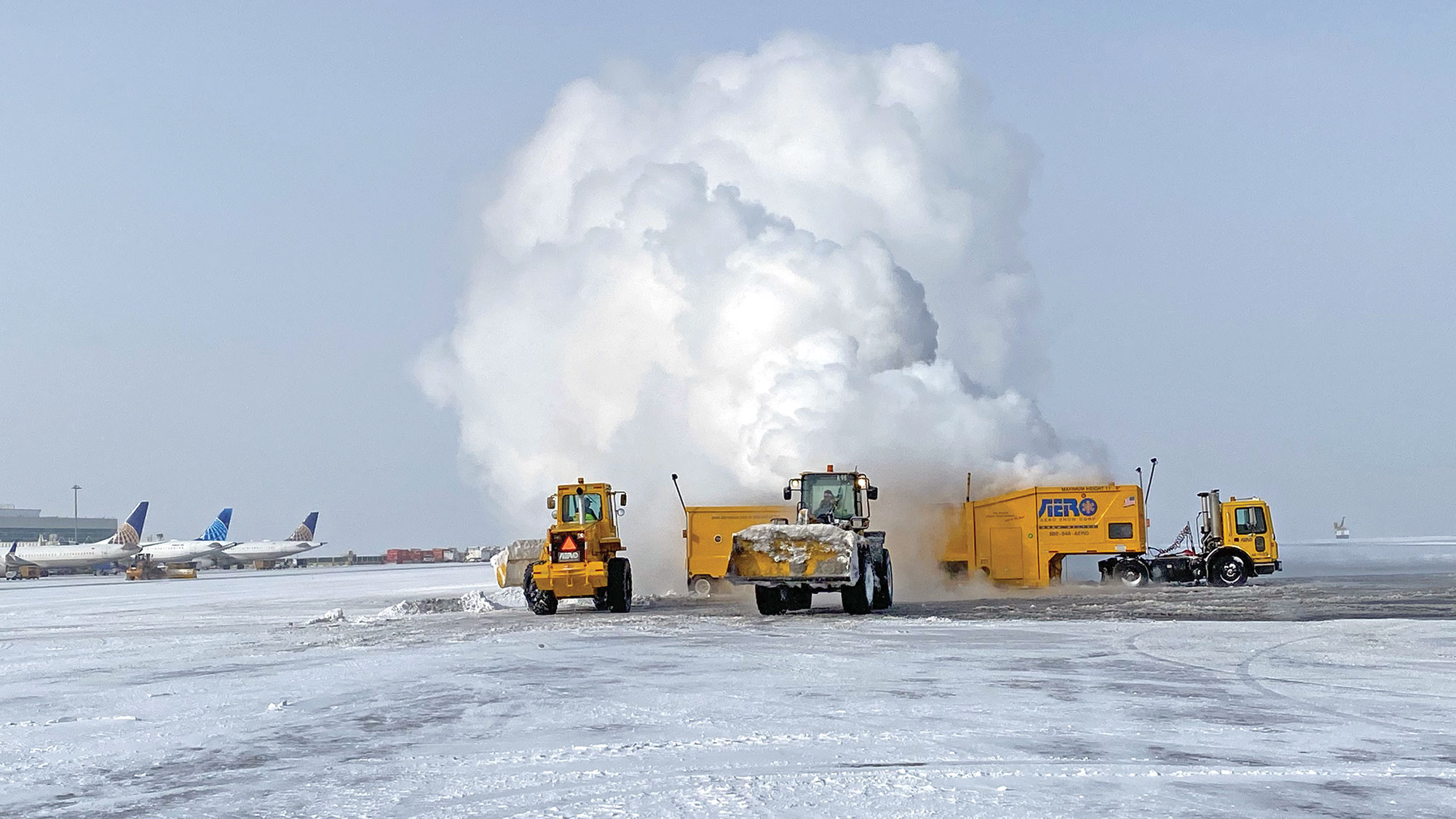 But the toughest closure was one that lasted 22 hours over
the 2006 Christmas holiday, said assistant director of airport operations Lisa
Gahm, who has been at Denver Airport since it opened in 1995.

It was that storm, in fact, that convinced the city of
Denver that it needed to enhance the airport snow operations with a new fleet
of multipurpose plows, which combine traditional plowing capability with snow
sweepers and blowers. As a result, the airport now claims to clear its runways,
which are more than 2 miles long, in an average of fewer than 15 minutes, three
times as quickly as before 2006.

A handful of those plows were still at work as the snow
tapered off on the morning of Feb. 3, clearing off portions of the east
airfield ramp. Stahley followed behind as the $640,000 machines ambled forward,
using their sweepers where the snow was shallowest and deploying their plows
where slightly more snow remained.

Around the airfield, other clearing operations were also
underway. In a more central ramp location, smaller plows loaded snow onto
melting trucks. Large plumes of water vapor rose into the air as snow hit the
melter, which is capable of melting 600 tons of snow per hour.

De-icing pads also remained busy, spraying glycol on the
wings of aircraft readying for departure. Though Denver Airport provides the
de-icing pads, it is the airlines that actually undertake the task, averaging
16 minutes per plane.

Back in Stahley’s vehicle, meanwhile, the assistant
operations manager pointed toward a closed runway where colleague Sarah Steves
was conducting a safety inspection.

Using a truck outfitted with a special monitoring tire,
Steves measured the friction between the tire’s rubber and the runway’s
concrete.

Moments later she called out the code 555 across the radio,
indicating that the runway was safe.

Gahm explained that the airport’s operations and field
maintenance teams typically begin coordinating for a snowstorm 12 to 24 hours
ahead of its predicted arrival. For the biggest storms, at least 90 workers are
mobilized.

Stahley said that he and many on his team actually enjoy the
all-hands-on-deck excitement that snowstorms can cause. “It’s absolutely
entertaining,” he said. “I look forward to it.”